Atomic Operation Classes in JUC and Their Principles

Yesterday we looked briefly at the use of Unsafe. Today we look at how atoms in JUC use Unsafe and how they work!

Also remember that in the last blog we used the volatile keyword to modify a variable of type int, and then two threads did 10,000 + 1 operations on the variable, and the result wasn't 20,000. Now when we change to AtomicLong, you will see that the result is always 20,000!Interested ones can try it, code as follows

After JDK 1.5 in java, a package, JUC and package, full name is java.util.concurrent, we should have heard of a class ConcurrentHashMap, this map is interesting and interested to see the source code!There are many classes that need to be used in concurrency, such as AtomicInteger, AtomicLong, AtomicBoolean and so on. Actually, they are all similar. This time, let's take a brief look at AtomicLong, and several other classes are similar.

Then let's look at AtomicLong's + 1 operation and see if it uses the unsafe class, just look at the getAndAddLong method

The method getAndAddLong contains CAS operations. It can be seen that if multiple threads call the incrementAndGet method to + 1 at the same time, only one thread will operate at the same time, while the others will continuously use CAS to try to + 1, and each time they try, they will go to main memory to get the latest value.

Interesting to see the other AtomicLong methods, many of which are the same, CAS is the core

3. The inadequacy of CAS and the recognition of LongAdder

From the example above, we can see that when using the AtomicLong class under multiple threads, only one thread can use that shared variable at the same time, and all other threads are in an infinite loop, which also consumes performance. If there are more threads, many threads are in their own infinite loop, or called multiple threads are spinningEach thread is spinning countless times really is a pit, consuming performance, we can find ways to spin a certain number of times, the thread will end up running, interested can understand the spin lock, in fact, this is such a principle, easy, haha!

After JDK8, a better class was provided to replace AtomicLong, LongAdder. It was said that only one thread was using that shared variable at the same time, and all other threads were spinning. If you could split the shared variable into multiple parts, could multiple threads operate at the same time?Then when the operation is completed, it can be combined again, with a little idea of dividing and treating, dividing and controlling, and finally combining.

How do we split that shared variable into parts?

The picture below shows 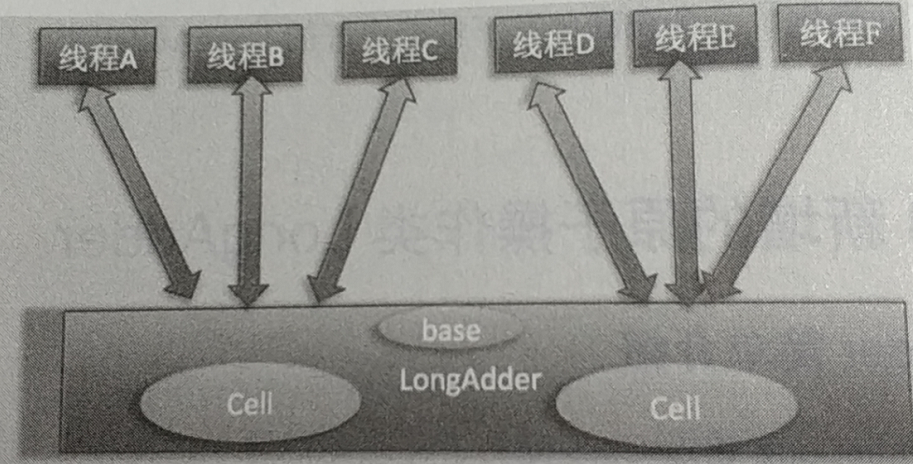 In fact, the usage is similar to AtomicLong. If you are interested, you can try it. The result is always 20000.

You can see from the above that a base can only be one, and there may be more than one Cell, and too many Cells are also memory-intensive, so Cells are not created at first and are created only when needed, also known as lazy loading.

We know that LongAdder inherits from Striped64

There are three fields in the Striped64 class, cell arrays for storing multiple cells, one for base not to mention more, and one for cellsBusy to implement spin locks. The status can only be 0 or 1 (0 means the Cell array is not initialized and expanded, nor is the Cell element being created, otherwise 1). This is used when creating cells, initializing the Cell array, or expanding the Cell arrayThis field guarantees that only one thread can perform one of these operations at a time. 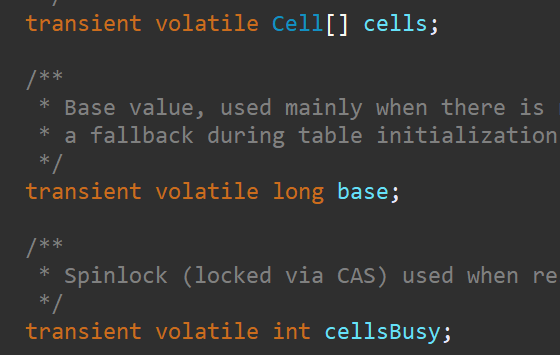 1. Let's take a brief look at the Cell structure

For the above, it is interesting to see how to find the specified Cell. In the a = as [getProbe() & m] above, where M = the length of the array - 1, it is also a redundant operation here, and getProbe() is used to get the threadLocalRandomProbe of the current thread (current local thread detection value, initial value 0), which is actually a random number.The first call to this method is the first element of the array. If the first element of the array is null, then no corresponding Cell is found.

Now let's focus on the longAccumulate method, which has a long code, so take a look at it separately

In fact, the longAccumulate method is to initialize the ell array when multithreaded, add cell elements and expand operations, and when one thread matches the Cell element, recalculates the random number when another thread finds it is in use, and then continues to match the other ell elements. Nothing particularly difficult!Not to mention that it's a long way to do these things

The core of this article is CAS. Let's briefly talk about the self-growth of AtomicLong, an atomic operation class. However, when there are many threads, there is a big disadvantage of using CAS. One thread is executing at the same time, all other threads are spinning. Spin consumes performance, so you can use a LongAdder class provided by JDK to replace it.Optimizes the values in AtomicLong to be a base and a cell array, where multiple threads compete. Assuming that the number of threads has the same number of CPUs, then each thread has a separate CPU to run, and then matches individually to an element in the cell array. If there is no match, the cell array will be initialized; if Ce is matchedIf the elements in the LL array are in use, it will take a long time to decide if a new Cell drop array can be created. If the array is full and the number of arrays is less than the number of CPUs, the expansion will take so long. If the expansion is over, or if the location in the matched Cell array is in use, then the conflict will be recalculated, using the remainder of a new random array and array.Get a new index and access the location of the corresponding Cell array.

It's still interesting to look at it carefully!