In order to prevent readers from misunderstanding, this article is a personal practical note on setting up a redis cluster on a mac. The author is a mac system. Although many operations are similar to Linux, there are differences and many holes. This tutorial can also be used as a reference for setting up a redis cluster on a Linux docker. Finally, if you have any questions, welcome to discuss.

Tip: this tutorial is applicable to linux and mac systems, but it should be noted that the / usr/local directory in the mac system is actually closed by the mac and cannot be used for configuration. Although configuration files can be forcibly built through sudo, inexplicable situations will occur. This article will also list personal stepping points, hoping to help students who also use the mac system avoid the pit.

A clever woman can't make bricks without rice, so she has to install a docker on the mac first.

I currently use the mac as the main computer, so all demonstrations are completed on the mac. Of course, the download only provides the download address of the mac. First, I need to go to this website to download, https://docs.docker.com/deskt....

Since the foreign docker is really slow, you need to switch to the domestic image warehouse first, and finally use the image address of Netease: http://hub-mirror.c.163.com . In the taskbar, click the Docker for mac application icon - > preferences... - > daemon - > registry mirrors. Fill in the accelerator address in the list. After modification, click apply & restart, and Docker will restart and apply the configured image address.

The new version of docker only needs to change the relevant json configuration of docker engine. For example, the following is the result after replacement, which is also a stepping point. Most of the tutorials on the Internet are old versions of docker. I haven't found it for a long time = - =: 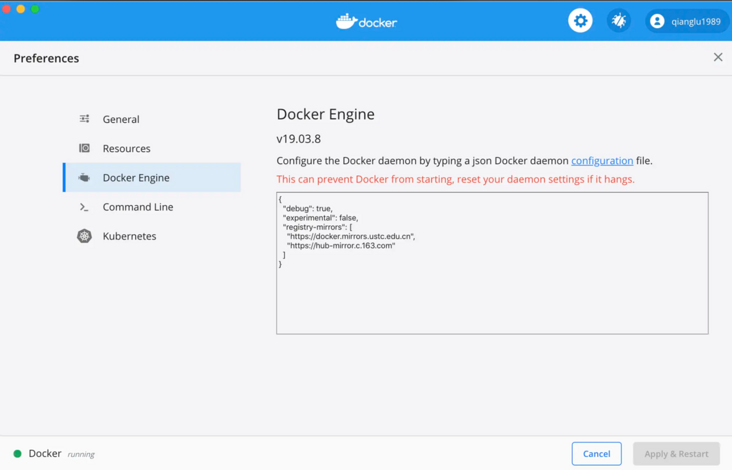 Single machine deployment is very simple. You only need the following commands:

/usr/docker/redis/myRedis/redis.conf: it needs to be changed to the address of the configuration file you need to map. Similarly, the data file needs to be modified accordingly.

First, you need to ensure that the above contents have been processed. Then you can install redis. The installation process is as follows:

seq 6000 6005: you can specify the traversal port yourself. Here are just six redis instances, that is, the default three master and three slave mode.

The effects after generation are as follows. You can see that configuration files and data directories from 6000-6005 are generated, which is the basic configuration for building clusters:

If you open one of the configuration files, its contents are as follows. Here you can compare the previous template configurations to understand what has been changed:

Then, in the current directory, we can create a script file start.sh and execute vim start.sh. After the script is written, use the shell command to execute as follows: sh start.sh run the script.

Let's focus on the following. As mentioned earlier, the / usr/local/src directory of the mac system is not accessible. Although sudo can be used to forcibly create or modify files, it is not a matter of permissions. The mac closes this folder and does not recommend operations in this folder, so the following commands are only applicable to the Linux system.

To solve this problem, I made the following adjustments in the mac system (the folder contains some personal information and has been processed):

The following is an explanation of some parameters:

The cluster is built as follows to verify whether it can be used. Of course, / usr/local/bin here uses the corresponding storage location of configuration files.

Note that you need to change the ip to the ip configured in the previous template, otherwise it cannot be started

Then we run docker ps and the following results appear. In addition, there may be an error message because the port is not open, but because I built it locally, this problem does not occur:

8. Verify that the cluster is available

Finally, we verify whether the cluster is successfully available by connecting to a node:

Then enter redis cli (ip is your server ip)

Finally, actually input a few simple commands to verify whether it can be segmented and distributed to multiple machines for processing

Cluster mode connection: the following example shows that the operation is normal (first exit the current redis cli, and then execute the following code. The ip is your server ip).

Turn off the system firewall

Write at the end

There are many contents, and the probability of success at one time is not very high. If you have any questions, please comment.