How to Use LaTex (Foreign Language Journals of Science and Engineering)

A while ago, I learned LaTex by myself. I feel that when I write a paper, I can really focus on the text. I don't need to work as hard on formatting as word. It's very silky. Write a document for future archives.

My learning process is to install LaTex compiler software (Texpad for macOS) according to the B-site tutorial ⇒ \Rightarrow Learn basic structure and grammar based on video ⇒ \Rightarrow Reproduce an IEEE Access paper (this is the most important step I think, simply listening to classes and taking notes can not understand the problems that may be encountered in the actual writing process)

In addition, there are some reference resources, and I will point out the instructions separately in each section.

With the popularization of LaTex, LaTex compiler software has become more and more in recent years. It is recommended to do more research on platforms such as CSDN, B station, etc. and choose the one that you think is most appropriate. I chose Texpad Win and Mac have the main advantages of clear and concise interface, real-time compilation (this is really unbeatable explosion convenience), good auto-fill function, and better support for Mac without too complex configuration. The specific configuration process can refer to the B-station video: The perfect Latex editor for MacOS! Texpad resource sharing and introduction! If there are any errors, it is recommended to go to CSDN and try not to Baidu. Many of the statements on Baidu are very unreliable. 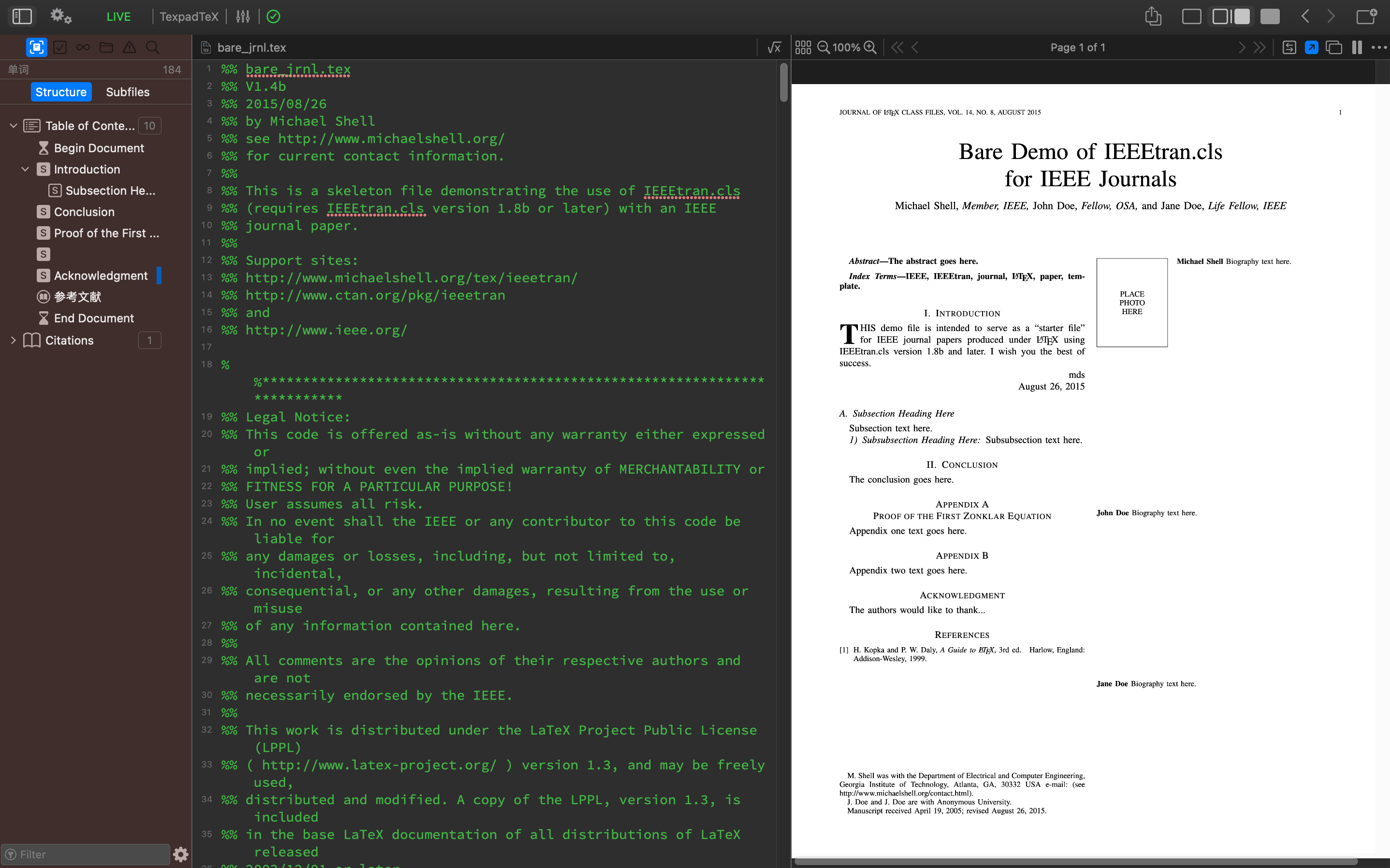 Here I have opened a template, and the upper left corner of the dialog indicates that the compilation passed. Everything is OK ~

In the foreword, it is mentioned that several websites can download templates. These websites cover templates for many journals, but it is safer to download the latest official templates directly to the official website of the journal you want to contribute to, in order to *** IEEE Access *** For example, operate as follows: 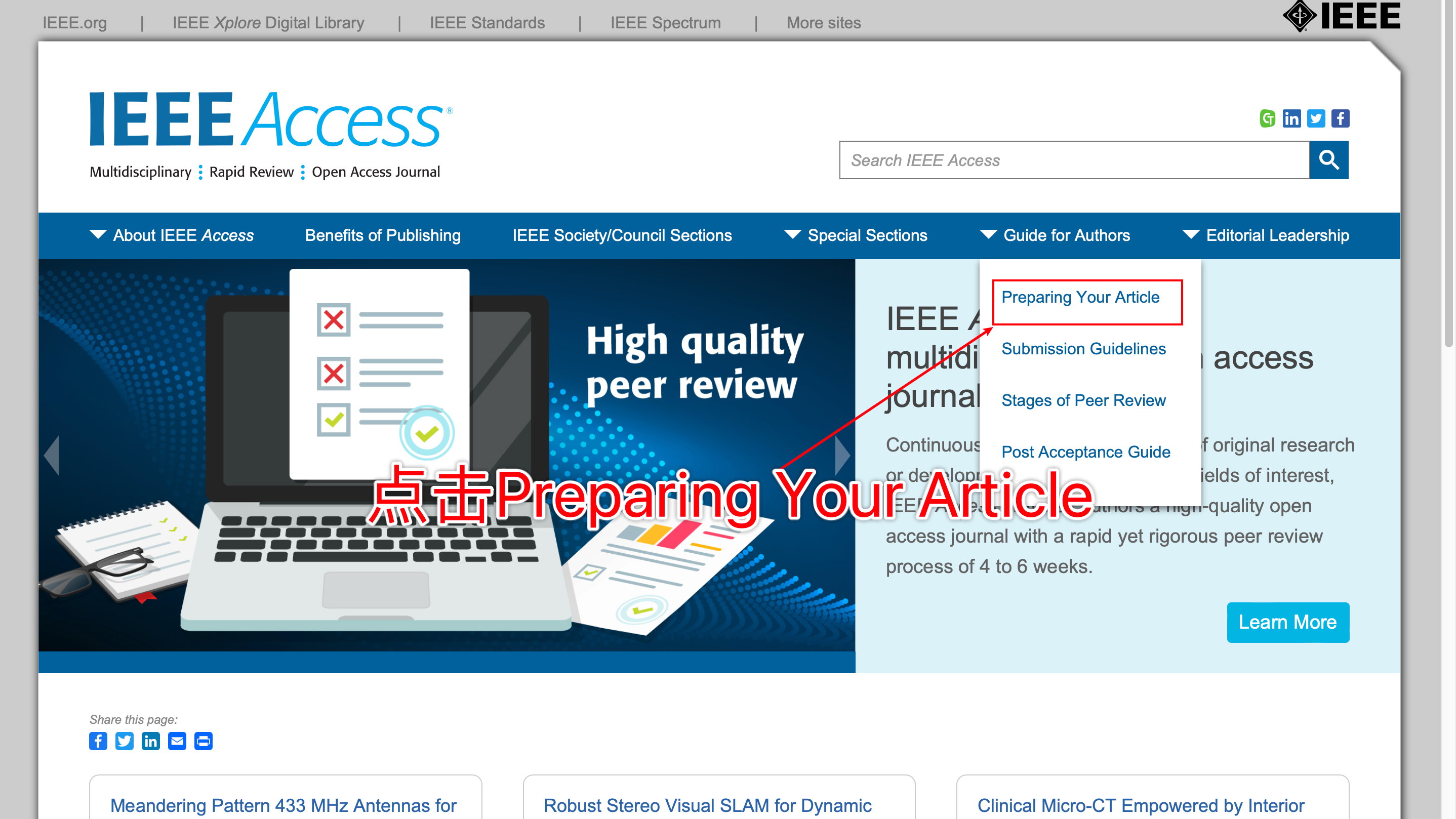 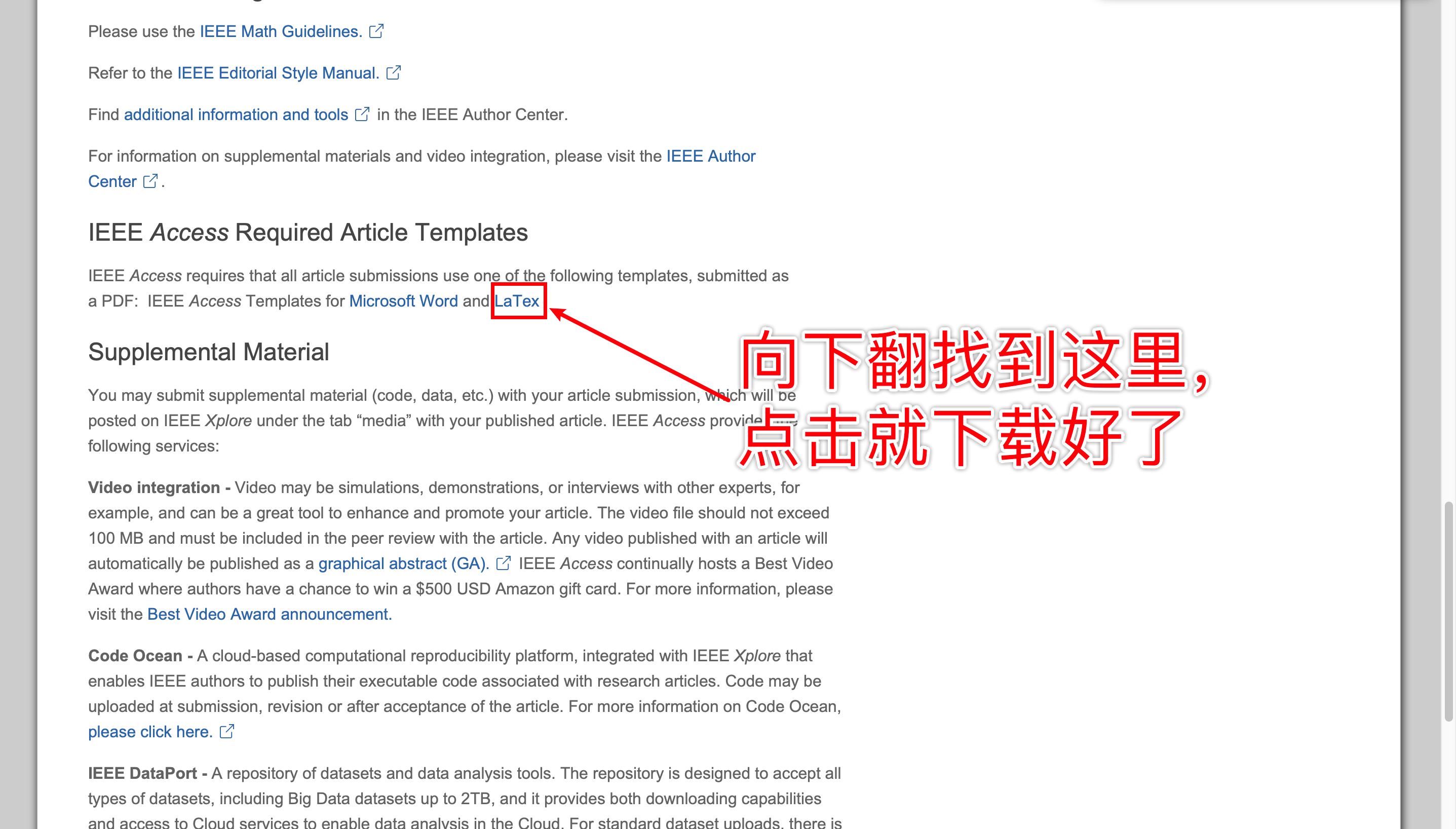 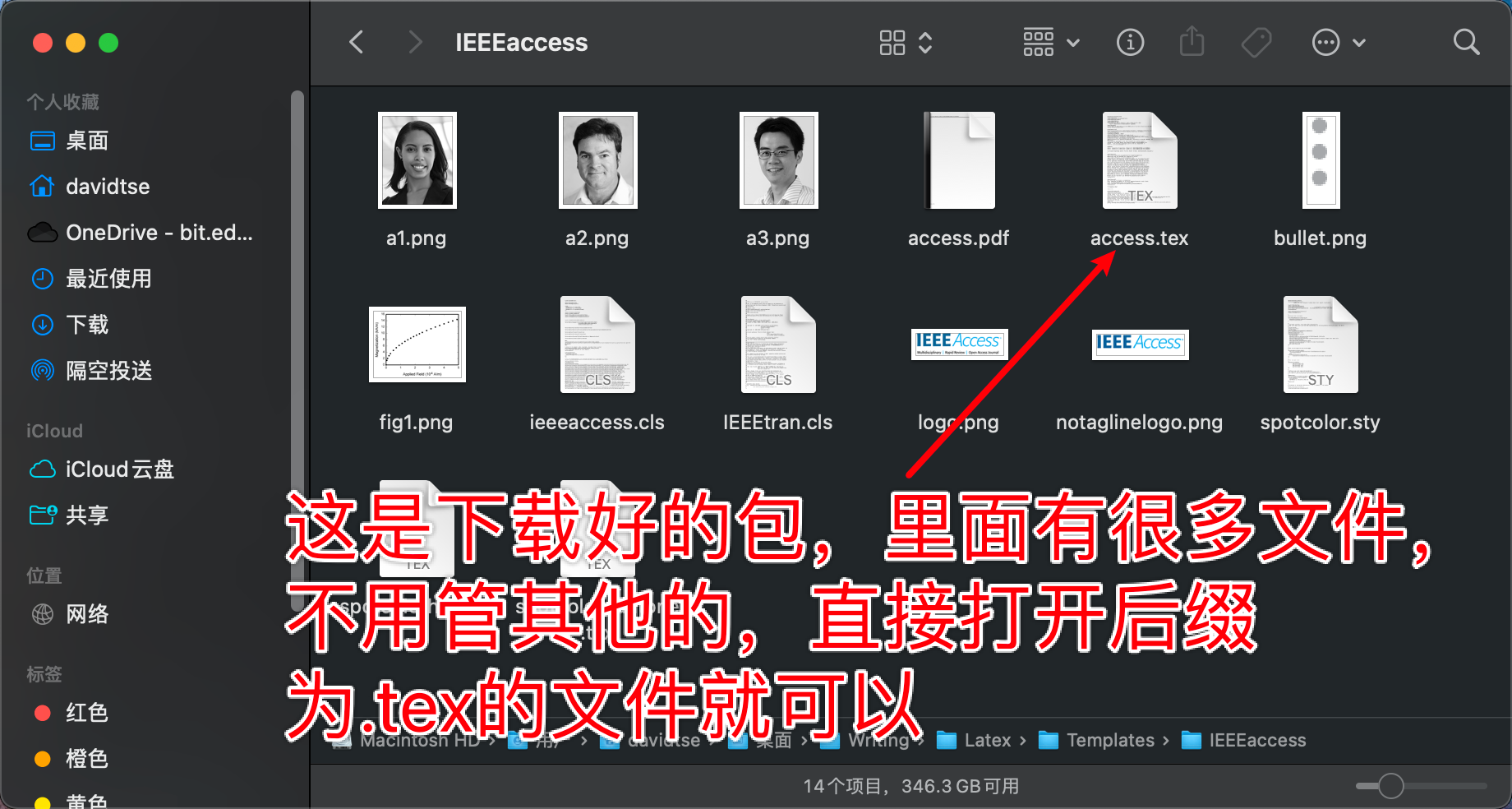 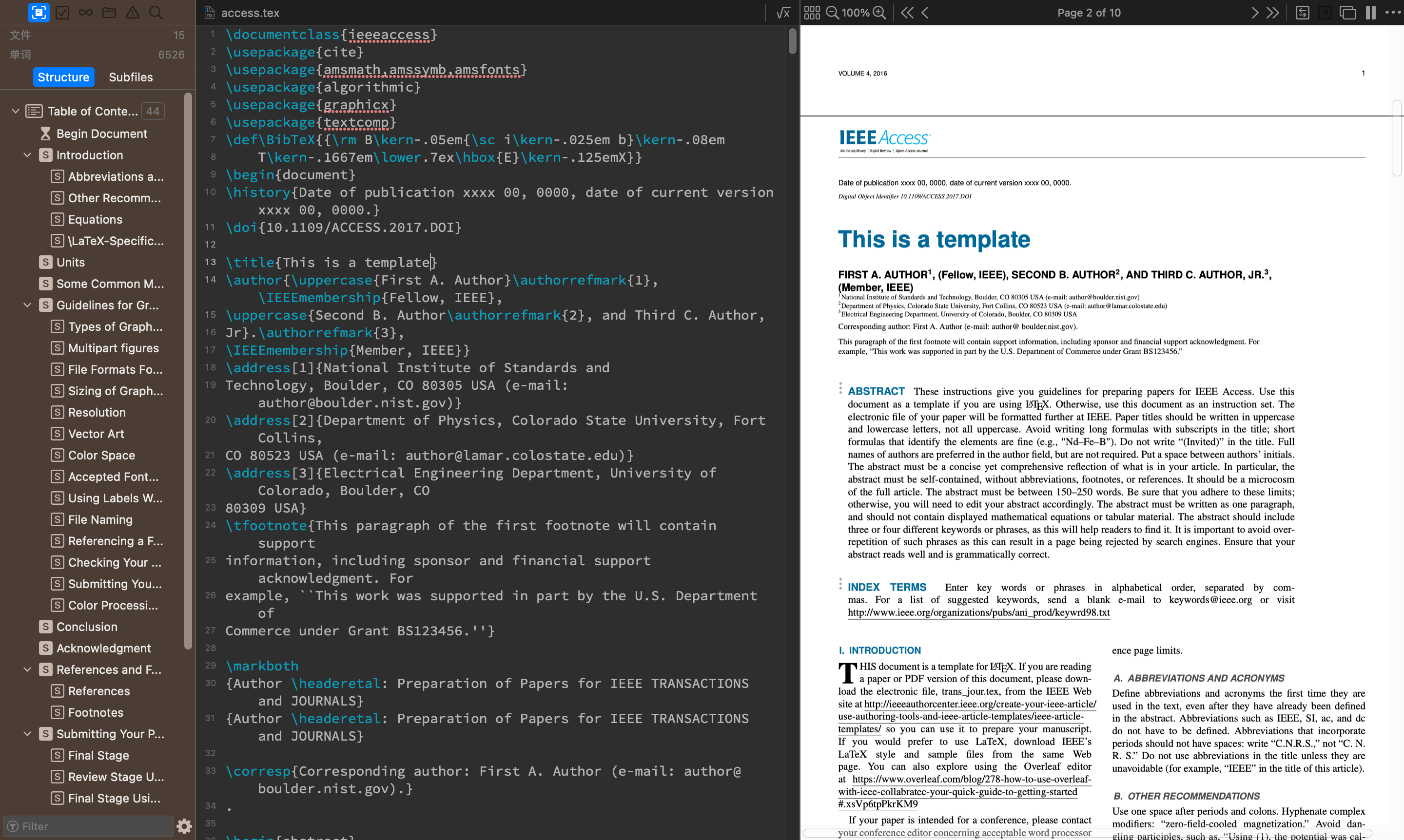 After opening the template, the software interface is as shown above, that is, the opening is successful, and the preparations for the earlier stage are finished here - the fish can be touched (bushi)

The \usepackage{} class in the template is the library you need to write this paper. It's similar to the #include<stdio.h>command in C. You don't need to do anything, just use it. Unlike their regular Latex use, periodical templates usually put the libraries that are common when writing papers in the header file. Of course, in the later writing process, you may encounter no errors when loading the library, so you need to find out which library is missing based on the reasons for the errors, and then add it yourself. The Library in the template I picked out alone, probably this sub ↓ \downarrow ↓

In the case of IEEE Access, the template is divided into several parts (here it is mainly analyzed by code, not in a single text, you can see the content of the comments below)

The method of listing references given above is too cumbersome. It is recommended that bibTex files be used for uniform management, citation and list output of references, and expanded in detail in the later section.

LaTex is designed to make the writing process much simpler by focusing more on the text itself than on typesetting. However, there is a big difference from the commonly used graphical writing software such as Microsoft Word. Many functions need to be achieved through basic sentences. Here we focus on several writing methods that individuals think are more commonly used, including formula input, picture insertion, table making, document management, and their own citation methods.

The corresponding relations of some basic operation symbols can be seen directly from the above examples, many of which I can't actually remember, so I can refer to this article. LaTeX Mathematical Formulas - Detailed Tutorial , basically covers all the formula input methods and rules you can use.

In the example above, I give the formula the name f13. When a reference is needed in the body, just enter \ref{f13} to make a reference to the formula. The article will automatically display the numbers in the order of the formulas. Typically, a reference is enclosed in parentheses (\ref{f13}).

Sometimes you need to type some symbols in the line, just use the dollar sign $and type the formula/symbol $in the body like this.

Here's an example of the picture insertion I practiced myself:

The above list is only the most basic insertion method which takes up a single column and has only one picture. In the process of writing an article, there will often be banner pictures and multiple subgraphs. Here is a code with three subgraphs arranged vertically:

The code here is copied and pasted directly into the exercise paper after I find it on the CSDN. For other special cases, you can refer to it LaTex Note 1: Insertion and layout of pictures

It is important to note that among the various picture formats, LaTex is the most compatible and the clearest output format is.eps, which is also mentioned in the article above about how various formats can be converted to.eps. 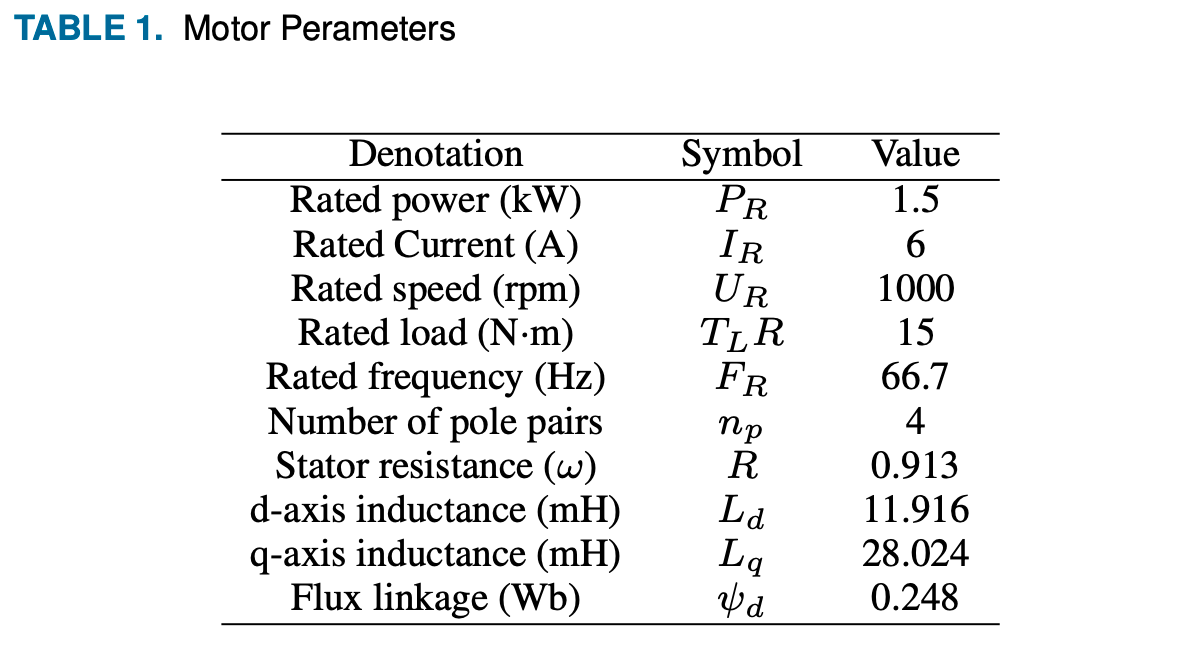 I am too lazy to compile the qwq code for Whooping with Markdown again:

3) In fact, none of the above needs to be understood, just at TablesGenerator It's awkward to have graphical input inside and then generate table code to copy and paste directly.

BibTex is a way of managing documents in LaTex. It is necessary to make separate.bib-format files for reference documents and to reference and compile them in LaTex files.

Use a text editor to create a new text document in the same directory as the main document of.tex (it is recommended that you store it in any folder on your computer, but later calls will be inconvenient). After naming and storing it, change the suffix name from.txt to.bib. The document can then be opened in the LaTex editor.

In the case of Google Scholar, after querying the literature you need to refer to, click the ite button below

Paste the text from the pop-up window into the new.bib file you created in the first step and arrange the documents. 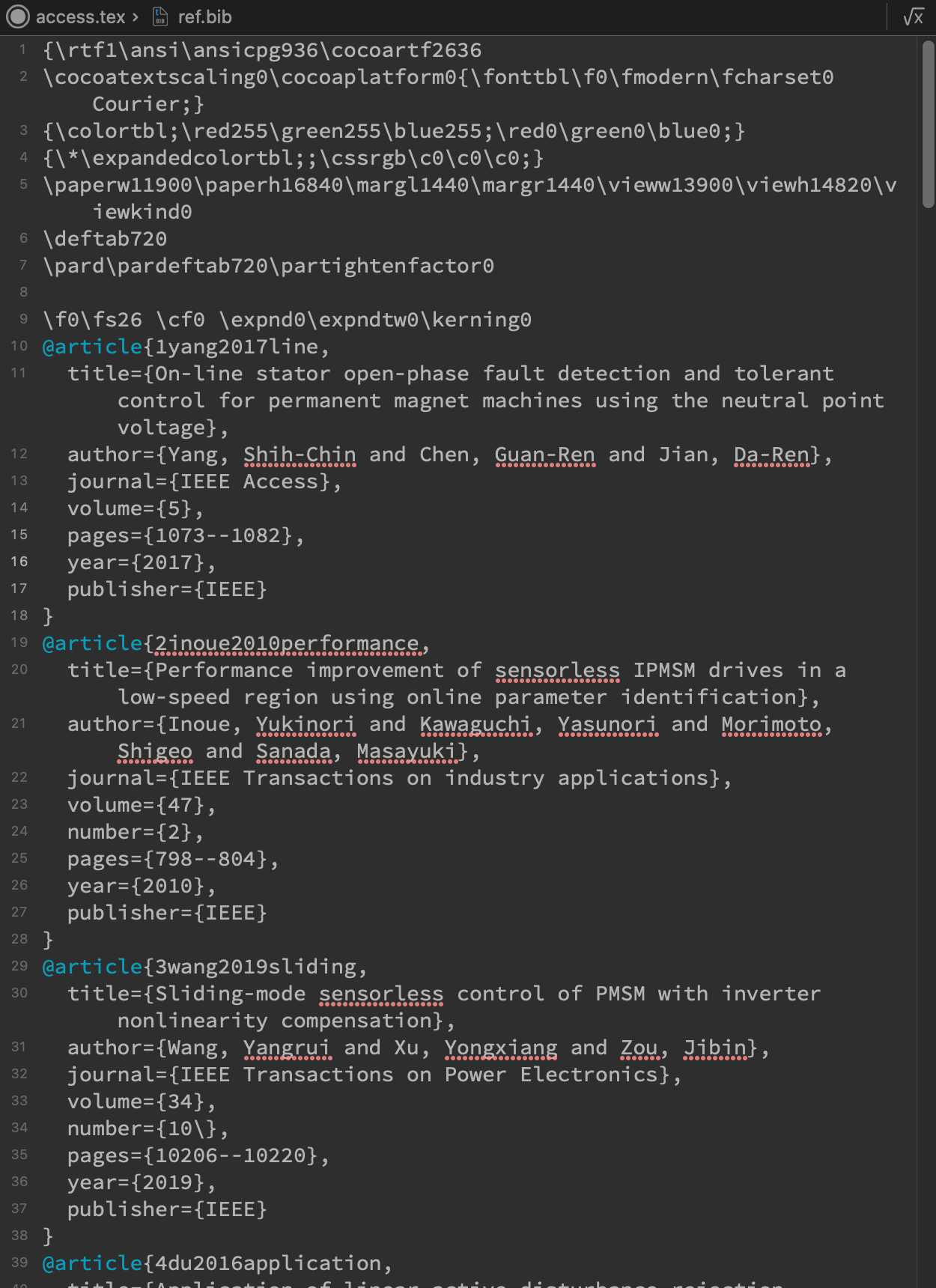 This is how my documentation looks when it's added. The code above doesn't matter. To modify the documentation, just adjust the @article entry below.

The BibTex source code for an article is introduced here as an example:

In the body, when a reference is required, simply use the \cite{name given to the article in parentheses} command, and the article will be automatically numbered.

It's really a straight line of code to solve the problem of document output!

***but***I actually encountered a bug here, that is, in the output BibTex text, all the documents with \ are displayed as empty, only the numbers can be output, and then the word will be replaced with empty uniformly to solve this problem, I don't know what is going on...