Command mode is a common mode in game development. If you only look at GoF's definition of this pattern, you will feel obscure and confused. My simple understanding of the command pattern is an object-oriented method call. We encapsulate a request method and save the required state of the request method when it is called in the corresponding class. Then we can instantiate the encapsulated request at any time according to our own needs. More simply, you can understand it as an object-oriented form of callback. The core of command mode is two points: 1. Request encapsulation   2. Requested operation

Encapsulating the "request" as an object allows you to parameterize different requests from the client, and perform the requested operations with queue, record, recovery and other methods. 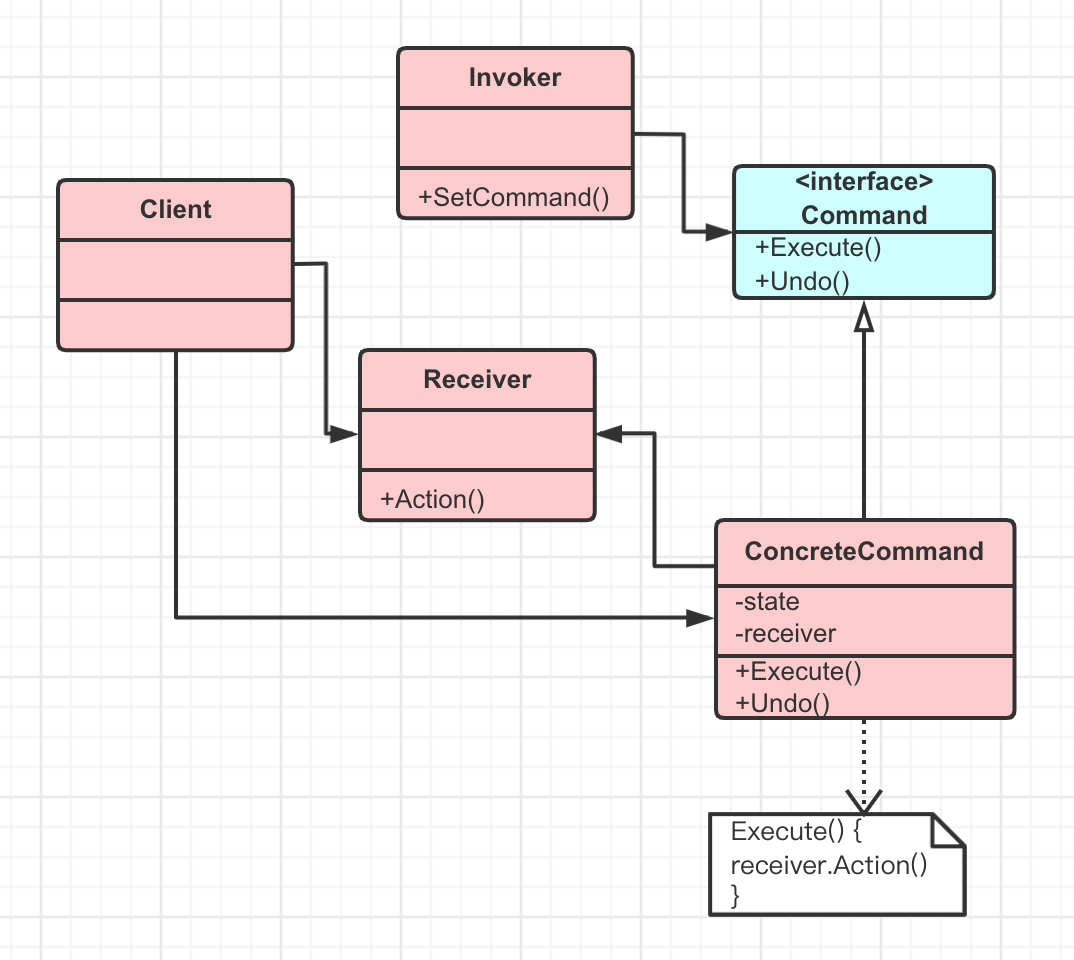 An interface is declared for all commands. By calling the Execute() method of the command object, the receiver can perform relevant actions. This interface also has an Undo() method to support revocable operations

It implements the encapsulation of commands, including the parameters of each command and the receiver (function executor). The caller only needs to call Execute() to make the request, and then the ConcreteCommand calls one or more actions of the receiver.

The class object that is encapsulated in the concretecommand (command implementation) class and really performs the function. Know how to do the necessary work to implement this request. Any class can act as a receiver.

It is responsible for creating a ConcreteCommand, and can set the command to the receiver (function executor) as appropriate.

The management container or management class of the command object and is responsible for requiring each command to perform its functions. The function of executing commands at a required point in time according to the situation.

We used to play the alloy warhead game. Players control the game characters to make various operations through buttons. such as

1. Press the A key to jump and avoid obstacles and enemies     2. Press the S key to fire bullets at the enemy     3. Press the D key to switch weapons

For these three operations, we can abstract three specific command implementations:

The player's actions include jumping, firing and switching weapons. The player here is the receiver (function executor), which is responsible for the specific behavior to be displayed when the command is called. We have implemented a gameactor (player character class):

Finally, we implement the classes that generate and execute commands (Client, Invoker)

Above, we use command mode to solve the problem of deep coupling between player operation and behavior. Does this implementation seem to have clearer code logic and easier to expand and maintain. The advantage of this is more than that. If we need to add AI in the game, we can encapsulate the commands that AI can execute, and then the AI code only needs to be responsible for generating commands and executing them at the right time. If AI and real players can implement exactly the same commands, they can reuse the same set of command classes.

The decoupling between the AI of selecting commands and the code of representing players provides us with great flexibility. We can use different AI modules for different characters. Or we can mix and match AI for different kinds of behavior. You want a more aggressive enemy? Just insert a more aggressive AI code to generate commands for it. In fact, we can even use AI on players' characters, which is very useful for game demonstration.

By encapsulating the commands that control the role as objects, we can eliminate the tight coupling of direct function calls. We can implement a queue, put the generated commands into the queue, and then take out the commands in the queue to execute in the frame loop. As shown in the figure below

We can also parameterize the player's operation commands and send them to another client through the network, so as to realize the synchronization and playback of player behavior. As shown in the figure below

At this point, I don't think the command mode is very useful. However, it's not over yet. In the above class diagram definition, we also have an undo operation, which also says that the command mode can support undo operations. If a command object can execute some behaviors, it should be easy to undo them. Undo and Redo are well-known applications of command mode. You can often see undo in some strategy games to ensure that players can roll back some dissatisfied steps. Some game level editors also need command mode to help us undo commands.

With command mode, it's a piece of cake for us to implement Undo. Suppose we make a single turn game, we want players to Undo some actions so that they can focus more on strategy rather than speculation. We can implement a move command class and save the last location state in the command class, so that we can restore to the last state when we execute Undo.

We can implement the method of generating commands in this way