Dynamic agents you have to learn

Dynamic agents you have to learn

As a senior single dog, Xiaoqiang has finally ushered in her own spring. Under his relentless pursuit, Xiao Li, a colleague, finally agreed to give him a chance to have a one month investigation period. If she performs well in this month, she will officially communicate with him, or else she will not be pestered.

Although Xiaoqiang's mother and child are single until now, they have not studied little about their preferences for girls. They also know that chasing girls is A gift. Girls like cosmetics, so they decide to send Xiaoli A lipstick first. Xiaoli may agree to be his girlfriend as soon as she is happy. But after A long night of tossing and turning, she didn't find A suitable one. Finally, she learned from her colleague Xiaohong that Xiaoli has always liked it Korea A company lipstick, but this brand of lipstick in China is very difficult to buy, this can be bad Xiaoqiang.

In order to love the beautiful girl, go through fire and water, so Xiaoqiang decided to go to South Korea in person to buy this lipstick. But seeing the price of the round-trip ticket, I can't help but feel reluctant to give up. I usually don't give up to change my shorts. This time, I really want to bleed a lot. But when she thought of receiving lipstick, she jumped into his arms happily and smiled like an aunt. Finally, Xiaoqiang decides to go to South Korea to buy lipstick

Xiaoqiang goes to the counter of factory A to buy:

What are the problems?

Xiaoqiang went to South Korea to buy lipstick. Because he didn't know Korean, he went around a lot in South Korea to find the exclusive store of this lipstick. He really suffered a lot. In addition, the number of air tickets returned from abroad is several thousand, which also takes up a beautiful weekend. And when he came back, Xiaoqiang gave lipstick to Xiaoli directly. Because there was no exquisite package, there was less surprise and sense of ceremony, and the most important thing was that the color number was not Xiaoli's favorite. Xiaoli did not show how happy she was. Naturally, there was no hug or flavor in her imagination. In a word, the present didn't achieve the desired effect, it took time, effort and money.

Who let him be the immortal Xiaoqiang? A setback can't defeat him. He decides to give a gift and choose a mouth red number suitable for Xiaoli, but he really doesn't understand the color number. Just as Xiaoqiang is brushing her circle of friends gloomily, she suddenly sees the circle of friends of Xiaomei, a primary school classmate. Xiaomei married a rich second generation last year. Now she often goes abroad to play, and helps her friends to buy some cosmetics. This time, Xiaomei happened to be in Korea. She sent a circle of friends to ask if there were any friends who needed to buy on behalf of her. She also had three sexy photo portraits. Xiaoqiang's saliva flowed. She thought that Xiaomei was Xiaoqiang's dream girl at the beginning. When she thought of her goddess Xiaoli's good figure, she fought again. She contacted Xiaomei and asked her to buy a lipstick from company A. Told Xiaomei about the last delivery of lipstick, and was laughed at by Xiaomei. Xiaomei decided to help him choose a color number, and asked him to send a picture of Xiaoli's plain face, and choose a lipstick suitable for her according to her skin color.

It can be seen from the results that Xiaomei didn't buy the pink lipstick of Barbie, but bought a more suitable red lipstick of her aunt. Besides, we also provide exquisite packing and free mail service, which can be returned for seven days. It's a one-stop service, from pre purchase consultation to after-sales service. After receiving the express delivery, Xiaoqiang took the lipstick with exquisite packaging, asked Xiaoli out for dinner, and gave it to her during the meal. This time, the goddess finally smiled happily. Seeing the goddess's smile, Xiaoqiang even thought about the name of the child.

As an agent, Xiaomei enhanced the business of company A, without modifying the code of company A, which is A non-invasive enhancement. The second point does not affect the client's call, that is, the parameters required by Xiaoqiang's purchase process remain unchanged.

Xiaoli has been enthusiastic about Xiaoqiang for a few days, and has begun to become aloof. She always replied to the conversation, and, uh, she wanted to eat out for a variety of reasons. When Xiao Qiang was in distress, she thought about whether to send some more gifts to her. Since the lipstick had already been delivered, she would send a box of foundation and a set of water milk. The goddess would love it.

So he contacted Xiaomei. This time, Xiaomei took a vacation in Japan and returned home in two days. He told Xiaomei the idea that he wanted to buy foundation and water milk, but Xiaomei did not buy these products at present. But in the plea of Xiao Qiang, he said what happiness in his next life depended on small beauty. In line with the principles of not only destroying ten temples and destroying a marriage, Xiao Mei promised to help him buy foundation and water milk.

B produces foundation and sells:

What should Xiaomei do at this time? Continue to add implemented interfaces? Like the following, what if you want to represent the milk? Is it unreasonable to implement the interface next, which violates the opening and closing principle (open for extension and close for modification)

At that time, Xiaomei was already busy, and needed to rush to Korea to help others to buy lipstick, and to go to Japan to help Xiao Qiang to buy foundation. So she planned to recruit several employees to run errands for her, some went to Korea to buy lipsticks, others went to Japan to buy foundation, don't forget that her husband was rich in the two generation, and some were money. It was done, so Xiaomei set up Xiaomei purchasing company. Now it can buy lipsticks, foundation, water milk and other cosmetics.

The Proxy class and InvocationHandler interface are used here, which needs to be briefly introduced as follows:

Proxy provides a static method to generate a dynamic proxy class and its instances. The static method is newProxyInstance. The source code is as follows:

In short, the InvocationHandler interface is equivalent to a company's specification. The invoke method specifies what the company does. For example, in this example, in addition to its own business (purchasing goods on behalf of others), there are pre enhancement (consulting before buying) and post enhancement (post-sale service). These are the specifications of a company, which are formulated by Xiaomei Yes, all employees must comply.

The InvocationHandler is only responsible for enhancing business, and the Proxy is only responsible for creating objects. In this example, the Proxy is used to specify employees in the company. The InvocationHandler specifies what services the employees provide to customers (pre purchase consultation, purchasing on behalf of others, package mailing, after-sales, etc.). It also embodies the principle of single responsibility.

The class diagram of the proxy object is as follows:

Let's first look at the complete life cycle of a class: 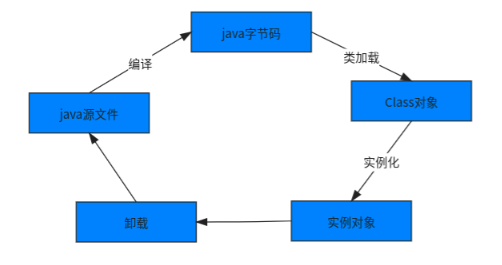 2. Hot load from the network, such as tomacat.

3. From memory, such as dynamic agent.

How does the JVM generate bytecode in memory? To analyze the source code, the first entry is the Proxy.newProxyInstance we call

Click in to view the newProxyInstance method, as follows: 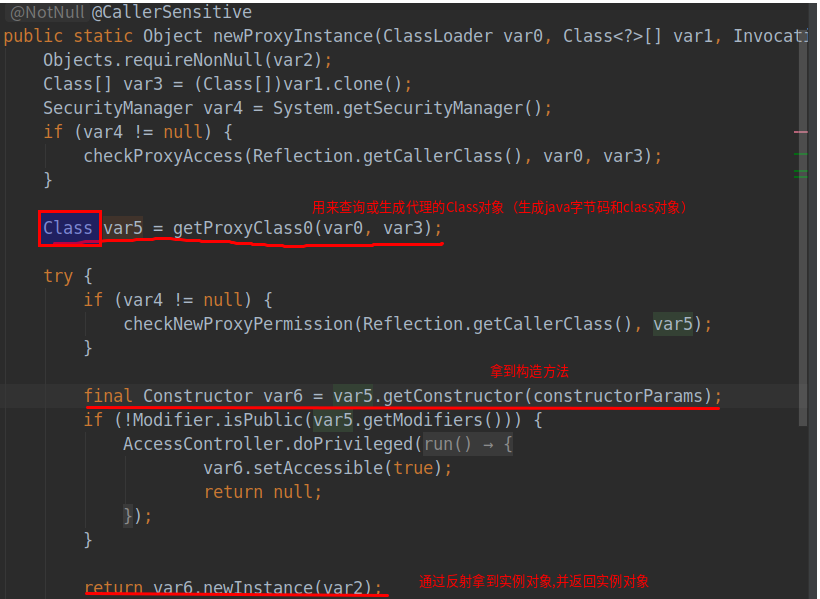 Focus on the underlined part. Continue to check the function of this line of code. Click get to enter the source code: 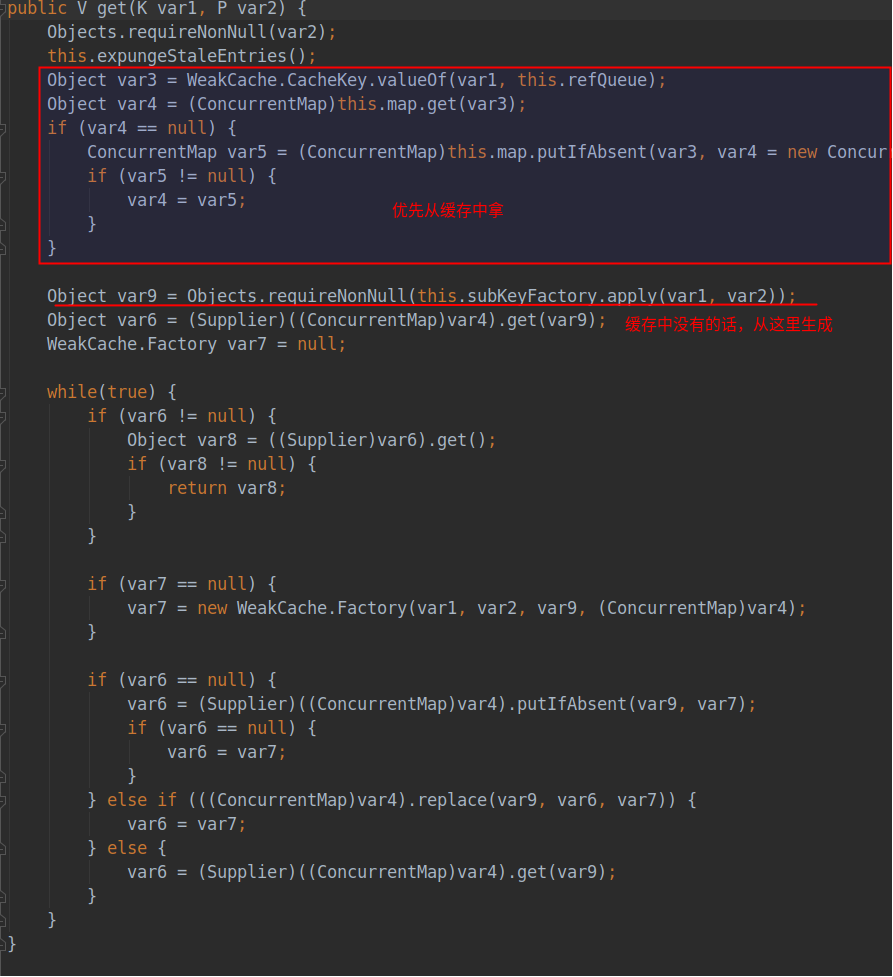 The first parameter received is the class loader, the second is an array of interfaces to be implemented, and then traverse these interfaces for some checks. The code in the check part is omitted, and then

Generate a sequence number, and generate the name of the Proxy Class in the form of package name + $Proxy + sequence number. Then generate java bytecode and Class object. The method of generating bytecode generateProxyClass 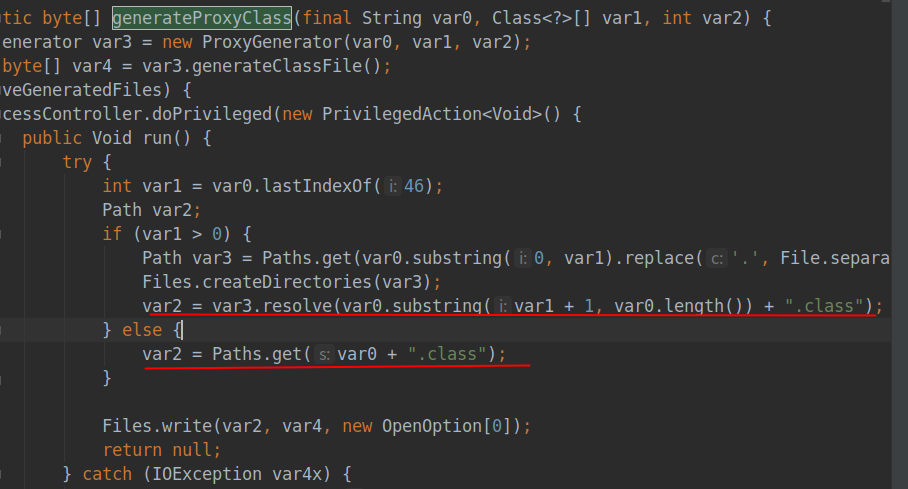 From the underlined part, we can see that the bytecode file with the suffix of. class has been generated.

Write a tool class, use the above method to generate the bytecode of the proxy object and save it, and view the java source code through Decompilation

Add the following two lines of code after the XiaoQiang class to call the above tool class:

All the final business code actually calls the Invoke() method in XiaoMeiCompany. In this method, we have enhanced the business (pre method and post method). This is the core principle that dynamic agents can enhance business.

2. Why can MyBatis directly use the mapper interface to access the database

3. How is it implemented that mybatis can print log information such as sql statements when opening debugging mode? What design patterns are used in the implementation