Docker virtualization management: 30 minutes to learn how to use Docker

There are too many official introductions about Docker on the Internet that I won't post. As a practical experience, Docker can greatly simplify the process of setting up environment and deploying services, greatly reduce the time cost of deployment, and free your hands.

This article will not go into the Docker underlying architecture and how it works, nor will there be a bunch of schema maps posted here.The purpose of this article is to let you learn to use Docker as quickly as possible. You can learn more about Docker's architecture and its underlying layers after you have learned the basic uses of Docker.It's a bit confusing to get to the bottom of an architecture chat, but you should know at least three of Docker's core components: warehouses, mirrors and containers, and their relationships before you use Docker.This article will take you through a MySQL sample to understand and use Docker, and it will be easy to understand if you have a basic understanding of Docker and then look back at its architecture.

Warehouse: Warehouses are places where mirrors are stored centrally. After installing Docker locally, we need to pull the mirrors from the warehouse.It can be compared to Maven, which has public warehouses and private warehouses.

Mirror: is a Linux file system that stores programs and their data that can be run on the Linux kernel.

Container: A running instance created by a mirror that can be interpreted as a compact version of the Linux system in which the programs in the mirror run.

However, one difference is that you can delete the weixin.exe file once it is installed. It has nothing to do with your WeChat program. Deleting the installation file will not affect the operation of your WeChat program.However, mirrors are different. If a container is using the mirror, it cannot be deleted (Error will tell you not to delete it when deleted).

You can view your system's kernel via uname-r:

Seeing the information above indicates that your Docker installation was successful, you can use the docker info command to view more detailed information.

For a more enjoyable use of Docker you may also need to configure mirroring acceleration, which can be analogous to Maven's private clothes, using a domestic mirror warehouse allows you to pull the mirror faster.

Execute vim/etc/docker/daemon.json and modify to the following configuration:

Reload the configuration and restart the Docker service:

Execute docker info and you can see that the mirror warehouse configuration is in effect.

Now that the Docker installation and configuration are complete, you are ready to download the mirror from the heron. Take MySQL 5.7 for example:

View the local image through the docker images command after the pull succeeds:

With mirroring, you need to use it to create a container to run, create and run MySQL containers:

Instructions for command parameters (more detailed later):
-d: running in the background
-p: port mapping, host port in front and container port in back, where I point host port 3306 to container port 3336
--name: Name the startup container
-e: Specify the environment variables in the container, where the Root user password for configuring MySQL is: 123456

After successful execution, the container ID is returned to view the created container: docker ps -a

You can see that the MySQL container you just created is already running, and now you can connect to the MySQL database through ${IP}:3306 (remember to let the port go or close the firewall).

With the steps above, you have already run your first container MySQL through Docker, and you can also connect to MySQL in the container through the host port.But it's not safe to do that, so let's start with a brief look at the relationship between containers and hosts.

The file system within the container and the host is independent (although the entire container is also stored as a file in a directory of the host), including the network between them, as well.The MySQL container you just ran has a parameter -p 3306:3306, which maps the port between the host and the container. You can also configure it to be -p 1234:3306, so that you can access port 3306 of the container by accessing port 1234 of the host.

Docker's run command provides a -v parameter that allows our container's internal directory to be mounted as the host's local directory so that when programs inside the container operate on this directory, they actually operate on the host's directory.Then we can mount the critical data that the program runs to the directory on the host machine, such as MySQL database files, the log files of the program runs, and so on.This way, when we delete containers, because these directories exist on the host machine, they will not be deleted along with the containers, thereby enabling the persistence of container data.

Or take the MySQL container just now for example, let's delete it first:

Then create and run the MySQL container with the following command, adding a -v parameter:

The three directories mounted here are the configuration, logs, and data for the database to run. They are also the most important data for MySQL programs. Even if this container is deleted, we can recover all the data by recreating the container as long as the data is still there.

After running the container with the above commands, you will see the database files generated by the MySQL run in your host's/usr/local/mysql/data directory: 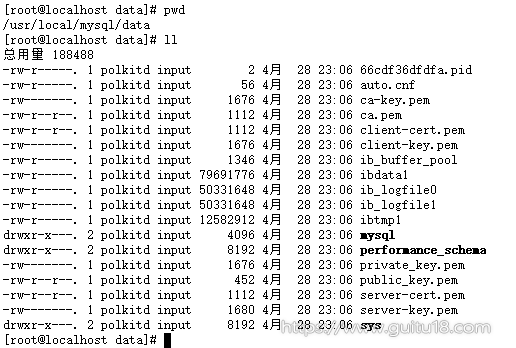 Docker's data volume mounting (which I'm accustomed to referring to as the mount directory) functionality is very important, and any program we run has data that needs to be persisted, which is very unsafe if placed directly inside a container.The mount directory can also operate the data directly inside the container and share the data between the containers. With Docker, it is important to develop the habit of mounting important data to the host.

This command above runs the container directly in the background. If debugging is required, you can modify the -d parameter to the -it parameter to run in the foreground. In some cases, you will likely encounter errors similar to the following (which can be seen by running in the foreground):

If this happens, then you need to turn off SELINUX as follows:

Run the container again to see the success prompt.

You can basically see how Docker works from the example above. Here are some basic commands, including command descriptions such as the most commonly used directory mounting functions:

Beginners don't have to focus on Dockerfile at first, and it will become clear when you become familiar with the overall architecture of Docker and how it works.

After learning the commands above, we can try to create my first homemade mirror. Here is my Dockerfile example:

Create a mirror from a Dockerfile:

The mirroring is done with the Dockerfile file.