Using lighting in 3D scene is very simple. We don't need to assign color values to each vertex of the model object. As long as we use some kind of lighting and set the material of the model object, Direct3D will calculate the color value of each vertex according to the lighting model algorithm to make the model produce color. As we have roughly introduced before, 3D models are completed in the modeling software, and materials are also given to the model. Therefore, in the actual game development, we only need to load the model file, read the material, and set the material for the model when rendering the model. Then, under the illumination of the light source, the model will display its own color. Generally, we don't use vertices to build a model manually. We use vertices to build a quadrilateral. This situation is mostly used for GUI user interface and 2D game development. At the same time, we don't assign colors to vertices. Basically, we paste a picture on this quadrilateral, that is, texture mapping. Modeling and texture mapping belong to art workers. Program developers mainly load the model and map files into the game after they get them.

There are two concepts about lighting. We must distinguish them. One is the type of illumination and the other is the type of light source. The types of lighting have been roughly mentioned before. They can be divided into ambient light, diffuse light and specular light (highlight). The types of light sources are divided into Point Light, Directional Light and Spot Light. In fact, there is no conflict between the two. The former is classified according to the lighting structure, and the latter is classified according to the lighting area. Whether Point Light, Directional Light, or spotlight, they are composed of ambient light, diffuse light and highlight.

First, introduce the lighting type. Ambient light means that a model object can be seen as long as light (reflected by other objects) reaches the object, even if there is no direct light source. This overall brightness based on the whole natural environment is called ambient light. Ambient light has no characteristics of position or direction, only one color brightness value, and will not decay. In other words, ambient light is a concept of global light. If you want to simulate lighting at a low cost and cost, it is a good choice to turn on the ambient light directly. The setting code of ambient light in Direct3D is as follows:

Diffuse light is the most common, and the illumination of sunlight and light can be regarded as diffuse light. This type of light propagates in a specific direction, reaches the object surface and reflects evenly in all directions. Therefore, the color and brightness are the same no matter which direction you look at the object from. Generally, the color of the model is basically determined by the diffuse light.

Specular reflected light (high light), this type of light propagates in a specific direction. When it reaches the object surface, it will be reflected in one direction, resulting in high brightness illumination that can only be observed in an angle range. It should be noted that compared with other types of light, specular light requires a lot of calculation. Direct3D turns off specular reflection by default. If you want to turn on specular emission, you can use the following code:

The above is the lighting type, and the following is the light source type. Direct3D mainly has three types of light sources, Point Light, Directional Light and Spot Light.

Point lights have color and position attributes and emit light in all directions. The light emitted evenly from one point to the surrounding has the largest illumination range, and the brightness decreases with distance. The most obvious example is the bulb used in our home. Because a point light attenuates, it is a local light source that illuminates only part of the area.

In DirectX, the D3DLIGHT9 structure is used to represent a light source object. The structure contains the type of light source and the color value of light. For local light sources, it is also necessary to set an attenuation range value. The settings of these parameters are user-friendly. We will introduce them in detail in the code case. Next, let's talk about a material. In DirectX, D3DMATERIAL9 structure is used to represent a material object, and its parameters are basically the setting of reflectivity. Next, we use VS2019 to create a new project "D3D_05_Light", and then copy the previous code. In order to better plan our code, we store the light source settings independently in the new method initLight. Because the setting of light is basically one-time, we put the initLight function in the initScene function.

The following is the declaration of global variables:

Next is our initScene function. The code is as follows:

In the initProjection function, we fix three types of transformations. The code is as follows:

Next is our initLight function. We introduce the creation of different light sources one by one. The code is as follows: 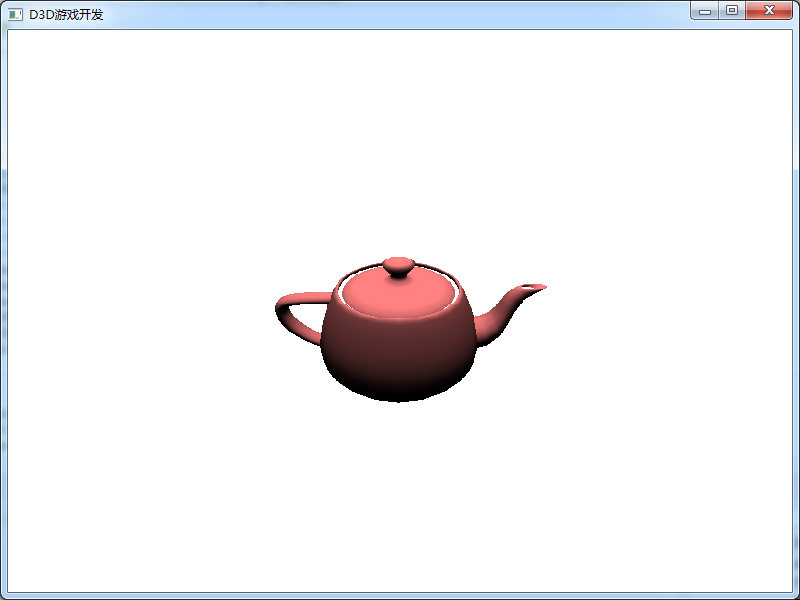 We can see that the point light source is directly above the teapot (the world origin), and then illuminates the scene within 1000 units around. We set the teapot to reflect the red color, so the teapot displays red. There is no light at the bottom of the teapot, so it is black. Next, we define a directional light to illuminate the whole scene from right to left in the X-axis direction. 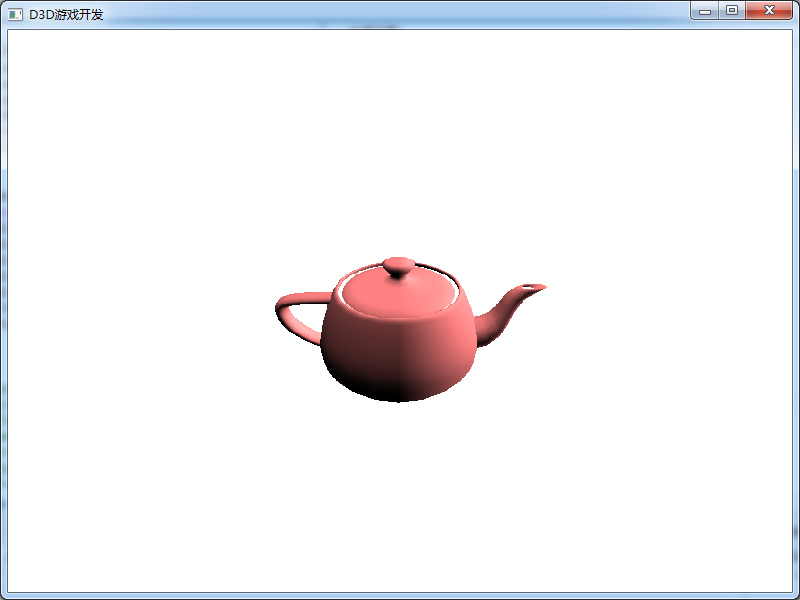 We can see that the right side of the teapot lights up because it receives a parallel light from the right. Next, we continue to create a spotlight. We let the spotlight shine from left to right. The code is as follows:

The above is the definition of a spotlight, which has many parameters. Because the spotlight is an inner and outer cone, its position, direction, propagation distance and radian of the inner and outer cone need to be set. You also need to set its attenuation. In addition to the distance factor, the attenuation of the spotlight also needs to set the attenuation of the inner cone to the outer cone. After the definition is completed, you also need to use SetLight and LightEnable methods to enable the directional light. Let's look at the effect after adding a spotlight: 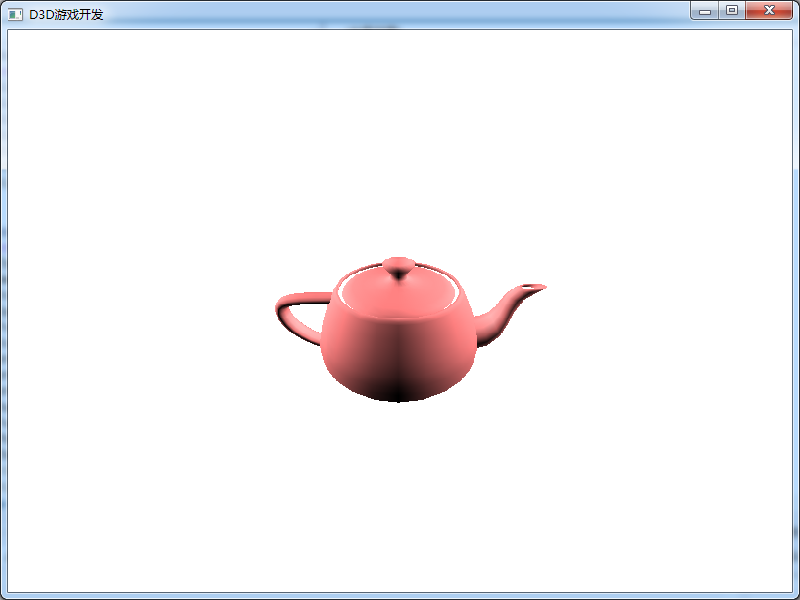 We can see that the teapot is illuminated from the top, left and right. Although we have defined the ambient color value (all zero) in the three types of light sources, the real ambient effect is set as follows:

So, doesn't setting ambient light in the above three light sources work? The answer, it works. However, you can't set two types of ambient lights at the same time, which will cause problems. Generally, we do not set the ambient light in the light source, but directly use the above code to uniformly set the ambient light color value. The simplest and best way to use light sources to illuminate the scene is to set the ambient light, which is actually a directional light, a point light, and finally a spotlight. As we mentioned before, the lighting model consumes a lot of hardware performance. However, different lighting combinations will simulate the real light and shadow effect and increase the user's experience. Therefore, the use of lighting in the scene is still determined according to the design requirements of the game. In this case, we have not set the highlight effect, because the highlight effect also needs the support of hardware performance.

Finally, in order to ensure the use of lighting, we also need to turn on lighting. The code is as follows:

After the introduction of lighting, let's set a default material. In fact, in game development, different models will have different materials. This case only demonstrates the lighting effect, so just make a default material. As mentioned above, we can make a material that reflects red light and give it to the model in the scene. The code is as follows:

We can use D3DXCOLOR(R, G, B, A) to represent the material reflection color value (D3DCLORVALUE), where R, G, B and a represent the component values of red, green, blue and transparency between 0.0f and 1.0f respectively. 0 represents the color light that does not reflect the component, and 1 represents all the color light that reflects the component. After defining the structure of D3DMATERIAL9, we need to call the SetMaterial method to set the currently used material. In addition, if the material is not specified by code in the program, Direct3D has a default material. The default material reflects all diffuse light, but does not reflect ambient light and specular emission light, and has no self luminous color. So far, our initLight function has been completed. Here, we do not set user interaction events, so the update function is empty. The rest is the renderScene function, which contains the following code:

Finally, we can run the code and see the real effect of the teapot, because we have added the global ambient light, so all parts of the teapot will become bright. The effect is shown in the following figure: 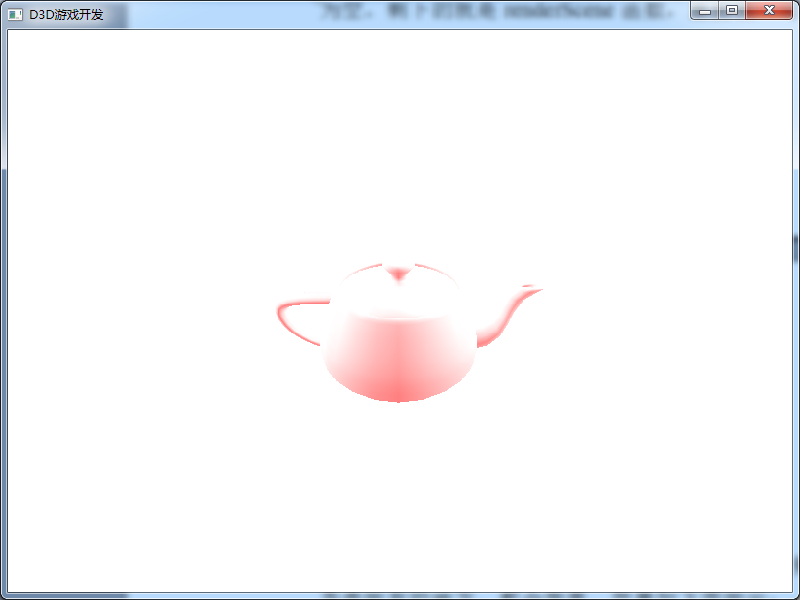 Because of the addition of global illumination, the overall red of the teapot is brighter. If we only turn on the global ambient light, the effect of removing other light sources is as follows:

The global ambient light shines on the teapot from all directions at the same time, so that the color of its surface is the same, and there is no light and shadow effect.

Download address of all code cases of this course:

Note: This is the second course in our game development series. This course mainly uses C + + language and DirectX to explain some basic theoretical knowledge in game development. The learning goal is mainly based on understanding theoretical knowledge. The attached C + + code can be understood and run successfully. We are not required to use DirectX to develop games. If there are some mistakes in the course, please leave a message and correct them. Thank you very much!