04 understanding process: why was my process in the container forcibly killed?

Let me tell you why it is important to do this in process management. In the actual production environment, many applications need to clean up when exiting, such as clearing some remote links or clearing some local temporary data.

Such cleaning can avoid remote or local errors as much as possible, such as reducing packet loss. These exit cleaning work is usually carried out in the handler registered by the signal user SIGTERM.

However, if our process receives SIGKILL, the application will not have a chance to perform these cleanups. This means that once the process cannot be gracefully shutdown, it will increase the error rate of the application.

So next, let's recreate what happens when the process exits the container.

Continuing the idea of dealing with the problem in the previous course, we can also run a simple container to reproduce the problem, execute make image with the code here, and then start the container image with Docker.

You will find that when we stop the container with docker stop, if we use the strace tool to monitor, we can see the signals received by the init process and another process in the container.

Here, we can understand these two system calls in combination with the signals mentioned earlier. In the first lecture on container init process, we introduced the basic concept of signal. Signal is a notification received by Linux process.

After you learn how to use these two system calls, you will know more about Linux signals. When you encounter signal related problems in the container, you will be able to better understand your ideas.

I will give you another example of using functions to help you further understand how processes implement graceful shutdown.

The signal processing of the process actually includes two problems:

The system call for sending signals in Linux is kill(). In many previous examples, we used the command kill. Its internal implementation calls the kill() function.

The following is the definition of the kill() function in the Linux Programmer's Manual.

This function has two parameters:

After we know the system call to send the signal, let's look at another system call, that is, the signal() system calls this function, which can register the signal
handler.

The following is the definition of signal() in Linux Programmer's Manual. The parameter signum is the signal number, for example, the value 15 is the signal SIGTERM; Parameter handler is a function pointer parameter used to register the user's signal handler.

In the first lecture on the container init process, we learned the process's processing of each signal, including three options: calling the system default behavior, capturing and ignoring. The choice here is actually how to call the system call signal() in the program.

The first option is default. If we do not make any system calls related to signal() for a signal, such as SIGTERM signal, then when the process is running, if the signal SIGTERM is received, the process will execute the default code of SIGTERM signal in the kernel.

For SIGTERM, its default behavior is process terminate.

There are different default behaviors for different signals in the kernel. Generally, one of the three behaviors will be used: terminate, stop and ignore.

Capture means that we register our handler for a signal, * * call signal() in the code. In this way, when the process is running, once it receives the signal, it will not execute the default code in the kernel, but will execute the handler registered through signal ().

For example, in the following code, we register a handler for the SIGTERM signal, and only do a print operation in the handler.

When the program is running, if it receives SIGTERM signal, it will not exit, but only display "received SIGTERM" on the screen.

If we want the process to "ignore" a signal, we need to register a special handler, namely SIG, for the signal through the system call signal()_ IGN .

The effect of this operation is that when the program is running, if it receives the SIGTERM signal, the program will neither exit nor output log on the screen, but there is no response, just like it has not received this signal at all.

Well, by explaining the system call signal(), we help you review the three choices of signal processing: default behavior, capture and ignore.

Here, I also want to remind you that SIGKILL and SIGSTOP signals are two privileged signals that cannot be captured and ignored. This feature is also reflected in the call to signal().

We can run the following code. If we register the handler for SIGKILL with signal(), it will return SIG_ERR, we are not allowed to capture.

Finally, I use the following code to make a summary.

For SIGKILL signal, if you call the signal() function to register a custom handler for it, the system will reject it.

When the Linux process receives the SIGTERM signal and causes the process to exit, the entry point of the Linux kernel for processing the process exit is do_exit() function, do_ The exit () function will release the related resources of the process, such as memory, file handle, semaphore, etc.

The entry point of Linux kernel for processing process exit is do_exit() function, do_ The exit () function will release the related resources of the process, such as memory, file handle, semaphore, etc.

After doing this, it calls an exit_ The notify () function is used to notify the parent-child processes related to this process.

The whole process is shown in the figure below. 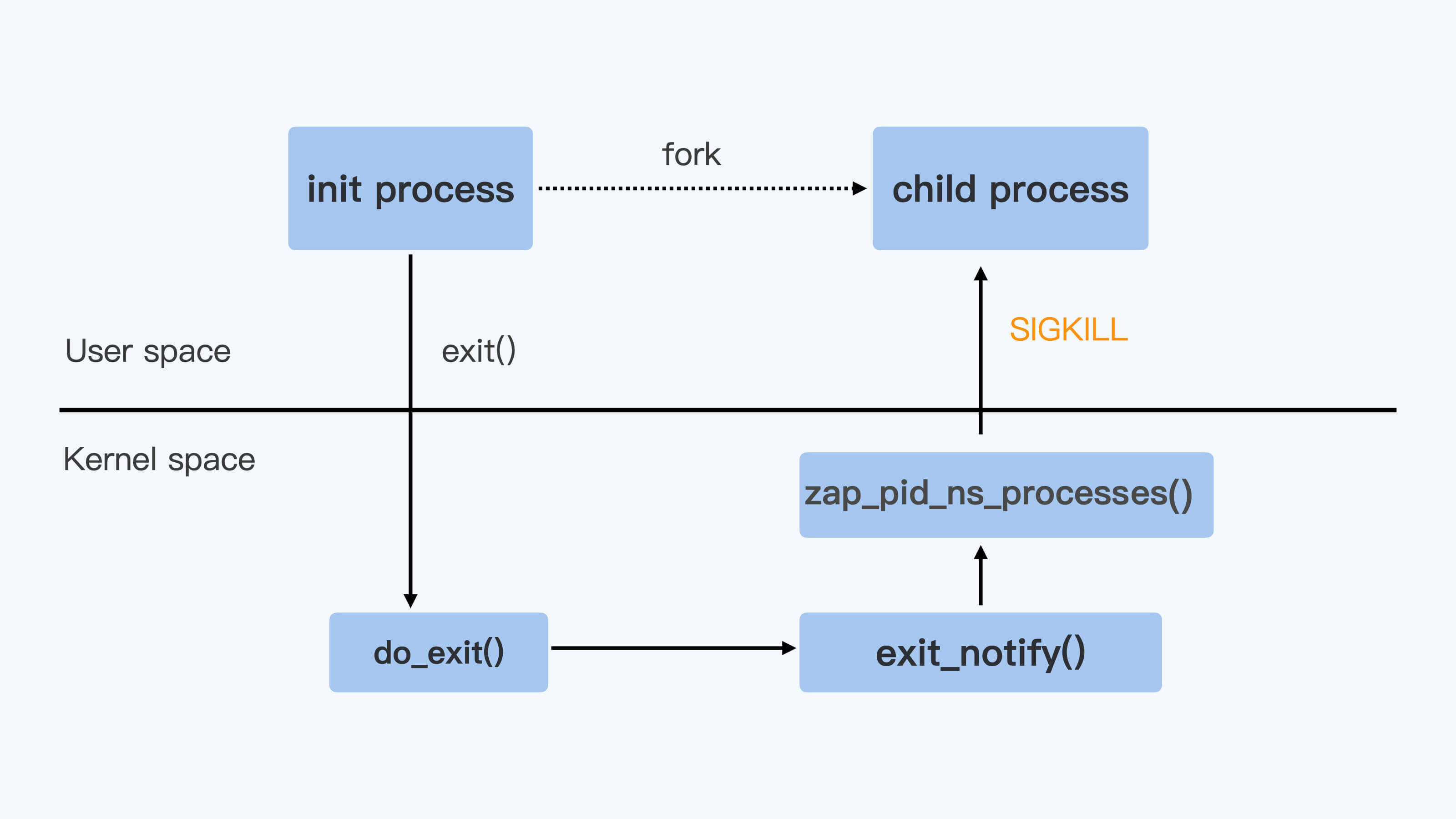 You can also see that the kernel code is like this.

At this point, we can understand why the container init process receives the SIGTERM signal, while other processes in the container receive the SIGKILL signal.

As I mentioned earlier, SIGKILL is a privilege signal (the privilege signal is reserved by Linux for the kernel and super users to delete any process, which can not be ignored or captured).

Therefore, after receiving this signal, the process immediately exits. It has no chance to call some handler s that release resources before exiting.

SIGTERM can be captured, and users can register their own handler s. Therefore, when the program in the container stops the container, we prefer the process to receive the SIGTERM signal rather than the SIGKILL signal.

As you may have thought, let the container init process forward the SIGTERM signal. This is true. For example, the tini used in Docker Container is used as init process. In tini code, sigtimedwait() function is called to check the signal received by itself, then kill() is called to send the signal to the sub process.

Let me give you a specific example. From the following code, we can see that tini will forward all other signals to its child processes except SIGCHLD.