In the program, we will use various pool optimization caches to create expensive objects, such as thread pool, connection pool and memory pool. Generally, some objects are created in advance and put into the pool. When they are used, they are directly taken out for use and returned for reuse. The number of cached objects in the pool will be adjusted through certain strategies to achieve dynamic scaling.

Because the creation of threads is expensive, creating a large number of threads arbitrarily and without control will cause performance problems. Therefore, short and fast tasks generally give priority to using thread pool instead of directly creating threads

1. The declaration of thread pool needs to be done manually

The Executors class in Java defines some quick tools and methods to help us quickly create a thread pool. Alibaba java development manual mentions that it is forbidden to use these methods to create thread pools, but new ThreadPoolExecutor should be used manually to create thread pools. Behind this rule are a large number of bloody production accidents. The most typical are newFixedThreadPool and newCachedThreadPool, which may lead to OOM problems due to resource depletion. 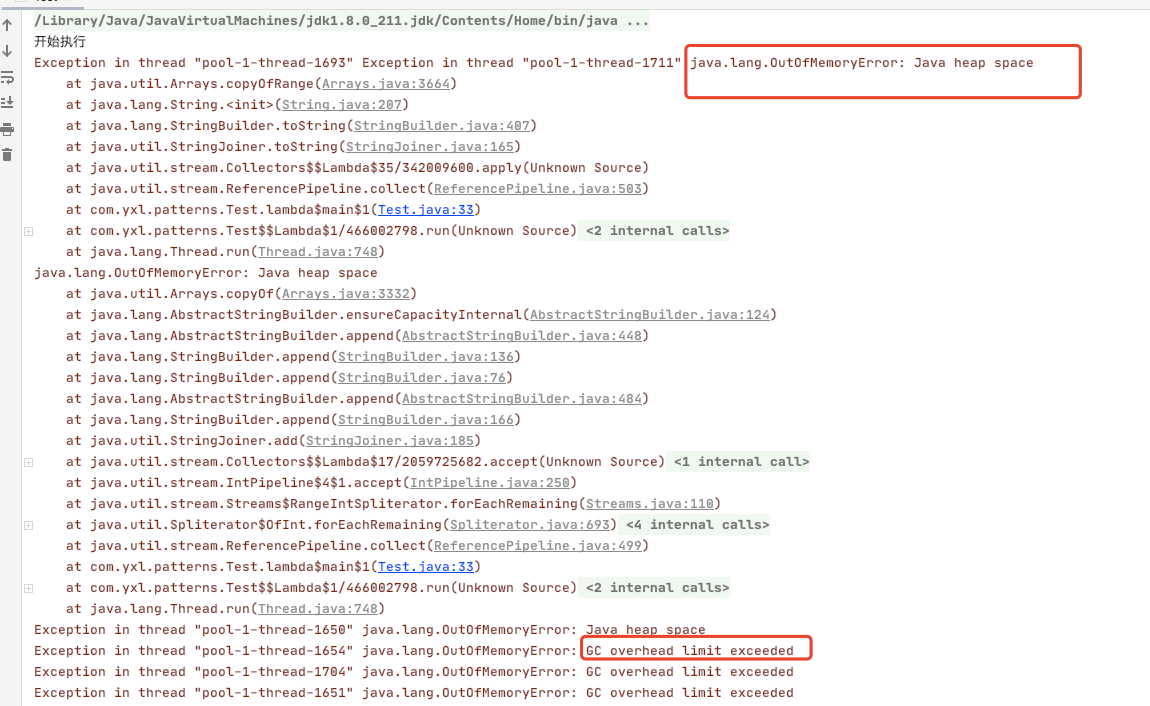 First, we look at the source code of the new fixedthreadpool method and find that the work queue of the thread pool directly creates a LinkedBlockingQueue,

Click to see that the LinkedBlockingQueue construction method is an integer. Max_ The queue of value length can be considered unbounded

Although newFixedThreadPool can control a fixed number of worker threads, the task queue is unbounded. If there are many tasks and the execution is slow, but the queue may be quickly overstocked and burst the memory, resulting in OOM

If we change newFixedThreadPool to newCachedThreadPool method to get thread pool. Soon after the program runs, you will also see OOM exceptions

The maximum number of threads in this thread pool is Integer.MAX_VALUE, which is considered as having no upper limit, can be considered as having no upper limit, and its work queue SynchronousQueue is a blocking queue without storage space. This means that as long as a request arrives, a worker thread must be found to process it. If there is no idle thread, a new one will be created. Since our tasks take one hour to complete, a large number of threads will be created after a large number of tasks come in. We know that threads allocate a certain memory space as a thread stack, such as 1MB. Therefore, unlimited thread creation will inevitably lead to OOM

We do not recommend using the two fast thread pools provided by Executors for the following reasons:

2. Confirm whether the route pool is being reused

Therefore, when using the thread pool, we should specify the core parameters of the thread pool according to the "priority" of the task, including the number of threads, recycling strategy and task queue:
: 1. For IO tasks with slow execution and small number, it may be necessary to consider more threads instead of too large queue
Columns.
2. For computing tasks with large throughput, the number of threads should not be too many, which can be CPU cores or cores * 2 (reason:
Therefore, the thread must be scheduled to a CPU for execution. If the task itself is a CPU bound task, it is too long
Multiple threads will only increase the overhead of thread switching and not improve throughput), but it may require a long queue to do so
Buffer.