Delve into the principles of computer composition ELF and static links: why can't programs run under Linux and Windows at the same time?

In the past three sections, you and I have seen how our programs become machine instructions through some simple code; How conditional jumps like if... else are executed; How do loops like for/while execute; How mutual calls between functions occur.

Since our programs are eventually turned into machine codes to execute, why is the same program on the same computer Linux Can it run under windows, but not under windows? Conversely, programs on Windows cannot be executed on Linux. But our CPU has not been replaced. Should it recognize the same instructions?

If you have the same question as me, let's solve this section together.

In Section 5, we said that the written C language code can be compiled into assembly code through the compiler, and then the assembly code can be transformed into machine code understandable by the CPU through the assembler, so the CPU can execute these machine codes. You should be familiar with this process now, but this description greatly simplifies the process. Next, let's look at how a C language program becomes an executable program.

I don't know if you have noticed that in the past few sections, we have some small problems with the files generated by gcc and the assembly instructions obtained by objdump. We split the previous example of the add function into two files, add_lib.c and link_example.c.

We compile these two files through gcc, and then look at their assembly code through the objdump command.

Now that the code has been "compiled" into instructions, we might as well try running it. / link_example.o.

Unfortunately, the file does not have execution permission, and we encountered a Permission denied error. Even if link is given through the chmod command_ Example. O file executable permissions, run. / link_example.o will still only get an error of cannot execute binary file:Exec format error.

If we take a closer look at the codes of the two files from objdump, we will find that the addresses of the two programs start from 0. If the address is the same, how does the program know which file to jump to if it needs to call the function through the call instruction?

Let's put it this way. Either the run error here or the duplicate address in the assembly code from objdump is due to add_lib.o and link_example.o is not an Executable Program, but an Object File. Only by linking multiple object files and various function libraries called through Linker can we get an executable file.

In fact, the process of "C language code assembly code machine code" is composed of two parts when it is carried out on our computer.

The first part consists of three stages: compile, Assemble and Link. After these three stages are completed, we generate an executable file.

In the second part, we Load the executable file into memory through the Loader. The CPU reads instructions and data from memory to start the real program execution. 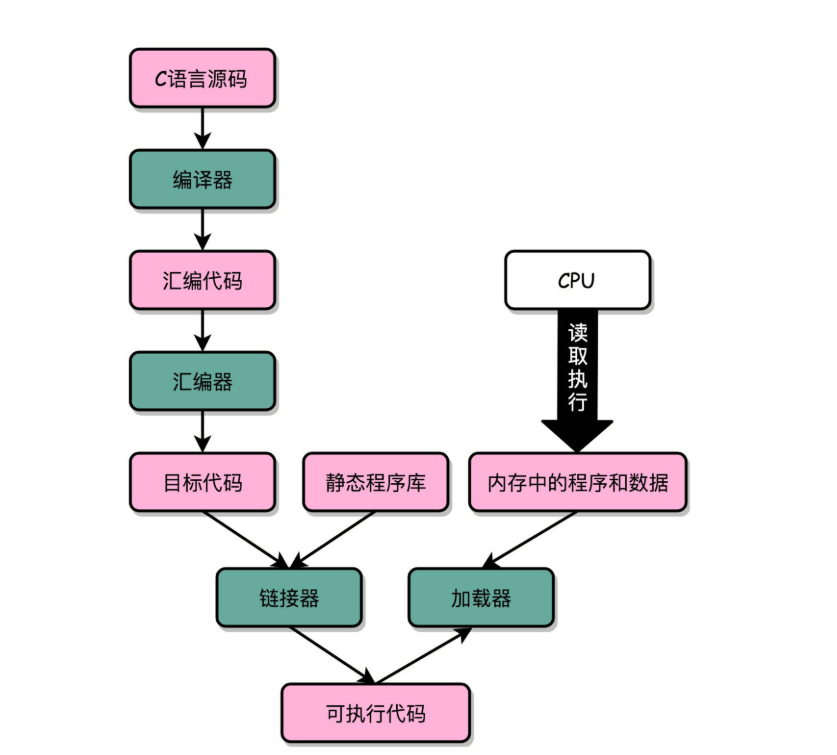 For example, in all our objdump codes in the past, you can see the corresponding function names, such as add, main, etc., and even the globally accessible variable names defined by you are stored in this elf format file. These names and their corresponding addresses are stored in an ELF file in a location called Symbols Table. The symbol table is equivalent to an address book, associating names with addresses.

ELF file format saves various information into sections one by one. Elf has a basic File Header to represent the basic attributes of the file, such as whether it is an executable file, the corresponding CPU, operating system, etc. In addition to these basic properties, most programs also have some sections:

1. The first is. text Section, also known as Code Section or Code Section, which is used to save the program code and instructions;

2. Followed by. Data Section, also known as Data Section, which is used to save the initialization data information set in the program;

3. Then there is the. rel.text Section, also known as the Relocation Table. In the redirection table, what is reserved is the current file. In fact, we don't know which jump addresses. Like the link above_ In example. O, we call add and printf in the main function, but before the link occurs, we don't know where to jump to, and these information will be stored in the redirection table;

4. Finally, the. symtab Section is called the Symbol Table. The Symbol Table keeps the address book of the function name and corresponding address defined in the current file. 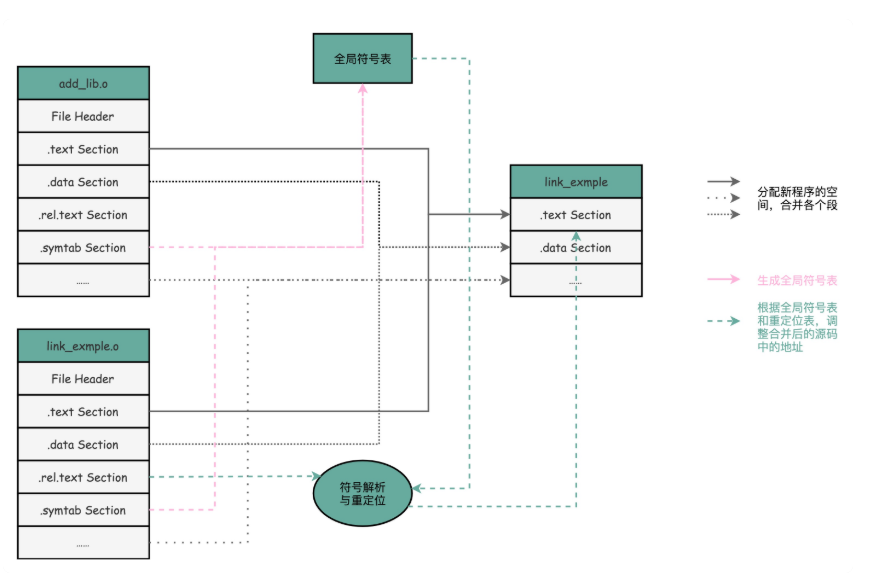 After the linker turns the program into an executable file, it is much easier for the loader to execute the program. The loader no longer considers the problem of address jump. It only needs to parse the ELF file and load the corresponding instructions and data into memory for CPU execution.

At this point, I believe you have guessed why the same program can be executed under LInux but cannot be executed under Windows. One very important reason is that the format of executable files under the two operating systems is different.

Today we will focus on the ELF file format under Linux, while the executable file format of Windows is a file format called PE (Portable Executable Format). Loaders under Linux can only parse elf format, not PE format.

If we have a loader that can parse the PE format, we may run the windows program under Linux. Does such a program really exist? Yes, the famous open source project Wine under Linux enables us to run windows programs directly under Linux through a loader compatible with PE format. Now Microsoft Windows also provides WSL, that is, WIndows Subsystem for Linux, which can parse and load ELF format files.

When we write a program that can be used, we not only compile and execute all the code in one file, but can split it into different function libraries. Finally, through a static link mechanism, we can not only divide the work between different files, but also "cooperate" through static links to become an executable program.

For ELF format files, in order to implement such a static linking mechanism, it not only lists the instructions that the program needs to execute, but also includes the redirection table and symbol table required for linking.