This scheme is developed on Embedded Linux. The audio scheme is based on ALSA. The voice communication is related to user space. It is a top-level solution. Due to the wired communication, the network environment is not particularly bad compared with the wireless communication, and there are not many packet loss compensation measures, mainly PLC, RFC2198, etc.

This scheme is developed on Android mobile phone, which is a traditional voice communication scheme on mobile phone (relative to APP voice communication). Android is based on Linux, so ALSA will also be used, but mainly for control, such as the configuration of codec chip. The driver, codec, pre-processing and post-processing related to audio data are developed on Audio DSP, and the network side is developed on CP (communication processor), which is a bottom-level solution. The software block diagram of the scheme is as follows:

Sound card is also called audio frequency The sound effect card is the most basic part of the computer multimedia system. It is the realization of acoustic wave/digital signal A kind of mutual conversion Hardware . The basic function of sound card is to Microphone , tape, optical raw sound signal To convert, output to Headset,speaker,an amplifier,recorder Equivocal equipment , or by Music Equipment digital interface( MIDI )To produce the sound of a synthetic instrument

For audio processing technology, there are mainly the following:

MME is the interface provided by winmm.dll and the first generation API under Windows platform. The advantage is that it is simple to use and can meet the business requirements in general scenarios. The disadvantage is that it has high latency and some advanced functions cannot be realized.

Also part of DirextX, to replace DirectSound. The audio components in the DirextX suite are mostly used in games and support hardware acceleration, so they have lower latency than MME.

Vista system began to introduce a new architecture. It is an interface provided by COM. In user mode, it is at the bottom. Several API s mentioned above will eventually use it! It has the strongest function and the best performance, but the interface is complex and cumbersome to use.

Four. Wasapi will do (high performance, but more complex)

After the audio collection device collects the audio data, it will call the callback function set in waveInOpen.

The parameters include a message type, according to which corresponding operations can be performed.

If the WIM data message is received, it indicates that new audio data has been collected, so that these audio data can be processed as required.

(to be added later)

2. Use Core Audio to capture the output of sound card

The interfaces involved are:

(to be added later)

I have also done this work. I have searched the following basic mixing algorithms:

ALSA is the mainstream Audio Architecture of linux

Is an open source project with community maintenance: http://www.alsa-project.org/

9. In kernel space, alsa SOC is actually a further encapsulation of alsa driver. It provides some column enhanced functions for embedded devices.

Check the device and determine the device name according to the last two numbers. Usually, default is OK

Define the relevant parameters, and record and play the sound through the same steps, and define them together

Set the parameters, and the error judgment will not be added here, otherwise it will be a little long

During playback, there may be a "Broken pipe" error. Add the following to prepare the device again 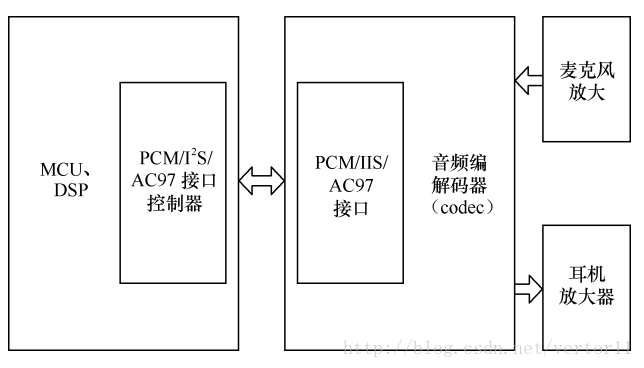 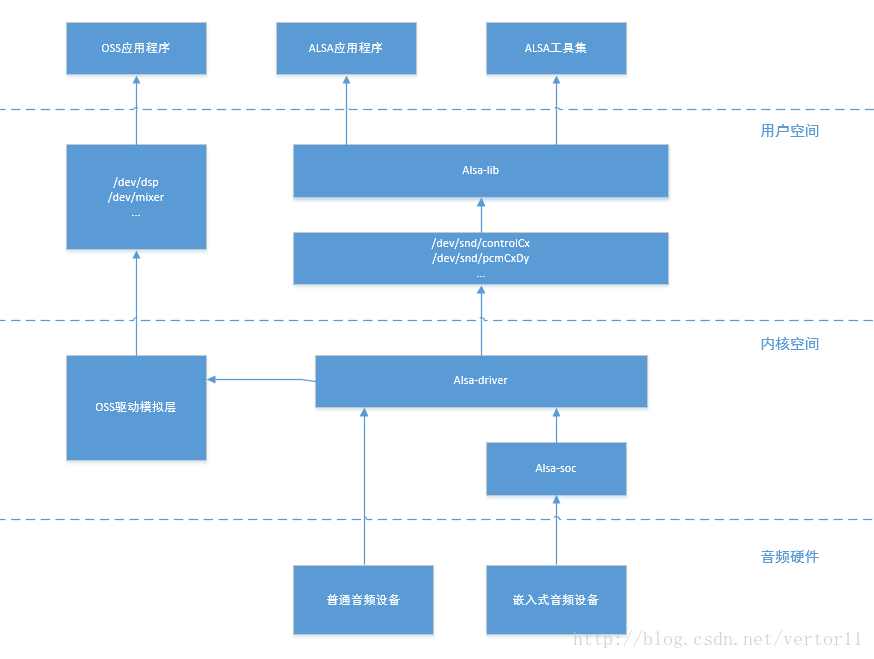 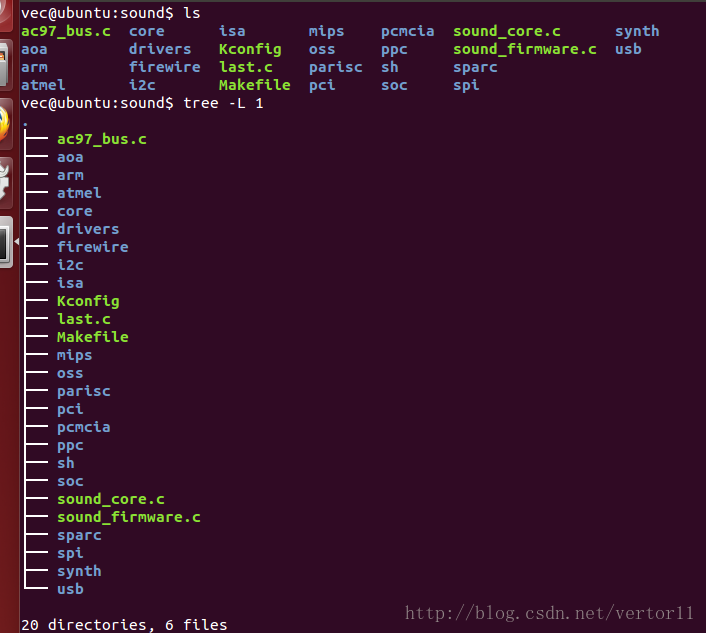 
include/sound: the directory of the ALSA driven common header file.

Although OSS is very mature, it is a commercial product without full open source code after all, and it has basically lost the update in Linux mainline. ALSA (Advanced Linux Sound Architecture) just makes up for this gap. It conforms to GPL and is another alternative sound card driver architecture for audio programming under Linux. ALSA not only provides a set of kernel driver modules like OSS, but also provides corresponding function library for simplifying application programming. Compared with the ioctl based original programming interface provided by OSS, ALSA function library is more convenient to use. The main features of ALSA are as follows. Support a variety of sound card devices.

ASoC audio device driver:
ASoC (ALSA System on Chip) is the development and evolution of ALSA in SoC, which still belongs to
ALSA, but on the basis of ALSA architecture, CPU related code and Codec related code are separated. The reason is that with the traditional ALSA architecture, Codec of the same model needs different drivers when working in different CPUs, which does not meet the requirements of code reuse. For the current development of sound card driver on embedded system, we suggest that readers try to adopt the ASoC framework, which is mainly composed of three parts.

Codec drive. This part only cares about codec itself, and features related to CPU platform are not operated by this part.

Board drive (also known as machine drive). In this part, platform driver and Codec driver are bound together to describe the hardware characteristics at board level.

In the above three parts, 1 and 2 can still be general drivers, that is to say, Codec drivers think that they can connect to any CPU, while platform drivers corresponding to I2S, PCM or AC '97 interfaces of CPU think that they can connect to any Codec that conforms to their interface type, only 3 is not general, and specific CPU and Codec on specific circuit board OK, so it's very much like a socket, with Codec and platform on it. Above the above three parts is the ASoC core layer, which is implemented by sound/soc/soc-core.c in the kernel source code. Looking at its source code, it is found that it is completely a traditional ALSA driver. Therefore, for the sound card driver based on the ASoC architecture, ALSA lib and a series of ALSA utilities are still available. For example, amixer and aplay do not need to make any changes to ASoC. The user programming method of ASoC is the same as ALSA. The Documentation/sound/alsa/soc / directory of kernel source code contains documents related to ASoC.

At present, the mainstream Audio Architecture in linux is ALSA (Advanced Linux Sound Architecture). ALSA provides ALSA driver in the kernel driver layer and ALSA Lib in the application layer. The application program only needs to call the API provided by ALSA lib (libtinyalsa.so)

Operations on the underlying hardware in pairs. That's good, but Android doesn't use the standard ALSA, but a simplified version of ALSA called tinyalsa. In Android, tinyalsa is used to control and manage all modes of audio channels. We can also use the tools provided by tinyalsa to view

Audio frame
This concept is very important in application development. Many articles on the Internet do not specifically introduce this concept.

Audio and video are very different. Each frame of video is an image. From the above sine wave, we can see that the audio data is streaming, and there is no clear concept of a frame. In the actual application, for the convenience of audio algorithm processing / transmission, it is generally agreed that the data amount of 2.5ms~60ms is taken as a frame of audio. 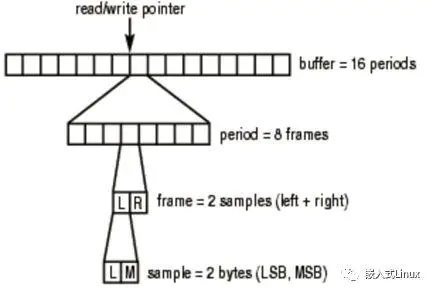 This time is called "sampling time". There is no special standard for its length. It is determined according to the needs of codec and specific application. We can calculate the size of a frame of audio frame:

Assuming that an audio signal has a sampling rate of 8kHz, dual channels, a bit width of 16bit and a frame of 20ms, the size of one frame of audio data is:

Period: the interval between hardware interrupts. It represents the input delay.

The buffer and period size configured in alsa are stored as frames in runtime.

Period ﹣ bytes = PCM ﹣ format ﹣ to ﹣ bits is used to calculate how many bits a frame has. It is often used in practical application

MIC collects natural sound and converts it into analog electrical signal, amplifies the signal amplitude by operation and amplification circuit, and then converts it into digital signal by ADC, (audio coding can be done, such as mp3), (audio decoding can be done), (analog signal can be converted by DAC) (or pulse width modulation PWM can be used to digitally code the level of analog signal), and The power amplifier is amplified and then output to the horn

See what scheme, if it involves more complex calculation, the calculation power of MCU is far from enough, it must be embedded hardware, which involves the development of system level. If it's just simple audio processing, it's OK (such as MP3 rhythm color lamp recording and playing, etc.)

(the software is very simple, just throw the sampling value of wave file into pwm. Of course, the pwm signal generally needs to be added with filter circuit to send to power amplifier and horn. Generally, 16kbps sampling rate is adopted, and the filter circuit will be simple.)

3 DAC + amplifier + speaker, the general voice chip is made in this way, but it should be a special DAC voice chip;

These bus protocols, such as I2C SPI, are used to connect peripheral integrated circuits

In fact, the so-called audio encoder and decoder. In fact, the algorithm is compressed or decompressed by the arithmetic chip after the ordinary AD or DA

The voice quality of waveform coding is high, but the coding rate is also high (WAV);

The coding rate of parameter coding is very low, and the quality of synthesized speech is not high (MP3);

MP3 file is actually a kind of data compressed by MP3 (dynamic image expert compression standard audio level) coding algorithm, which can not be directly sent to the power amplifier, but must be decoded to restore the original audio data before playing.

Basic principle of pulse width modulation (PWM): the control mode is to control the on-off of the switch device of the inverter circuit, so that the output end can get a series of pulses with equal amplitude, and use these pulses to replace the sine wave or the required waveform. In other words, multiple pulses are generated in the half period of the output waveform, so that the equivalent voltage of each pulse is sinusoidal waveform, and the output is smooth and the low-order harmonic is less. By modulating the pulse width according to certain rules, the output voltage and frequency of the inverter can be changed. For example, if the sine half wave is divided into N equal parts, the sine half wave can be regarded as a wave composed of n pulses connected with each other. The pulse width is equal to π / N, but the amplitude is not equal, and the top of the pulse is not a horizontal straight line, but a curve, and the amplitude of each pulse changes according to the sine law. If the above pulse sequence is replaced by the same number of equal amplitude and unequal width rectangular pulse sequence, so that the midpoint of the rectangular pulse coincides with the midpoint of the corresponding sinusoidal bisection, and the area of the rectangular pulse and the corresponding sinusoidal part (i.e. impulse) is equal, a set of pulse sequence is obtained, which is the PWM waveform. It can be seen that the pulse width varies according to the sine law. According to the principle of equal impulse, PWM waveform and sine half wave are equivalent. For the negative half cycle of sine, the same method can be used to get PWM waveform.
In the PWM waveform, the amplitude of each pulse is equal. To change the amplitude of the equivalent output sine wave, you only need to change the width of each pulse according to the same proportion coefficient. Therefore, in the AC-DC-AC converter, the pulse voltage output by the PWM inverter circuit is the amplitude of the DC side voltage.