Using the Kubernetes series from 0 to 1: building the first application

In a Kubernetes cluster, you can create multiple namespaces for "environment isolation". When there are many projects and personnel, you can consider dividing different namespaces according to the actual situation of the project (such as production, testing and development).

View the created namespaces in the cluster:

Deployment provides declarative updates for pod and Replica Set (next generation Replication Controller). Just describe the desired target state in the deployment, and the Deployment Controller will help developers change the actual state of pod and ReplicaSet to the target state. Developers can define a new deployment to create a ReplicaSet or delete an existing deployment and create a new one to replace it. Pod can be managed more easily with deployment, including capacity expansion, capacity reduction, pause, rolling update, rollback, etc. In Choerodon, deployment is presented by means of examples, and diversified functions such as online upgrade, stop and delete are supported.

Write a file named dp.yaml, which reads as follows:

After saving, deploy with kubectl command:

You can execute the following command to view the deployed Deployment:

You can execute the following command to view the Pod created by Deployment:

The status of the Pod is Running, which indicates that it is working normally and can be accessed through the Pod IP in the cluster:

For more information about Deployment, please refer to here:   https://kubernetes.io/docs/concepts/workloads/controllers/deployment/

Kubernetes pods have a life cycle. They can be created or destroyed, but once destroyed, their life ends forever. Pod can be created and destroyed dynamically through Deployment. Each pod will obtain its own IP address. However, these IP addresses are not stable and fixed. These IP addresses will also be recycled when the pod is destroyed. This will lead to a problem: in the kubernetes cluster, if a group of pods (called backends) provide services for other pods (called frontends), how should those frontends find and connect to which backends in this group of pods?

Here we would like to solemnly invite Service to solve this problem.

Write a file named svc.yaml, which reads as follows:

You can execute the following command to view the deployed services:

You can see that the Service corresponding to the Pod has been built, and this "correspondence" depends on the mapping between the Selector in the Service and the Labels of the Pod (that is, the contents of the Selector and the Labels of the Pod must be consistent). Nginx can now be accessed inside the cluster through this Service. Choerodon provides visual Service creation operation, which makes it more convenient to create a network:

For more information about Service, please refer to here:   https://kubernetes.io/docs/concepts/services-networking/service/

At this time, only the host inside the cluster and the host can access Nginx. To enable other hosts outside the node to access, you need to create ingress. Ingress can provide services with URL, load balancing, SSL termination, HTTP routing and other functions for external access to the cluster. Ingres corresponds to the domain name in Choerodon. In addition to domain name management, Choerodon also adds domain name certificate management to support online application and import.

Write a file called ing.yaml, which reads as follows:

You can execute the following command to view the deployed progress:

At this point, you can access Nginx using the defined URL in the browser:

For more information about Ingress, please refer to here:   https://kubernetes.io/docs/concepts/services-networking/ingress/

After watching the application building of traditional Kubernetes, let's take a look at how to build applications in Choerodon.

Application building based on Choerodon

What did Choerodon do behind the construction of the application? I have to mention GitOps.

Choerodon uses Kubernetes as the basic platform, packages the application through Helm Chart, and abstracts Helm Release into Kubernets custom object. In this way, the state of the deployment application system of the whole environment can be described through Kubernetes resource object file. In Choerodon, the yaml file finally generated by the application build is stored in GitLab in the form of configuration library. The build status of the application is judged by comparing the changes of the configuration yaml file, so as to realize the separation of business code and configuration code. 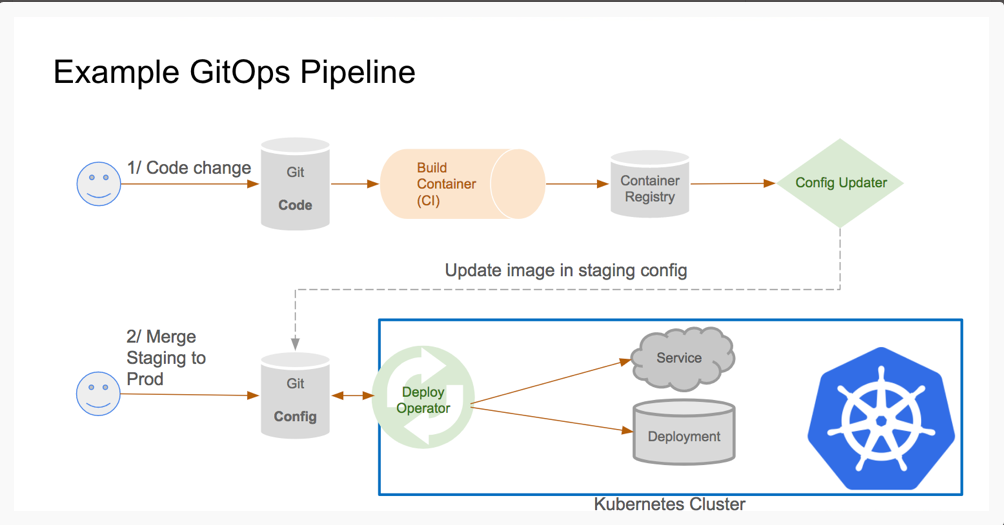 As can be seen from the above steps, K8S provides basic objects such as namespace, deployment, service and progress from the builder to external access. On this basis, Choerodon pig toothed fish platform constructs a set of environment, instance, service and domain name objects for mapping, including rolling upgrade, fault tolerance improvement and service test, and manages them with friendly UI interface management, so that users can simply operate Kubernetes objects through the page, so as to create their own applications.

This article is original by the technical team of pig toothed fish. Please indicate the source for reprint