How does fat cluster adapt to various security and compliance requirements within the enterprise organization, as well as the IT environment such as network and security domain;

One server can't support the computing power demand of Federated learning. How to deploy multiple computing nodes and manage them easily;

If some nodes have problems, whether they have self-healing ability to ensure the reliability of services;

Whether it can realize horizontal expansion and adapt to the growth of business;

Whether fat version can be well upgraded and managed;

Whether there can be different federations in an organization, how to manage multiple clusters according to the needs of different businesses, partners and application scenarios.

Kubernetes is the most popular infrastructure platform at present. A large number of practices have proved that kubernetes is very suitable for internal operation and maintenance of large-scale distributed system platform. According to Ovum, by the end of 2019, half of the big data load was running on Kubrenetes. Our team also recommends kubernetes as a platform to run the fat federated learning cluster production environment. KubeFATE provides a solution for deploying O & m fat in kubernetes. 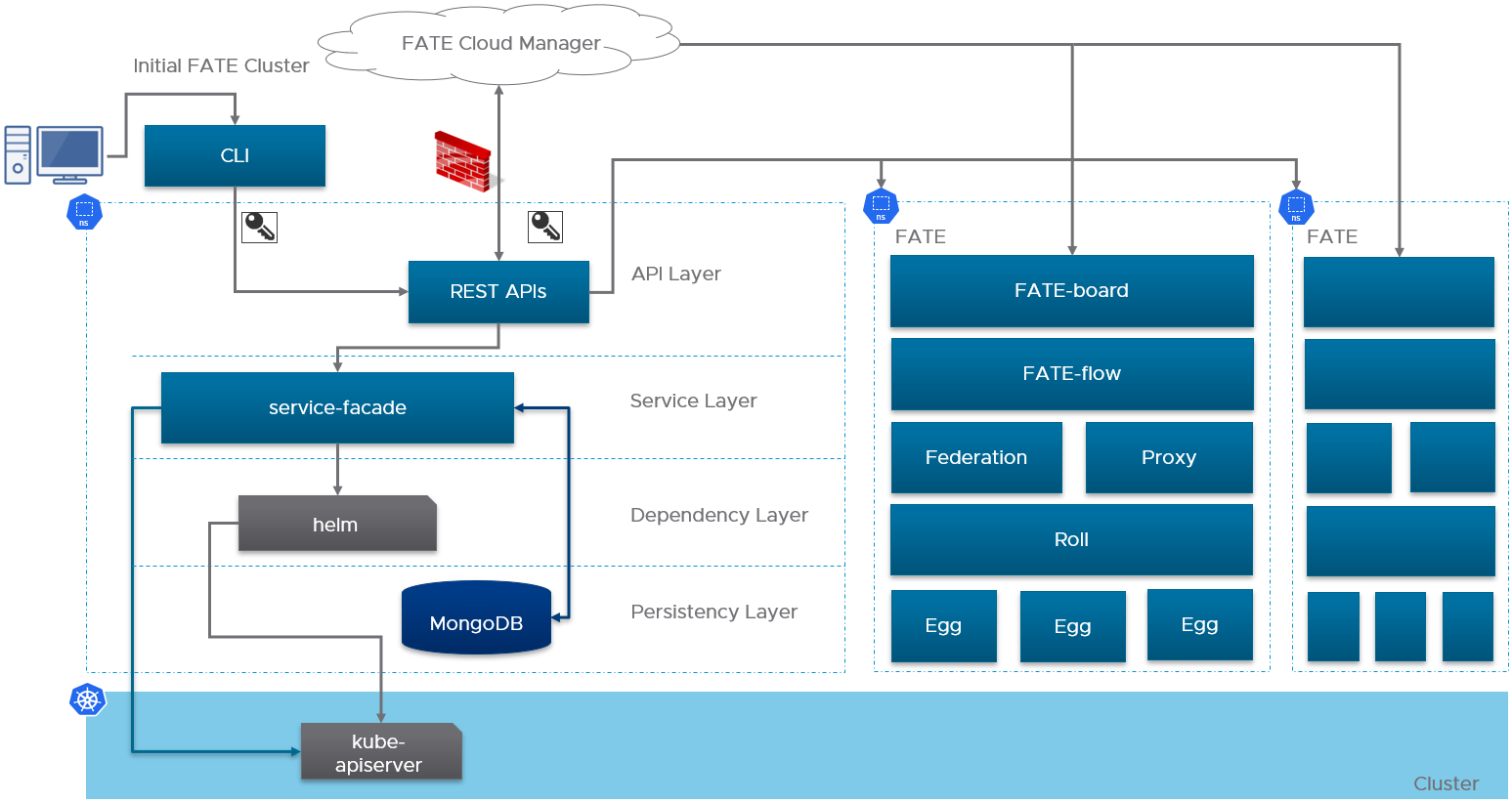 In order to better experience the function of KubeFATE, we will demonstrate step by step how to deploy a two-party federated learning cluster using KubeFATE and verify it. The final deployment structure is as follows: 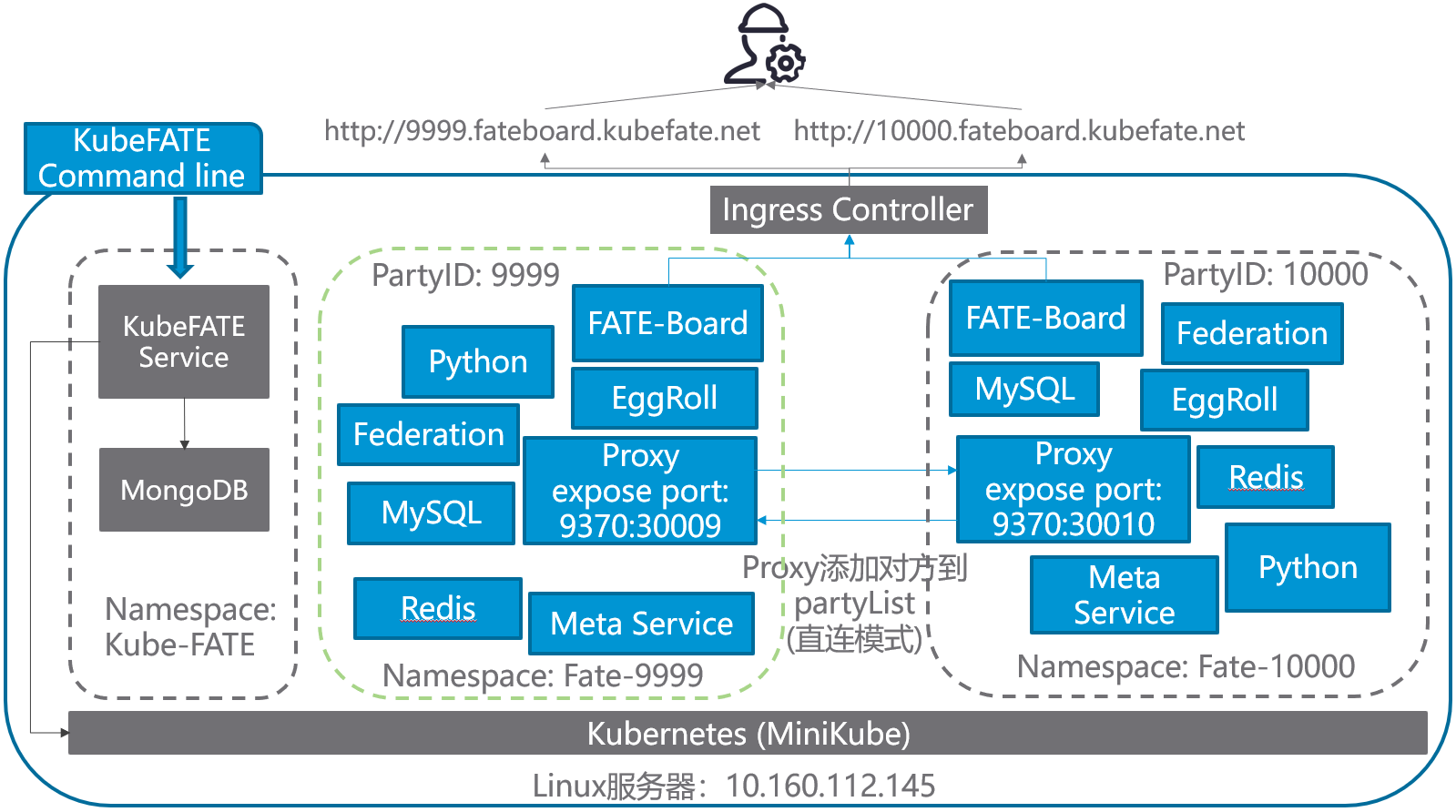 There are two machines in this paper:

The machine used for Demo is a Linux machine. Refer to the first point of the precondition;

Using a browser to access the fat board's machine requires access to the machine used to execute the Demo.

In order to deploy fat using KubeFATE, we need the following tools:

After execution, you can verify whether it is successful,

From the KubeFATE Release page on Github, we find the download package deployed by Kuberetes and download it,

Then we can view the contents of the downloaded and unzipped installation package,

Because the KubeFATE command line is an executable binary, it can be moved directly to the path directory for easy use,

Then we test whether the kubefate command is available,

At this point, the tools we need have been installed.

Follow the on-screen instructions and wait a minute. When the command returns without error, we can verify that,

If your display is the same as above, Congratulations, a single node Kubernetes has been deployed in your server! However, there is still a small step to be done, because KubeFATE provides services through Ingress, and MiniKube does not start Ingress module by default, so it needs to be started manually,

Here, our Kubernetes is ready.

The related yaml file rbac-config.yaml has been included in our installation package, and the previous preparations have extracted this file to your working directory. We just need to do it directly,

Add kubefate.net to the hosts file

After adding, you can verify whether it takes effect:

At the same time, if we execute kubefate version again, the display will be as follows,

Now that all the preparations are finished, we can start to install fat. It should be noted that the above work only needs to be done once. If fat clusters are added, deleted or updated later, the above work does not need to be executed again.

According to the previous plan, we need to install two alliance parties with ID 9999 and 10000 respectively. In reality, these two parties should be completely independent and isolated organizations. In order to simulate the reality, we need to create their own namespace on Kubernetes first.

The KubeFATE installation package contains a brief configuration reference file cluster.yaml for cluster configuration. We can copy one copy to each participant to modify the configuration. If the previous steps are correct, the file is already in the working directory. Run the following command to copy the file:

The main modifications are as follows:

The configuration of fate-10000.yaml is modified as follows,

Similar to the modification of fate-9999.yaml,

If everything is OK, you can use kubefate cluster install to deploy the two fate clusters,

In this step, you need to go to the Docker Hub to download the relevant images, so the specific speed has a lot to do with the network speed of the server. If the network speed is fast or the image is ready to be on the server, it can be deployed in about 2 or 3 minutes. We can use the kubefate job ls command to observe the deployment,

If the STATUS is found to be successful as above, the deployment is successful.

Toy example is a fast test case for cluster connectivity provided by fat. The test script sets 10000 as the host side and 9999 as the guest side. We use the cluster mode. For details of this example, please refer to: README of toy example

Fat stipulates that the guest side initiates training, so we need to enter the python container of fat-10000,

Where python-dc94c9786-8jsgh is the ID of Python pod (note that the ID of the following command needs to be replaced with the specific ID value returned by the above command). We use the kubectl exec command to enter the container,

And run toy example in the container,

If your output is similar to the above, you will finally return INFO: success to calculate secure_sum, it is xxxx, which means the training is successful, in other words, fat cluster is installed successfully.

If we don't have a DNS service, we need to match the hosts on the machine that accesses the above domain name, that is, the machine where the browser is located, so that the above domain name points to the server where fat is deployed. In this example, it is 10.160.112.145, which needs to be configured according to your actual IP address. If it is Mac OS or Linux, you can use the following command to configure,

If it's Windows, we need to

Add it to C:\WINDOWS\system32\drivers\etc\hosts. For specific methods, please refer to related materials. Then we can use the browser to access the fat board of Party-9999 and Party-10000.

Party-9999 will be displayed as host task completed 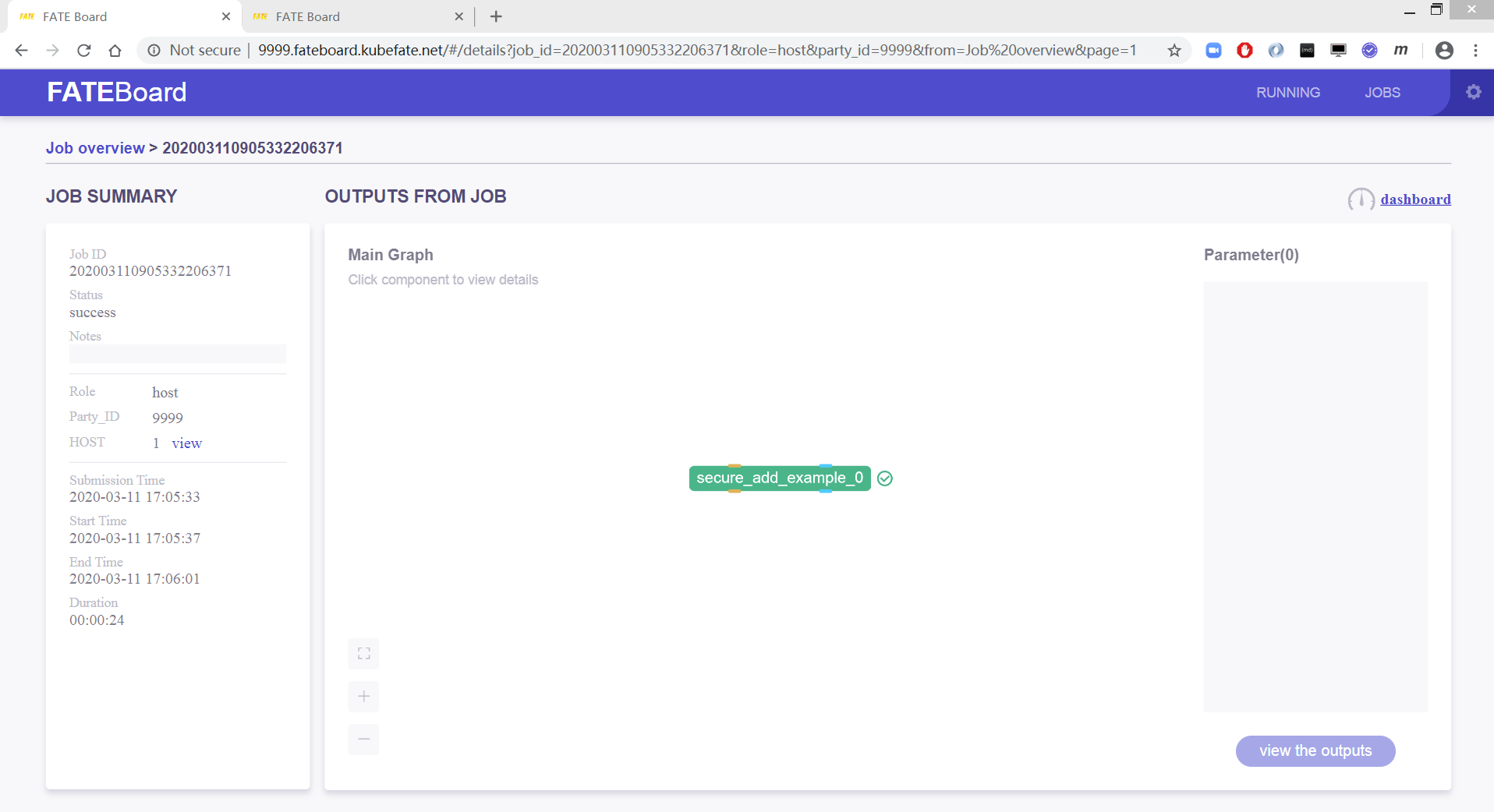 Party-10000 will be displayed as guest end task completion 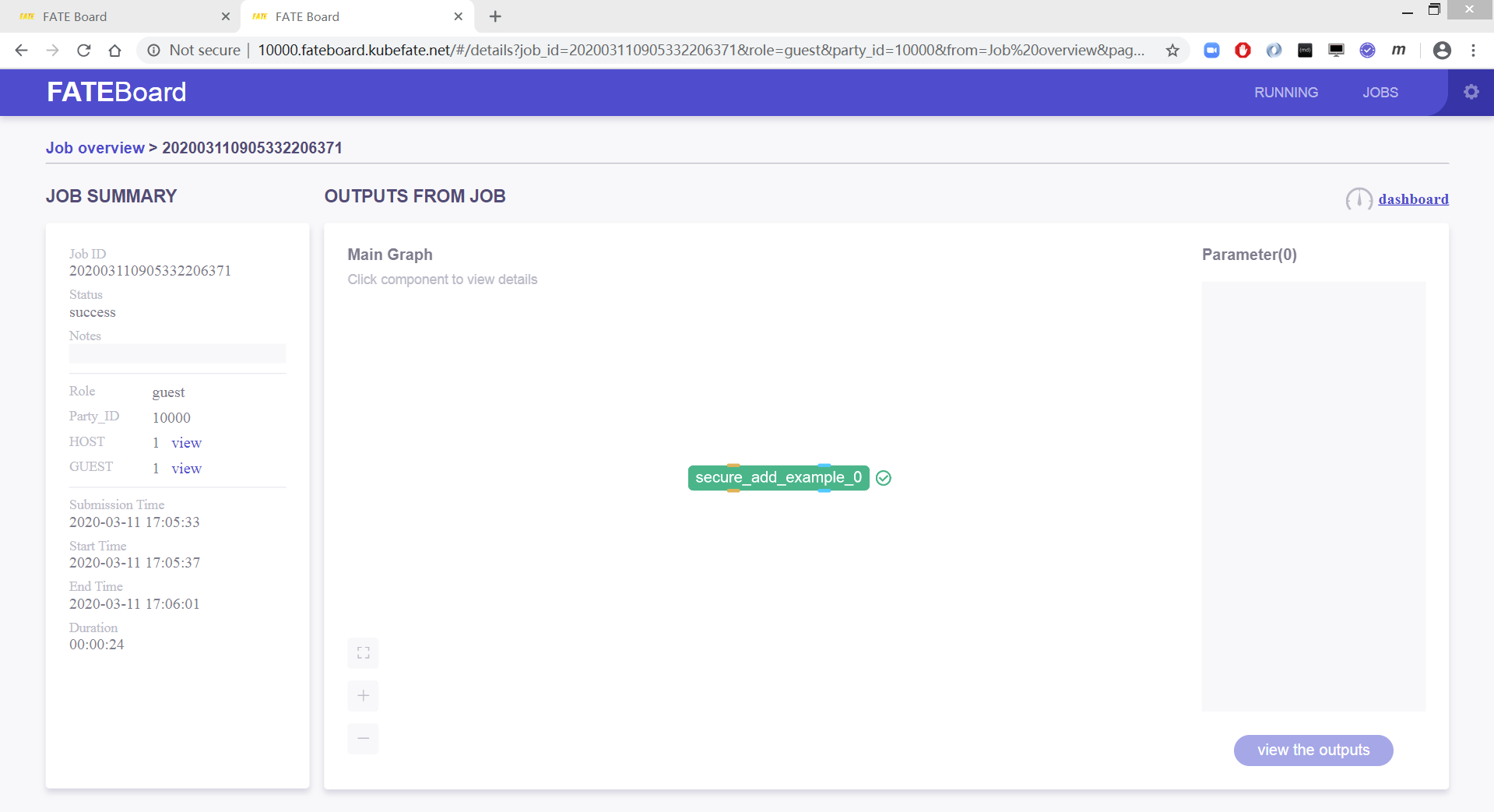