I'm going to move most of this article. Don't scold me

When a Java program runs, the system always identifies all objects by the so-called runtime type. This information records the class to which each object belongs. Virtual machines usually use this information to select the correct objects and methods for execution, and the class used to store these types of information is class. Class encapsulates the running state of an object and interface. When a class is loaded, the object of class is created, that is, the object of class encapsulates the type information of a class. The operation of class can be realized through the operation on the object, which is the principle of reflection.
Since the object of Class encapsulates the information of a Class, this information generally includes Class name, implemented interface, parent Class, member method, member variable, annotation and other information, that is, we can manipulate this information.
Each instance of Class represents a running Class
Class class has no public constructor, which means that it cannot create an instance through new. Class objects are created by the jvm.
At the same time, you need to know that in the JVM, each class has only one unique class object, and identifying a unique class is through its fully qualified name and its class loader. When running the program, the JVM will first judge whether the current class has been loaded in the cache, that is, the findLoadedClass method. If it is not loaded, then the loading permission will be handed over to the parent loader of the current class loader for loading, and the parent loader will continue to submit the loading permission upward. After knowing that the parent class of a certain level loader is null, the loading permission of this class will be handed over to the startup class loader. If the startup class loader cannot load this class, the loading permission will be handed over to the next time in the reverse order, Until the class is successfully loaded at a certain level, this is the parent delegation mechanism of java. We will observe this mechanism from the code level below. The class loader loads classes through the loadClass method. In the loadClass method, the lowest level of class loading calls a method called findClass, which loads the class file into memory, and then converts the bytecode into a java Class object through the defineClass method.
We can get a Class object in the centralized way shown below 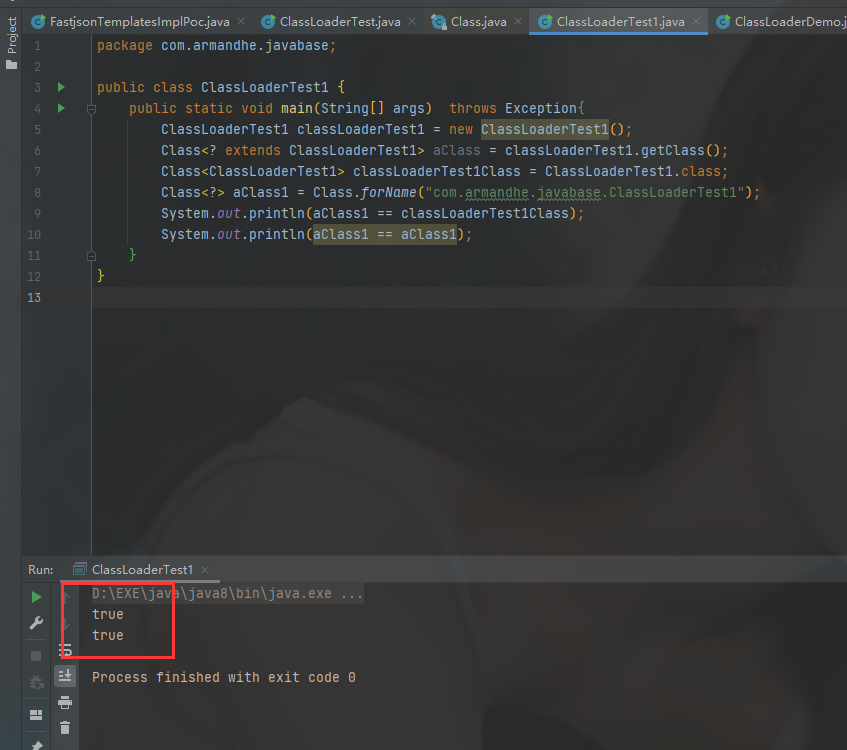 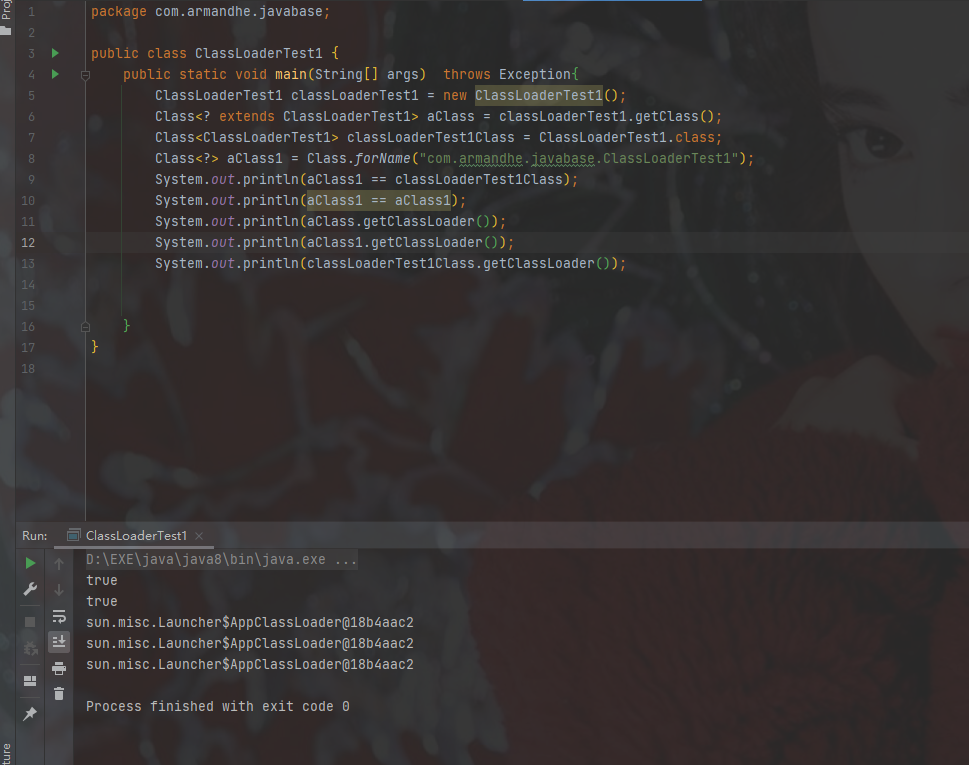 Later, we will demonstrate the different effects of class loader.
Let's take another look at the following effects: 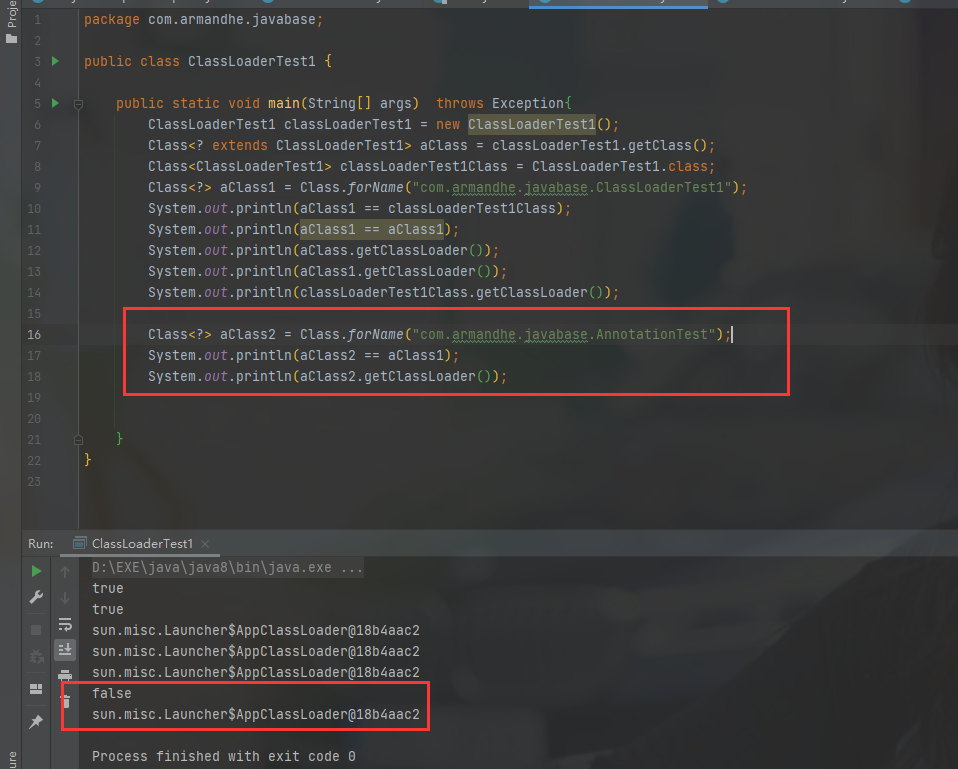 Here we load two classes with different names. Of course, their Class instances are not equal, but their Class loaders are the same. According to the above theory, as long as there is a difference between the Class loader and the fully qualified name, the Class instances of the two classes are not equal.
It can be described with the following figure: 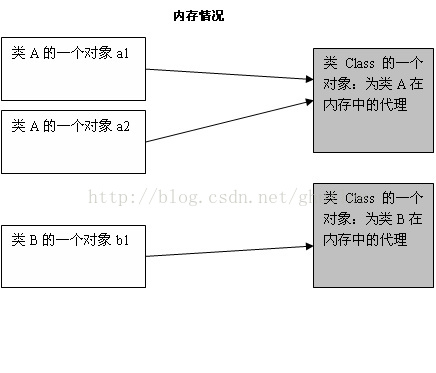 As mentioned above, when loading a Class, the JVM will first create a Class instance of the Class, which stores all the fields, methods and other information related to the Class. Through this instance, the corresponding Class object can be generated. In Java, Class instances can be generated manually. This feature breaks through the shackles of manually generating Class objects, and Java implements the reflection mechanism through this feature.
Reflection is to know all the properties and methods of any class in the running state; For any object, you can call any of its methods and properties; And can change his attributes.
I won't talk about the details of java reflection. The main methods used are several methods to obtain attributes, methods and construction methods.

The three truncations after loading are collectively referred to as the connection phase.
The verification phase is described as follows:

For the initialization phase, the virtual machine specification specifies that there are and only five situations in which classes must be "initialized" immediately (and loading, verification and preparation naturally need to start before this):

Class loading means that the loader has a fully qualified name of a class to read the binary byte stream of this class into the JVM, and then convert it into a class instance object corresponding to the target class. Three built-in class loaders are provided in the JVM: startup class loader, extension class loader and application class loader.

The startup class loader is used to load the classes required by the JVM itself. This class loader is implemented in C + +, has no parent class, and its parent loader is null. It is responsible for loading the core class library under% JAVAHOME%/lib or the jar package under the path specified by the - X bootclasspath parameter into memory. The startup class logger only loads classes starting with Java, javax, sun, etc. If I want to load a java.lang.String class now, but the class is not in the above directory, its loading permission will be sent to the startup class loader due to the parental delegation mechanism, but it will not be loaded because it is not under the above directory. This ensures that the core class library of Java will not be polluted and tampered with, which is the charm of the parent delegation mechanism.

The extension class loader is implemented by ExtClassLoader, which is the internal static class of sun.misc.Launcher. It is responsible for loading% Java_ The class library in the home% / lib / ext directory or in the path specified by the command - Djava.ext.jar. 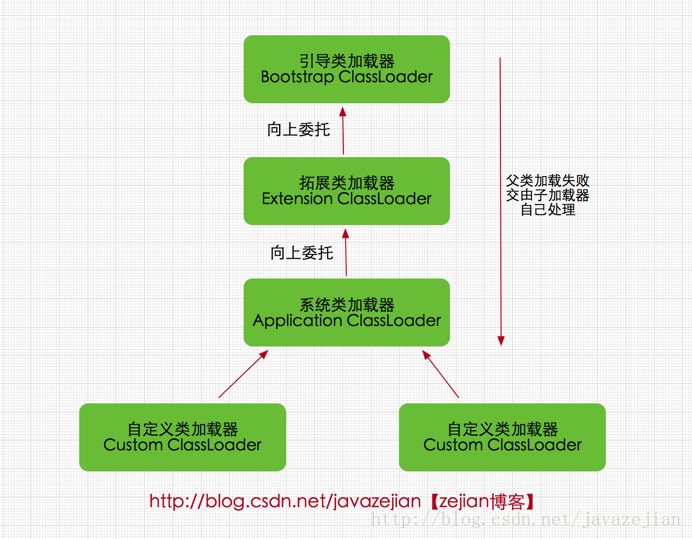 Let's understand the parental delegation mechanism through the following figure: 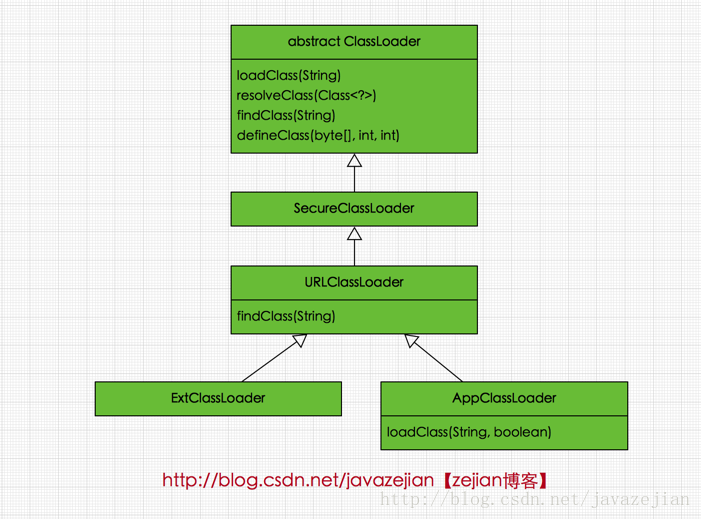 As can be seen from the figure, the top-level class loader is ClassLoader class, which is an abstract class. All subsequent class loaders inherit from ClassLoader (excluding startup class loader). Here we mainly introduce several important methods in ClassLoader.

Let's look at the code of AppClassLoader#loadClass

We have built a security manager. We don't know what it means. It hasn't reached that point yet. The main code is the following if judgment.
First, use the findLoadedClass method to find out whether the current class has been loaded in the cache. If it has not been loaded, call the super.laodClass method to load the class. We follow up the super.loadClass method:

The constructor of the parent class is called here. Note that the second parameter here is null. Let's follow:

Here, we see that we continue to call the constructor of the parent class, and continue to follow:

Here, we can see that this.parent is assigned as the passed formal parameter parent, and the parameter value is null, so the parent class of the extension class loader is null.

The getClassData method loads bytecode data from the file system:

classNameToPath is the logic to convert the entered file name to the corresponding path:

Such a simple logic of the findClass method is implemented. The complete code is as follows:

As mentioned above, there is a parameter var2 in the loadClass method. If var2==true, the resolveClass method is used. Using this method, the Class object of the Class can be created and resolved at the same time. As we said earlier, the link phase is mainly to verify the bytecode, allocate memory for Class variables and set the initial value, and convert the symbol reference in the bytecode file into a direct reference.
There is also a thread context loader, which can't be written!!! Go and read the original
jdbc uses the thread context loader. Generally speaking, the thread context loader uses the system class loader, but in some middleware, it uses the custom class loader, such as tomcat.