In our embedded linux development process, we often use multi process and multi thread development. In the process of multithreading, we may encounter that a thread occupies cpu for a long time, resulting in abnormal execution of the device.

There are usually only four or five threads. We can catch abnormal threads through thread debugging. If there are about thirty or forty threads running on the device you develop, we can't see which thread has a problem at once, nor can we use the enumeration method to search, At this time, we need to cooperate with some tools to monitor and check the threads under the process we execute. Now I will introduce to you some examples that I have actually encountered in my work.

In my work, I encountered such a problem. When my device was running, I found that the machine was running in some strange States, and the processing response to some mechanisms was not timely. Finally, the top check found that some threads in a process I was running had a high cpu share, resulting in that some other threads could not run in time.

After finding the problem, we will start to find the corresponding thread and modify it. As mentioned earlier, there are one or two threads in the process. Fortunately, we can use some basic methods to output log or other information by threads. However, if there are many threads in a single process, how can we check it?

The above are some commands and operations I have used. Next, I will analyze and introduce them one by one:

First introduce each tool and command in detail, and then use a small example to illustrate the combination of these tools.

First of all, let me give you a detailed introduction to these tool manuals:

Description of ps options and parameters:

The ps command should be familiar to everyone in linux. ps is the abbreviation of Process Status, which is used to list the currently running processes in the system. Use this command to determine which processes are running and running status, whether the process ends, whether the process is dead, which processes occupy too many resources, and so on. The progress listed in the ps command is a snapshot of the current process, that is, it is not dynamic, but the state at the moment when the command is executed.

View the threads corresponding to the process

View the execution time of the corresponding thread of the process 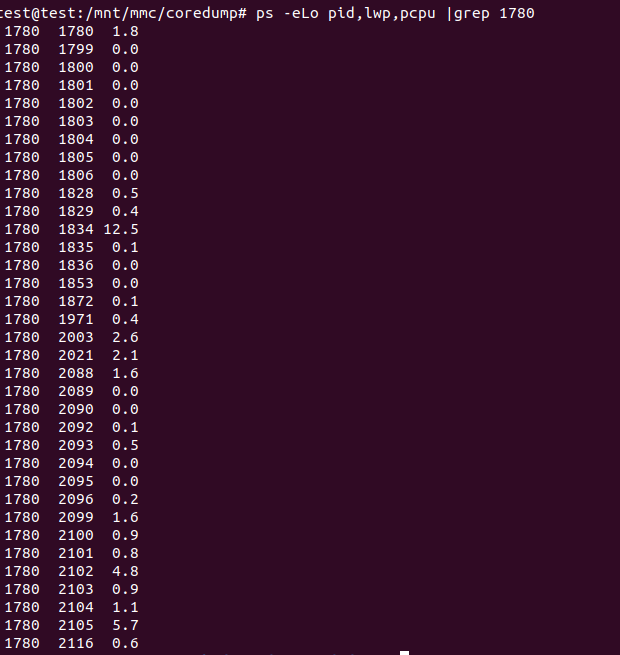 The top command is also a familiar command. It can display the relevant information of the process being executed by the current system, including process ID, memory utilization, CPU utilization, etc. You can also send a signal to the specified process.

The first line, the task queue information, is the same as the execution result of the uptime command


The specific parameters are described as follows:

load average data is the number of active processes checked every 5 seconds, and then calculated according to a specific algorithm. If this number is divided by the number of logical CPU s, when the result is higher than 5, it indicates that the system is overloaded.

In the second line, Tasks - Tasks (processes). The specific information is as follows:

The third line is cpu status information. The specific attributes are described as follows:

The fourth line, memory status, details are as follows:

In the fifth line, swap exchanges partition information. The specific information is as follows:

The seventh line is as follows: the status monitoring of each process (task), and the item column information is described as follows:

This is the information obtained from the regular use of top. We usually use the combined command. I usually use it,

Through the - Hp command, I can view the threads of the specified process 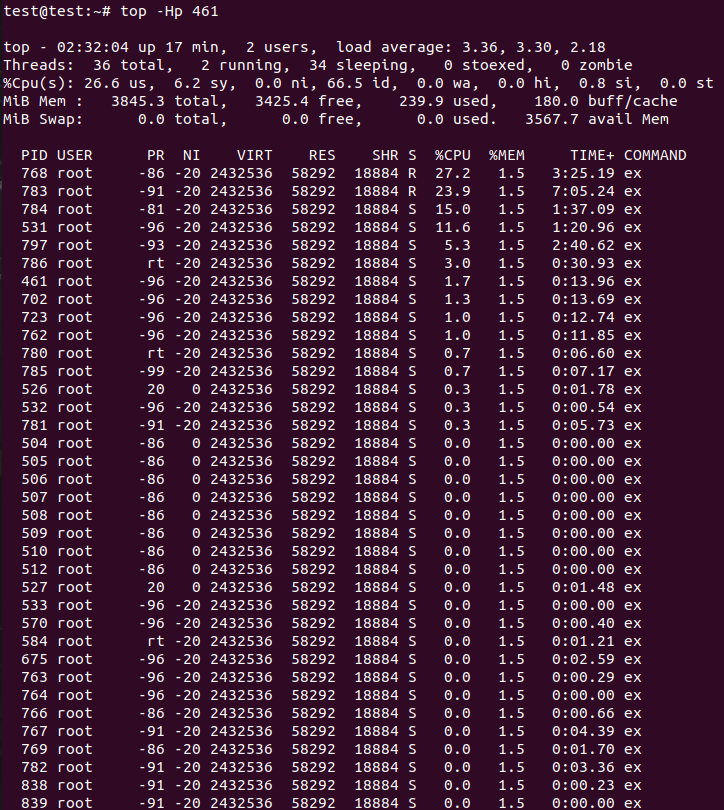 In the third line of the statistics, you can see that the cpu usage is mainly in user mode.

Introduction to pstack options and parameters:

pstack is a command-line tool under Linux system. This command can display the stack snapshot of each thread of the specified process to facilitate troubleshooting program exceptions and performance evaluation. The only option allowed by this command is the PID of the process to be checked. If you want to use this package, you need to add this tool to the linux lib and bin directories you use.

You can execute pstack several times over a period of time. If you find that the code stack always stops at the same position,
That position needs to be focused, which is likely to be the problem;

Introduction to the options and parameters of ltrace:

Introduction to the options and parameters of ltrace: 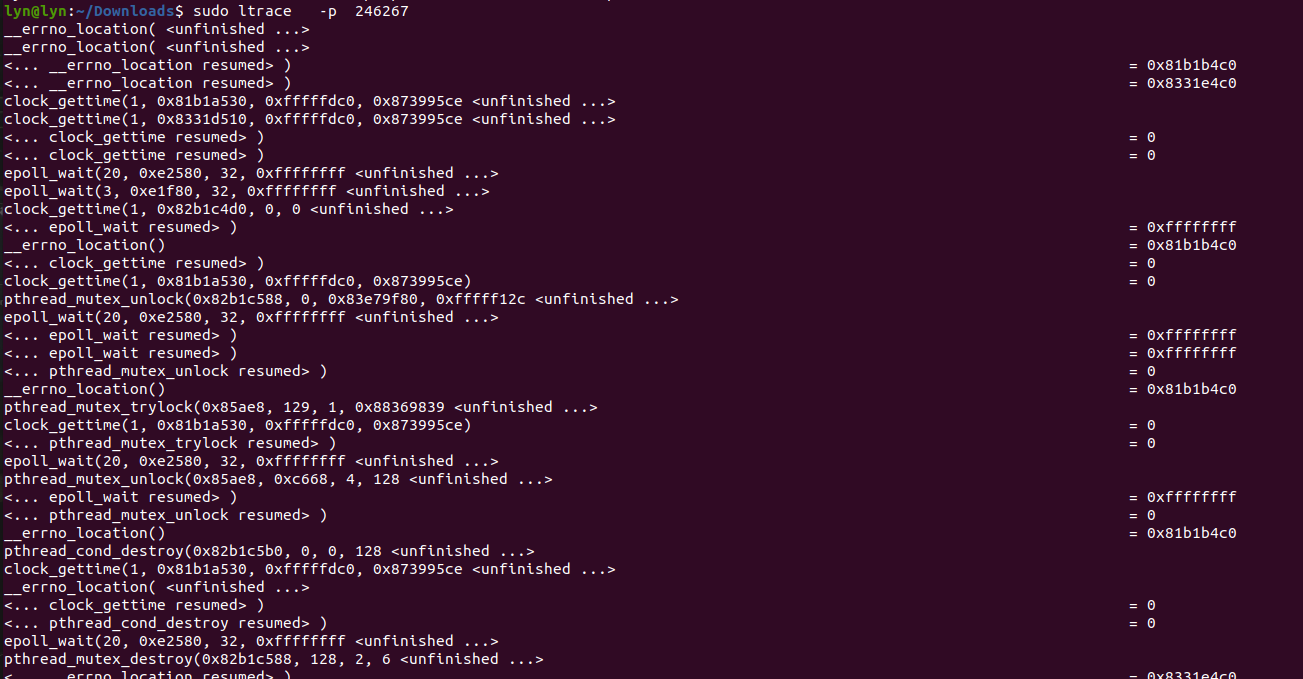 Description of strace options and parameters: 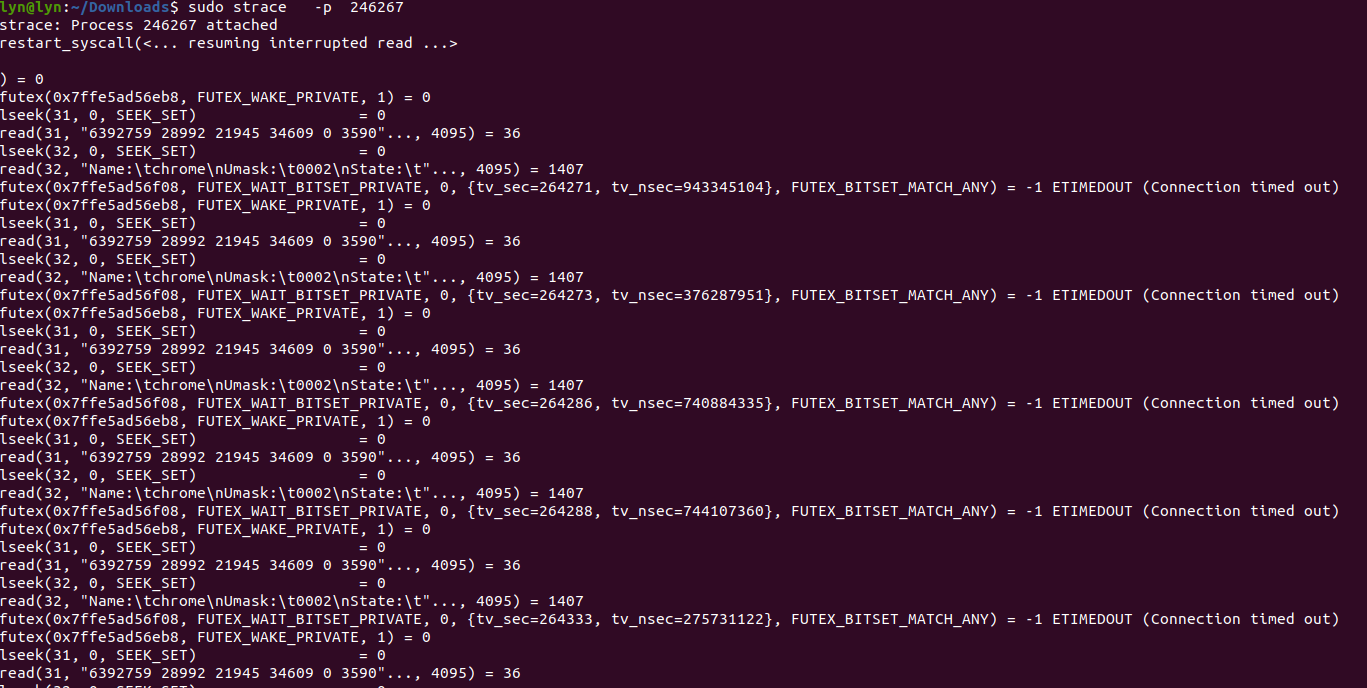 By observing the system call, we can confirm the behavior of the current program and analyze whether its consumed time and return value are normal. You can filter the specified thread number to confirm whether the behavior of the current thread meets the expectation. If there is no output after executing the command, you can doubt whether it is blocked due to network, IO and other reasons, or the program has deadlock.


Introduction to pstree options and parameters:

The command displays all processes in a tree view. The tree view will take pid (if specified) or init as the root. If a user id is specified, the tree view will only display the processes owned by the user. If you want to use this package, you need to add this tool to the linux lib and bin directories you use. 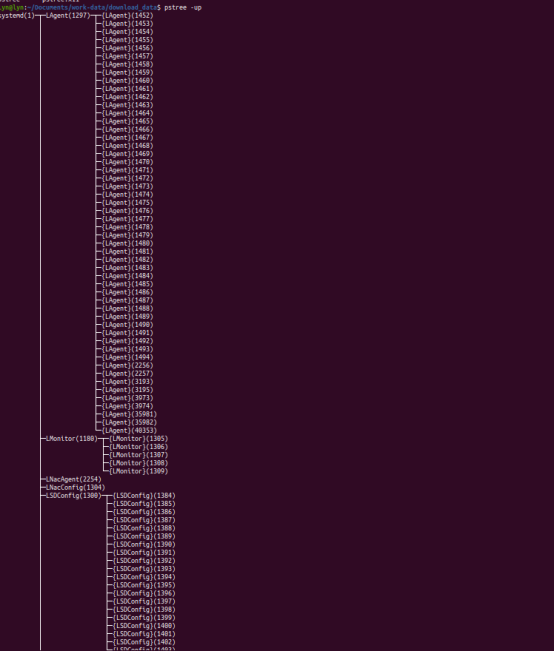 Because sometimes there are not all the tools under the linux environment we use. For example, pstack mentioned above to view the corresponding thread will be replaced by other commands and tools. Here I will introduce two methods I use to view my actual stack and corresponding pid thread information.

If you don't know the corresponding number for the signal you need, you can use the kill -l command to query.

As for viewing the corresponding stack information through coredump, my previous article is more comprehensive, so I won't repeat it here. You can click this article to view it
Linux development coredump file analysis and actual combat sharing.

Enter k first to enter the kill option of top

Then enter the specified pid 461 as prompted

After using enter, I input the signal according to the prompt, and I selected 11 (segment error signal)

This operation is equivalent to kill -11 461

This is too laggy debugging tool in gdb, which specifies the real time debugging process. But in fact, it encountered large code and debugged too. So it basically doesn't need real-time debugging. I use it to do some real-time stack information and check the match between thread id and actual code.
The operation is also relatively simple. From the above, we can know the pid of the process you are running. You can debug by specifying the pid with gdb attach. The operation command after entering is the command for gdb debugging. 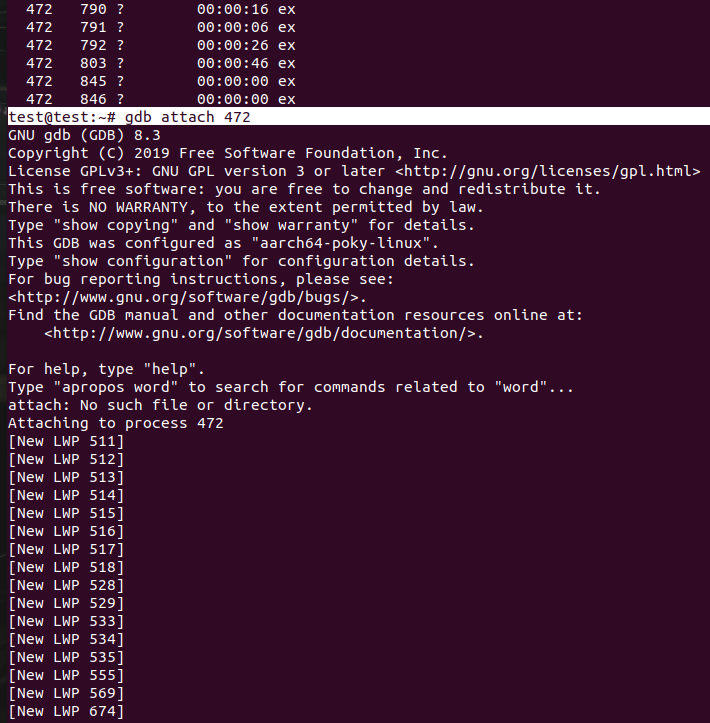 You can see that as soon as gdb attach comes in, the corresponding lwp thread pid is displayed in the front. This pid is consistent with the pid information printed by top command, ps command, strace and ltrace. Through the same pid, we can know the specific operations performed under the process or thread.

Enter the gdb command thread apply all bt, and we can see the stack of the corresponding thread. Through the stack information, we can find the code in reverse.
The following is an interception, showing a stack information of lwp 790 (thread pid==790). Through #3 we can know the thread code in event_ Line 40 of manager.cpp

Combined use in actual combat

Through the above command introduction, we also know which tools we can use under linux to analyze our abnormal processes and threads. Next, I will introduce the combined use of these tools to you through a case I actually encounter.

First, I use the top command to check my cpu usage

This shows that the ex process occupies 176% of the cpu (my device is a multi-core device), that is, almost two cores of cpu are full. At this time, you can see that the cpu resources mainly occupied are user state resources, so it is recommended to use ltrace for viewing. However, there is no package in my device at present, so I directly use strace for viewing.

Next, I want to know which thread in the process, which part of the code the thread corresponds to, and what operations it frequently performs.

Therefore, I first used top -Hp 461 to check the percentage of cpu executed by all threads under the corresponding process. 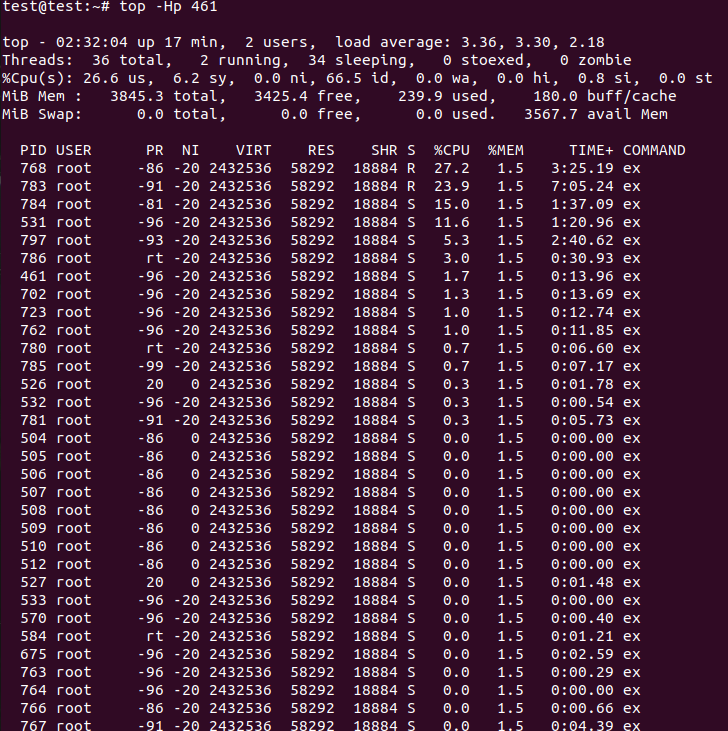 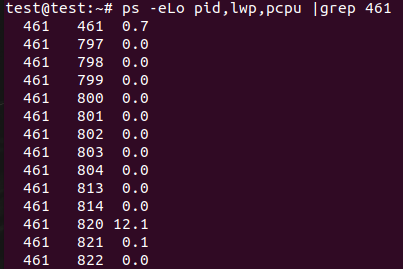 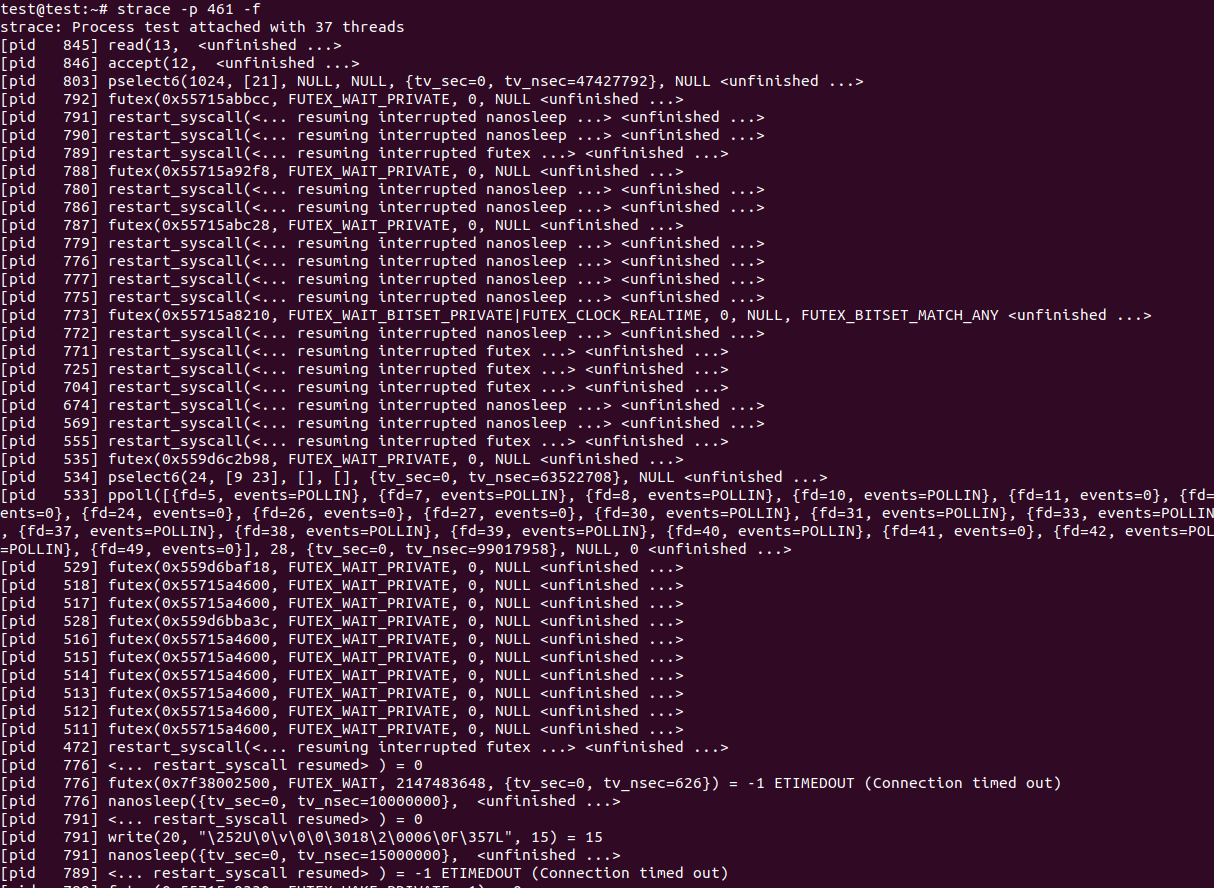 The leftmost part is the thread PID under the corresponding execution IO function. At the same time, we can directly specify the thread PID to query the thread. For example, when we see that thread 845 is reading a device with fd 13, we can separate strace -p 845

Originally, strace, ltrace and pstack should be used together, but there are no ltrace and pstack on the device I use, so I use gdb attach to directly debug the process and view the corresponding thread stack information to confirm that the thread pid information of the top combination command is mapped with the actual code.

LWP < PID > is displayed at the top of each stack information, so you can check the code.

At this time, we know which threads are under the process. We also need to know which part of the code the thread corresponds to and what operations the thread performs.

Strace and gdb attach commands are good technologies from the beginning of development, but in actual use, due to the complexity of the code and the limitation of c and cpu, in my use of strace and gdb attach, these tools will occupy your cpu resources because they have to monitor the process all the time. Even gdb attach starts debugging, the machine runs very slowly directly, and the remote ssh login is stuck. Therefore, you can only use some operations that consume less resources to view information, such as mtrace and valgrind in memory analysis. Once it is started and used, the machine will directly stop. So many times, although the tools are good, they can only help. More importantly, we should write code in a standardized way.

This is how I share some linux thread monitoring operations I use in my work. If you have better ideas and needs, you are also welcome to add my friends to communicate and share.

Author: conscience still exists, hard work during the day, original public number owner at night. In addition to technology, there are some life insights in official account. A serious driver who drives the contents of the workplace is also a rich person living outside technology. And basketball is a photo and music. Follow me and walk with me.

[1]On the court, I bowed my head to the RMB player

[3]How does the program in the CPU run Required reading

All the original dry cargo of the official account has been organized into a catalogue, and the reply is made available.