This article teaches you to batch operate Excel files with Python

When you need to process Excel files in batches at work, are you still processing them manually one by one? Learn the following automatic batch processing methods and bid farewell to the mechanical and inefficient work!

In Chapter 2 of the book compare Excel and easily learn Python report automation, we introduced how to install Anaconda and how to write code using Jupyter Notebook.

But do you know where the code written in the Jupiter notebook is stored on the computer? Do many readers not know? It's easy to know. Just enter the following code in Jupyter Notebook and run it.

Running the above code will get the following results.

The above file path is the path where the Notebook code file is located. Under which file path your code is stored, you will get the corresponding results.

2 get all file names under a folder

We often import local computer files into Python for processing. We need to know the storage path and file name of the file before importing. If there are only one or two files, you can manually enter the file name and file path, but sometimes there are many files to import. Manual input efficiency will be relatively low, and code is needed to improve efficiency.

There are four Excel files in the folder shown in Figure 1.

We can use os.listdir(path) to get all the file names under the path. The specific implementation code is as follows.

Running the above code will get the following results.

Renaming files is a high-frequency requirement. We can use os.rename('old_name','new_name ') to rename files. old_ Name is the old file name, new_ Name is the new file name.

Let's first create a new folder called test under the test folder_ Old file, and then use the following code to put test_ Change the old file name to test_new.

After running the above code, go to the test folder to see test_ The old file no longer exists, only test_new.

When the following code is run, it means that a new folder named test11 is created under the D: / Data Science / share / data path. The effect is shown in Figure 2.

Deleting a folder corresponds to creating a folder. Of course, we can also choose to delete a folder manually, or use OS. Removediers (path) to delete, indicating the path to delete.

When the following code is run, it means that the test11 folder just created is deleted.

When we run the following code, it means that we will test in the test folder_ The new file was deleted.

Sometimes a folder contains multiple similar files, such as the performance files of different people in a department. We need to read these files into Python in batch and then process them.

We learned earlier how to read a file with load_work(), or read_excel(), no matter which method is adopted, you only need to indicate the path of the file to be read.

How to batch read? First get all the file names under the folder, and then traverse and read each file.

After running the above code, 12 folders will be created under the file path, as shown in Figure 3. 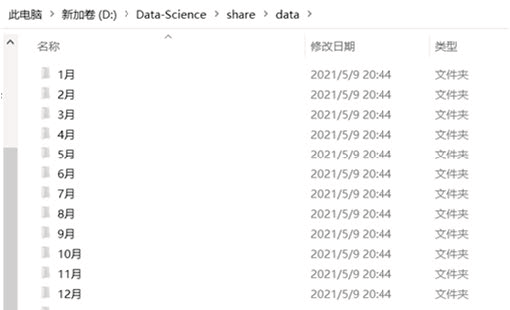 Sometimes we have many files with the same subject, but the file names of these files are confused. For example, the file shown in Figure 4 is the performance of each employee in March, but the naming format is different. We should unify it into the format of "name + performance in March". To achieve this effect, you can rename files through the operations you learned earlier. Previously, we only introduced the operations on a single file. How can you batch operate multiple files at the same time?

After running the above code, you can see that all the original file names under the folder have been renamed, as shown in Figure 5.

The specific implementation code of merging monthly sales daily reports into one document is as follows.

Run the above code and you will get the merged file df_o. As shown in Figure 7.

As for the above data set, let's assume that we have obtained a document from January to June. In addition to the columns of "date" and "sales volume", this document also has a column of "month". What you need to do now is to split this file into multiple files according to the "month" column, and store each month as a separate file.

By running the above code, you can see multiple split files in the target path, as shown in Figure 8.