Specifically, in the process of down sampling, the size of the feature image is decreasing, which inevitably discards some information, which is usually the location information of the target in the image.

Why do you need to take samples? Because this is the requirement for the classification of objects in the image. For example, the typical image classification network VGG-16 shown in the figure below, after the full connection layer, becomes a vector of (1000,1), indicating the probability of belonging to each category. 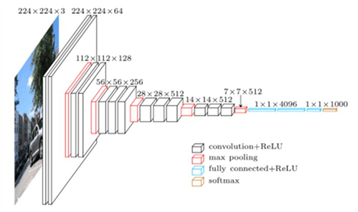 Based on the two contradictory problems of semantic segmentation, FCN proposes to use full convolution and jump structure.

There are various adjustments and improvements. 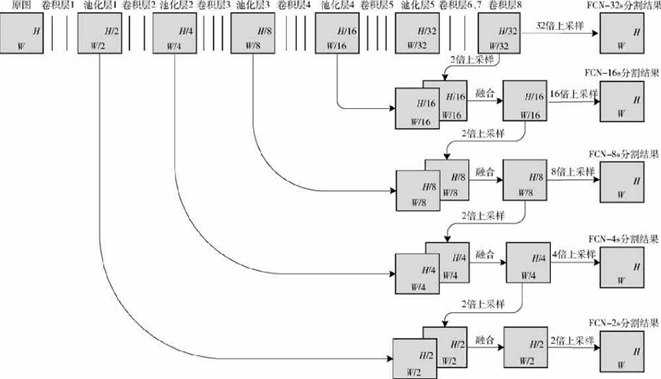 take FCN-16s as an example to briefly look at the code:

In many previous studies of this paper, it is believed that the spatial undeforming may be caused by the subsampling structure mentioned earlier, but the recent research finds that it is not, so the later papers will not mention the influence of this undeforming on the positioning accuracy of DCNN

As shown in figure a, there is a pair of original images, which should be classified pixel by pixel. Simply, the pixel category of each point is only related to itself, and figure b is obtained, which is obviously not enough. Let the pixel of each point be related to its four neighboring pixels to get figure c, but if the neighboring points fluctuate, then this degree of correlation is not enough. Let the pixels of each point be correlated with all other pixels. This correlation can be positive or negative. In this way, figure d, full connection conditional random field is obtained. It's also called Dense CRF.

The first half of it is a univariate function, where P(xi) is a probability value generated by the deep convolution neural network:

The second half of    represents the relationship between a pair of pixels, and the calculation formula is as follows:

u(xi,yj)u(x_i,y_j)u(xi, YJ) indicates the binding conduction direction, whether to enhance or weaken. For example, pixel 1 may be a person, pixel 2 may be a person, and pixel 3 may be a car, so 1 and 2 enhance each other, and 2 and 3 weaken each other. The latter weighted item is the typical score weight multiplied by the feature to calculate the intimacy between the two pixel points. The specific calculation process is as follows:

where ppp is the 2D position of the pixel, III is the 3D pixel value of the image, with three different variance symbols representing the variance of three Gaussian distributions; the second half is a smooth processing. It can be seen from this: the closer the pixel distance is, the closer the color is, the stronger the feature will be; and if the denominator, that is, the variance is large, the feature will be difficult to be strong; so this is a process of finding similar pixels in five-dimensional space and enhancing the feature.

It seems that DenseCRF is difficult to implement, but in fact, there are packages in python that pydensecrf can implement, and as a post-processing method, it does not participate in training.

This paper analyzes the above two problems and designs a model architecture, that is, full convolution neural network + empty convolution, front-end module + context module, as shown in the following figure: 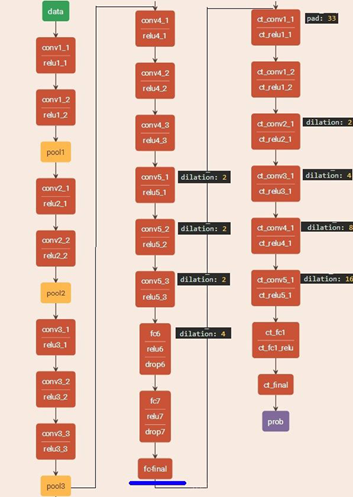 Compared with V1, DeepLabV2 has an additional hole convolution spatial pooling feature pyramid (ASPP), which pays more attention to the problem of multi-scale targets. ASPP further utilizes void convolution, and the module structure is as follows: 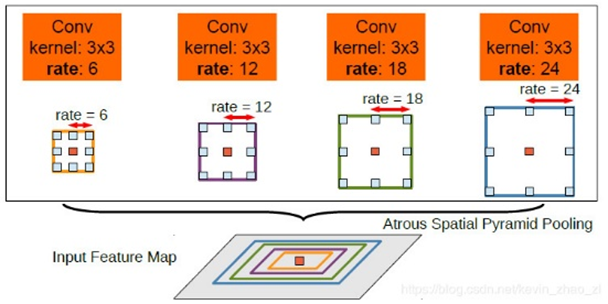 This module is used for multi-scale semantic aggregation in this paper. It discards the previous methods, such as scaling the input to multiple scales and then training, or linear aggregation of context module just mentioned. The module first performs parallel hole convolution of different sampling rates for the same input and then performs feature fusion. The hole rates used in this version of deepbab are 6, 12, 18, 24. In fact, the expansion convolution of void rate has a high demand for graphics card resources and a slow speed. Moreover, due to the emergence of ResNet, the paper uses the adjusted ResNet101 in the backbone network, which leads to the model more "heavy".

In addition to the loss of image details in the process of down sampling, two problems of void convolution are mentioned 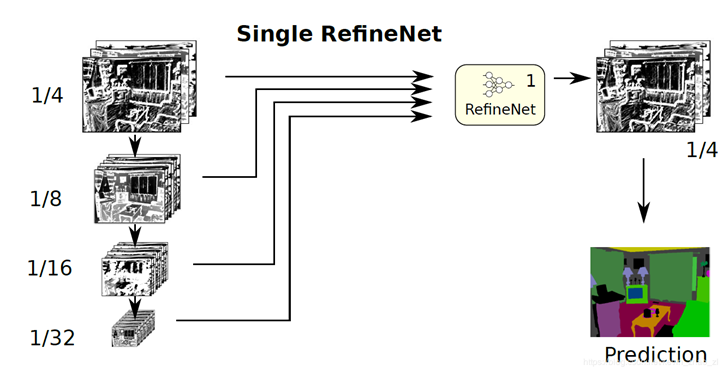 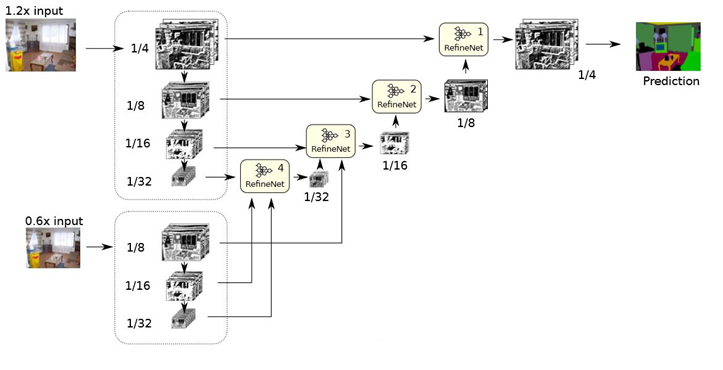 In essence, the original image has been zoomed to more scales, and this model is not easy to train. There is a RefineNet module in each of the four structures, as shown in the figure below: 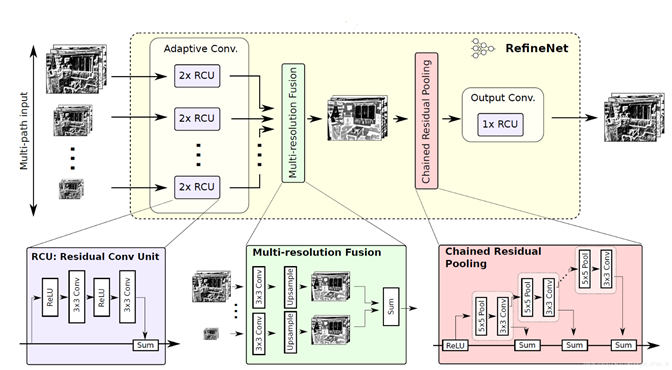 , RCU is a full convolution form of ResNet; multi resolution fusion is to process the same size of Solutions is mainly used to generate characteristic graphs with classification probability.

The     model uses ResNet with hole convolution as the backbone network to extract the feature map, which is 1 / 8 of the input image. After pyramidal pooling module to obtain semantic information, four different levels of pyramids are used and upper sampling is used to fuse them into the size of the original feature map. After a convolution layer, the predicted output is obtained.

. Subsequent experiments show that this method is conducive to fast convergence.

The architecture of   model is re established as follows:

. In this paper, the tedious post-processing is abandoned, so that the model can be trained and inferred end-to-end, and some column adjustments are made in the implementation details, including learning rate strategy, batch regularization layer, backbone network pooling and hole convolution 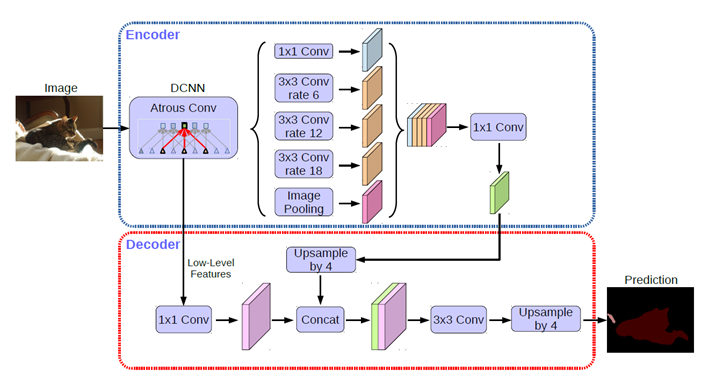 As you can see, a shallow feature is added to the decoder to increase the weight of position information.

A quick look at the code: