2.1 introduction to divide and conquer algorithm

1) Divide and conquer algorithm is a very important algorithm. The literal explanation is "divide and conquer", which is to divide a complex problem into two or more identical or similar subproblems, and then divide the subproblem into smaller subproblems ~ ~ ~ know that the final subproblem can be solved simply and directly, and the solution of the original problem is the combination of the solutions of the subproblems. This technique is the basis of many efficient algorithms, such as sorting algorithm (fast sorting, merge sorting), Fourier transform (fast Fourier transform)

2) Divide and conquer algorithm can solve some classical problems

Divide and conquer has three steps at each level of recursion

Knapsack problem: there is a knapsack with a capacity of 4 pounds, and now there are the following items

2) The items required to be loaded cannot be repeated

1) KMP is a classical algorithm to solve whether the pattern string has appeared in the text string, and if so, the earliest position. 2) Knuth Morris Pratt string search algorithm, referred to as "KMP algorithm", is often used to find the occurrence position of a pattern string P in a text string S. This algorithm is composed of Donald Knuth, Vaughan Pratt James H. Morris jointly published in 1977, so they named the algorithm after their surnames. 3) KMP algorithm uses the previously judged information to save the length of the longest common subsequence in the pattern string through a next array. During each backtracking, it finds the previously matched position through the next array, saving a lot of calculation time. 4) reference: Very detailed KMP algorithm (powerful) - ZzUuOo666 - blog Park

String matching problem: 1) there is a string str1 = "BBC abcdab abcdabde" and a substring str2="ABCDABD" 2) now it is necessary to judge whether str1 contains str2. If it exists, it will return the first occurrence position. If not, it will return - 1. 3) requirements: use KMP algorithm to complete the judgment, and simple violent matching algorithm cannot be used

For example, there is a string Str1 = "BBC abcdab abcdabde", judge whether it contains another string Str2 = "ABCDABD"?

This is the end of KMP algorithm thought analysis!

 greedy algorithm with high efficiency:
1) At present, there is no algorithm that can quickly calculate the prepared value. Using greedy algorithm, we can get a very close solution with high efficiency. In terms of policy, the minimum set covering all regions is required:
2) Traverse all radio stations and find a station that covers the most uncovered areas (this station may contain some covered areas, but it doesn't matter)
3) Add the radio station to a collection (such as ArrayList) and try to remove the areas covered by the radio station in the next comparison.
4) Repeat step 1 until all areas are covered 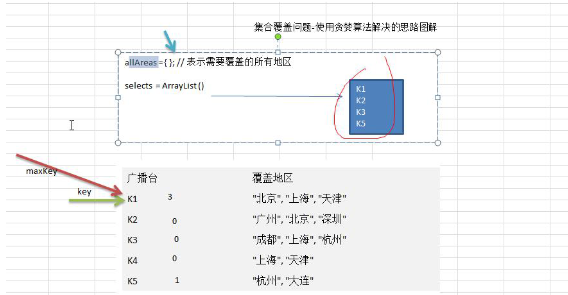 5.4 precautions and details of greedy algorithm

1) The results obtained by greedy algorithm are not necessarily the optimal results (sometimes the optimal solution), but they are relatively approximate (close) to the optimal solution
2) For example, the algorithm in the above question selects K1, K2, K3 and K5, which covers all regions
3) However, we find that K2, K3, K4 and K5 can also cover all regions. If the use cost of K2 is lower than K1, K1, K2, K3 and K5 in the above question meet the conditions, but they are not optimal