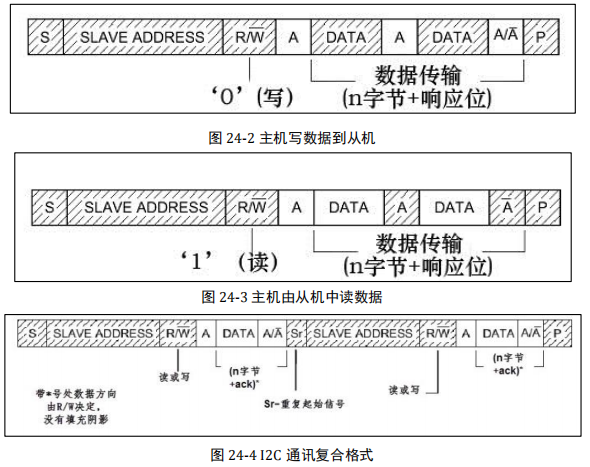 These figures show the data packet sequence of SDA line when master and slave communicate.
Where S represents the transmission start signal (S) generated by the I2C interface of the host. At this time, it is connected to all devices on the I2C bus
The slave will receive this signal.
After the start signal is generated, all slaves begin to wait for the slave address signal broadcast by the host next
(SLAVE_ADDRESS). On the I2C bus, the address of each device is unique. When the address broadcast by the host is different from
When the address of a device is the same, the device is selected, and the unselected device will ignore the subsequent data signal.
According to the I2C protocol, the slave address can be 7 bits or 10 bits.
After the address bit is the selection bit of the transmission direction. When this bit is 0, it indicates that the subsequent data transmission direction is determined by the master
The master transfers data to the slave, that is, the master writes data to the slave. When this bit is 1, it is the opposite, that is, the host reads data from the slave.
After the slave receives the matching address, the master or slave returns an ACK or NACK signal,
Only after receiving the response signal can the host continue to send or receive data.
(2) Start and stop signals of communication
Start (S) and stop signals are two special states, as shown in figure 24-5. When SCL line is high
At ordinary times, SDA line switches from high level to low level, which indicates the beginning of communication. SDA when SCL is high
The line switches from low level to high level, indicating the stop of communication. Start and stop signals are generally generated by the host.

(3) Data validity
I2C uses SDA signal line to transmit data and SCL signal line to synchronize data. See figure 24-6. SDA number
The data line transmits one bit of data in each clock cycle of SCL. Data represented by SDA when SCL is high during transmission
Valid, that is, SDA at this time indicates data "1" at high level and data "0" at low level. When SCL is low
At normal level, SDA data is invalid. Generally, SDA performs level switching at this time to prepare for the next presentation of data
Ready. 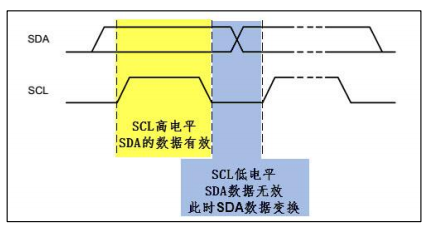 When reading the data direction, the host will release the control of SDA signal line, the slave will control SDA signal line, and the host will connect
When receiving signal and writing data direction, SDA is controlled by the host and receives signal from the slave.
(5) Respond
The data and address transmission of 2C is response. Responses include "ack" and "NACK"
Signal. As the data receiving end, when the device (regardless of the master and slave) receives a byte data or address transmitted by I2C,
If you want the other party to continue to send data, you need to send an "ack" signal to the other party, and the sender will continue to send the next message
One data; If the receiving end wants to end the data transmission, it sends a "non response (NACK)" signal to the other party, and the sender connects
After receiving this signal, a stop signal will be generated to end the signal transmission.

During transmission, the host generates a clock. At the 9th clock, the data transmitting end will release the control right of SDA and the data will be connected
The receiving terminal controls SDA. If SDA is at high level, it indicates non response signal (NACK), and low level indicates response signal (ACK).

2. What are software I2C and hardware I2C
If we directly control the two GPIO pins of STM32 to be used as SCL and SDA respectively, according to the above signal
Timing requirements: directly control the output of the pin like controlling the LED lamp (read the SDA level when receiving data)
I2C communication can be realized. Similarly, if we control the pin according to the requirements of USART, USART can also be turned on
News. So as long as you abide by the protocol, it is standard communication. No matter how you implement it, whether the controller produced by ST is still in use
It is a memory produced by ATMEL and can interact according to communication standards.

(3) Compile and generate hex files and burn them 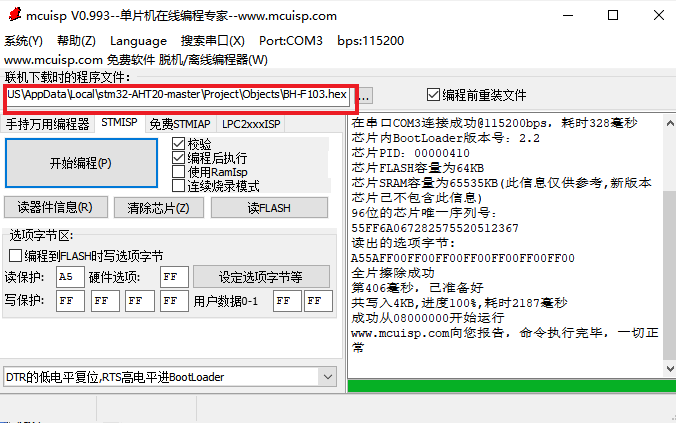 2, OLED display based on SPI bus

1. The SPI or IIC interface of STM32 displays the temperature and humidity of AHT20
(1) Download and display project code
OLED display code link

(3) Compile and generate hex files, burn and observe the results

3. Slide up and down or left and right to display long characters
(1) Open the font software to generate the font 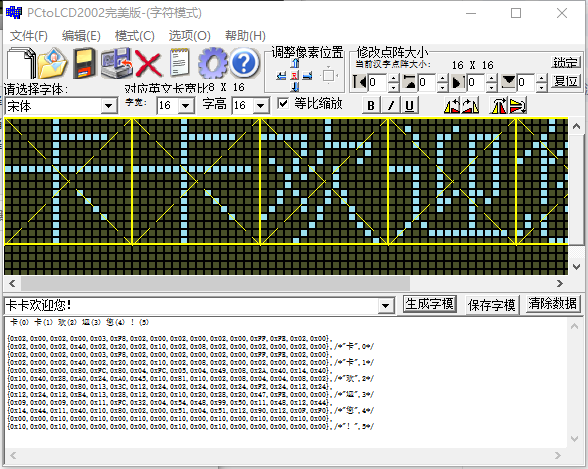 (3) Compile and burn, observe the results

Everything is difficult at the beginning. At the beginning, I still can't understand how to display characters on the OLED display screen. Later, I refer to several blogs of senior students, sisters and other bloggers to understand the process of a series of steps, analyze the realization of the code in the exploration process, and understand the coding and modulus principle of Chinese dot matrix font. In the step of completing OLED display, the problems of incomplete display of characters and non display of digital parts are gradually solved.