The following two examples are used to understand the problems caused by the characteristics of tcp transmission without data boundary, which leads to the concepts of packet combination and subcontracting proposed in this paper.

Use the client and server of swoole here.

Example 1: the sender sends multiple pieces of data and the receiver reads them at one time

The client has sent "hello!" 11 times, so what is the server receiving?

Different from the expectation, the server did not receive 11 times, and 11 "hello!" were stuck together!

Example 2: the sender sends a large amount of data, and the receiver reads it several times

The above client sends 32kb data once. How does the server receive it?

The server did not read once, but read five times!

Transmission type SOCK_STREAM represents a connection oriented socket (stream stream). It is figuratively likened to a "conveyor belt". TCP protocol is based on this streaming socket. 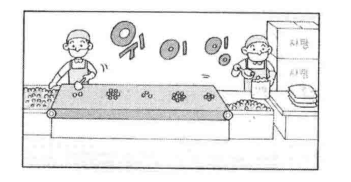 The above figure is from tcp/ip network programming

On the left side, data packets are placed on the conveyor belt one by one. On the right side, in order to improve efficiency, there is a buffer, which may be read once after the buffer is full or multiple times before it is full.

For the above example, there is no data boundary for tcp transmission

Two solutions are given in the swoole documentation. In these two schemes, the bottom layer of swoole will splice data packets to ensure that each callback can get a complete package ($data).
Processing method 1, EOF (end of file)
The complete data is confirmed by a specific separator (that is, the separator is used to define the boundary of the data.)

It can be seen that the problem in example 1 and example 2 at the beginning of the article has been solved.

Before data, save the length of data in a few bytes, and the receiver intercepts data according to the length.
For example, the packet body data='aaaaa ', the packet header uses 2 bytes to save the data length of 5.

The next focus is on how to define the header:

Finally, the examples in this paper are that the client sends messages to the server, and the information sent by the server to the client also needs to be subcontracted, and the code is the same.