Talking about distributed unique IDs, this article is very real

The globally unique id of a distributed system is a scenario encountered by all systems. It is often used in search and storage as a unique identification or sorting, such as the globally unique order number and coupon code of a coupon. If two identical order numbers appear, it will undoubtedly be a huge bug for users.

In a single system, there is no challenge to generate a unique ID, because there is only one machine and one application. You can directly use a single instance plus an atomic operation to increase itself. In the distributed system, different applications, different computer rooms and different machines need to work hard to generate unique IDs.

The core of distributed unique ID is uniqueness, and others are additional attributes. Generally speaking, an excellent global unique ID scheme has the following characteristics for reference only:

Friends who have written Java know that sometimes we use a class UUID to write logs, and a random ID will be generated as the unique identification code of the current user's request record. Just use the following code:

The usage is simple and crude. The full name of UUID is actually universal unique identifier, or GUID(Globally Unique IDentifier). It is essentially a 128 bit binary integer. Usually, we will express it as a string composed of 32 hexadecimal numbers, which will hardly be repeated. It is an extremely huge number to the 128 power of 2.

The following is the description of Baidu Encyclopedia:

UUID consists of a combination of the following parts:

(1) The first part of UUID is related to time. If you generate a UUID after a few seconds, the first part is different and the rest are the same.

The only drawback of UUID is that the resulting string will be long. The most commonly used standard for UUID is Microsoft's guid (global unique identifiers). In ColdFusion, you can use the CreateUUID() function to simply generate UUIDs in the format of XXXXXXXX - XXXX - xxxxxxxxxxxxxxxxxx (8-4-4-16), where each x is a hexadecimal number in the range of 0-9 or a-f. The standard UUID format is xxxxxxxx-xxxx-xxxx-xxxx-xxxxxxxxxxxx (8-4-4-4-12). You can download CreateGUID() UDF from cflib for conversion. [2]

uuid is so good. Is it a silver bullet? Of course, the disadvantages are also prominent:

Of course, some people want to improve this guy, such as unreadability transformation. Use uuid to int64 to convert it to long type:

Another example is to transform the disorder, such as NHibernate's Comb algorithm, which retains the first 20 characters of uuid and the time of generating the last 12 characters with guid. The time is roughly orderly, which is a small improvement.

Comments: UUID does not exist as a database index. As some logs, context recognition is still very popular, but it's really crashing if it is used as an order number

The disadvantages are also obvious:

Since the high concurrency and high availability of a single machine are uncertain, add machines and build a database in cluster mode. Since there are multiple master s in cluster mode, each machine must not generate its own id, which will lead to duplicate IDs.

At this time, it is particularly important to set the starting value and step size for each machine. For example, three machines V1, V2 and V3:

To set up the command line, you can use:

In this way, when there are enough masters, the high performance is guaranteed. Even if some machines are down, slave can be added. It can be based on master-slave replication, which can greatly reduce the pressure on a single machine. However, there are still disadvantages:

The above database access is too frequent. As soon as the concurrency increases, many small probability problems may occur. Why don't we directly take out a section of id at one time? Put it directly in the memory for use. When it is used up, you can apply for another period. Similarly, the advantages of the cluster mode can be retained. Take out a range of IDs from the database each time, such as three machines, and issue:

Of course, if you don't have multiple machines, you can apply for 10000 numbers at a time, implement it with optimistic lock, and add a version number,

Only when it is used up, it will re apply to the database. During the competition, optimistic lock can ensure that only one request is successful. Others can wait for others to take it out and put it in the application memory, and then take it. In fact, it is an update operation:

redis has an atomic command incr. The atom increases automatically. redis is fast and based on memory:

Of course, if there is a problem with a single redis, you can also go to the cluster. You can also use the initial value + step size and the INCRBY command. Several machines can basically resist high concurrency.

zookeeper can actually be used to generate unique ID s, but we don't need it because the performance is not high. znode has a data version and can generate a 32-bit or 64 bit serial number. This serial number is unique, but if the competition is large, it also needs to add distributed locks, which is not worth it and inefficient.

The following are official documents from meituan: https://tech.meituan.com/2019...

Leaf adheres to several requirements at the beginning of design:

It is very clear in the document. There are two versions: 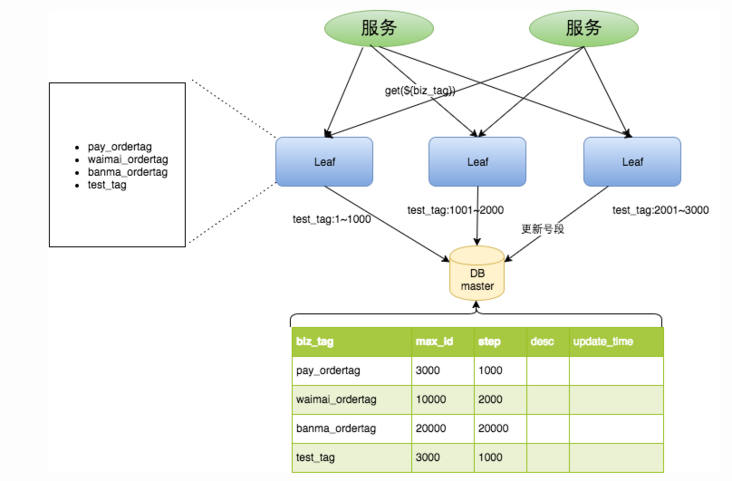 The disadvantage of this is that it takes a lot of time to update the number segment, and it is unavailable if it goes down or master-slave replication.

snowflake is an ID generation algorithm used in the internal distributed project of twitter. It is widely popular after open source. The ID generated by it is Long type, 8 bytes, 64 bits in total, from left to right:

If each machine generates an ID according to the above logic, the trend will increase, because time is increasing, and there is no need to build a distributed one, which is much simpler.

It can be seen that snowflake is strongly dependent on time. Theoretically, time is moving forward, so the number of digits in this part is also increasing. However, one problem is time callback, that is, time suddenly goes backward, which may be a fault or the time is taken out after restart. How can we solve the problem of time callback?

It is developed by Baidu. Based on the Snowflake algorithm, you can define the number of bits of each part by yourself. It has also made a lot of optimization and expansion: https://github.com/baidu/uid-...

UidGenerator is implemented in Java and is based on Snowflake Unique ID generator for the algorithm. UidGenerator works as a component in an application project. It supports custom workerId bits and initialization policies, which are applicable to docker Scenarios such as instance automatic restart and drift in virtualization environment. In terms of implementation, UidGenerator solves the natural concurrency limitation of sequence by borrowing the future time; RingBuffer is used to cache the generated UID, parallelize the production and consumption of UID, and supplement the CacheLine to avoid the hardware level "pseudo sharing" problem caused by RingBuffer. Finally, the single machine QPS can reach 6 million.

No matter what kind of uid generator, ensuring uniqueness is the core. Other performance or high availability issues can be considered on this core. The overall scheme is divided into two types:

No one is perfect. There are only solutions that meet the business and current volume. There is no optimal solution in the technical solution.

[about the author]:
Qin Huai, the official account of Qin Huai grocery store, is not in the right place for a long time. Personal writing direction: Java source code analysis, JDBC, Mybatis, Spring, redis, distributed, sword finger Offer, LeetCode, etc. I carefully write every article. I don't like the title party and fancy. I mostly write a series of articles. I can't guarantee that what I write is completely correct, but I guarantee that what I write has been practiced or searched for information. Please correct any omissions or mistakes.