In the process of developing applications, the ideal state is not to have errors. Even if errors occur, they should be detected during compilation. However, in reality, errors will occur from time to time when the program runs, which will not be expected. If ignored, it will lead to program crash.

In C language, the program will indicate the error by returning an abnormal value, and the programmer will detect and handle the possible exceptions by using operations such as if else, which will make the code very cumbersome and bloated. Java provides an error capture mechanism for exception handling, handles exceptions in programs, reduces error checking, and provides reliable applications.

Suppose an error occurs while a Java program is running. This error may be caused by the error information contained in the file, or there is a problem with the network connection. It may also be caused by using an invalid array subscript, or trying to use an object reference that is not assigned a value. 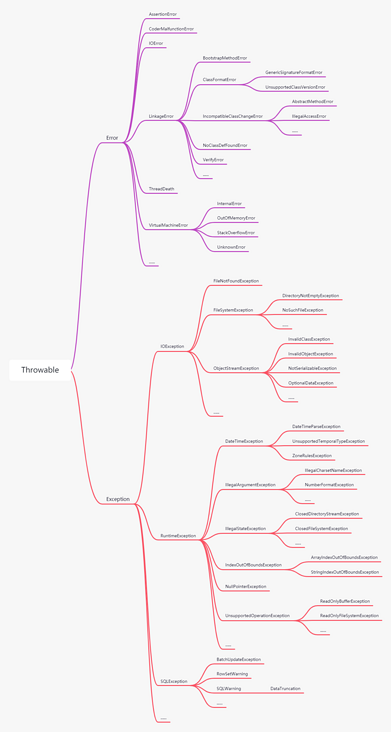 checked exception and run-time exception are both branches of the Exception class hierarchy.

The principle for using exceptions is that if the caller is expected to recover appropriately, the checked exception should be used for this situation.

Note: the difference between Exception and Error: Exception can be handled by the program itself, but Error cannot be handled.

If you don't want to handle exceptions in a method, you can use the throws keyword to declare the exceptions to be thrown in the method. Examples are as follows:

When reading the file content, no matter whether the file does not exist or the content is empty, IOException exception will be thrown out.

Not all cases need to use throws to declare the exception to be thrown. Remember that exceptions should be thrown in the following four cases:

When declaring exceptions, do not declare Error and its subclass errors in Java, nor do you need to declare which non checked exceptions inherited from RuntimeException.

These runtime exceptions are completely under control.

The above only introduces the declaration of exceptions, but how do exceptions occur? An example is given below:

From the above example, we can see that the declaration exception is generated because an exception is thrown using the throw keyword, indicating that the file is not found. The expression of throw new FileNotFoundException() thrown above can also be changed to the following expression:

Once a method throws an exception, it is impossible for the method to return to the caller. That is, you don't have to worry about the returned default value or error code.

An example of reading data is given below:

As shown above, when the in.read() method throws an IOException, it will jump out of the while loop, enter the catch clause, and generate a stack trace.

When multiple exceptions are thrown in the try statement block, you need to use the catch clause to deal with different types of exceptions. Catch clauses are executed sequentially, and only one is executed. An example is given below:

You can also replace multiple exceptions handled by the catch clause above with the base class Exception of the Exception type. As follows:

When an exception is caught, do not ignore it through an empty catch clause. As follows:

After ignoring exceptions, the program will quietly execute in case of errors, rather than prompt errors. It may bury hidden dangers in future procedures. It is best to handle exceptions correctly, avoid failures, or throw exceptions, resulting in failure of programs, thereby retaining useful information for debugging later.

Most standard exceptions have constructors that support chains. For exceptions without a support chain, you can use the Throwable initCause(Throwable cause) method to set cause. The exception chain not only allows you to access the cause through the program, but also integrates the stack trace of the cause into higher-level exceptions.

You can use the printStackTrace() method provided by the Throwable class to access the information of the stack trace.

You can also get a StackTraceElement array object describing the stack track through the getStackTrace() method. As follows:

The output results are as follows:

The execution order of the try catch finally statement block is as follows: 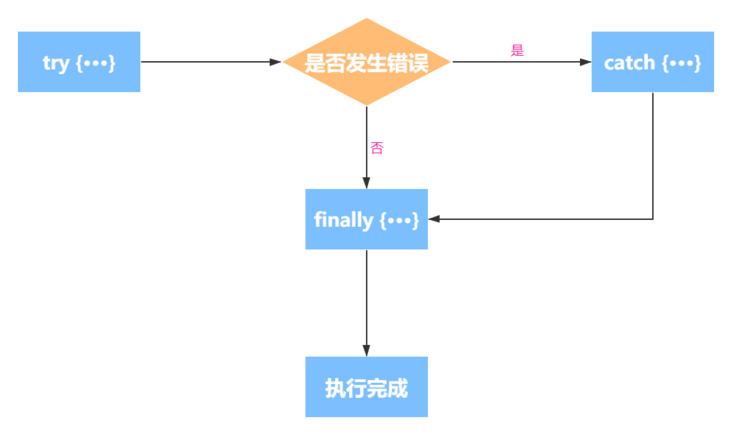 An example of try catch finally is given below:

The above example uses the try finally statement block to close resources. Put the resources to be closed in the finally clause to ensure that the resources are closed. However, this syntax will be too cumbersome, but this situation has been improved in Java SE 7.

Java SE 7 introduces the try with resources syntax to close resources. Using this syntax, you need to implement the java.lang.autoclosable interface:

If you write a class that represents resources that must be closed, you also need to implement the autoclosable interface.

The following is to use the try with resources syntax to simplify the above code: 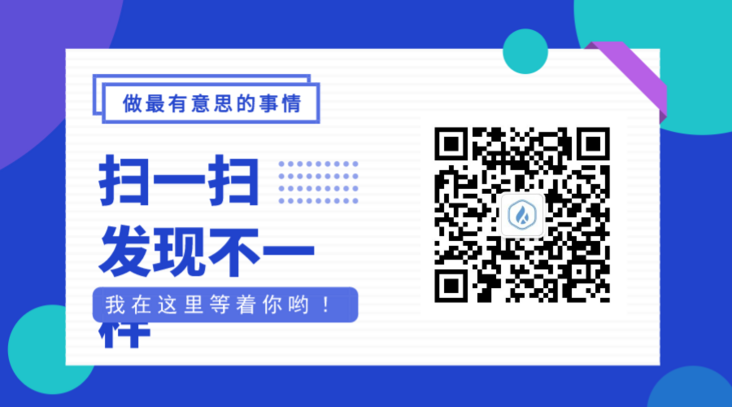