Previous review: Talk about HashMap 01 of jdk1.8
Last time we finished the put method, there was a way I did not elaborate, that is resize() method, which I personally think is the most beautiful but the most difficult part of HashMap. Next we will explain it slowly.

The resize() method is used for capacity expansion and initialization.

In this method, we should pay attention to old / newcap (old / new array length) and old / newthr (old / new capacity),

Look at the code. Part of the analysis has been written in the comments:

In jdk1.7, each node must first calculate a perturbation function and then recalculate the subscript. In 1.8, this is the way

If there is no hash conflict, that is, a Node does not have a next Node, it will directly take the remainder with the new array length to obtain the subscript. If there is a hash conflict, it will start a cycle: first define four Node type variables:
loHead, loTail, hiHead, hitail (actually the abbreviation of low and high), then traverse the linked list, and sum the hash value of the key of each node with the length of the old array (assuming the nth power of 2). The purpose is to get whether the number of the nth bit is 0. If it is 0, put the node into the linked list with loHead as the head and loTail as the tail. Otherwise, put it into the linked list with hiHead as the head, A linked list with hiHead as the tail. The process is as follows:

Finally, put the low linked list in the original position and the high linked list in the original position + the length of the old array. Assuming that the length of the Node array is 16, now traverse to oldTable[2], and find that there is a hash conflict in table[2], with Node1 < 1, a >, Node2 < 2, b >, Node3 < 3, C >. After the above operations, the low linked list has Node2 and Node3, while the high linked list has Node1, so the new array is put in this way, Put Node2 in the place of newTable[2] (the next Node is Node3), and Node1 in the place of newTable[2+16]. End.

Draw a picture to deepen your understanding

After the above calculation 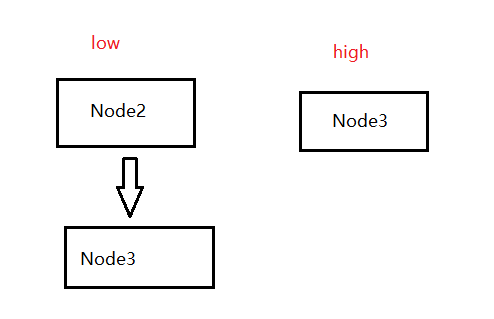 In fact, HashMap embodies the idea of lazy loading. After we call the construction method, the table in the member variable has not been assigned, that is, at this time, table=null. It will not be initialized until the put method is executed for the first time.