To facilitate user review and prepare for merge, you need to design an algorithm to count the differences between two submissions (branches). Before thinking about the specific flow of the algorithm, you need to summarize the types of differences.

If there are two commit commits, Parent, let's assume we consider the differences between Commits and Parents. That is, Commit is my submission and Parent is someone else's submission. Now you need to consider how my submission differs from others'submissions.

Special cases in the three-way difference.

There are two different algorithms for generating submissions:

Neither the two-way nor the three-way differences tell whether the user renamed the file or directory, because in name-based location isomorphism, renaming is equivalent to adding after deletion. This will be handled in post-processing.

Merging is an important means of combining multiple submissions (branches). A merged object is a merge of two submissions, but is generally considered a merge of branches because branches are required as a submission pointer. The nature of branch merging in the graph is that the degree equals two, that is, the generation of a submission is generated by two parent submissions and can carry incremental content.

Conflict resolution is the most important issue when merging two submissions (branches). Conflict judgments are actually similar to difference judgments, all made with the help of location homogeneity, and are not described here. The key issue here is how to determine and resolve conflicts. Conflicts are sensitive to users, who need to choose which content to put in a new version by comparing it. Conflicts can also be user-defined, and all non-identical content can be conflicts.

There are two solutions: the first is two-way merger, the second is three-way merge.

Two-way merge is very simple, only the same content is retained, deletion, addition and modification are all left to the user's choice. Because it is entirely impossible to decide whether to keep or discard the non-identical contents of the two paths. This is easy to do, but cumbersome for users, but it's very safe because the conflicting choices are entirely left to the users and can be completely user-defined.

The three-way merge has some autonomy. It introduces Base, the common ancestor of the two branches, and then uses Base to decide whether to keep the content or leave it to the user. This improves efficiency, but is not necessarily insured, because conflicts between algorithm definitions may not be user-defined.

The merged participants consist of three branches, Base, Head, Remote. Our goal is to merge Head and Remote, and Base is their common ancestor.

After the introduction of Base, all the differences have criteria to judge. The algorithm considers that changes (including additions and deletions) that do not cross between the two branches relative to their ancestors are preserved, while cross-changes are conflicting. Such a conflict definition actually fits most situations and further narrows the potential scope of conflict, so to speak, a balance has been found between efficiency and user needs.

We use tables to represent the possible occurrence of three branches in a merge. Assuming that the content of the isomorphic portion of each branch is capitalized, the following merge results can be obtained:

From the table above, we can directly show how the merging of isomorphic locations is handled. So the three-way merge algorithm also appears naturally: apply the previous isomorphic recursion, and then implement the judgment in the table.

Function recursion and invocation flow as shown in Fig. 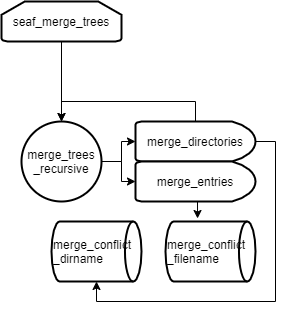 The content is to implement the three-way merge algorithm (the two-way merge is not implemented, only callback functions will be called).

Finally, you need to clarify the storage of the merged results. For merged results, there are two options:If do_merge=true, writes directly to the hard disk and returns a root directory id to merged_tree_root; Conversely, only callback functions are called.

No more detailed source code will be pasted here as follows: merge-new.c.