In the spring cloud architecture, the communication between microservices is based on Feign calls. In the actual use of Feign, we will probably face the following problems:

Let's discuss these issues together in this article. I hope it will be helpful to you after reading it.

First, let's take a look at how Feign's calling method is chosen?

How to select the calling method of Feign?

The advantages of this are: simple and convenient. The consumer can directly use the Feign interface provided by the producer.

The disadvantages of this are also obvious: the interface obtained by the consumer is the list of interfaces provided by the producer to all services. When a producer has many interfaces, it will be very chaotic; Moreover, the class is also on the production side. When calling, the consumer must scan the path of feign through @ SpringBootApplication(scanBasePackages = {"com.javadaily.feign"}) because the package path may be different from that of the producer. When the consumer needs to introduce many producer feign, it needs to scan many interface paths.

This calling method is described in detail in the previous two articles. Those interested can go directly through the following link:

Declare Feign client on the consumer side 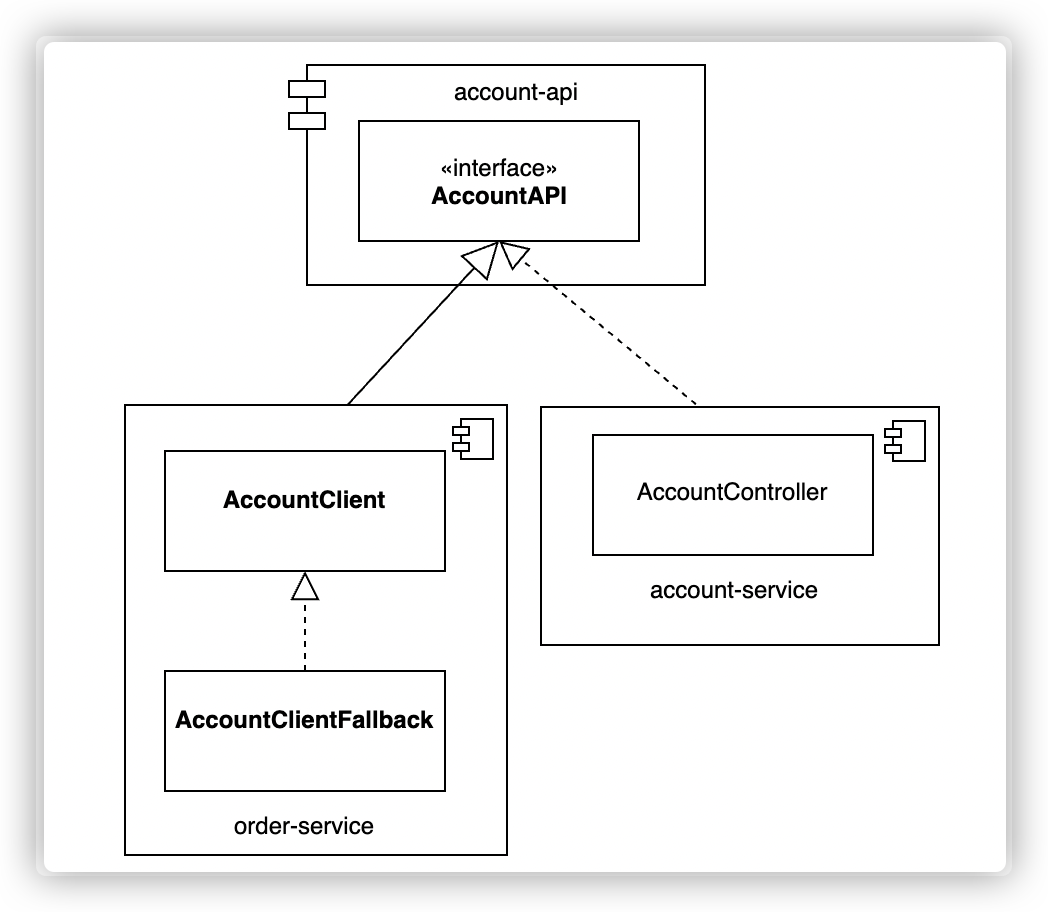 A public API interface layer is also required. Both the production side and the consumer side need to introduce this jar package. At the same time, Feign client and fuse classes are written on the consumer side as needed.

The advantages of this are: the client can write its own interfaces on demand, and all interfaces are controlled by the consumer; There is no need to add additional scan annotation scanBasePackages on the startup class.

The disadvantages of this are: the consumer side code is redundant, and each consumer needs to write Feign client; The coupling between services is tight, and one interface and three interfaces need to be modified.

So the question comes: since there are two calling methods, which one is more reasonable?

What I suggest here is to give priority to the second method, and customize the Feign client by the client itself.

In terms of responsibilities, only the consumer can clearly know which service provider to call and which interfaces to call. If @ FeignClient is directly written on the API of the service provider, it will be difficult for the consumer to customize it on demand, and the fuse processing logic should also be customized by the consumer. Although it will lead to code redundancy, the responsibilities are clear, and the problem that the interface path cannot be scanned can be avoided.

Of course, this is just a personal suggestion. If you think what I said is wrong, you can follow your own ideas.

Next, let's take a look at whether the Feign interface should be encapsulated.

Should Feign interface be packaged?

In the front end and back end separation project, when the back end returns interface data to the front end, the return format is generally unified. At this time, our Controller will write as follows:

The interface definition of feign needs to be consistent with the implementation class. Now, when order service obtains the order details, it also needs to return the user information. At this time, we call the getByCode() interface of account service through feign, and it will be written as follows:

Here, we need to get the ResultData wrapper class first, and then solve the returned result into a specific AccountDTO object through judgment. Obviously, this code has two problems:

If there are many such interface calls, then

Of course, we need to optimize such ugly code, and the optimization goal is also very clear: when we call Feign, we can directly obtain the entity object without additional disassembly. When the front end is called directly through the gateway, it returns a unified wrapper.

Here, we can implement it with the help of ResponseBodyAdvice. By enhancing the Controller return body, if it is recognized that it is a Feign call, we will directly return the object, otherwise we will add a unified packaging structure.

As for why the front and back ends need to unify the return format and how to implement it, in my old bird series articles How does SpringBoot unify the back-end return format? That's how old birds play! There is a detailed description, and those who are interested can move forward.

Now the question is: how to identify whether it is Feign's call or gateway's direct call?

There are two methods, one based on custom annotation and the other based on Feign interceptor.

Implementation based on custom annotation

Customize an annotation, such as Inner, and label Feign's interface with this annotation, so that it can be used for matching when using ResponseBodyAdvice.

However, this method has a disadvantage that the front end and feign cannot be shared. For example, an interface user/get/{id} can be called either through feign or directly through the gateway. Using this method, two interfaces with different paths need to be written.

Implementation of Interceptor Based on Feign

For feign calls, a special identifier is added to the feign interceptor. When converting an object, if it is found that it is a feign call, it will directly return the object.

Here we use the second method (the first method is also very simple, you can try it yourself)

If it is a Feign request, it will not be converted, otherwise it will be wrapped through ResultData.

There is no need to return package ResultData on the interface, and automatic enhancement is realized through ResponseBodyAdvice.

After the above four steps, our optimization goal is achieved under normal circumstances. The entity object is returned directly through Feign call, and the unified wrapper is returned through gateway call. It looks perfect, but it's actually bad, which leads to the third problem, how does Feign handle exceptions?

When the user name is "javadaily", a business exception BizException is thrown directly.

When calling the getByCode() method, "javadaily" is passed to trigger the producer's business exception rule.

Feign could not catch exception

When we call the selectByNo() method, we will find that the caller cannot catch exceptions, and all accountdtos are set to null, as follows:

It can be seen from the log that Feign actually obtained the unified object ResultData converted by the global exception handler, and the response code is 200. The response is normal. The consumer accepts that the object is AccountDTO, and the attribute cannot be converted. All of them are treated as NULL values.

Obviously, this is not in line with our normal business logic. We should directly return the exceptions thrown by the producer. How to deal with it?

Very simply, we only need to set a non-200 response code for the business exception in the global exception interceptor, such as:

In this way, consumers can normally catch business exceptions thrown by producers, as shown in the following figure:

The reason is that feign's exception resolution is triggered when the feign call result is a response code other than 200. Feign's exception parser will wrap it as FeignException, that is, wrap it again on the basis of our business exception.

You can mark a breakpoint on feign.codec.ErrorDecoder#decode() method to observe the execution result, as follows: 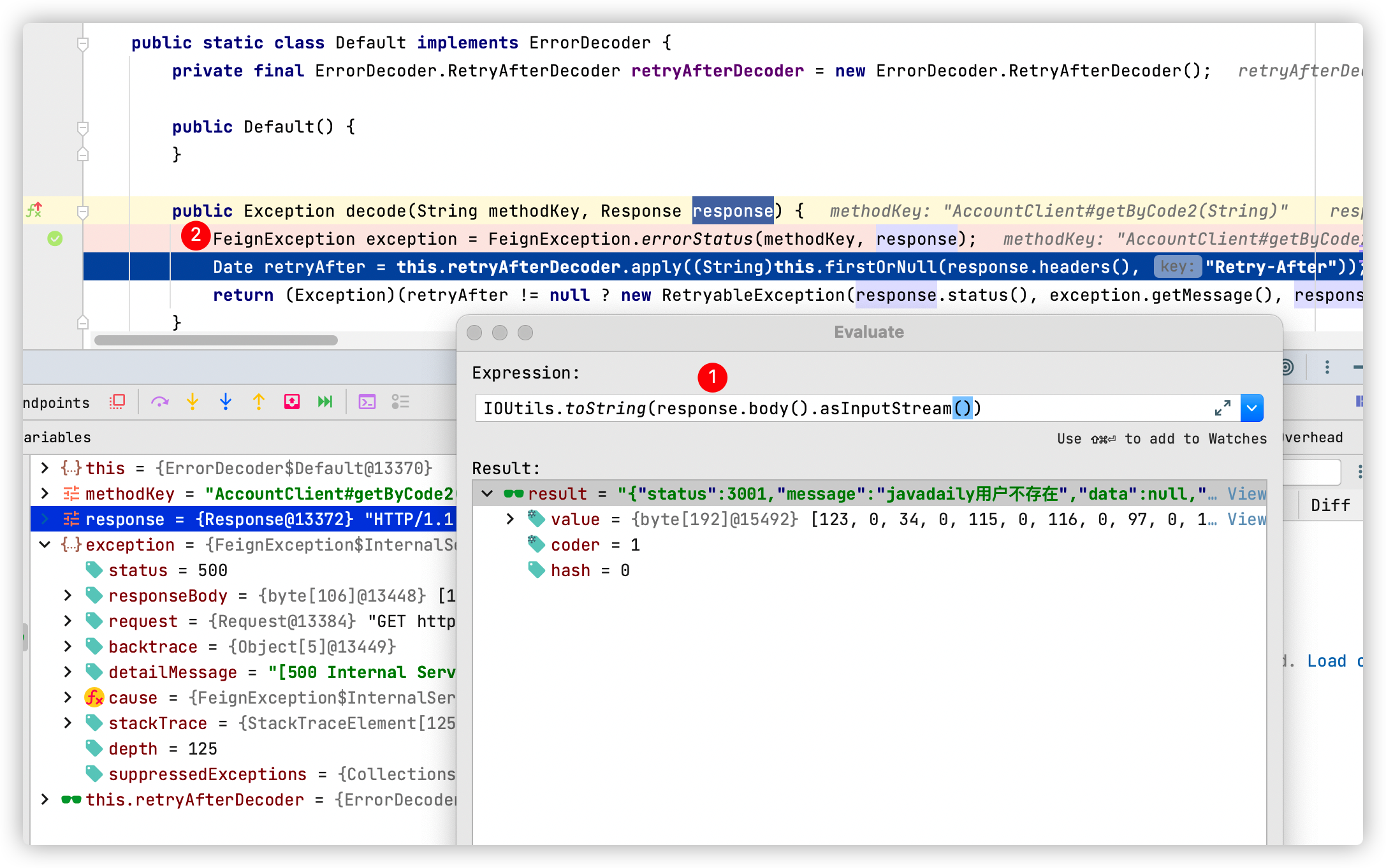 Obviously, we don't need this wrapped exception. We should directly throw the captured producer's business exception to the front end. How can we solve it?

Very simply, we just need to rewrite Feign's exception parser, re implement the decode logic, return the normal BizException, and then the global exception interceptor will catch BizException again! (it feels like an infinite doll)

At this time, Feign's exception decoder is customized to directly throw the producer's business exception information to complete the goal.

This paper makes a small summary of the problems Feign will encounter in the use process, and also puts forward some solutions that may not be mature. Of course, due to my limited level, the proposed solution is not necessarily the best. If you have a better solution, please leave a message and tell me. Thank you!