For the SpringCloud microservice architecture, each SpringBoot project is a service. Each service exposes the REST interface and calls each other through the HTTP protocol.

Using HTTP as the information transmission protocol between microservices will face the following problems:

RSocket protocol is a new communication protocol developed by Facebook, Netifi, Privota and other companies. It adopts binary point-to-point data transmission and is mainly used in distributed architecture. It is a new network communication layer 7 (application layer) protocol based on Reactive Streams. 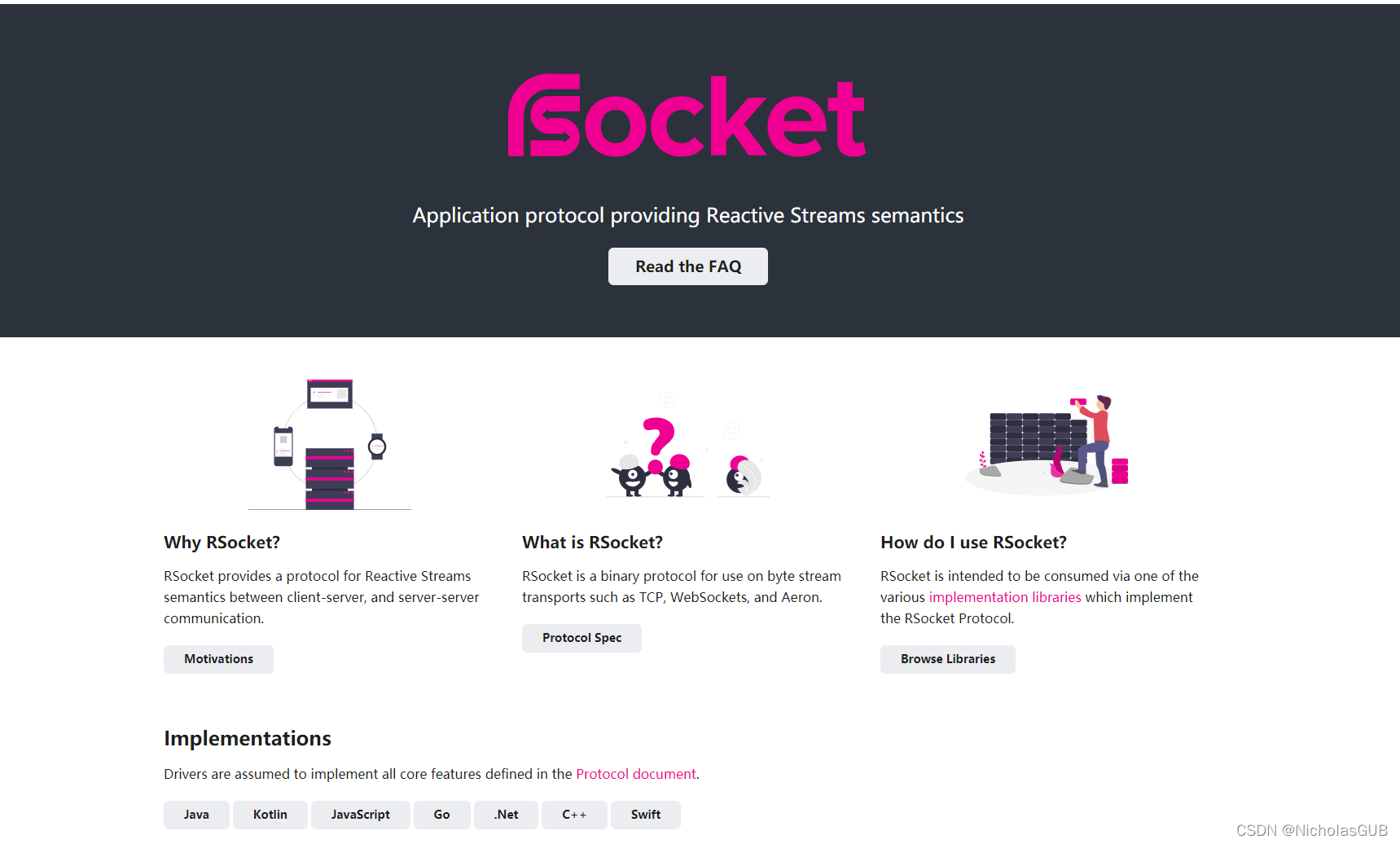 In the HTTP/2.0 protocol, the key problem is to solve the problem of TCP connection multiplexing, but in the HTTP protocol, all data is transmitted in the form of text, so there will be problems of excessive data transmission and limited transmission structure in the actual development, and RSocket is a binary protocol, which can easily transmit all kinds of data without data Due to the limitation of format, users can also compress according to their own needs.
In RSocket, the message body is divided into two parts: data and metadata, which can ensure that a small amount of metadata can still be exposed to other services under high-speed data transmission.

In the distributed project development environment, if the data produced by the producer is too fast, it will lead to the failure of consumers to process it in time. In the end, there may be an increase in the occupation rate of memory and CPU, resulting in the non response of the server or client. If there is no good implementation control, the whole application may be caused by the avalanche problem In order to avoid this situation, a set of flow control mechanism is needed to coordinate the processing speed between producers and consumers.

The core principle of the "SocketResumption" recovery mechanism provided in RSocket is that after the network Connection is re established, the user request is not processed from the beginning. The client and server need to be able to automatically save the Stream state on the Connection for a period of time after the Connection is interrupted. After the Connection is restored, the client will send this state information to the server, The server side will make grey judgment. If the recovery is successful, continue the previous Stream operation.

The RSocket protocol adopts the form of asynchronous message transmission when transmitting data. The transmitted content is Frame (application layer Frame, such as FrameHeader, RESUME, etc.). At the same time, the RSocket transmission does not contain a clear target access path like HTTP protocol, and all access is realized by the routing module.
RSocket protocol uses frames to speed up data transmission. Each frame may be request content, response content or protocol related data information, and an application message may be divided into multiple different segments to be saved in one frame (packet sticking and unpacking in TCP).

RSocket protocol is an application layer connection oriented protocol and does not depend on the transport layer protocol. Therefore, users can freely choose different application scenarios. For example, TCP can be used for data center construction, WebSocket can be used for asynchronous browser interaction, and HTTP/2.0 can be used for HTTP services.

Create the springboot project rsocket base and import dependencies:

Since SpringBoot container management is not introduced, you need to manually start and close the service and create an exclusive tool class.