One of the functions in my front-end and back-end separated lab management project is student status statistics.My design is to calculate the proportion of each state by day.For ease of calculation, at 0 o'clock a day, the system needs to reset the student's status and insert a piece of data as the start of the day.In addition, considering the students'demand for leave, the application for leave is usually done well in advance. When the system time reaches the actual time for leave, the system will modify the status of students to take leave.

Obviously, both of these sub-requirements can be achieved through timed tasks.After a little search on the web, I chose Quartz, the more popular timed task framework.

Quartz is a framework for timed tasks and other descriptions are available online.Here's a look at some of the very core interfaces in Quartz.

Scheduler is translated into a dispatcher through which Quartz registers, pauses, and deletes Trigger s and JobDetail s.Scheduler also has a SchedulerContext, which, as its name implies, is a context through which we can get some information about triggers and tasks.

Triggers can be translated into triggers that specify the cycle of task execution through cron expressions or classes such as SimpleScheduleBuilder.When the system time reaches the time specified by the Trigger, the Trigger triggers the execution of the task.

Job interfaces are tasks that really need to be performed.The JobDetail interface is equivalent to wrapping the Job interface, which Trigger and Scheduler actually use.

SpringBoot officially wrote spring-boot-starter-quartz.Students who have used SpringBoot know this is an officially provided starter, with which integration can be greatly simplified.

Now let's take a look at the official SpingBoot 2.2.6 document, where Quartz Scheduler talks about Quartz in subsection 4.20, but unfortunately there are only two pages to go. Let's first look at what you can learn from such a great document.

Here is the sample code given in the document. I just wrote it exactly, but I got null.I don't know if I'm using it in the wrong way.When you think about it later, the document should mean that after you create a Job object, you invoke the set method to inject the dependency into it.Later, however, we generated Job objects through frame reflection, which is more complicated.Finally, you decide to annotate the Job class with @Component.

Other sections of the document cover some configurations, but they are not comprehensive enough to help.Detailed configuration can refer to w3school's Quartz Configuration.

I chose to keep the information of the timer task in the database. The advantage is obvious. The timer task will not be lost because of the system crash.

After creating the table, you can see that there are 11 more tables in the database.We don't need to worry about the specific role of each table at all. The Quartz framework operates on these tables when adding delete tasks, triggers, and so on.

Configure quartz in application.yml.The role of the associated configuration is already noted in the note.

The first sub-requirement mentioned in Section 1 is a periodic task that is executed at 0 o'clock per day, and the content of the task is determined, so it's OK to register the bean s of JobDetail and Trigger directly in the code.Of course, these JobDetails and Triggers will also be persisted to the database.

The builder class creates a JobDetail and a Trigger and registers them as Spring bean s.From the official documents excerpted from section 3, we already know that these beans are automatically associated with the scheduler.It is important to note that JobDetail and Trigger need to set up group names and their own names to be used as unique identifiers.Of course, the unique identities of JobDetail and Trigger can be the same because they are different classes.

Trigger specifies the cycle of task execution through a Cron expression.Students who are not familiar with cron expression can learn it in Baidu.

There is a StartOfDayJob class in JobDetail, which is an implementation class of Job interface. It defines the specific content of the task. Take a look at the code:

Many blogs on the Internet are also described in this way.However, based on my actual tests, this allows Dependent Injection to be written, but I still don't know how it works. 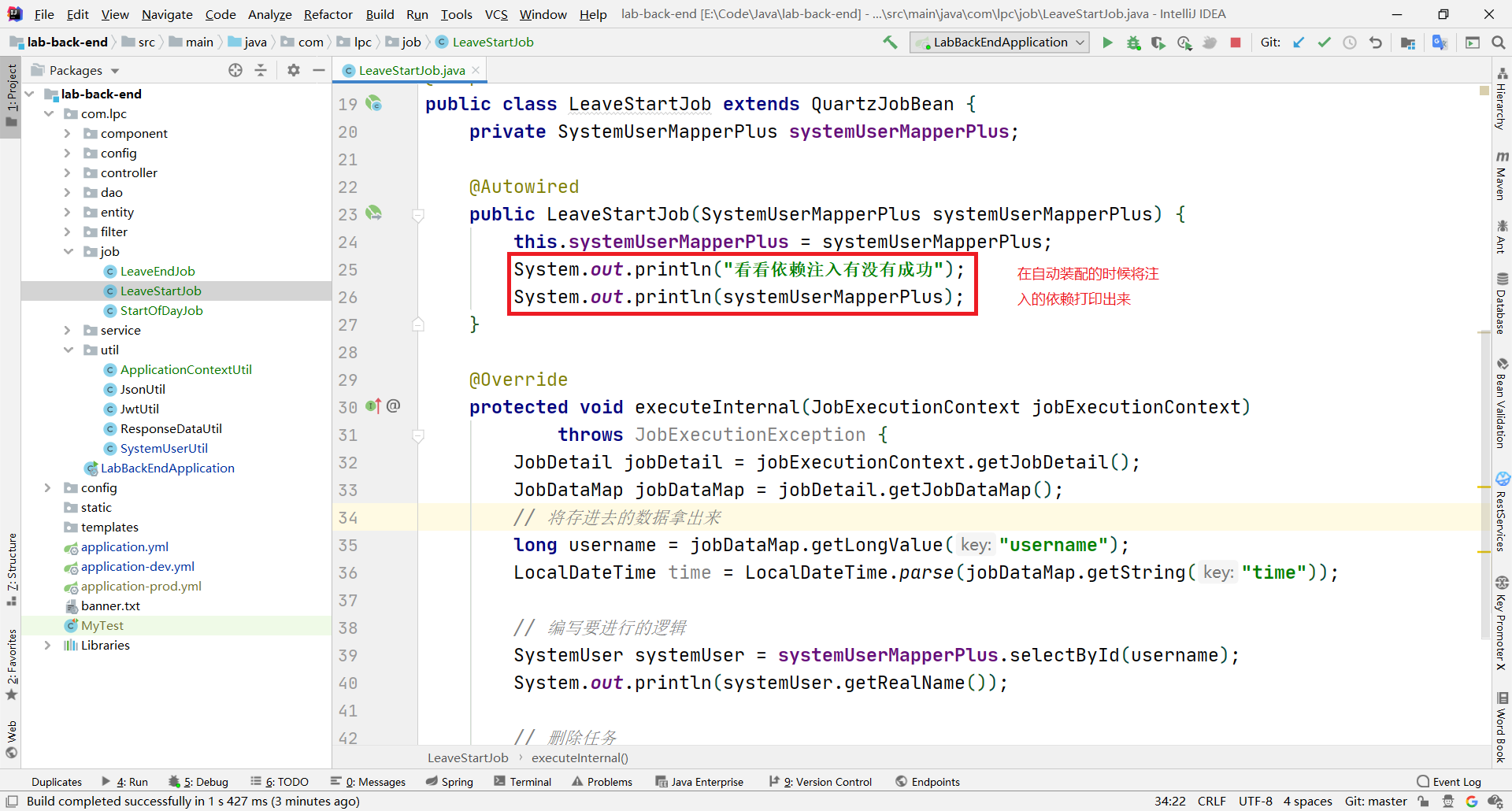 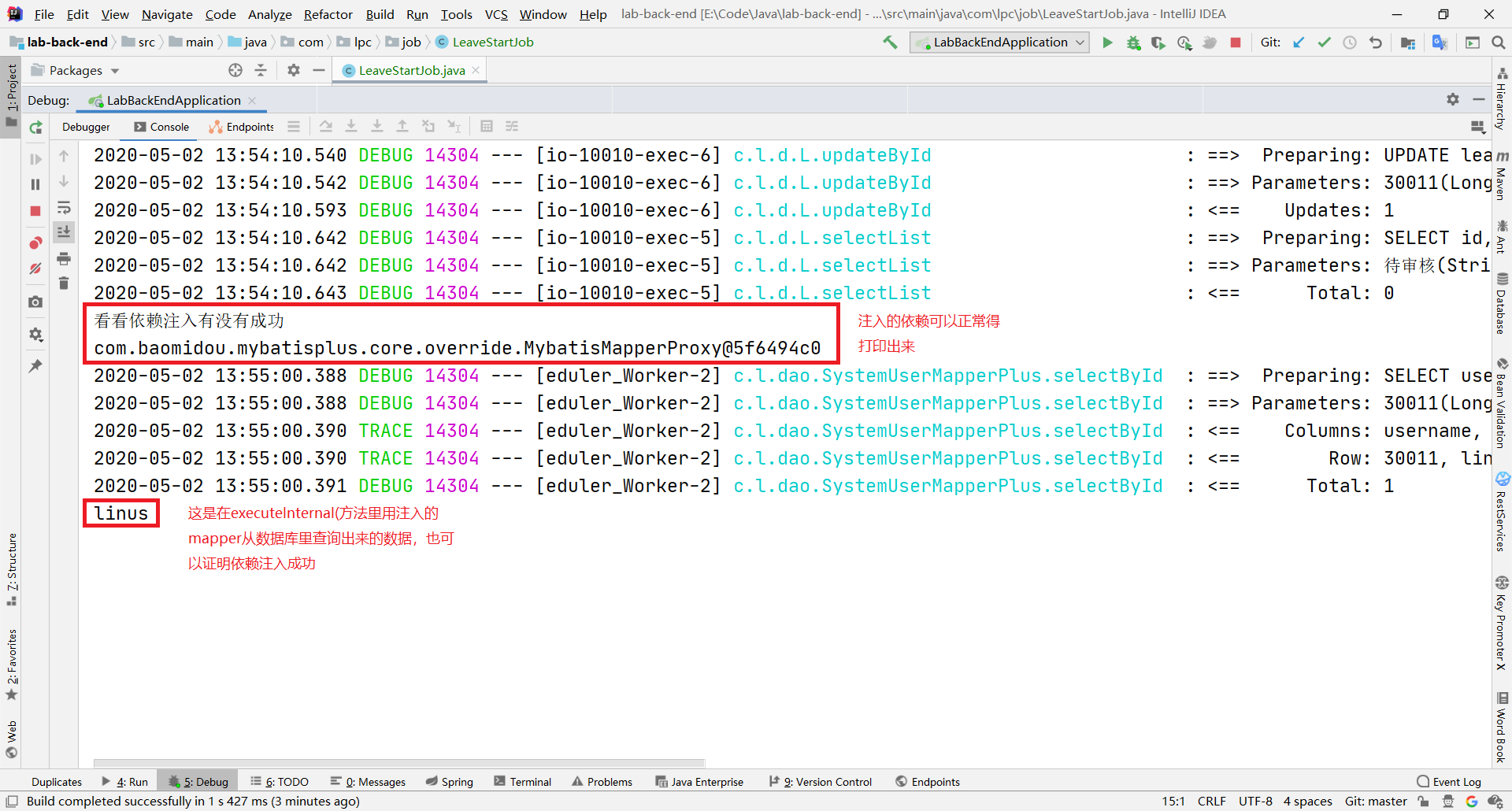 The second sub-requirement mentioned in Section 1 is that students take time off, which is obviously irregular, one-off and not cyclical.

Section 4.5 is roughly the same as Section 4.4, but there are two differences:

Business logic is to add Trigger and JobDetail to the scheduler when a teacher approves a student's leave request.

The Service-tier logic, which is important, is described in the notes.

Job class logic, important points are explained in the notes.

The above should meet the needs of most timed tasks.After checking the blogs on the Internet, I found that most of the blogs described in Quartz use or stay in Spring phase, and the configuration is also through xml, so after I implemented the function, I summarized the whole process, leaving it for people who need it and for their own reference in the future.

Overall, Quartz is still very convenient to implement timed tasks, and after integration with SpringBoot, configuration is very simple, which is a good choice for achieving timed tasks.

When using SpringBoot and Quartz in IDEA 2020.1, no org.quartz package can be found for error, but depending on the org.quartz package, import in the class has no error, and you can also jump directly to the corresponding class by Ctrl+left mouse button.I used IDEA 2019.3.4 later and no longer had this error.That's the new version of IDEA's BUG. 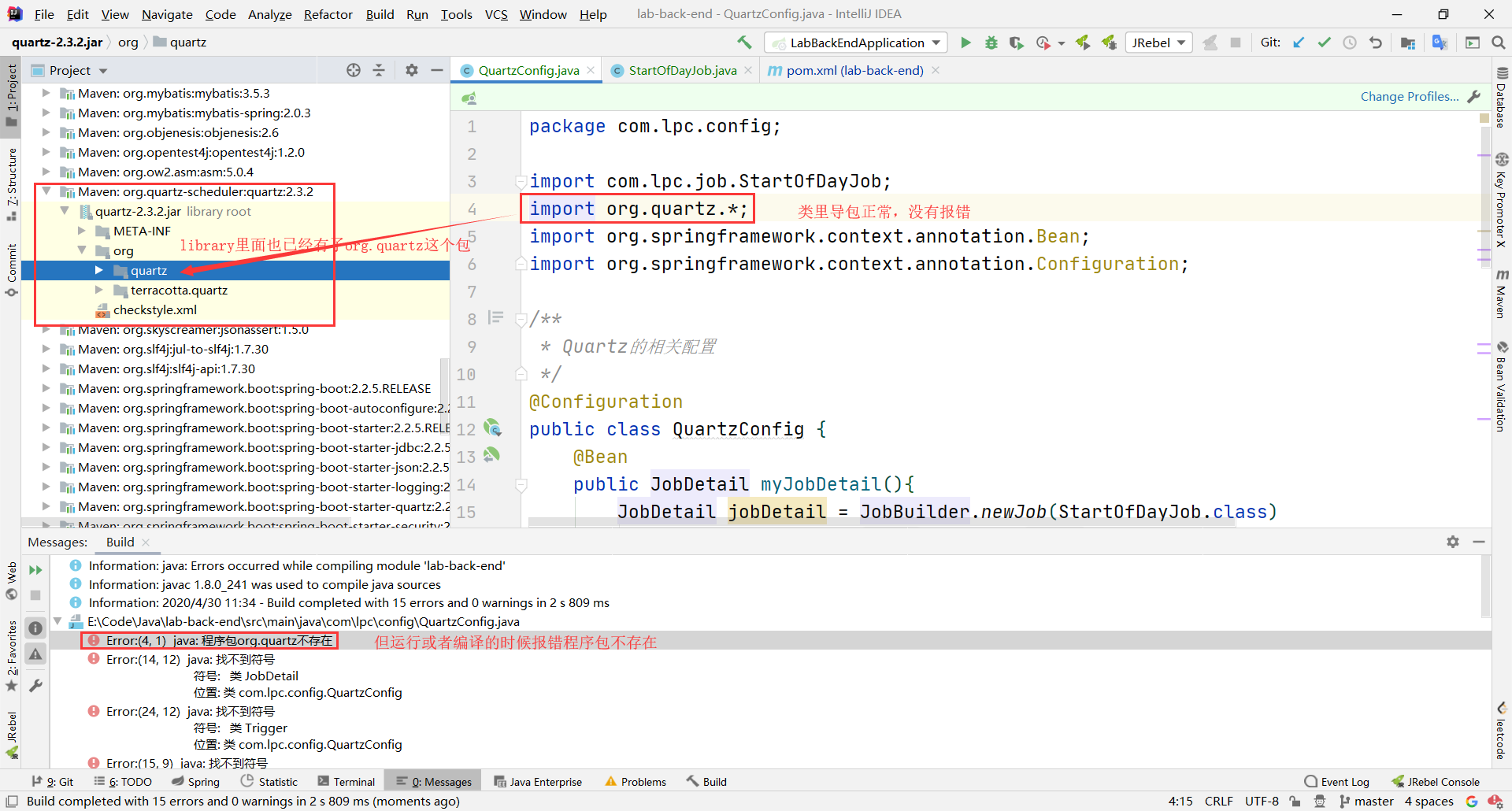