Using HashMap in concurrent programming may lead to program loop, but using thread safe HashTable is very inefficient. In order to solve this problem, ConcurrentHashMap came out.

1) For thread unsafe HashMap, in a multithreaded environment, using HashMap for put operation will cause an endless loop (JDK1.7), which will lead to the problem of data coverage in JDK1.8.

In JDK 1.7, Java uses the Segment lock mechanism to implement ConcurrentHashMap. ConcurrentHashMap saves a Segment array in the object, that is, the whole hash table is divided into multiple segments; Each Segment element, that is, each Segment, is similar to a Hashtable; In this way, when performing the put operation, first locate the Segment to which the element belongs according to the hash algorithm, and then lock the Segment. Therefore, concurrent HashMap can implement multi-threaded put operation in multi-threaded concurrent programming.

The entire ConcurrentHashMap consists of segments, which represent "part" or "paragraph" "Means, so it is described in many places as a segment lock, which can also be called a slot. In short, ConcurrentHashMap is an array of segments. Segments are locked by inheriting ReentrantLock, so each operation that needs to be locked locks a segment. In this way, as long as each segment is thread safe, it can achieve global locking Thread safe.

The following is the structure of ConcurrentHashMap: 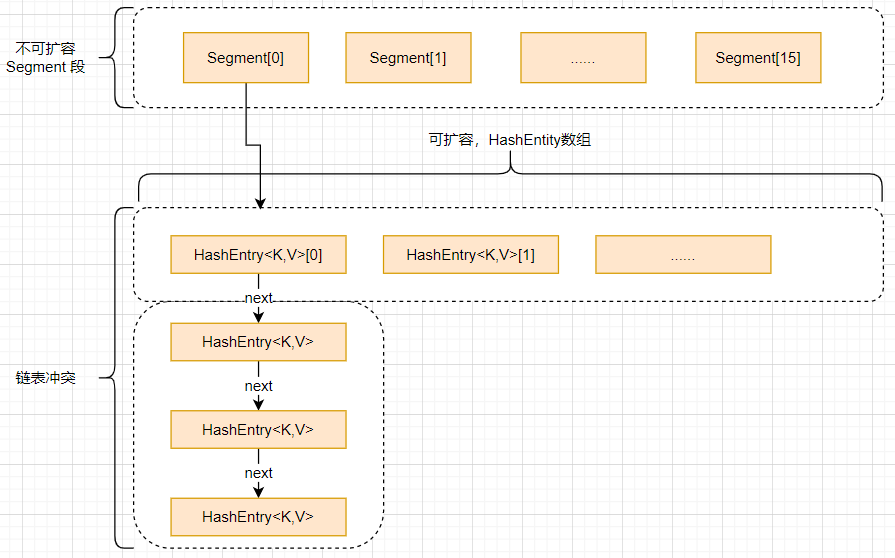 The reference structure is called in the parameter free structure, and the default values of the three parameters are passed in.

Next, let's look at the internal implementation logic of the parametric constructor:

To summarize the initialization logic of ConcurrnetHashMap in Java 7:

3) Find the power value of the nearest 2 above the concurrency level as the initialization capacity. The default is 16.

Let's first look at the main process of put:

The first layer is very simple. You can quickly find the corresponding Segment according to the hash value, and then the put operation inside the Segment, which is composed of array + linked list.

The overall process is relatively simple. Due to the protection of exclusive lock, the internal operation of segment is not complex. Here, the put operation is over.

As we saw earlier, when putting into a segment, we first call node = tryLock()? Null: scanAndLockForPut (key, hash, value), that is, first perform a tryLock() to quickly obtain the exclusive lock of the segment. If it fails, enter the scanAndLockForPut method to obtain the lock. Let's specifically analyze how locking is controlled in this method:

This method has two exits. One is that tryLock() succeeds and the loop terminates. The other is that the number of retries exceeds max_ SCAN_ Restries, go to the lock() method, which will block and wait until the exclusive lock is successfully obtained. This method seems complex, but it actually does one thing, that is, obtain the exclusive lock of the segment, and instantiate the node if necessary.

1) Calculate the hash value and find the specific position in the segment array, or the "slot" we used earlier.

2) The slot is also an array. Find the specific position in the array according to the hash.

1) The initialization slot, which we mentioned earlier, uses CAS to initialize the array in the Segment.

2) The operation of adding nodes to the linked list is inserted into the header. Therefore, if the get operation is in the middle of the process of traversing the linked list at this time, it will not be affected. Of course, another concurrency problem is that after put, the node just inserted into the header needs to be read. This depends on the UNSAFE.putOrderedObject used in the setEntryAt method.

3) Capacity expansion is to create a new array, then migrate the data, and finally set the newTable to the attribute table. Therefore, if the get operation is also in progress at this time, it doesn't matter. If get goes first, it is to query the old table; If put comes first, the visibility guarantee of put operation is that table uses volatile keyword.

2) If the get operation of the remove broken node has passed, there is no problem here.

3) If remove destroys a node first, consider two cases. 1. If this node is a head node, you need to set the next of the head node to the element at this position of the array. Although table uses volatile decoration, volatile does not provide visibility assurance for internal operations of the array. Therefore, UNSAFE is used in the source code to operate the array. See the method setEntryAt. 2. If the node to be deleted is not the head node, it will connect the successor node of the node to be deleted to the predecessor node. The concurrency guarantee here is that the next attribute is volatile.

Prior to JDK1.7, ConcurrentHashMap was implemented through the Segment lock mechanism, so its maximum concurrency is limited by the number of segments. Therefore, in JDK1.8, the implementation principle of ConcurrentHashMap abandons this design, but selects the method of array + linked list + red black tree similar to HashMap, while CAS and synchronized are used for locking. 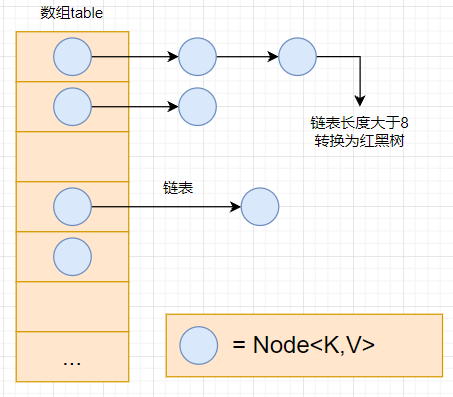 The structure is basically the same as the HashMap of Java 8, but it needs to ensure thread safety, so it really needs to be complex in the source code.

By providing the initial capacity, sizeCtl is calculated, sizeCtl = [(1.5 * initialCapacity + 1), and then take the nth power of the nearest 2 upward]

This is relatively simple. It mainly initializes an array of appropriate size, and then sets sizeCtl. The concurrency problem in the initialization method is controlled by performing a CAS operation on sizeCtl.

We also said in the put source code analysis earlier that treeifyBin does not necessarily carry out red black tree conversion, or it may only do array expansion.

The capacity expansion here is also doubled. After expansion, the array capacity is twice that of the original.

Therefore, the possible operation is to execute transfer(tab, null) + multiple transfers (tab, NT). How to end the cycle here needs to read the transfer source code.

Migrate the elements of the original tab array to the new nextTab array.

2) Find the corresponding position of the array according to the hash value: (n - 1) & H.

3) Search according to the properties of the node at this location.

HashTable: the synchronized keyword is used to lock put and other operations