There is a Timer class under the java.util package, which is used to implement scheduled tasks

2. Call the schedule polymorphic method of timer object and select the way to execute the task according to the different incoming parameters

When we instantiate the object of Timer class, it will create a thread for later task execution. This is a major feature of using the Timer class to perform scheduled tasks. If there is a thread exception in our scenario, but other tasks can continue to execute other tasks, the use of Timer must not meet the requirements.

After JDK1.5, Doug Lea introduced ScheduledExecutorService under the Java concurrency package. It has the feature of reusing threads in the thread pool and supports multithreading. If one thread hangs, it will not affect the operation of other threads (the thread with exception will be discarded by the waiters queue of the thread pool, that is, it will become a thread with null task). For details on how thread pools are discarded, please refer to: On the underlying source code of ThreadPoolExecutor thread pool

According to the class diagram, ScheduledExecutorService is a subclass of ThreadPoolExecutor, which has the characteristics of thread pool 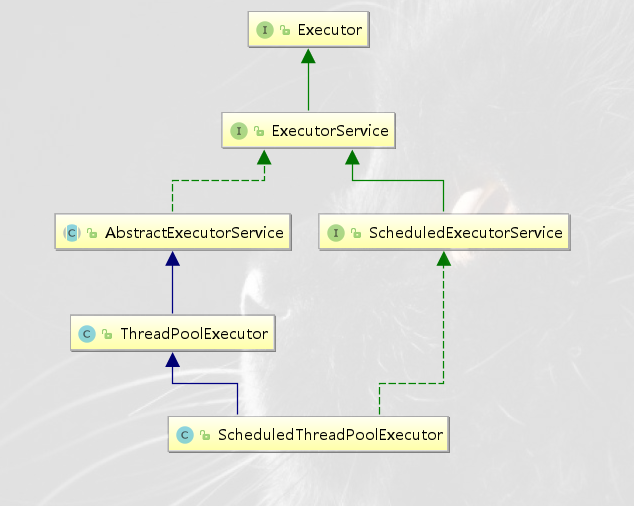 The four test cases correspond to the four API s in the ScheduledExecutorService interface. The corresponding effect is written in the comment log of the above code 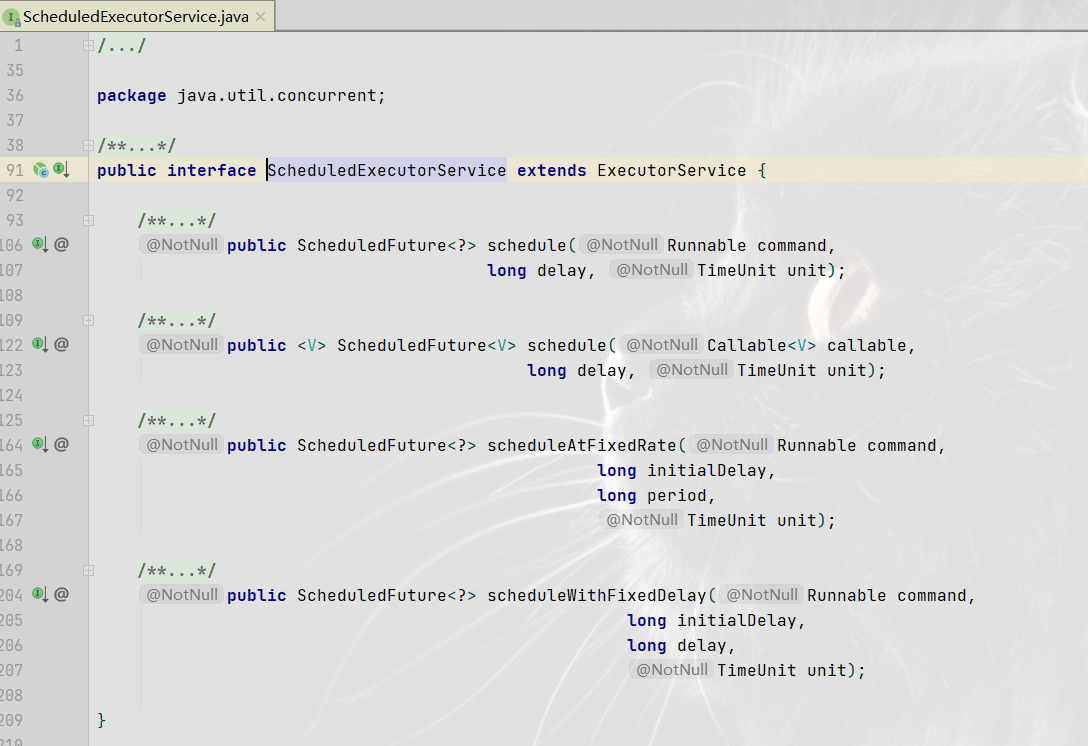 And thread pools are analyzed in roughly the same order

1. The scheduleAtFixedRate method is used as the entry (the other three methods are similar, but different methods set different parameters for later condition judgment). Note that sft.outerTask = t here, which will appear again later 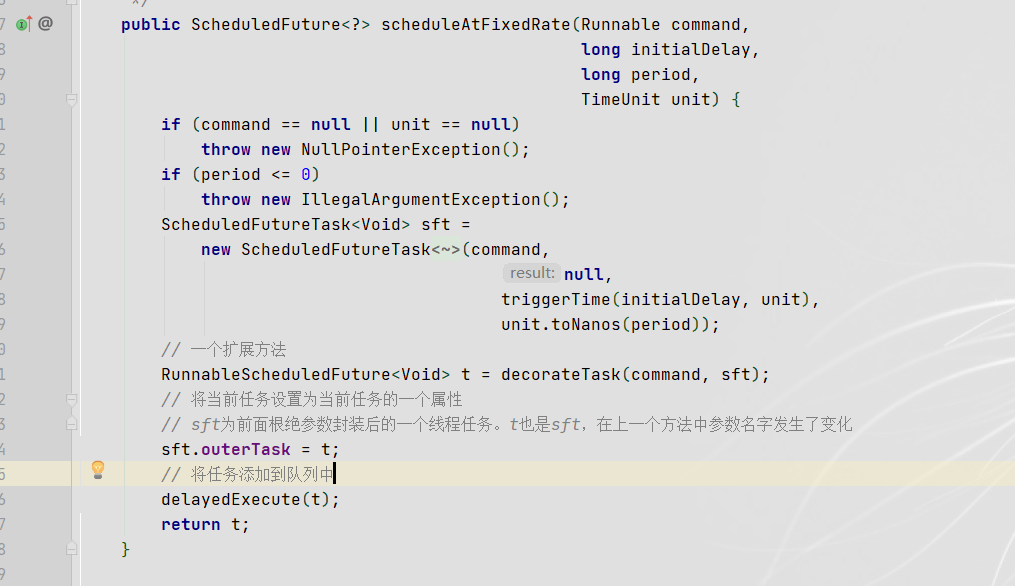 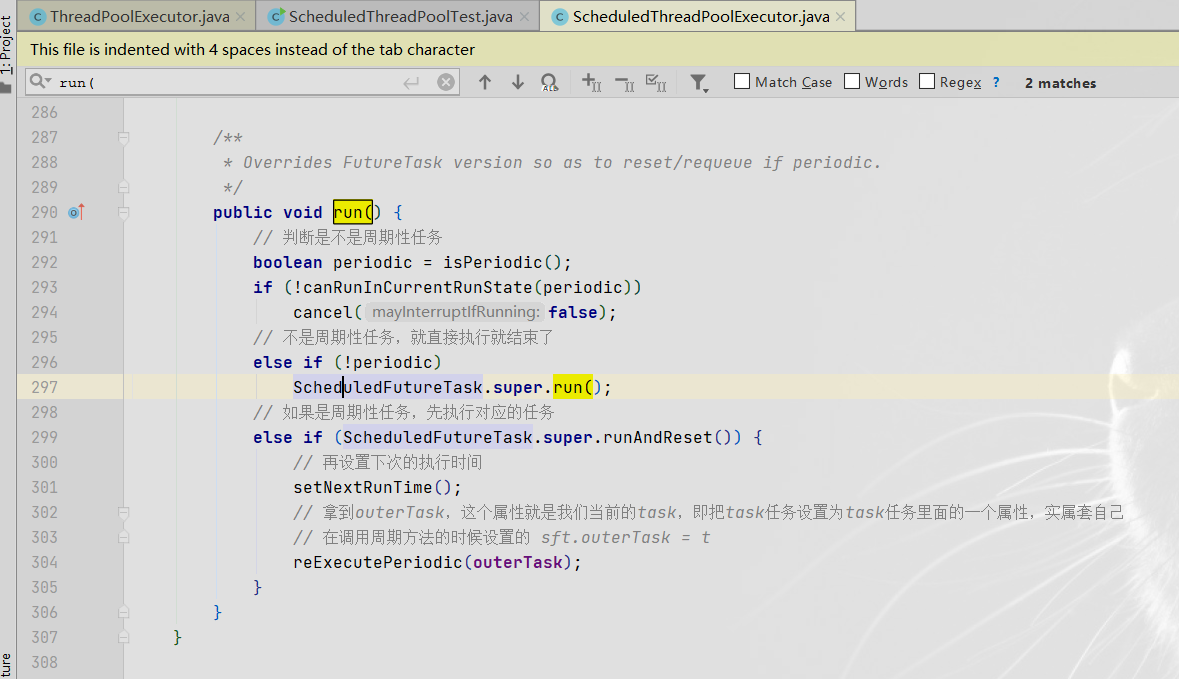 5. The next execution of a recurring task,

Add: the implementation of delayed thread pool is not difficult to understand. The DelayQueue queue is internally maintained, and the priority queue is used in the DelayQueue queue. Its internal implementation is based on the binary heap data structure (for those who are not familiar with the common queues under concurrent packages, please refer to my previous blog: Simple learning of seven common queues , the concept of these queues must be understood clearly, which is very important for you to learn the whole concurrency knowledge). In addition, the elements inside DelayQueue can be sorted according to rules based on the Comparable interface, that is, the effect of out of the queue in the specified order is achieved.

At present, there are many task scheduling components. In addition to the Timer and scheduled executorservice mentioned above, there are also spring tasks, Quartz, XXL job, elastic job, etc. But I think learning JDK's own components well is the basis for studying other components!!!