Fibers and threads essentially work the same way. Threads switch through stacks, and so do fibers, which are records and switches of stacks. Fibers are threads in user space.

Threads are managed by the operating system kernel (in the kernel state), and collaborations are controlled by programs (in the user state)

The benefit of using fibers is to simplify thread switching

When to recommend using a protocol: In a large number of short-term operations, we use a protocol to replace threads, which works best, first reduces system memory, second reduces system switching overhead, and improves system performance

Use of Fibers in Java

JVM does not support fibers, Java needs to use fibers through the external library: Quaser Fiber Library 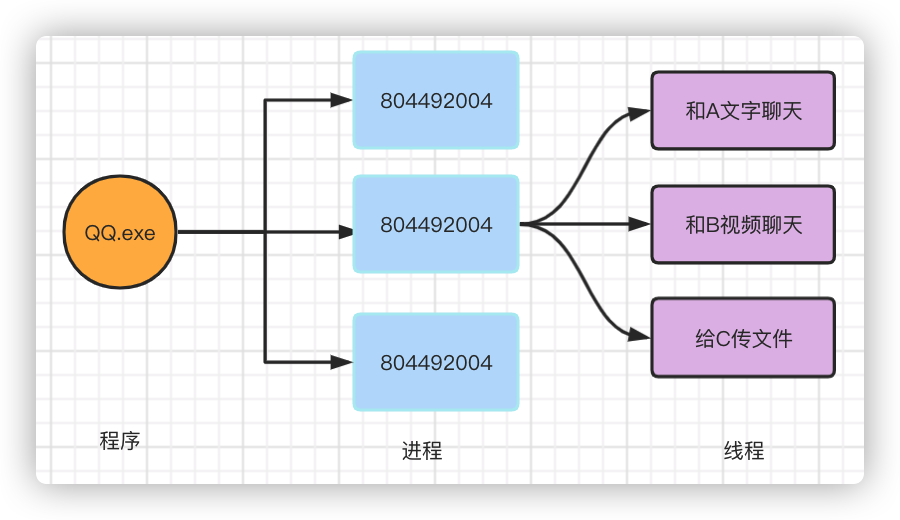 Work threads are not as many as possible, because switching threads consumes system resources

How many threads are appropriate depends on the machine configuration, the number of processor cores, the combination of formulas, and a strong pressure test.

Parallelism is a subset of concurrency. 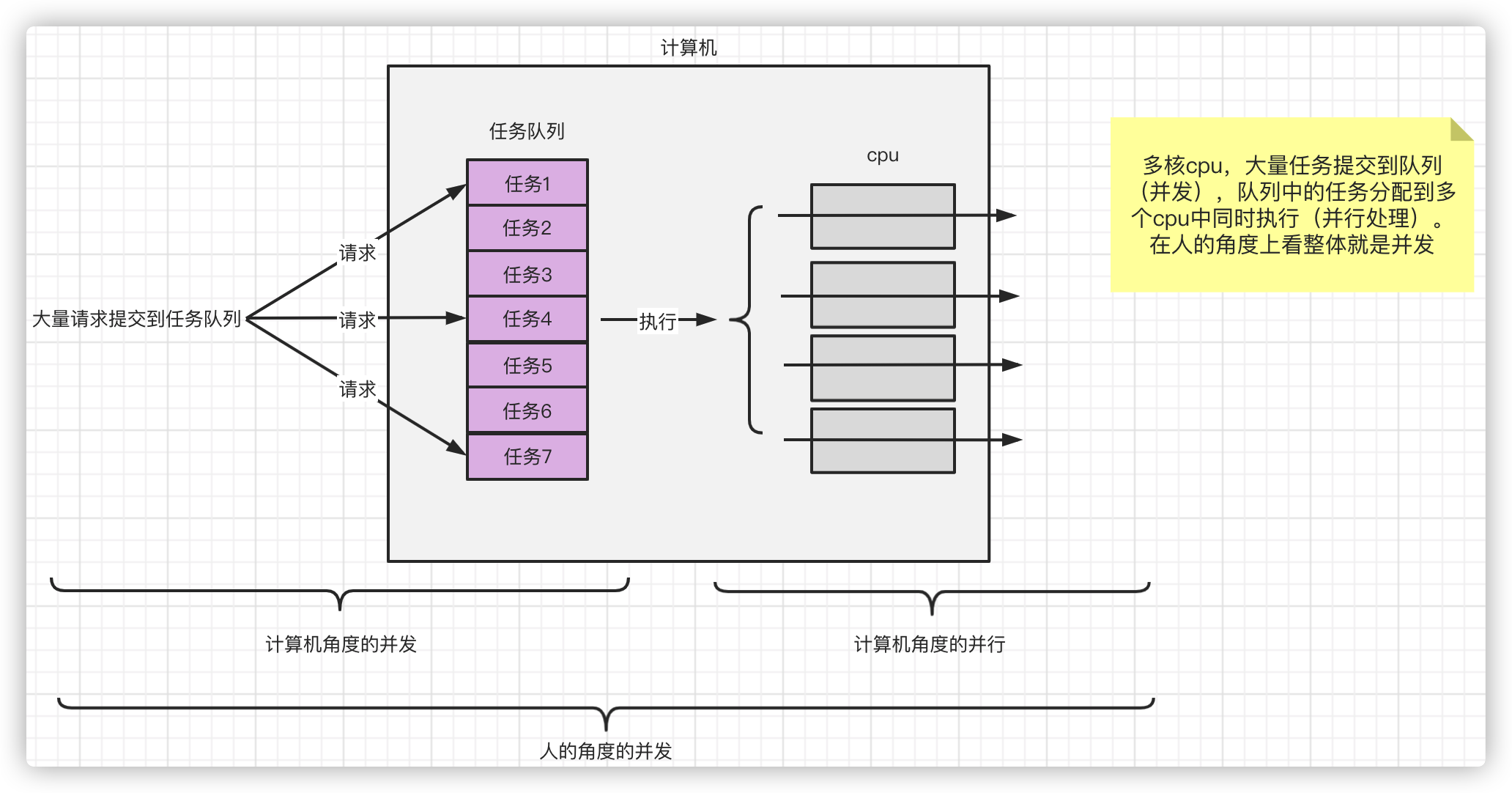 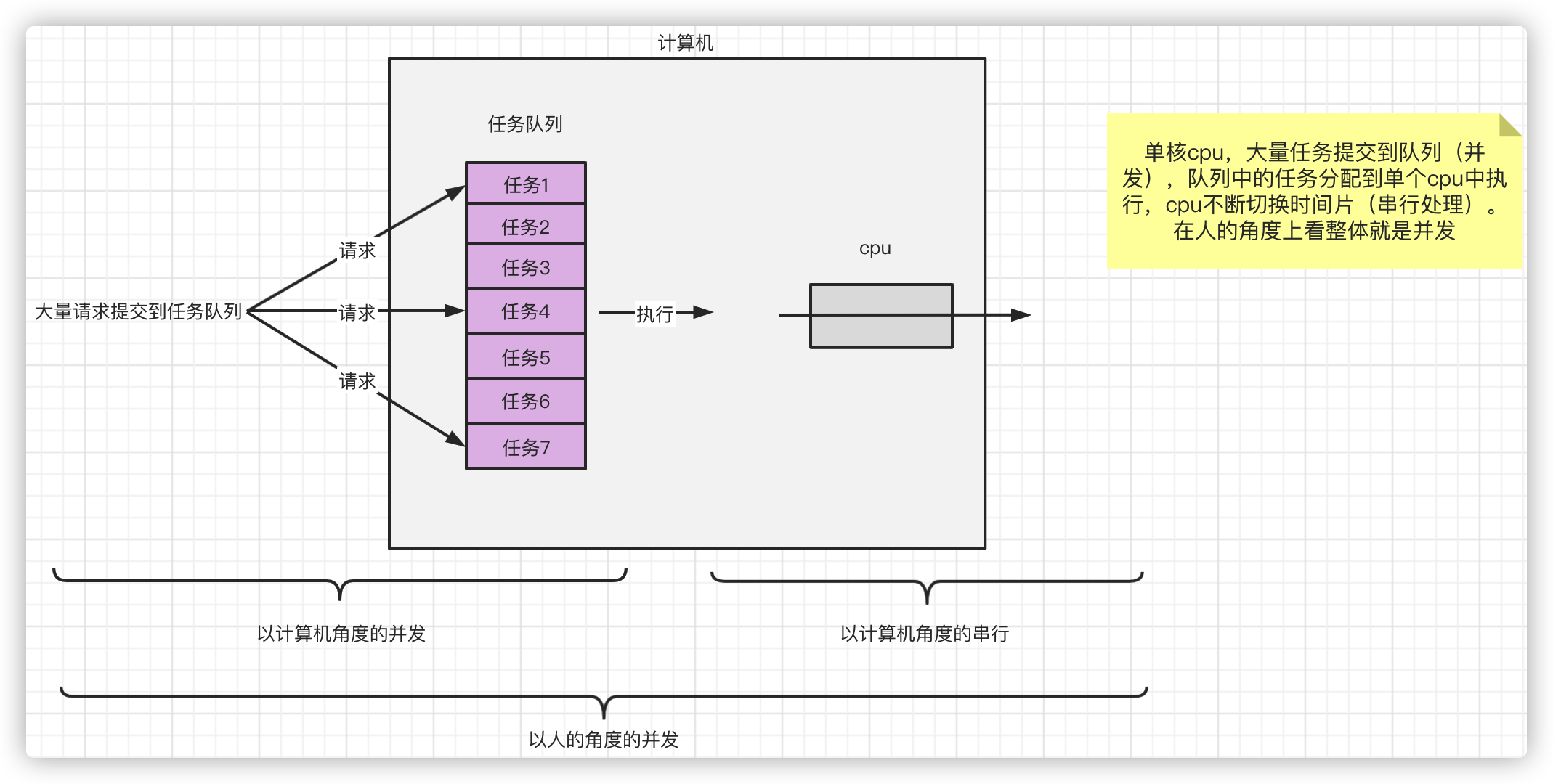 The essence of a lock is not a lock on operating system resources, but which thread gets the lock and holds the lock

The object header contains 8 bits (64bit), where 2 bits represent the state of the lock

A brief introduction to synchornized

synchronized guarantees both atomicity and visibility

Exception locks will be released in the program

synchornized lock object must have final

For example, synchornized(o) {} must have final Object o = new Object();Because if one object is not final, the lock will become invalid when another thread changes the o lock. (The flag bits of the lock in the object header will be lost when the object is changed)

Because of the character of the string constant pool: the same string is the same object. If a String is used as a lock, it is likely that synchronous code in different classes will hold the same lock

There are two synchronized methods, with the same lock, which can be called from one thread to another

m1 calls m2, and when M2 is executed, the same lock is found and the same object is locked, no further locks are needed

Sometimes there is no need to lock on a method because there may be a lot of execution logic on a method and the granularity of the lock on the method is too large. Sometimes there is no need to synchronize the whole method. For locking, the code can lock as little as possible. So you can optimize the lock more finely by adding a synchronization code block to the method.

The reason for this lock upgrade is:

Threads take an especially long time to execute and heavy locks are recommended.

Threads have a short execution time and a small number of threads. Spin locks are recommended. --- Because spin locks switch quickly based on user state, fewer threads with spin locks do not waste CPU resources.

Attempting to lock using tryLock requires a specified time, after which the method will continue executing regardless of whether the lock is locked or not
The return value of tryLock can be used to determine whether a lock is present.
You can also specify a time for tryLock, since tryLock(time) throws exceptions, be aware that unclock processing must be placed in finally to unlock

The difference between synchronized and Lock

CountDownLatch has a numeric parameter. Threads counted by countDown() execute first, then by calling await().

Principle: CyclicBarrier literally means a barrier (Barrier) used by Cyclic. What it does is get a set of threads to a barrier (also known as a synchronization point)The barrier is blocked until the last thread reaches the barrier, and all the threads blocked by the barrier continue to work. Threads enter the barrier and pass through the CyclicBarrier's await() method.

There are two ways:

Seven states of a thread

Essentially, you let the cpu execute for other threads, which are running -> read ready. You don't care what happens next (you won't release the lock)

The first three are methods in the Thread class, while wait/notify is a method in the Object class that controls the thread holding the object lock to wait and notify other threads.

Note: wait() releases the current object lock, but notify() only notifies other threads to wake up without releasing the lock

Interview Question: How to ensure the execution order of threads? 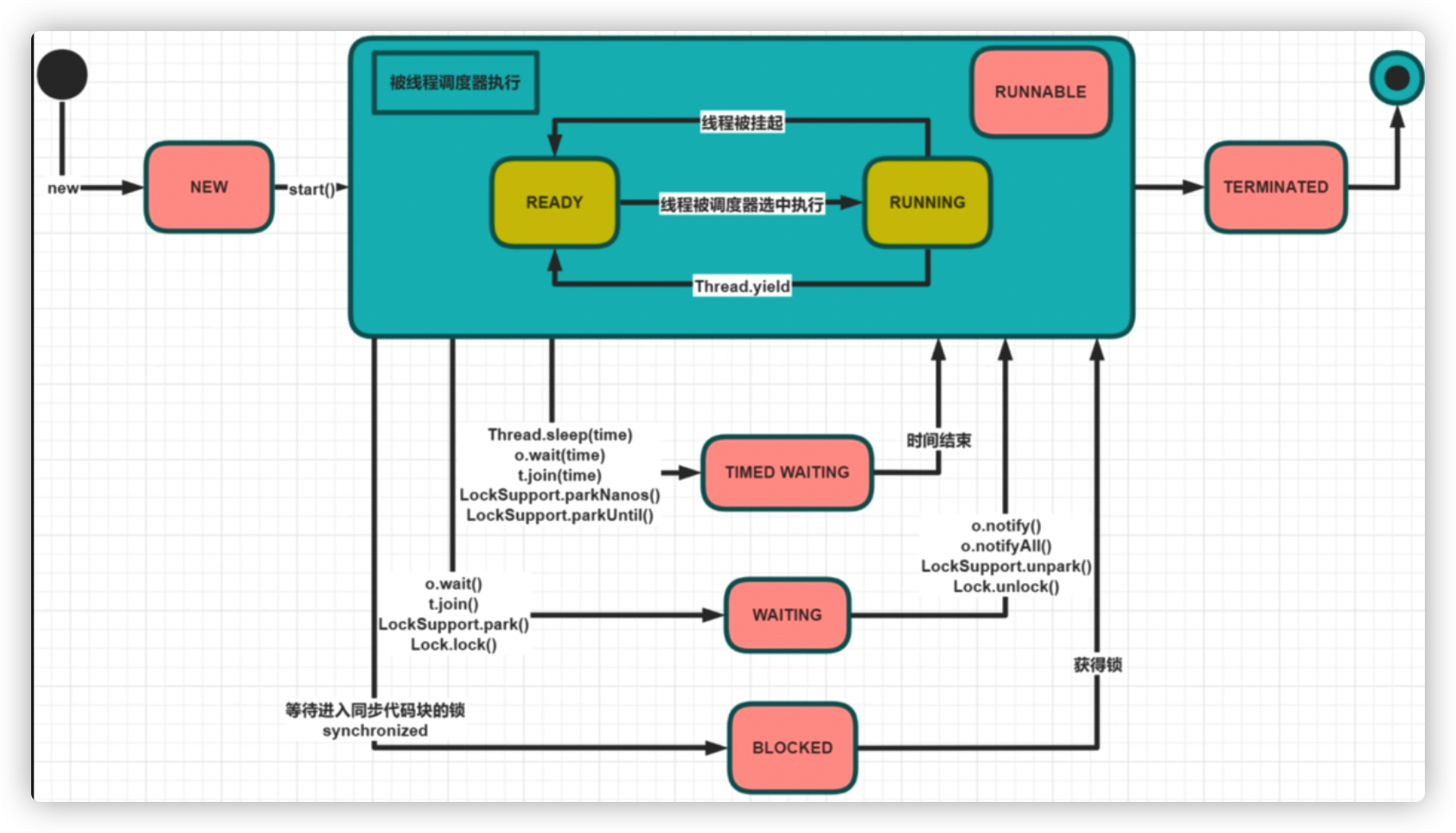 Differences between sleep and wait

How threads are created 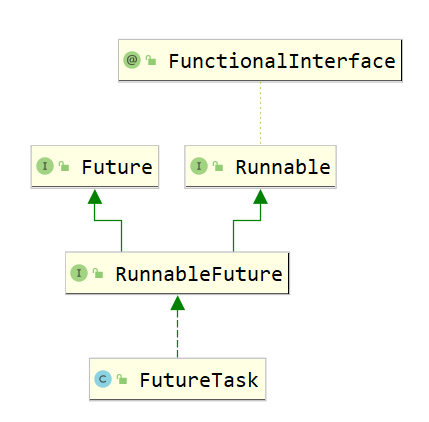 Answer: (1) Is there a return value

(2) Whether to throw an exception

(3) The landing methods are different, one is run, the other is call.

Ultimately, it's essentially a way for new to create a Thread() object and then call start().

There are many classes that use CAS at the bottom, CAS is lock-free optimization.

Threads do not lock when reading data. When preparing to write back data, they query the original value first, compare whether the original value is modified during operation, write back if it is not modified by other threads, and re-execute the reading process if it has been modified. This is lock-free optimization.

Note: The above is just an analogy of CAS through mysql operation. In fact, comparing + updating in CAS is an atomic operation supported by CPU primitive 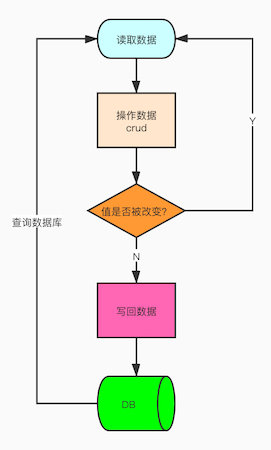 Principle of CAS in Java

Three basic operands are used in the CAS mechanism: the memory address V, the old expected value A, and the new value B to be modified.

For example, change a number from 1 to 2, and before changing, see if 1, 1 is the expected value

Note: Judgment and modification are atomic operations, supported by the cpu source language

The spin lock is not a physical lock, but a logical lock. It is based on the CAS feature. It enters a deadlock through the CAS feature, and ultimately must be compared and exchanged successfully before exiting. The deadlock process is logically locked. 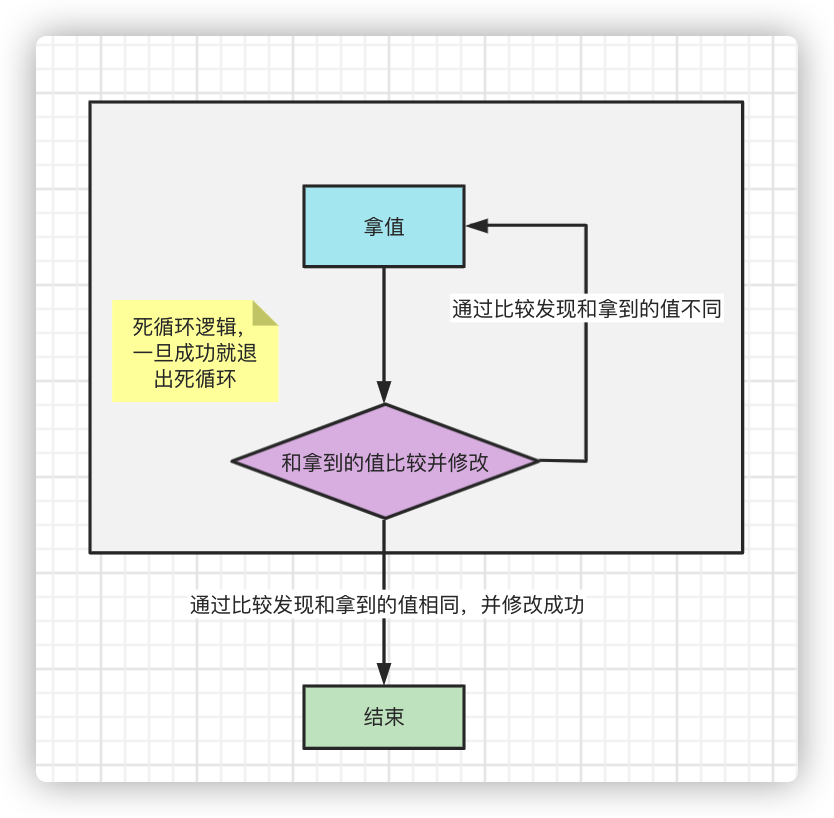 The spin operation is achieved by CAS mechanism + dead-cycle judgment.

This is how spin locks work, allowing thread safety

Threads take an especially long time to execute and heavy locks are recommended.

Thread execution time is short, but the number of threads cannot be too large. Spin locks are recommended because spin operations consume cpu resources

Make your own handwritten lock

In addition to the Atomic and Lock family classes mentioned above, the CAS mechanism is used in java even before JAVA1.6 or above turns synchronized into a heavy lock.

In the case of high concurrency, many threads try to check and update a variable repeatedly, but they are not expected. If the update is unsuccessful for a long time, they will spin all the time, which is equivalent to a dead cycle and will put a lot of pressure on the CPU. 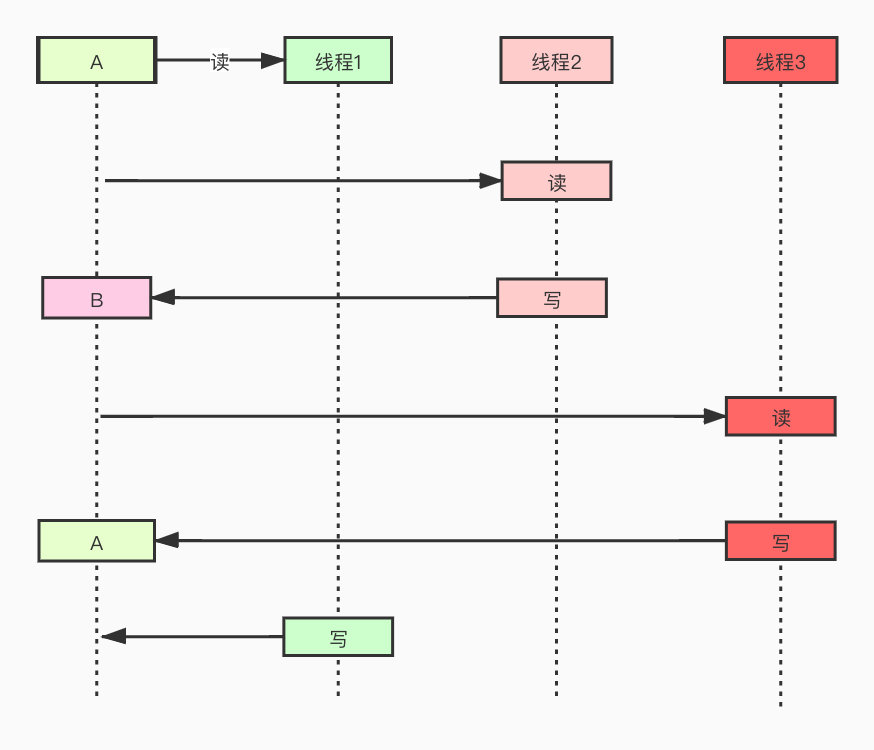 However, in the actual process, you still need to record the process of modification, such as what the funds modify. Every time you modify, you should have a record to facilitate backtracking.

The Java language does not have direct access to the underlying operating system like C and C++, but JVM provides us with a unsafe class that calls many c++ methods.

Core: There is a shared state value + threads grabbing each other (threadqueue) 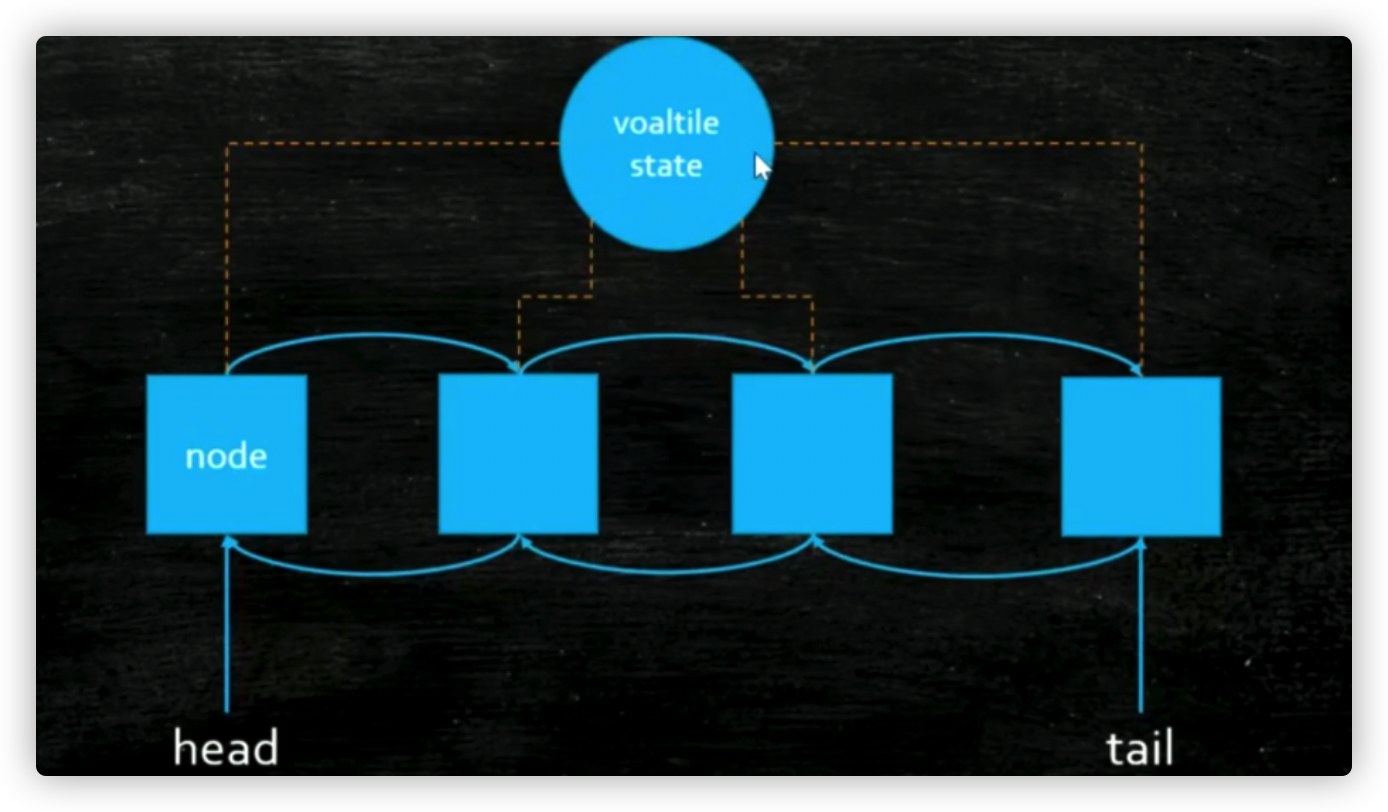 AQS Interpretation with ReentrantLock as an Example

addWaiter: Add a thread to the end of the queue

A new thread executes a task to try to acquire a lock first. If it cannot acquire a lock, it joins the end of the AQS queue. The process of joining the queue is based on CAS. Purpose: If CAS is not used, the entire chain table will be locked, which is inefficient.

Threads in the acquireQueued queue attempt to acquire locks

Dead loop, from the end of the queue, each node gets the node in front of it until the head node finally gets the lock to end the cycle. The head node is garbage collected.

Can point to the same reference as a variable 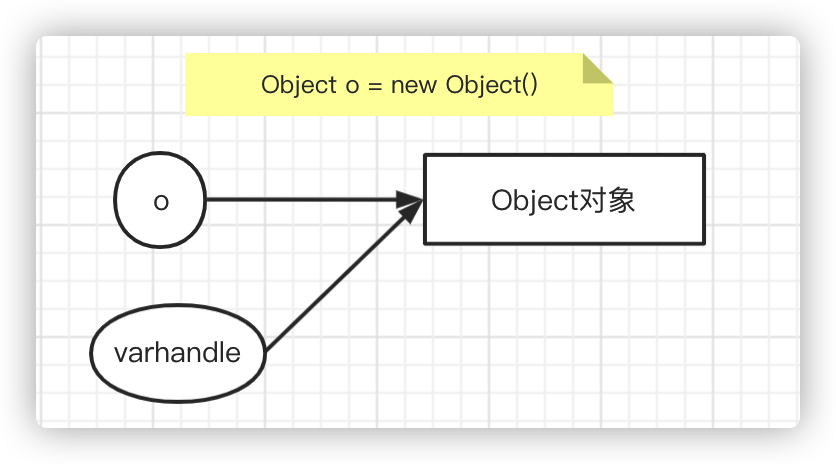 You can do things that reference itself cannot do, such as CAS atomic operations

Example: addWaiter in CAS was implemented based on VarHandle after jdk9 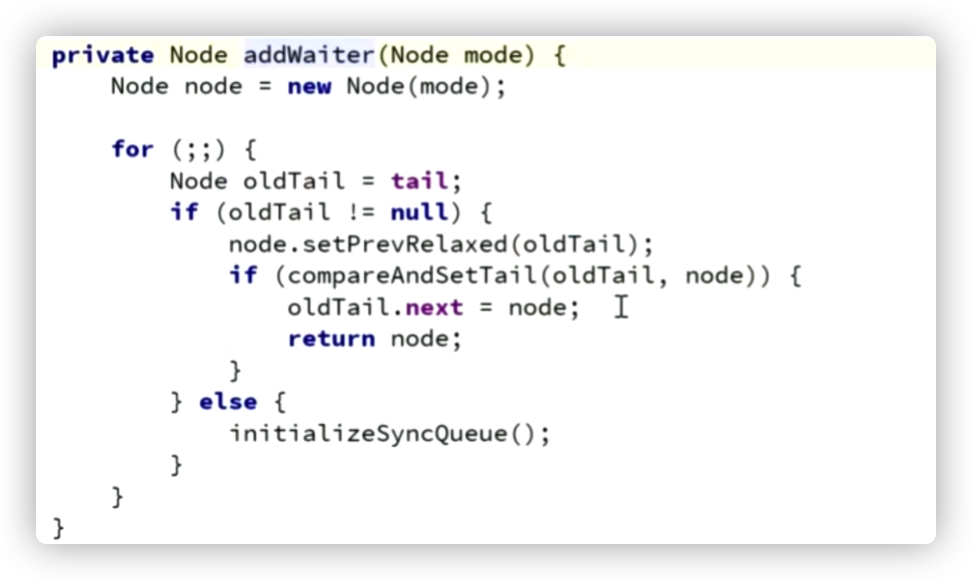 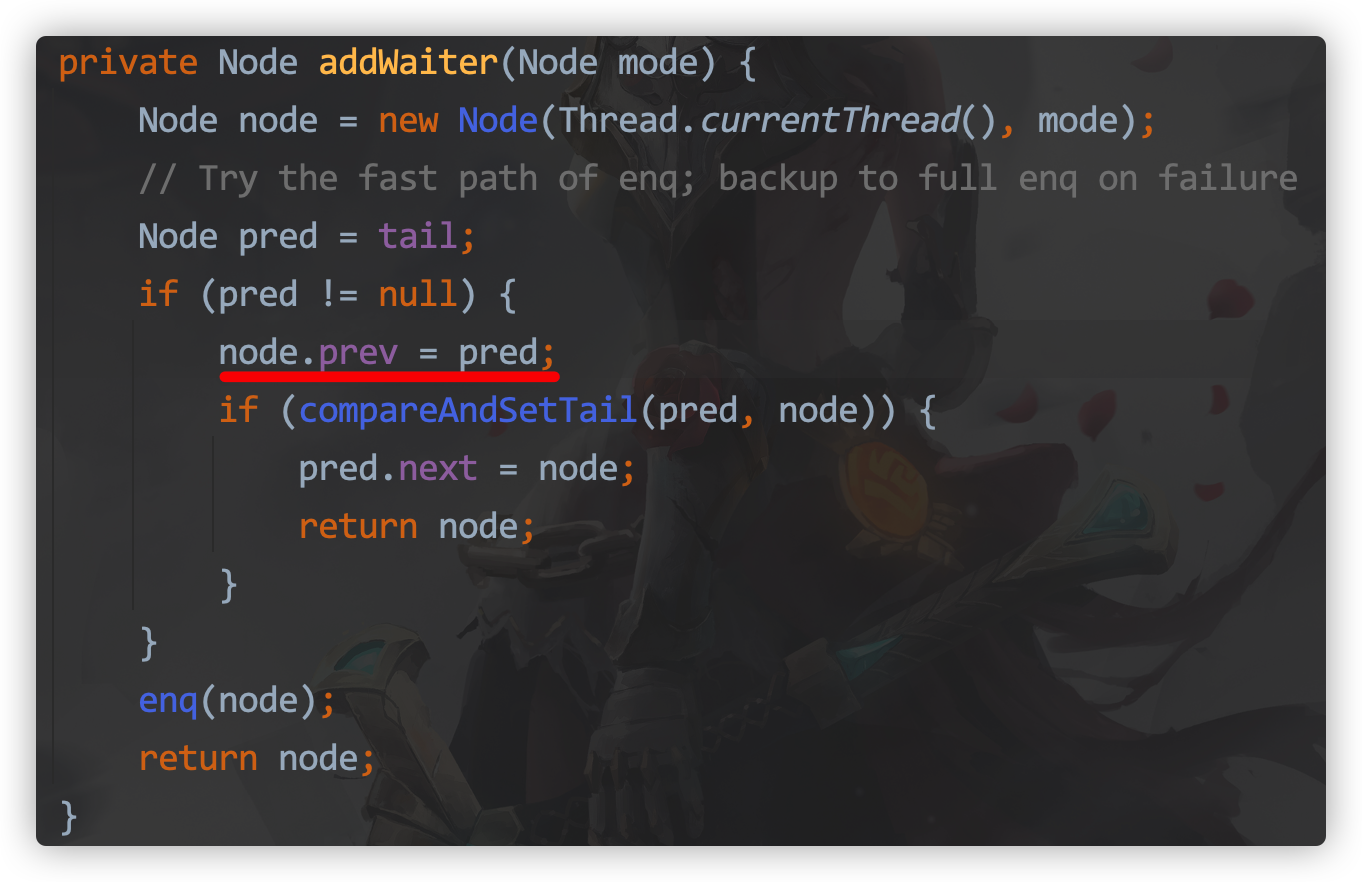 Local variables are not shared

ThreadLocal is a map inside the current thread

K is the current Thread Local object in the KV of this map, and V is the set value

The set and get for ThreadLocal are as follows

A reference is a variable pointing to an object

A normal reference is a strong reference, which calls the finalize method when garbage is collected

The role of soft references: as caches

Weak references are recycled whenever they encounter GC. 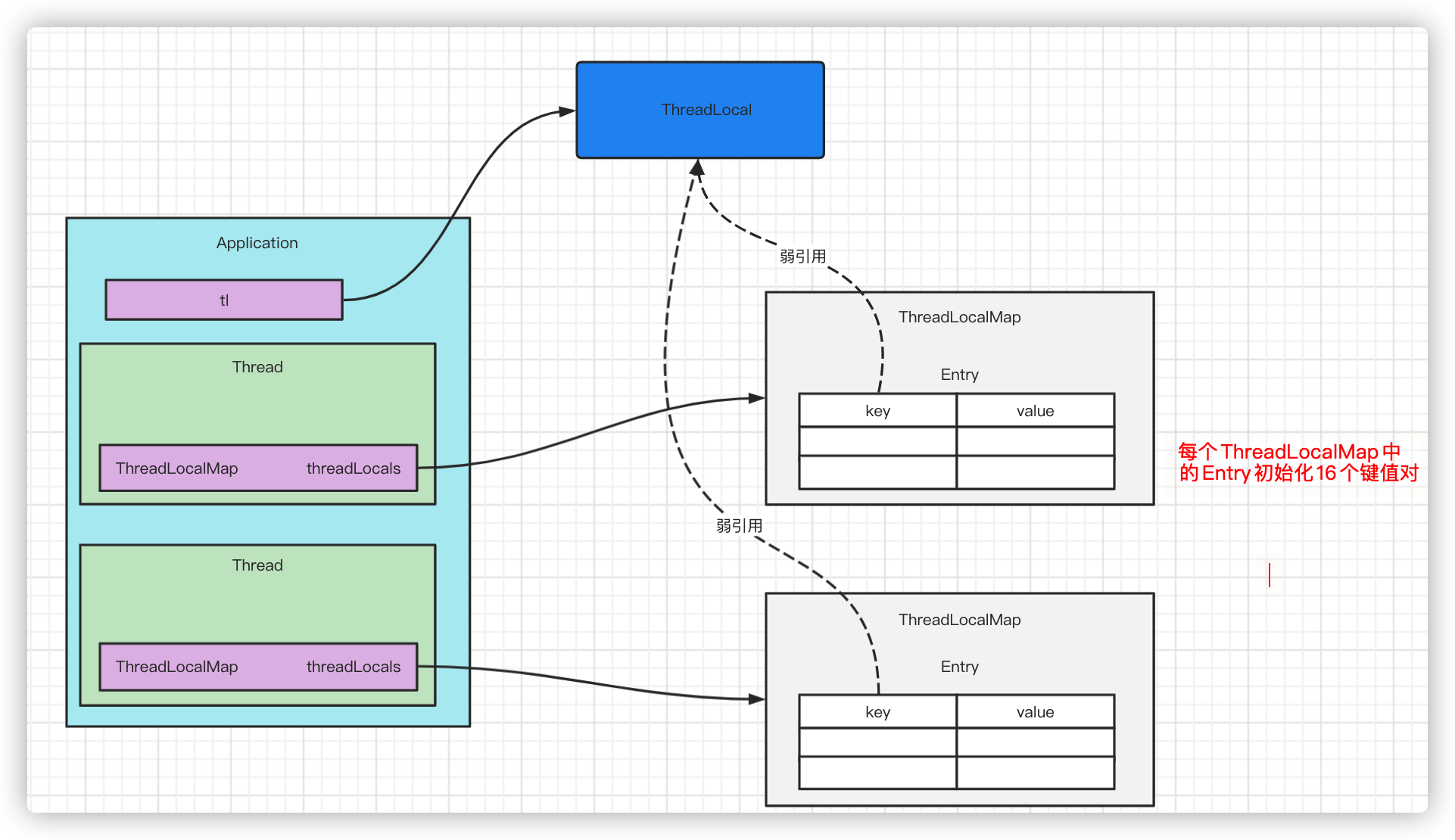 Question 1: Why should I set a reference to a threadlocal object?

Think about it with your thighs and combine the above illustration. If there is no reference to a threadLocal object, the new ThreadLocal() is a fiction.

If ThreadLocal is recycled, the value of the key becomes null, causing the entire value to no longer be accessible, so there is still a memory leak

Solution: ThreadLocal is exhausted, make sure to remove it manually! Otherwise, it will cause memory leak. 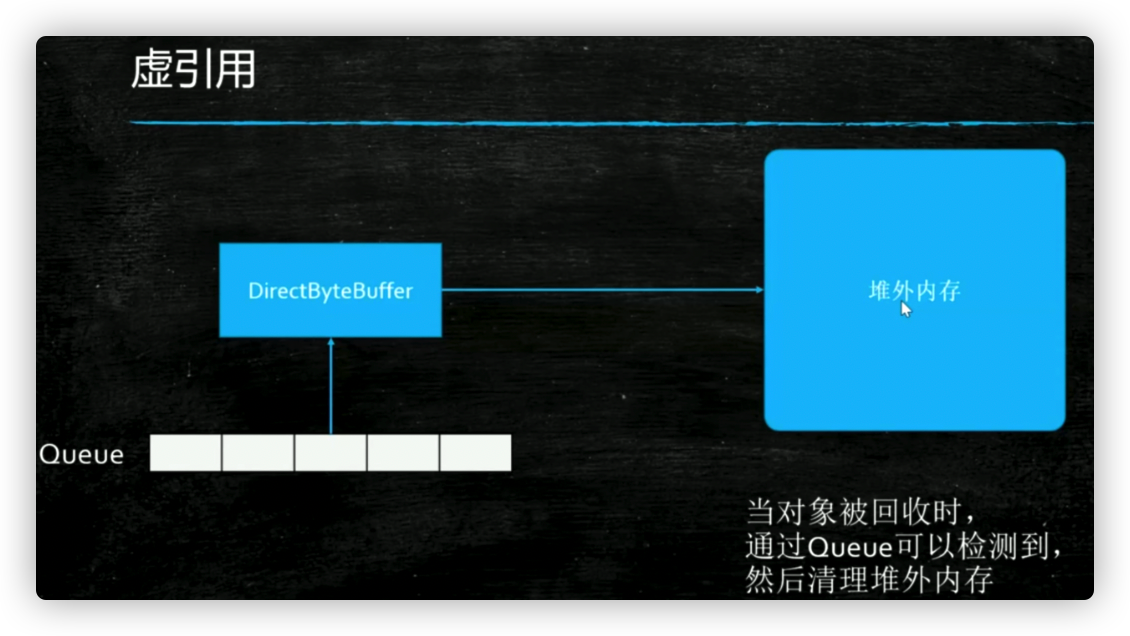 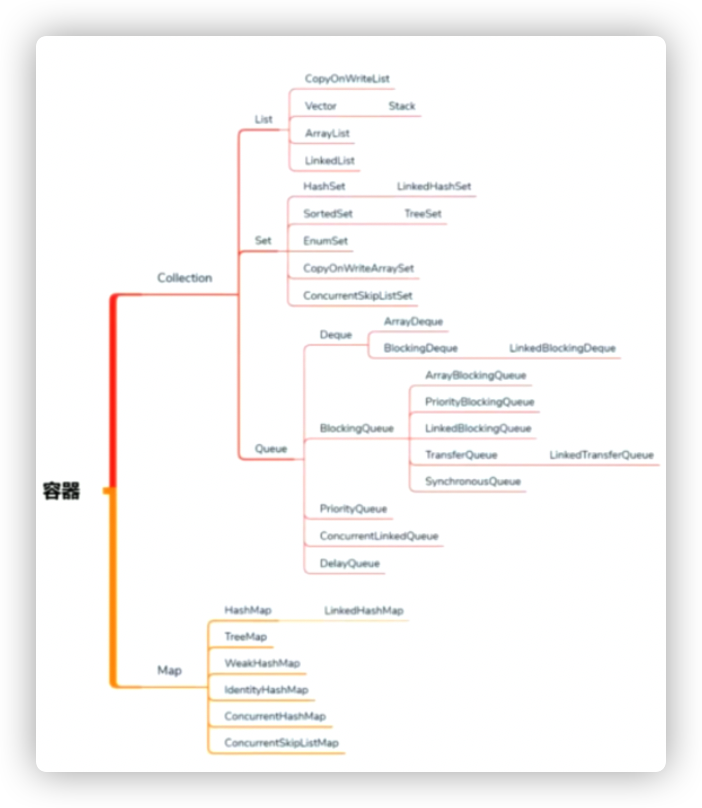 HashMap has thread security issues in a multi-threaded environment. What do you normally do?

Because ArrayList will throw a java.util.ConcurrentModificationException exception if it is modified at the same time during iteration: concurrent modification exception 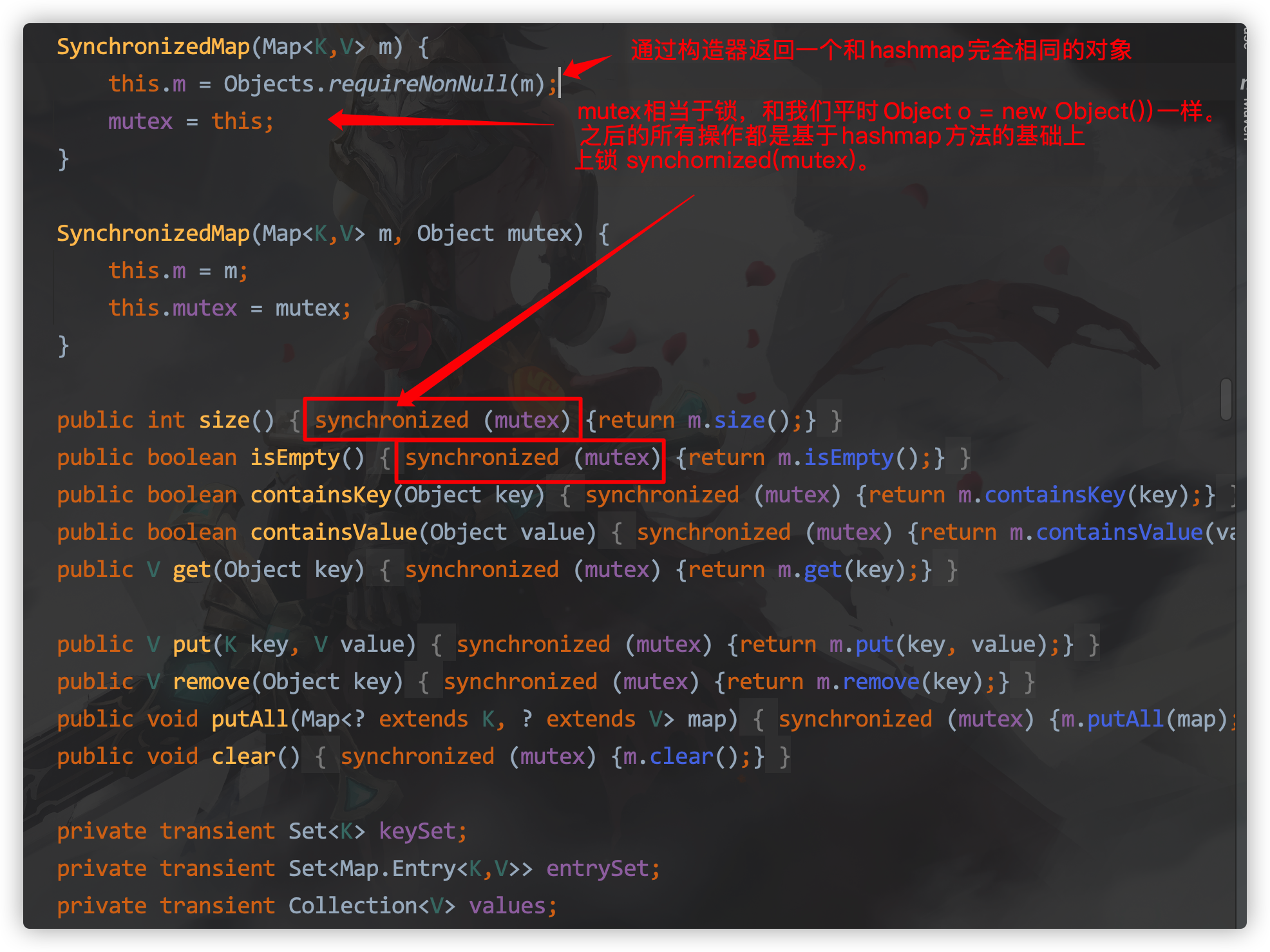 Mutex is equivalent to a lock, just like Object o = new Object (). All subsequent operations are based on synchornized(mutex) on the hashmap method.

The underlying structure of ConcurrentHashMap is an array + Chain table.

ConcurrentHashMap is a more complex put operation, which can be roughly divided into the following steps:

ConcurrentHashMap is also thread-safe Map, which is more efficient than HashTable because it uses spin-lock + segmented-lock when writing, and concurrenthashmap with a smaller granularity of locks is mainly read because the read method is not locked. 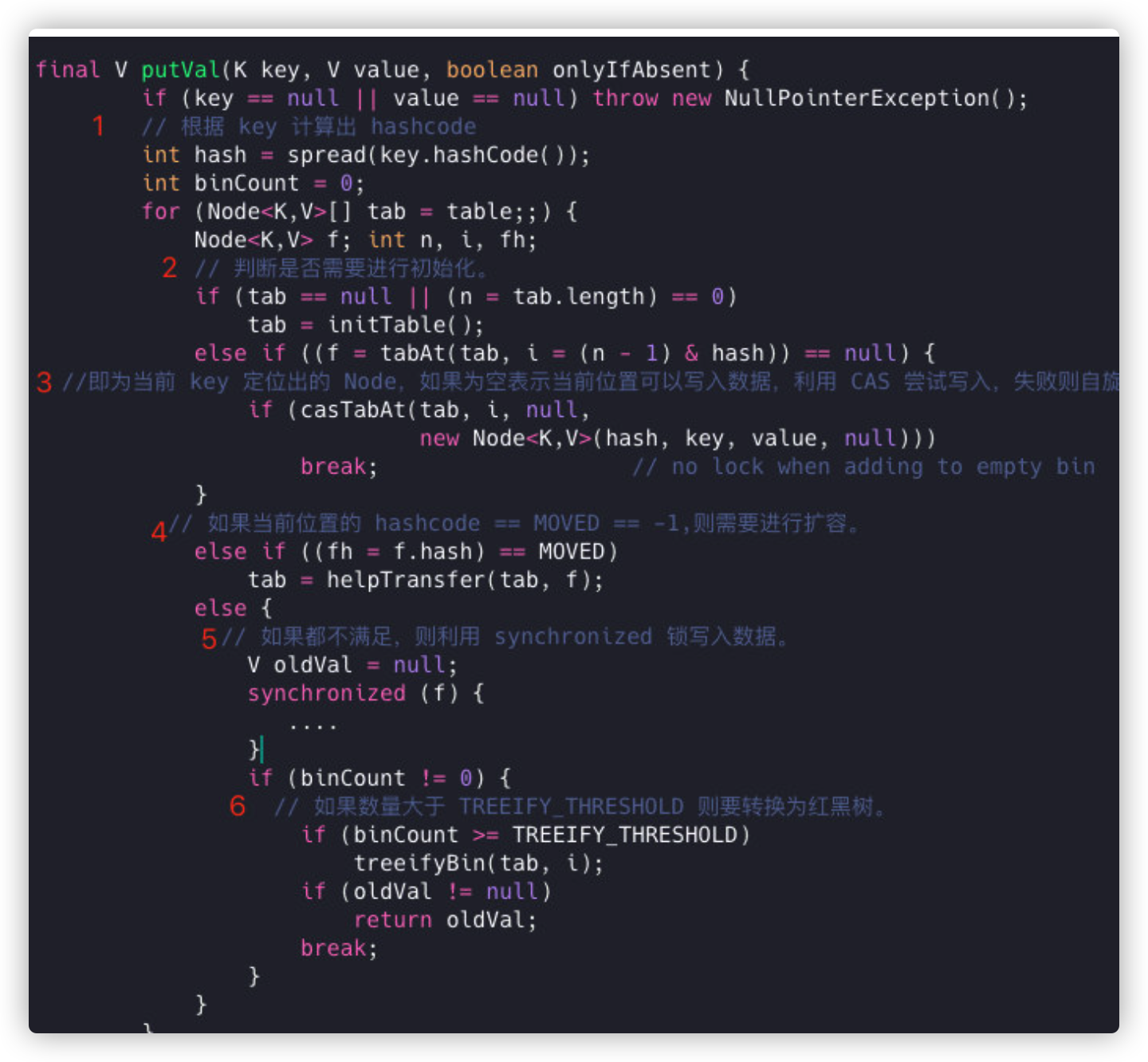 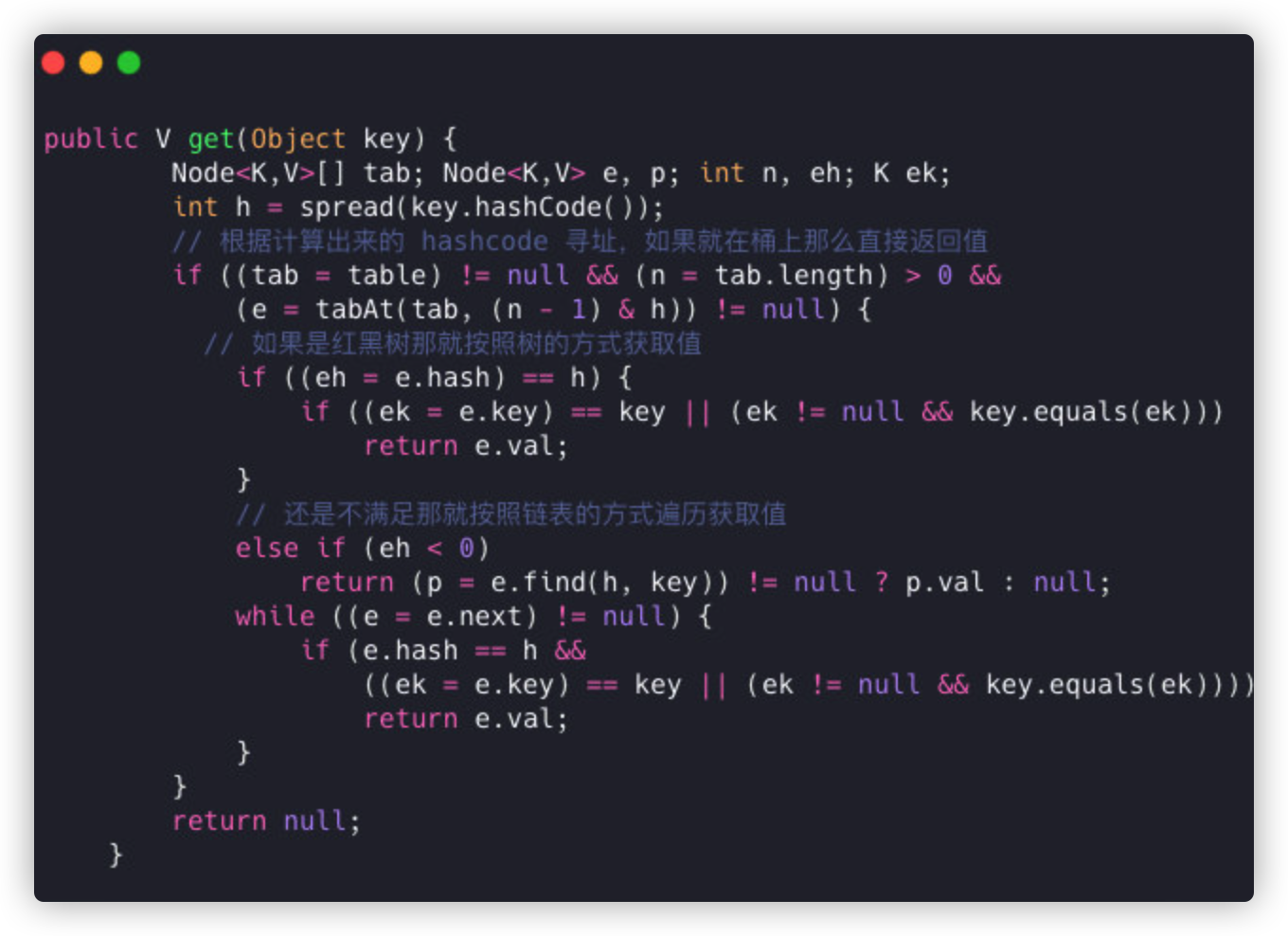 **Note:**TreeMap uses red and black trees, which are efficient for searching

Therefore, a concurrent map: ConcurrentSkipListMap jump table implementation based on the jump table structure is proposed.

Read without locking, write with a new ArrayList copied, add it later, and replace the old reference. 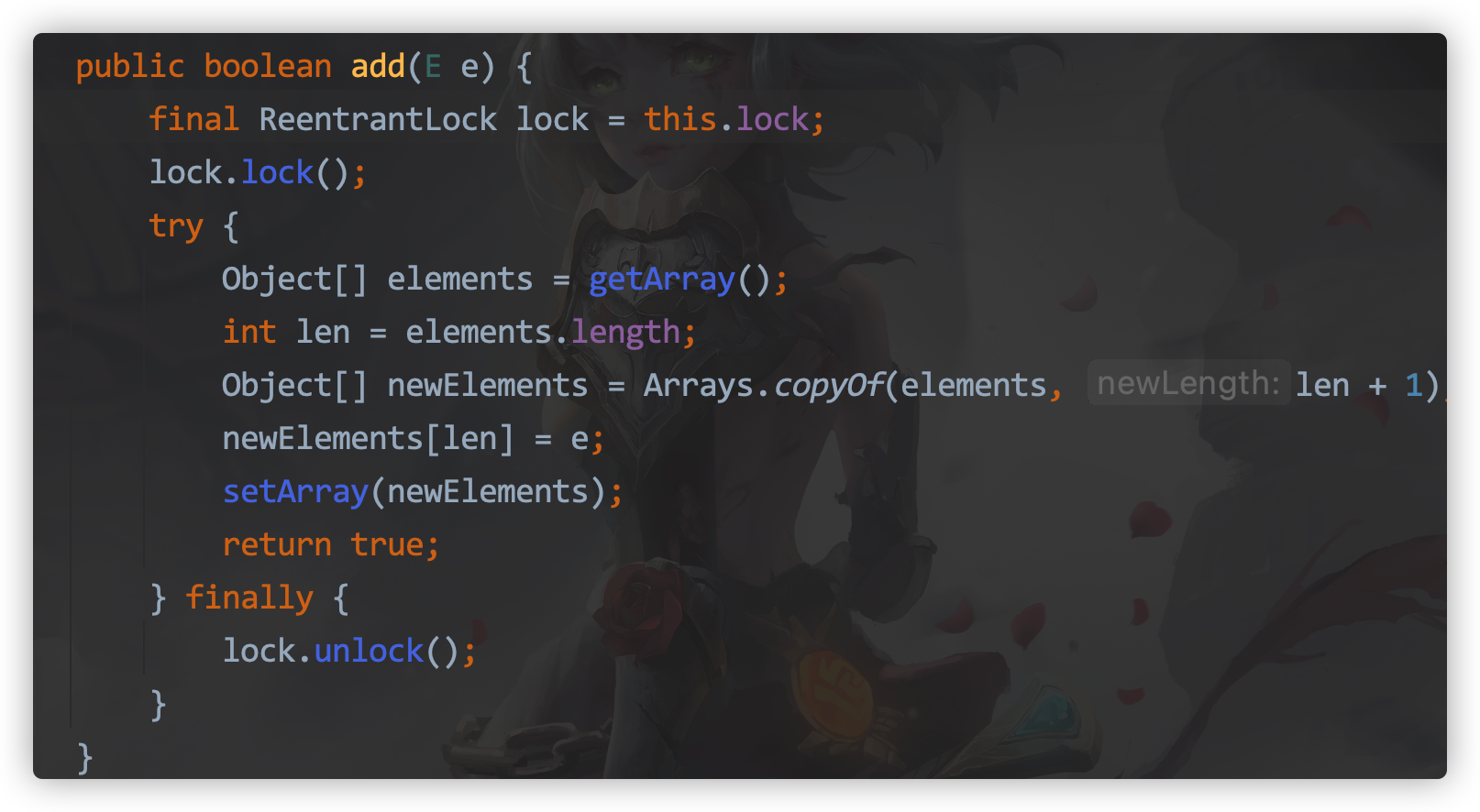 **Note: **Hashtable and Concurrent HashMap do not allow keys to be null or null compared to HashMap; HashMap allows keys to be null. It is unclear whether keys are null or not in multithreaded situations

As for BlockingQueue, it is the underlying model for implementing MQ (message queue) for its put and take blocking methods

Advantages of thread pools: Maximum concurrency is controlled by controlling the number of threads, making it easy to manage threads, and thread reuse 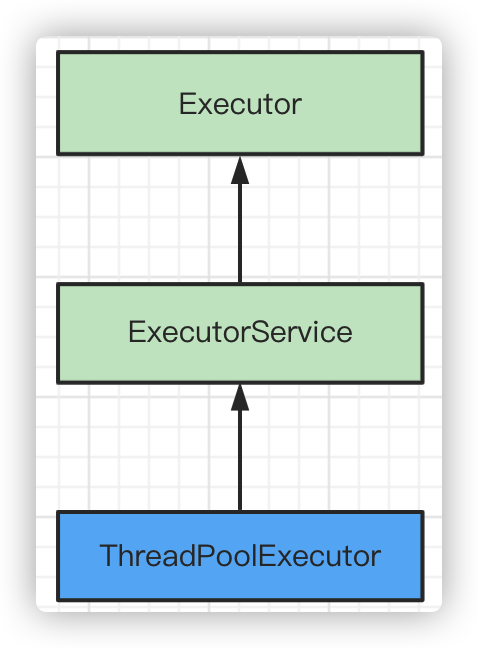 Future: Stores the results to be produced by execution in the future.

Place the program in FutureTask, which executes when the thread starts and stores the results

We create threads in a callable-based manner that works with FutureTask.

Used to process multithreaded requests asynchronously and manage the results of multiple Futures. The principle is to open multiple threads and process multiple future simultaneously.

**Scenario Case: ** Suppose you can provide a service that queries prices of the same kind of product (such as Tmall Taobao Jingdong) on major e-commerce websites and summarizes the display

Use ThreadPoolExecutor to create a thread pool, which must be used in development. See below.

Note: maximumPoolSize in actual development needs to be estimated by itself. Judgment by machine configuration + formula + a lot of pressure measurement

The difference between executor() and submit() of a thread pool

Both open a thread and execute asynchronously. However, submit has a return value execute does not. submit's return value is a Future class, which can get exception information after the FutureTask executes

Tasks that break down summaries are subtasks that are executed by multiple threads. Ultimately, the process of merging the results into summaries is CPU intensive. Note: Subtasks cannot be executed before they are executed. 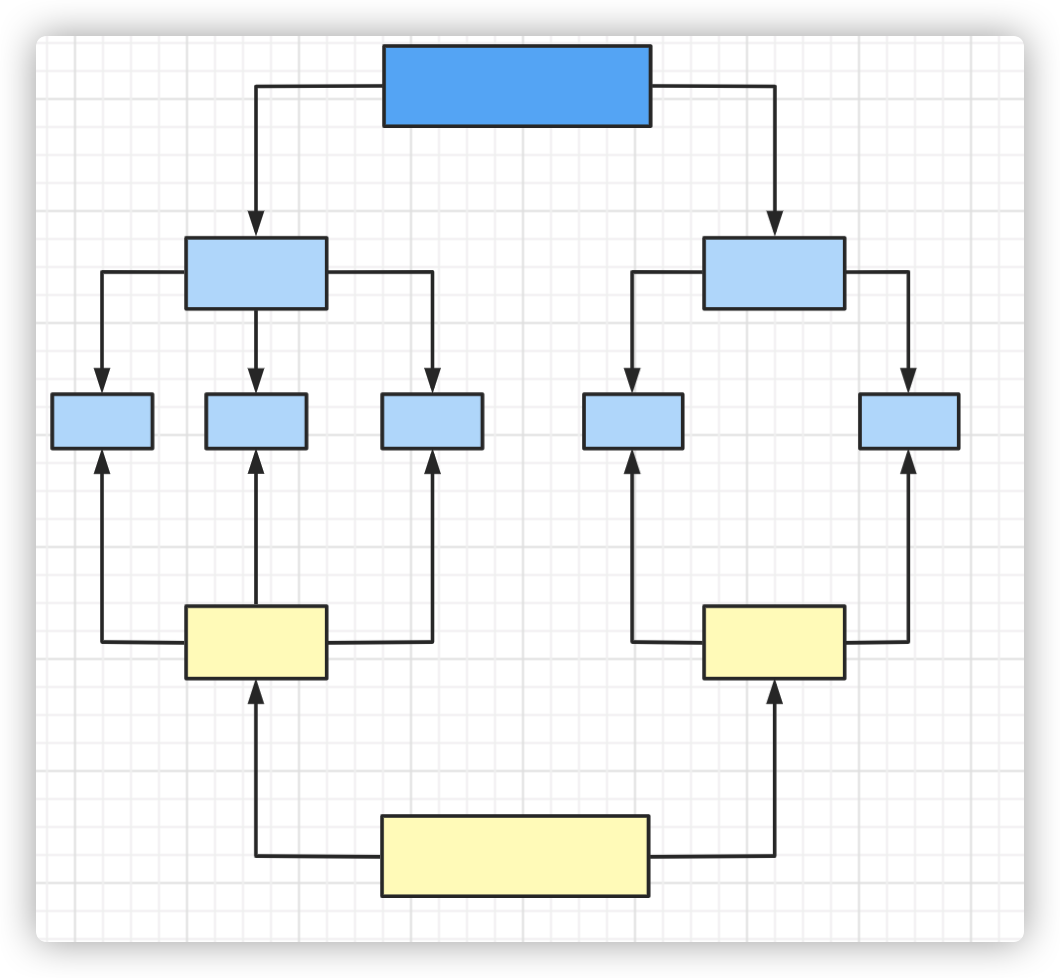 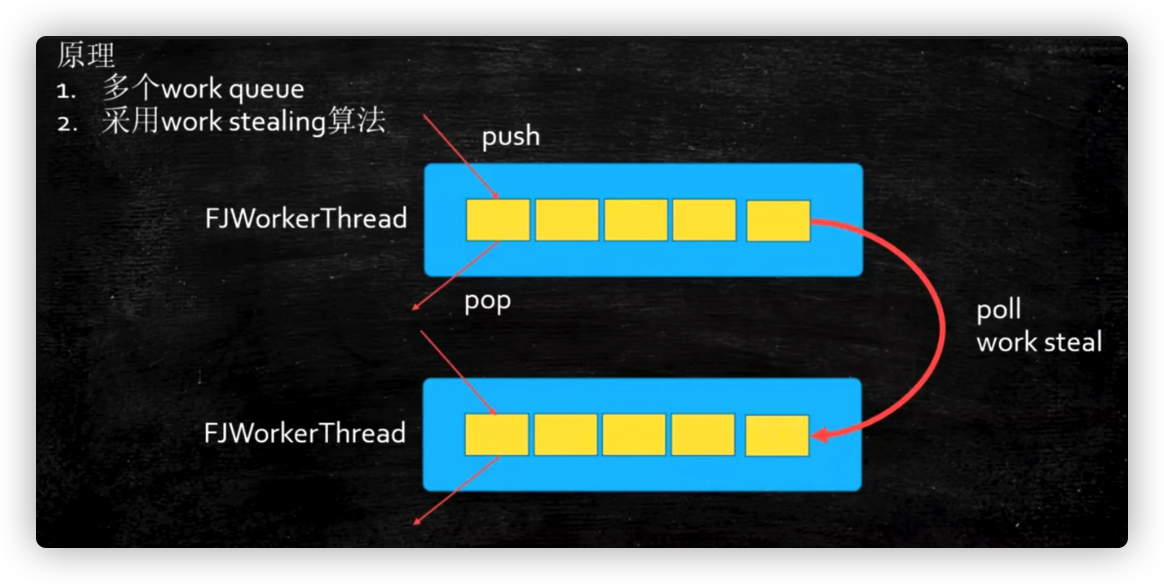 At the bottom of it is new ForkJoinPool, which is designed to provide a more convenient interface for defining parameters, and that's all

RecursiveTask: Recursive Task: Task that can be called recursively after inheritance, with a return value 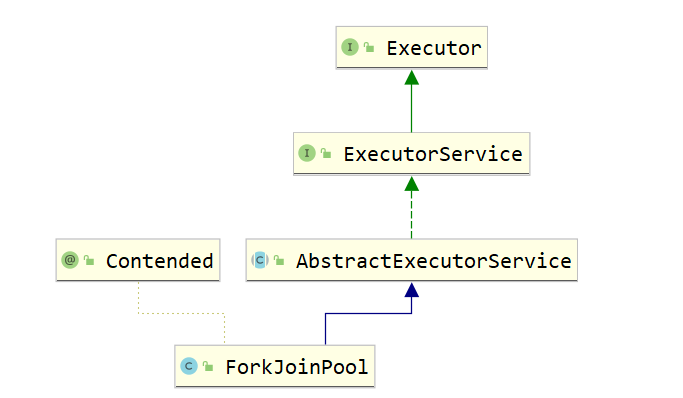 The bottom level of parallel streaming is ForkJoinPool