The data used in this OCR experiment is based on Task 4.3:Word Recognition in icdar2015 incident scene text. This is a word recognition task. Remove some pictures to simplify the difficulty of this experiment.
The data set contains many text areas in natural scene images. The training set in the original data contains 4468 images and the test set contains 2077 images. They are cut out from the original large image according to the bounding box of the text area, and the text in the image is basically in the center of the picture.
The dataset contains folders containing images and corresponding label files, which are divided into train and test. Similar forms such as word_1.png, "join", i.e. word_ 1. The image result of PNG is the English word join.

In order to simplify the recognition difficulty of subsequent experiments, the data set provided roughly filters the vertically arranged images of characters with an aspect ratio > 1.5, so it is slightly different from the original data set of ICDAR2015.

Before the experiment, simply analyze the data to understand the characteristics of the data.
The specific work is: tag character statistics (which characters are there and how many times each character appears), longest tag length statistics, image size analysis, etc. are carried out on the data, and the mapping relationship file lbl2id of character tags is constructed_ map.txt.

1. Statistics of the longest characters of the label

The longest label in the dataset contains 21 characters, which will provide a reference for the setting of time steps when the transformer model is built later.

2. Statistics of characters contained in labels

View all characters that have appeared in the dataset

lbl_cnt_map is a statistical Dictionary of the number of occurrences of characters. It will also be used to establish the mapping relationship between characters and their IDs.
From the statistical results of the data set, the test set contains characters that have not appeared in the training set. The number of such cases is small, so it should not be a problem, so no additional processing is performed on the data set here (but it is necessary to consciously check whether there is difference between the training set and the test set).

3. Construction of mapping dictionary between char and id

Analyze the image width, height and aspect ratio to understand the characteristics of the data

Most of the pictures are long strips lying down, and the maximum aspect ratio is > 8. It can be seen that there are extremely slender pictures.

6.2.3 how to introduce transformer into OCR

Why can transformer solve OCR problems?

The related codes of training framework are implemented in ocr_by_transformer.py file
Let's start to explain the code step by step, mainly including the following parts:

First, import the library to be used later

Then set some basic parameters

Read the mapping dictionary between the character and its id in the image label, which needs to be used for subsequent Dataset creation.

Let's introduce the related contents of Dataset construction. First, it's reasonable to think about how to preprocess images.

Suppose the picture size is [batch_size,3, H i H_i Hi​, W i W_i Wi​]
The size of the characteristic diagram after passing through the network is [batch_size, C f C_f Cf​, H f H_f Hf​, W f W_f Wf​]
Based on the previous analysis of the data set, the pictures are basically horizontal long strips, and the image content is words composed of horizontally arranged characters. Then, the position of the same vertical slice in the picture space basically has only one character, so the vertical resolution does not need to be very large, so take H f = 1 H_f=1 Hf = 1; the horizontal resolution needs to be larger. We need different embedding to encode the characteristics of different characters in the horizontal direction.

Method 1: set a fixed size, resize the image with its aspect ratio, and pad the empty area on the right;
Method 2: directly force the original image to resize to a preset fixed size.
Note: which scheme is better?
Here, the author chose method 1, because the aspect ratio of the picture is roughly proportional to the number of characters of words in the picture. If the aspect ratio of the original picture is maintained during preprocessing, the range of each pixel on the feature map corresponding to the character area on the original image is basically stable, which may have a better prediction effect.
Here's another detail. If you look at the above figure, you will find that each area with width: height = 1:1 is basically distributed with 2-3 characters. Therefore, in actual operation, we did not strictly keep the width height ratio unchanged, but increased the width height ratio by 3 times, that is, first lengthen the width of the original image to 3 times, then maintain the width height ratio and resize the height to 32.
Note: it is suggested to stop and think again. Why is this detail just now?
The purpose of this is to make each character on the picture have at least one pixel on the feature map corresponding to it, rather than one pixel on the wide dimension of the feature map, and encode the information of multiple characters in the original image. I think this will bring unnecessary difficulties to the prediction of transformer.
The resize scheme is determined, W i W_i What is the specific setting of Wi? Combined with the two important indicators we analyzed in the data set earlier, the longest character in the data set label is 21 and the longest aspect ratio is 8.6. We set the final aspect ratio to 24:1. Therefore, we summarize the settings of various parameters:
H i = H f ∗ 32 = 32 H_i=H_f*32=32 Hi​=Hf​∗32=32
W i = 24 ∗ H i = 768 W_i=24*H_i=768 Wi​=24∗Hi​=768
C f = 512 ， H f = 1 ， W f = 24 C_f=512，H_f=1，W_f=24 Cf​=512，Hf​=1，Wf​=24
Image preprocessing

Image enlargement is not the key point. Here, in addition to the above resize scheme, we only perform conventional random color transformation and normalization on the image.
Complete code for Dataset construction

Because we have adjusted the size of the image and padded the image according to the needs, and the padded position does not contain effective information, we need to construct the corresponding encode_mask according to the padding proportion, so that the transformer can ignore this meaningless area during calculation.

The prediction tags used in this experiment are basically the same as those used in machine translation model training, so there is little difference in processing methods.
In label processing, the characters in the label are converted into their corresponding id, and the start character is added at the beginning of the sentence, and the end character is added at the end of the sentence. When the length of sequence_len is not met, padding (0 filling) is performed at the remaining positions.

Generally, in the decoder, we will generate a mask in the form of upper triangular matrix according to the sequence_len of the label. Each line of the mask can control the current time_step. When the decoder is allowed to obtain only the character information before the current step, and it is prohibited to obtain the character information at the future time, which prevents cheating in model training.
The decode_mask is generated through a special function * * make_std_mask() *.
At the same time, it is also necessary to mask the padding part of the label of the decoder, so the decode_mask should also be written as False at the position corresponding to the label being padded.
The generated decode_mask is shown in the following figure:

Build a DataLoader for training

Code through make_ocr_model and OCR_ The encoderdecoder class completes the construction of the model structure.
From make_ ocr_ The model function looks like it first calls Resnet-18 pre trained in pytorch as the backbone to extract image features. It can also be adjusted to other networks according to its own needs, but it needs to focus on the down sampling multiple of the network and the channel of the last layer of feature map_ Num, the parameters of relevant modules need to be adjusted synchronously. After that, OCR_ was called. The encoder decoder completes the construction of the transformer. Finally, the model parameters are initialized.
In OCR_ In the encoderdecoder class, this class is equivalent to an assembly line of basic components of a transformer, including encoder and decoder. For the basic components whose initial parameters already exist, the basic component codes are in the transformer.py file.
Review how the image is constructed as the input of the Transformer after it passes through the backbone:
After the image passes through the backbone, a feature map with dimension [batch_size,512,1,24] will be output. If you don't pay attention to batch_ On the premise of size, each image will get 1 with 512 channels as shown below × 24, as shown in the red box in the figure, the eigenvalues at the same position of different channels are spliced to form a new vector and used as the input of a time step. At this time, the input with dimension [batch_size, 24512] is constructed to meet the input requirements of Transformer. 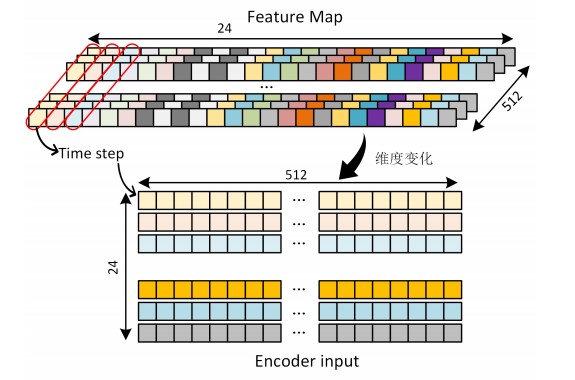 Before model training, we also need to define model evaluation criteria, iterative optimizer, etc. During the training of this experiment, strategies such as label smoothing and network training warm-up are used. [the calling function is in the train_utils.py file]
Label smoothing can convert the original hard label into soft label, so as to increase the fault tolerance of the model and improve the generalization ability of the model. The * * LabelSmoothing() function in the code implements label smoothing, and the relative entropy function is used internally to calculate the loss between the predicted value and the real value.
The warmup strategy can effectively control the learning rate of the optimizer in the process of model training, and automatically realize the control of the model learning rate from small increase to gradual decrease, which helps the model to be more stable during training and realize the rapid convergence of loss. The noamot() * * function in the code realizes the warmup control, and the Adam optimizer is used to realize the automatic adjustment of the number of iterations of the learning rate.

The code of the model training process is as follows. Every 10 epochs are trained for verification. The calculation process of a single epoch is encapsulated in the * * run_epoch() * * function.

The SimpleLossCompute() class implements the loss calculation of transformer output results. When using this class for direct calculation, the class needs to accept (x,y,norm) Three parameters, X is the output result of the decoder, y is the label data, norm is the normalization coefficient of loss, and the number of all valid token s in batch can be used. It can be seen that the construction of all networks of the transformer is being completed here to realize the flow of data calculation flow.
The run_epoch() function completes all the work of epoch training, including data loading, model reasoning, loss calculation and direction propagation, and prints the training process information.