The "risk control ML" series of articles mainly share some of my experiences in financial risk control over the years, including the sharing of risk control modeling, machine learning, big data risk control and other related technologies. Peers are welcome to exchange and join new students to learn and make progress together!

When we first came into contact with these two nouns in the risk control model, the teacher taught us that we can use IV to screen variables. IV (Information Value), whose Chinese name is Information Value, is simply used to measure the prediction ability of variables, and then IV is calculated by WOE. Regardless of the principle, let's draw a conclusion first.

Although this indicator may be easy to use, it is very important to understand its principle, which is very helpful for us to deeply understand variables.

Before we begin to talk about the principle, let's agree on some codes that will be used today.

y_i: number of responding customers in group i

y_{all}: sum of all responding customers

n_i: Number of unresponsive customers in group I

n_{all}: sum of all unresponsive customers

IV_i: IV value of group I

You can see the following table to understand A wave. Variable A is A continuous variable with A value range of v1-vx. Currently, it is divided into m groups according to some box sorting methods. The specific grouping is as follows: 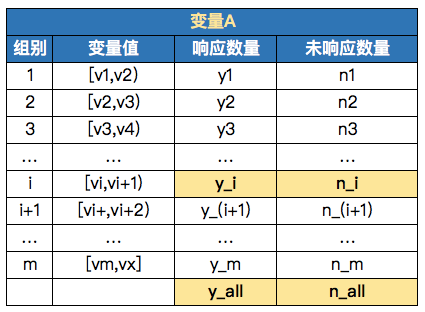 WOE is the abbreviation of weight of evidence. It is a coding form. First of all, we should know that WOE is for category variables, so continuous variables need to be grouped in advance (here is also a good test point. Some people will say that it is box and discrete, and variable optimization can also be started from this point of view).

First, the mathematical calculation formula is given. For the WOE of group i, it can be calculated as follows:

Therefore, WOE mainly reflects the proportion of good and bad in the group and the degree of overall differentiation. The greater the WOE, the greater the difference.

Well, the above theory has also talked about some. Let's take an actual variable to calculate.

There is a customer's age field on our list, so we can use it to calculate the prediction ability of this field for successfully adding friends (responses). We implement it in Excel:

It can be seen that this variable has a strong ability to predict whether we can successfully add to our customers' wechat friends.

The core code is as follows:

So how do we use it, step by step:

The test data set can be obtained by replying 'age' in the background.

Step 2: divide boxes according to the specified threshold 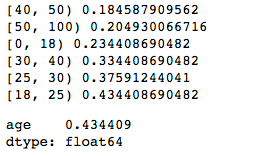 It can be seen that it is completely consistent with the results of our Excel calculation!

Well, the above calculation for a single variable IV is OK. What can you do if there are a bunch of variables that need you to calculate IV? In fact, the principle is very simple, that is, write a cycle. Here, we have written one, which you can refer to. Here are some details that need to be explained.

1) Pay attention to distinguish the types of variables. Numerical variables and category variables should be treated differently.

2) Note whether the number of responses (unresponsive) in a group is zero after grouping. If it is zero, it needs to be handled.

Put the code on, and you can try to run it:

If you want to reproduce the code, you can output 'age' from my public account background to obtain the test set, or play with your current data set, but you have to pay attention to some details and convert the data format. ‍