Node: SHARED and EXCLUSIVE: used to identify whether the node is in SHARED mode or EXCLUSIVE mode

int: waitStatus: identifies the waiting status of the node. There are the following values:

CANCELLED: a value of 1 indicates that the node has been CANCELLED. For example, when tryLock(1000, TimeUnit.MILLISECONDS) is used to obtain a lock, the timeout will be CANCELLED

SIGNAL: a value of - 1 indicates that the thread of the successor node of this node has been suspended through LockSupport.park(). The previous node needs to wake up the thread when releasing the lock or canceling

condition: a value of - 2 indicates that the node is in the condition queue. Generally, it is operated through condition.await(), and then the node is inserted into the tail of condition

PROPAGATE: if the value is - 3, the header node of the sharing mode may be in this state, indicating that it propagates downward. Suppose two threads release the lock at the same time. Through competition, one of them is responsible for waking up the successor node, while the other sets the head node to this state. After the new node wakes up, it wakes up the next node directly according to this state of the head node.

Note that when new Node(), waitStatus is equal to 0 by default.

3, Analysis of obtaining and releasing locks of ReetrantLock

Here we will analyze the source code of the default unfair lock, version jdk1.8.

Unlike synchronized, ReentrantLock does not actively release the lock, so you need to actively call unLock release in the finally block.

Here, it is assumed that four threads A, B, C and d call lock to obtain the lock at the same time, and the tasks performed by each thread after obtaining the lock are very time-consuming.

Since the default is a non fair lock, the lock method of NonfairSync is called, as follows:

Since thread A is the first to request A lock, set the AQS state value to 1 through CAS, indicating that thread A has obtained the lock, and then

If tryAcquire succeeds in obtaining the lock, it returns true; otherwise, it returns false. Let's take a look at addWaiter(Node.EXCLUSIVE). Node.EXCLUSIVE, as mentioned earlier, refers to an exclusive lock. The code is as follows:

Since thread B is the first thread that has not obtained the lock, and both head and tail are null, go to enq(node):

Draw a picture here to show:
Note [1]: since tail == null, note [2] holds;
Note [3]: new an empty node, and then set the empty node to head through cas operation. At this time, the waitStatus value of the head node is 0 (the default value)
Note [4]: let tail point to head, and the effect after execution is as follows: 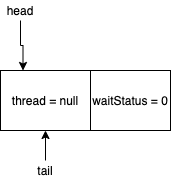 At this time, both head and tail point to an empty node, in which the corresponding thread is null, and waitStatus = 0;
The for loop will go to note [1] again, and t is assigned to tail, so the condition of note [2] is not tenable. Go to note [5], that is, prev of thread B points to t, that is, to tail, as shown in the following figure:

Then go to note [6] through cas operation, let tail point to the node corresponding to thread B.
Note [7] is used to point the next pointer of t to the node, and then return to the node, as follows:

At this point, the addWaiter(Node mode) analysis is completed. Let's talk about acquirequeueueueued (final node, int ARG). The code is as follows:

Note that this is also an infinite loop operation. At this time, thread B is already in the waiting queue:

Note [1]: at this time, the precursor node of node node is head, so tryAcquire is executed. Because thread A performs time-consuming operations and will not release the lock temporarily, the tryAcquire condition in note [2] is not satisfied. Go to note [4].

Next, the precursor node of the node corresponding to thread B is the head node. As mentioned earlier, the value of waitStatus of the head node is 0. All will go to the comment [2], set waitStatus = -1 (SIGNAL = -1) of the head, return false, return to the acquirequeueueueued method, and continue to execute the for loop. Because thread A still does not release the lock, Or go to shouldParkAfterFailedAcquire method. At this time, the waitStatus of pred = signal, which has returned true. Then execute the parkAndCheckInterrupt method in acquirequeueueued, as follows:

This method is very simple. Call LockSupport.park to block thread B.
Above, after execution, the value of waitStatus of head is - 1. As shown below:

At this point, the lock acquisition operation of thread B is completed and blocked. Now it's thread C's turn to request the lock. Is the process the same or finally here

Since thread A did not release the lock, thread C failed to obtain the lock tryAcquire, and then went to addWaiter. At this time, the node corresponding to thread C was inserted into the tail of the waiting queue, as shown in the following figure:

Similarly, the operation of thread D is the same as that of thread C. after the lock acquisition process is completed, see the following figure:

It can be seen from the above analysis that the waitstatus of the non tail node of the waiting queue formed by ReentrantLock = - 1; 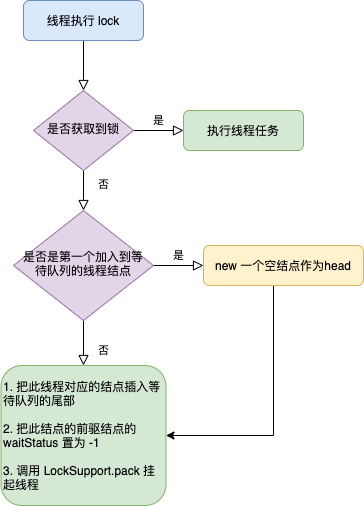