Redis supports cluster since version 3.0. It adopts the hash slot method, which can integrate multiple redis instances to form a cluster, that is, to store data on multiple nodes in the cluster.

Redis cluster is a decentralized structure. In a cluster, the identity of each master is equal. Each node saves data and the status of the whole cluster, and knows the slot that other nodes are responsible for. It also sends heartbeat information regularly, which can sense abnormal nodes in the cluster in a timely manner, and decide whether the node is unavailable by voting. If the number of votes is If more than half of the nodes in the cluster are considered unavailable, it is precisely because of this feature that redis cluster should be deployed with at least three or more nodes.

There are master and slave roles in the cluster. Slots (slots) are allocated between master roles. Slot point numbers are 0-16383 (16384 in total).

By default, each cluster node has two TCP ports listening, one is 6379 (used to listen for access connections of clients), and the other is 16379 (used for node communication between clusters). Note that the firewall needs to release traffic from both ports.

Advantages and disadvantages of RDB

Advantages and disadvantages of AOF

If RDB and AOF exist at the same time, AOF mode is preferred.

1. The environment is as follows: 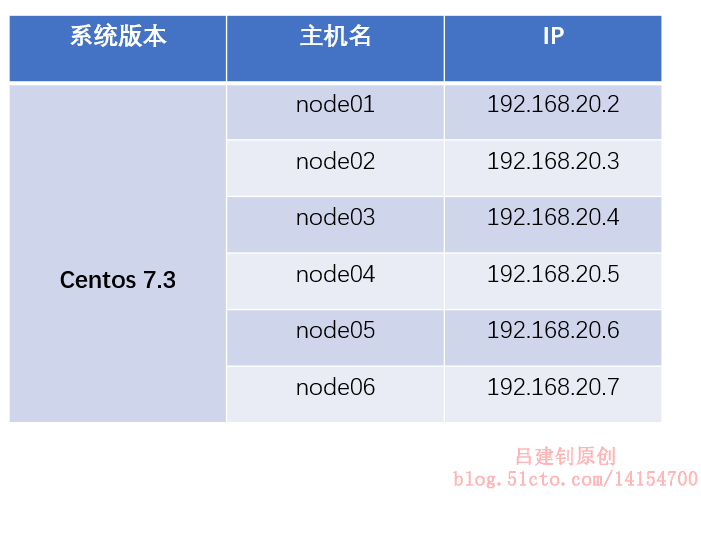 There are six centos servers in the above. Three master servers correspond to one slave (you can also configure multiple Redis instances on one server, but do not use master slave on the same physical server. You can use the cross master slave mode for master-slave replication. The so-called cross is that the master is on node01, but the corresponding slave is on node02, node02, and the slave corresponding to the master is on node03 , and the slave corresponding to node03 is on node01. The advantage of doing this is to avoid the whole cluster crash caused by the physical server's downtime. Here is just a hint, just do your own research.

Before the next configuration, please download The source package I provided (in fact, the version deployed here is redis 4.0, which is a little lower, and some convenient configurations cannot be carried out. Please refer to my article below Deploy Redis 5.0's Bo Wen.

On other node servers, the above configurations are performed in order, except for the host node06, because the configuration of multiple Redis instances of a single host will be shown later on node06.

On node06, I will configure it to run multiple Redis database instances, so the configuration of node06 is not exactly the same as that of the previous five nodes. Please configure it carefully.

The information returned from the above view of Redis port monitoring is as follows:

4. The host node01 is installed and configured with the running environment of ruby to facilitate the management of Redis cluster

5. Configure each node in the cluster

After configuration, you can view the node information of the cluster again. You will find that the master and slave correspond to each other, as follows:

At this point, the cluster can read and write data normally, as follows:

The information returned by the above command is as follows: 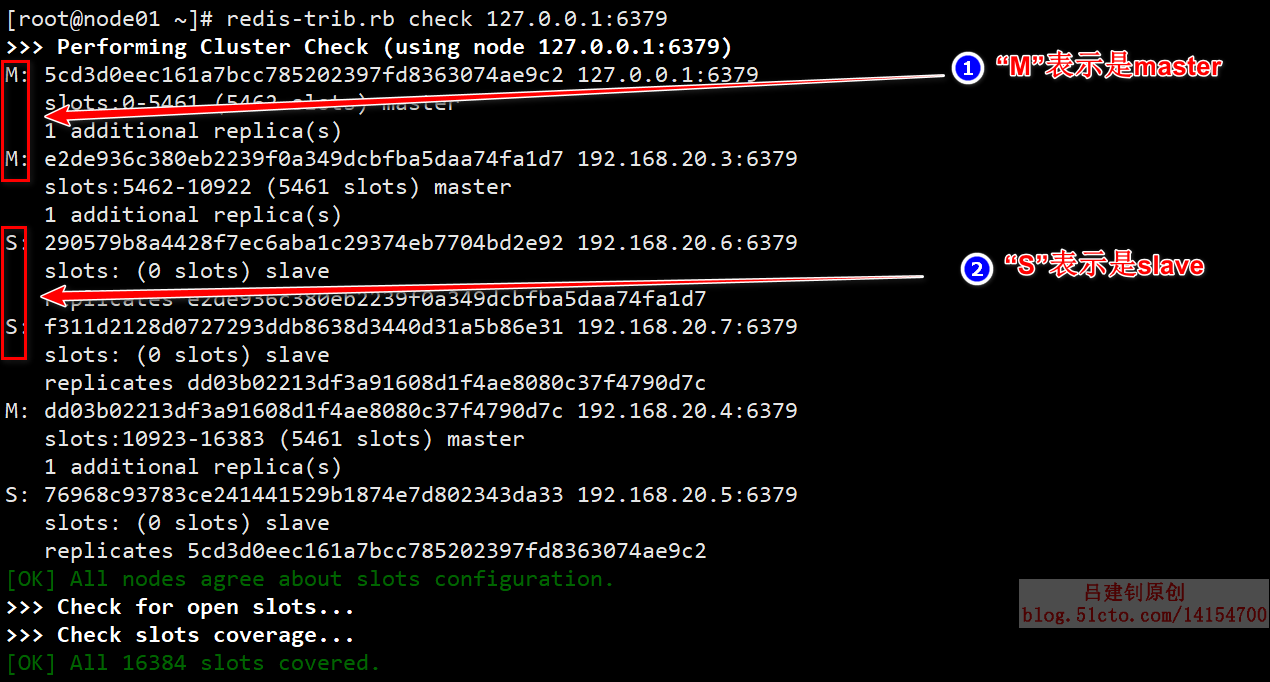 The returned prompt message is as follows to indicate success: 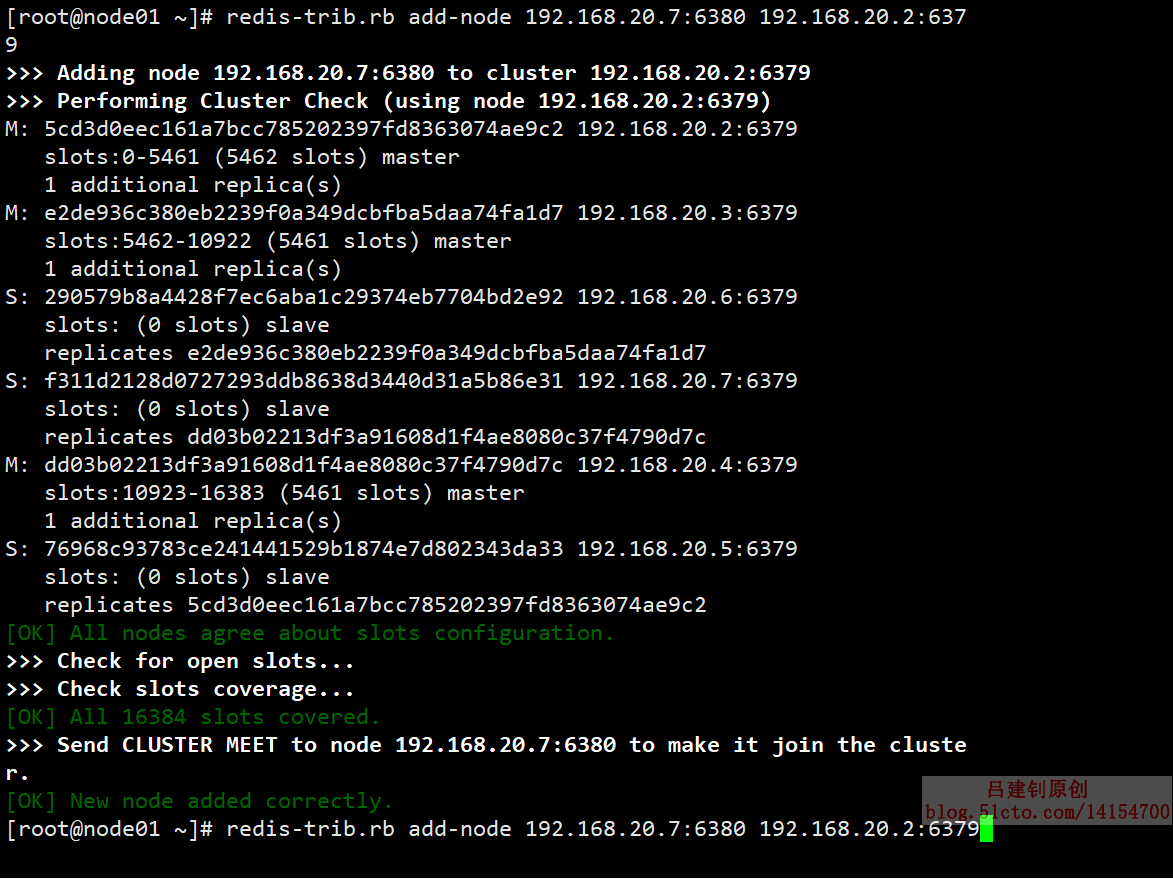 2) after adding nodes, corresponding slot points need to be allocated

At this point, the new node is added and the corresponding slot points are allocated, but... There is no slave node, so next, assign a slave node to the newly added master.

There are two ways to allocate slave nodes: one is to automatically bind to the master without the slave node, and the other is to directly specify the master to which the slave node is bound. Write down both ways here.

Here is an example of removing the 6380 instance on node06.

At this point, the 6380 instance has been completely removed from the cluster, and the slave corresponding to it has also become the slave of node02 along with the transfer of slot points to node02. Now look at the cluster information. The master of node02 should have three slaves.