In the multithreaded environment, in order to ensure that a code block can only be accessed by one thread at a time, we can generally use the synchronized syntax and ReetrantLock in Java to ensure that this is actually the way of local locking. But now companies are all popular distributed architecture, in the distributed environment, how to ensure that the threads of different nodes execute synchronously? In fact, for distributed scenarios, we can use distributed locks, which is a way to control the mutual exclusive access of shared resources between distributed systems.
For example, in a distributed system, multiple services are deployed on multiple machines. When a client user initiates a data insertion request, if there is no guarantee of distributed locking mechanism, multiple services on multiple machines may be inserted concurrently, resulting in repeated data insertion. For some businesses that do not allow redundant data, this will cause problems Question. The purpose of distributed lock mechanism is to solve such problems and ensure mutually exclusive access to shared resources among multiple services. If one service preempts the distributed lock and other services fail to acquire the lock, no subsequent operations will be carried out. The general meaning is as follows 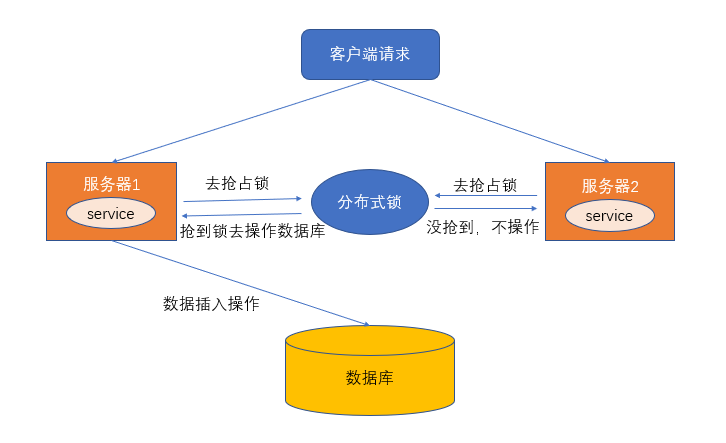 We generally implement distributed locks in the following ways:

In fact, there is a problem with the above steps. setnx and expire are two separate steps. They are not atomic. If the first instruction is executed and the application is abnormal or restarted, the lock will not expire.
One improvement is to use Lua script to ensure atomicity (including setnx and expire instructions)

Value must be unique. We can use UUID to do this. Set random string to ensure uniqueness. Why guarantee uniqueness? If value is not a random string but a fixed value, the following problems may exist:

1. Client 1 obtains the lock successfully
2. Client 1 has been blocked for too long on an operation
3. The set key expires, and the lock is released automatically
4. Client 2 obtains the lock corresponding to the same resource
5. Client 1 recovers from blocking. Because the value value is the same, the lock held by client 2 will be released when the lock release operation is performed, which will cause problems

So in general, we need to verify the value when releasing the lock

Here, Lua script is used to ensure atomicity as much as possible.
Use the set key value [EX seconds][PX milliseconds][NX|XX] Command It seems OK. In fact, there will be problems in Redis cluster. For example, client A has obtained the lock on the master node of Redis, but the locked key has not been synchronized to the slave node. If the master fails and fails over, A slave node is upgraded to the master node, and client B can also obtain the lock of the same key, but client A has also obtained the lock Cause multiple clients to get locks.
So there are other solutions for Redis cluster

Suppose there are 5 independent Redis nodes (note that the nodes here can be 5 Redis single master instances or 5 Redis Cluster clusters, but they are not cluster clusters with 5 master nodes):

B. Using Redisson, the code is as follows (similar to using ReentrantLock)

For the implementation of the Redlock algorithm, we can use the Redisson Redlock in Redisson, and the specific details can be Refer to the big guy's article

Next, use the combination of SpringBoot + Jedis + AOP to implement a simple distributed lock.