Recommend a Shell force artifact, which has been open source! Netizen: really fragrant...

Today, I want to introduce a productivity tool (force artifact) Shell. It is called NuShell. It is written in Rust. While improving security, the Bug rate is also reduced. NuShell focuses on achieving the following goals:

At present, NuShell has marked 13.9K on Github and accumulated 631 branches (details: github.com/nushell/nushell)

The easiest and quickest way to run NuShell on Linux / macOS is to install it from crites.io or download the pre built binaries from our Github release page.

The ideal installation method for any Linux distribution is the binary method. We will use the curl tool to get the latest version, download and extract the file to get the Nushell binary.

Copy binaries to your PATH:

Nushell will look for the plug-in in your PATH at startup. Although nushell has some functionality without them, to get full functionality, you need to copy them to your PATH in order to load them.

Fedora users can use COPR repo to install Nushell:

For binary installation methods, use brew:

Run the following command on the macOS system to download the latest version of Nushell:

Copy nu binaries to your PATH:

If you are a windows user, it is recommended that you run the experience directly in Docker. A few commands are completed. The commands are as follows: 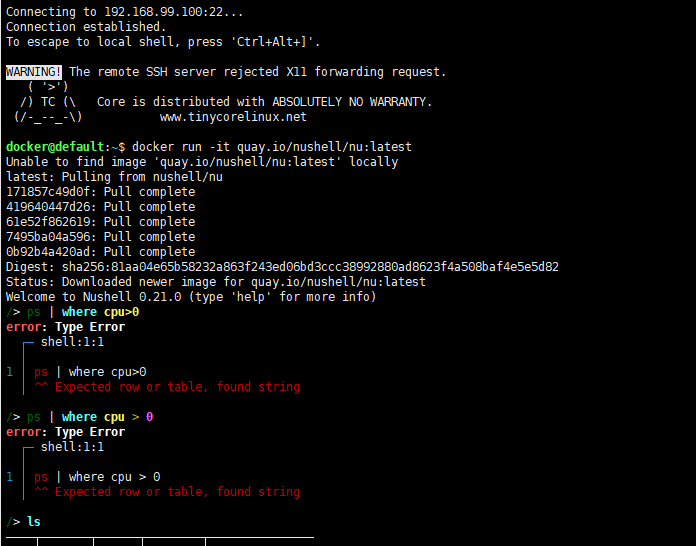 Test how the ls command works in Nushell:

Hello, I'm Tan Qingbo, the factory director. I'm a doctoral student in the computer department of Harbin Institute of technology. I used to be a learning slag and now a learning bully. I've won various programming awards.

He has studied for 20 years, from rural areas to doctor C9, with a sideline income of more than 1 million, Click the blue word to see my growth path.

At the same time, I also know the blogger: Tan Qingbo, who shares the cognition of high-quality programmers, learning materials and technical dry goods every day. Welcome to watch.