Next, we will start to make a DApp. Although it is a very simple voting application, it will contain a complete workflow and interaction page. The main steps to build this application are as follows:

The way we communicate with blockchain is through RPC (Remote Procedure Call). Web3js is a JavaScript library, which abstracts all RPC calls so that you can interact with blockchain through JavaScript. Another advantage is that web3js allows you to build great web applications using your favorite JavaScript framework.

Here is the Linux based installation guide. This requires us to install nodejs and npm in advance, and then use npm to install Ganache cli, web3 and solc. Then we can proceed to the next step of the project.

If the installation is successful, run the command node_modules /. Bin / Ganache cli, and you should be able to see the output shown in the figure below. 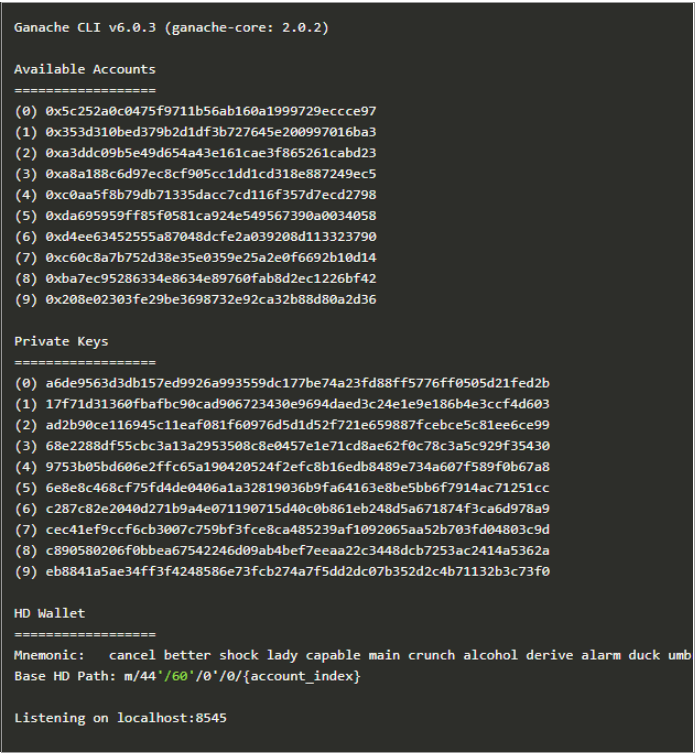 To facilitate testing, ganache will create 10 accounts by default, each with 100 ethers.. You need to use one of these accounts to create transactions, send and receive ethers.

We will write a contract called voiting, which has the following contents:

We must specify which version of compiler the code will compile

Line 3. mapping is equivalent to an associative array or dictionary, and is a key value pair. The key for mapping votesReceived is the name of the candidate and is of type bytes32. The value of mapping is an unassigned integer and stores the number of votes.

Line 4. In many programming languages (for example, dictionaries in java and python < hashtable inherits from dictionary >), all candidate names can be obtained only through votesReceived.keys. However, there is no such method in solidity, so we have to manage a candidate array, candidelist, separately.

Note that votesReceived[key] has a default value of 0, so you don't need to initialize it to 0, just add 1.

You will also notice that each function has a visibility specifier (such as public in this case). This means that functions can be called from outside the contract. If you don't want anyone else to call this function, you can make it private. If you do not specify visibility, the compiler throws a warning. Recently, the solidity compiler has made some improvements. If the user forgets to mark the private function, the compiler will catch this problem.

You will also see a modifier view on some functions. It is often used to tell the compiler that a function is read-only (that is, when called, the blockchain state does not update).

Next, we will use the solc library installed in the previous section to compile the code. If you remember, we mentioned before that web3js is a library that allows you to interact with blockchain through RPC. We will use this library to deploy the contract in the node console and interact with the blockchain.

First, run the node in the terminal to enter the node console, initialize the web3 object, and query the blockchain to obtain all accounts.

When you successfully compile the contract and print the compiledCode object (you can see the content by entering compiledCode directly in the node console), you will notice that there are two important fields, which are very important. You must understand:

However, before using any framework, it's helpful to have an in-depth understanding of how it works, because the framework abstracts that out.

Let's continue with the course and now deploy the contract to the blockchain. To do this, you must first create a contract object, the VotingContract, by passing in the abi definition. This object is then used to deploy and initialize the contract on the chain.

VotingContract.new deploy the contract to the blockchain.
The first parameter is an array of candidates who will compete for the election, which is easy to understand. Let's look at what's in the second parameter:

There are thousands of contracts on the blockchain. So, how do you identify that your contract is on the chain? The answer is to find the address of the deployed contract. deployedContract.address. When you need to interact with the contract, you need the deployment address and the abi definition we talked about earlier.

BigNumber values are stored in the form of symbols, exponents, and coefficients in decimal floating-point format. s is the sign sign sign, i.e. positive and negative; E is the exponent index, which indicates that there are several zeros after the highest bit; c is the coefficient of coefficient, which is the actual effective number; the input parameter of BigNumber constructor is limited to 14 bits, so the coefficient represents an array truncated from the back to the front, once for 14 bits. Vote for the candidates and view the number of votes to continue the course, call the voteForCandidate and totalVotesFor methods in your node console and view the results.

Each time you vote for a candidate, you get a transaction id: for example: '0xdedc7ae544c3dde74ab5a0b0742c5a51b5240603d31074f5b75c0ebc786bf53'. The transaction id is the evidence of the transaction. You can reference the transaction at any time in the future. The deal is immutable. For blockchain like Ethereum, immutability is one of its main characteristics. In the next chapter, we will use this feature to build applications.

So far, most of the work has been completed. What we need to do is to create a simple HTML with the name of the candidate and call the voting command (we have tried it in the nodejs console). You can find HTML code and js code on the right. Put them in the chapter1 directory and open index.html in the browser.

If all goes well, you should be able to enter the name of the candidate in the text box, and then the number of votes should be increased by 1.
Note: due to network reasons, web3.js may not be available and can be downloaded to local import.

If you can see the page, vote for the candidates, and see the number of votes increase, you have successfully created the first contract. Congratulations! All votes will be saved on the blockchain and are immutable. Anyone can independently verify how many votes each candidate gets. Of course, all our work is done in a simulated block chain. In the next lesson, we will deploy this contract to the real public chain. In Part 2, we will deploy contracts to the public chain called Ropsten testnet, and learn how to use the truffle framework to build contracts and manage dapp s.

To summarize, here's what you've done so far: