It extends ThreadPoolExecutor, which indicates that it is also a thread pool and implements ScheduledExecutorService. This interface defines the methods owned by the timer

The commonly used sheldule, fixedRate and fixedDelay are stated in advance here

Second, what is the relationship between ScheduledExecutorService and thread pool

This function mainly does three things 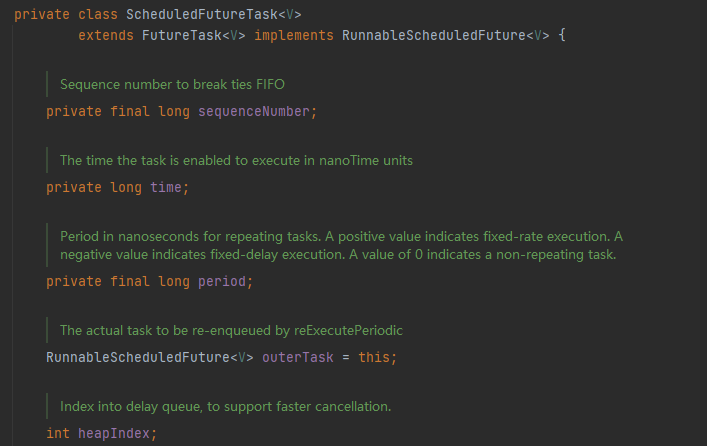 The sequenceNumber task is incremented when it is created. If the execution time of two tasks is the same, you can judge which task is executed first according to this variable

② The decorateTask method is implemented, which is mainly used as an extension point to allow users to modify and replace tasks

③ Put the task into a queue through delayedExecute, and ensure that at least one thread starts executing through the ensueprestart method. Ensueprestart is a thread pool method, which ensures that threads can start to execute tasks. The principle of thread pool will be analyzed in the online process pool article

Here, the task is encapsulated into a task and placed in the queue, and the thread is started to execute.

Third, how does it implement periodic calls

Through the above, we put the task in the queue and start the Thread to execute. How does it execute? We know that when starting a task with Thread, the task can implement the Runnable interface, and then execute its run. We said that the encapsulated ScheduledFutureTask also implements the Runnable interface, so when the Thread is executing, Run will also be executed. Let's look at overriding the run method in ScheduledFutureTask

② If it is a one-time task, execute ScheduledFutureTask.super.run(). When this method is executed, run in futuretask will be executed. It calls the tasks we write to perform, which is understood as performing our own tasks.

③ If it is a periodic task, execute ScheduledFutureTask.super.runAndReset() and get the next execution time. Let's first see what runAndReset is. It is also a method in FutrueTask. After executing this method, it will be reset to the initial state.

setNextRunTime() to set the waiting time for the next execution of our task, which reflects the difference between the execution cycles of fixedRate and fixedDelay.

IV. how to obtain the tasks to be performed

When calling take, how does it block the thread and wake it up