Compare the following two figures to see which style of code you are writing now? Then which coding style do you prefer? 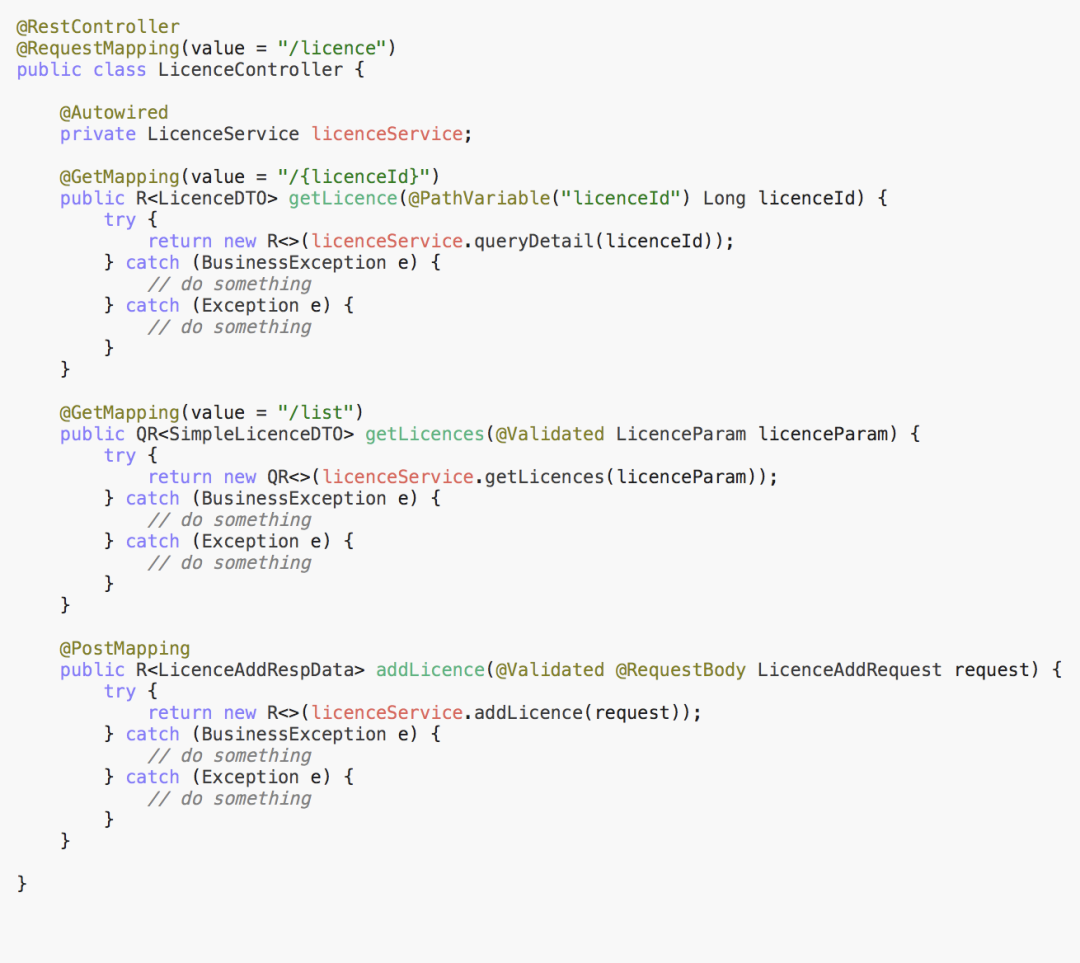 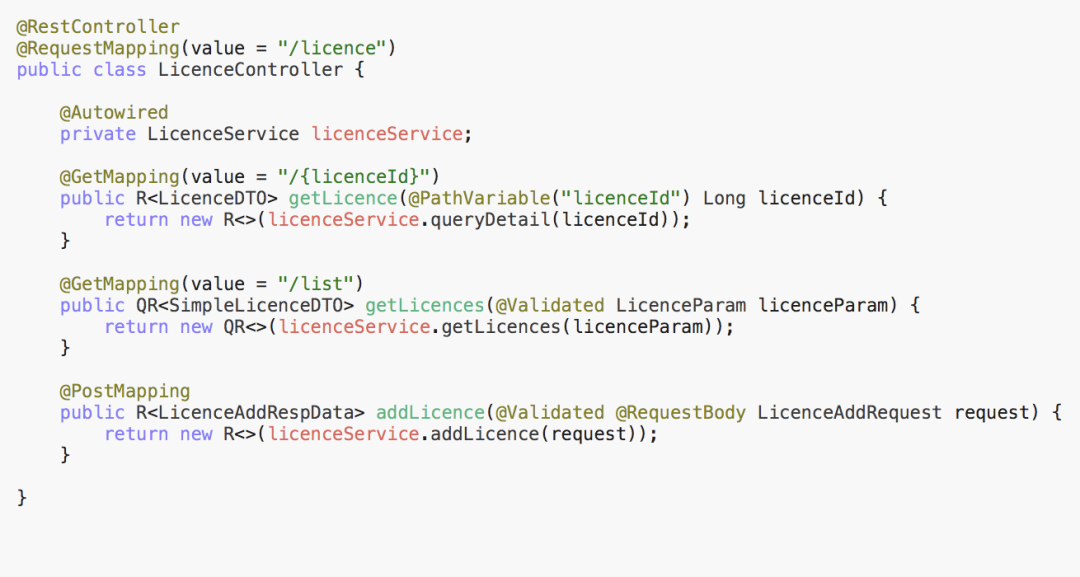 The above example is only in the Controller layer. If it is in the Service layer, there may be more try catch code blocks. This will seriously affect the readability and aesthetics of the code.

So if it's me, I will definitely prefer the second one. I can focus more on the development of business code, and the code will become more concise.

So the question is, how to handle all kinds of exceptions gracefully?

What is unified exception handling

For the function of these annotations, I won't elaborate here. If you don't know about them, you can refer to the spring 3.2 new annotation @ ControllerAdvice. Let's have an idea first. Or WeChat official account: Java technology stack, back in the background: spring, can get my N Spring tutorial, dry cargo.

Of course, you may say, then define a base class similar to BaseController, so that the total row.

It's true, but it's not perfect, because code like this is intrusive and coupled. Simple Controller, why do I have to inherit such a class? In case I already inherit other base classes. Everyone knows that Java can only inherit one class.

With the help of this annotation, we can realize: in an independent place, such as a single class, define a set of handling mechanisms for various exceptions, and then add the annotation @ ControllerAdvice to the signature of the class to uniformly handle different exceptions in different stages. This is the principle of unified exception handling.

Note that the above exceptions are classified by stages, which can be roughly divided into: exceptions before entering the Controller and Service layer exceptions. For details, please refer to the following figure:

You must be familiar with assert, such as the Spring family's org.springframework.util.Assert is often used when we write test cases. Using assertions can make us have a non general silky feeling when coding, such as:

Do you feel that the first way to judge non empty writing is elegant? The second way is to write relatively ugly if {...} code blocks. So amazing Assert.notNull() what has been done behind it? Here are some source codes of assert:

As you can see, Assert is actually to help us encapsulate if {...}. Isn't it amazing. Although very simple, it is undeniable that the coding experience has improved at least one level. So can we imitate org.springframework.util.Assert, also write an assertion class, but the exception thrown after the assertion fails is not the built-in exception of IllegalArgumentException, but the exception defined by ourselves. Let's try it.

The above Assert assertion method is defined using the default method of the interface. Then, it is found that when the assertion fails, the exception thrown is not a specific exception, but provided by 2 newException interface methods.

See here, you may have such a question. According to the above statement, if there are not many exceptions, you have to define the same amount of assertion classes and exception classes. This is obviously anti-human, which is not brilliant. Don't worry. Listen to me carefully.

There are two attributes of the custom exception BaseException, namely code and message. Do you think of any class that will define these two attributes? Yes, enumeration classes. Let's see how I combine Enum and Assert. I'm sure I'll give you a glimpse. As follows:

See here, do you have a bright feeling? There are two enumeration instances defined in the code example: BAD_LICENCE_TYPE,LICENCE_NOT_FOUND, corresponding to badlicensetypexception and licensenotfoundexception.

As you can see, the above exceptions are divided into several categories, but in fact there are only two categories. One is ServletException and ServiceException. Remember the classification by stages mentioned above, which corresponds to the exception before entering the Controller and the Service layer exception. Then ServiceException is divided into custom exception and unknown exception. The corresponding relationship is as follows:

Next, we give a detailed description of these exception handlers.

Before an http request arrives at the Controller, a series of verifications will be made between the requested information and the target Controller information. Here is a brief introduction:

NoHandlerFoundException: first, check whether there is a corresponding controller according to the request Url. If not, the exception will be thrown, which is a very familiar 404 exception;

MissingServletRequestParameterException: missing request parameter. For example, if the parameter @ requestparam ("licenseid") string licenseid is defined, but the parameter is not carried when the request is initiated, the exception will be thrown;

Typemissmachexception: parameter type matching failed. For example, if the receive parameter is Long, but the value passed in is a string, the type conversion will fail, and the exception will be thrown;

HttpMessageNotReadableException: in contrast to the above example of HttpMediaTypeNotSupportedException, the request header carries "content type: application / json; charset = UTF-8", but the receive parameter does not add the annotation @ RequestBody, or the json string carried by the request body fails to be deserialized into pojo, which will also throw the exception;

HttpMessageNotWritableException: if the returned pojo fails to be sequenced into json, throw the exception;

Recommended reading: Can you hold on to 10 questions about serialization?

Parameter verification is abnormal, which will be explained in detail later.

Parameter verification is abnormal, which will be explained in detail later.

Handle all unknown exceptions, such as those that fail to operate the database.

As mentioned above, when the request does not match the controller, a NoHandlerFoundException exception exception will be thrown, but this is not the case by default. By default, a page similar to the following will appear:

How does this page appear? In fact, when 404 occurs, the default is not to throw exceptions, but to forward to the / error controller. spring also provides a default error controller, as follows: So, how to make 404 throw an exception, just add the following configuration in the properties file:

In this way, it can be captured in the exception handler, and then the front end can jump to the 404 page as soon as it catches a specific status code

Catch the exception corresponding to 404

First, define a BaseResponse as the base class of all returned results;

Then define a common return result class, CommonResponse, which inherits BaseResponse and has more field data;

In order to distinguish between success and failure return results, an ErrorResponse is defined

Finally, there is a common return result, that is, the returned data has paging information. Because this interface is quite common, it is necessary to define a separate return result class, QueryDataResponse, which inherits from the CommonResponse. Only the type of data field is limited to QueryDdata, and the corresponding fields of paging information are defined in QueryDdata, namely totalCount, pageNo pageSize,records.

Among them, CommonResponse and QueryDataResponse are the only common ones, but the names are too long for thieves. Why not define two super simple classes to replace them? So r and QR are born. In the future, when you return the result, you only need to write as follows: new R < > (data), new QR < > (querydata).

Because this set of unified exception handling can be said to be universal, all can be designed into a common package, and each new project / module only needs to introduce this package in the future. So in order to verify, you need to create a new project and introduce the common package.

Here is the main source code for verification:

PS: the DAO framework used here is mybatis plus. At startup, the automatically inserted data is:

Verification is not empty 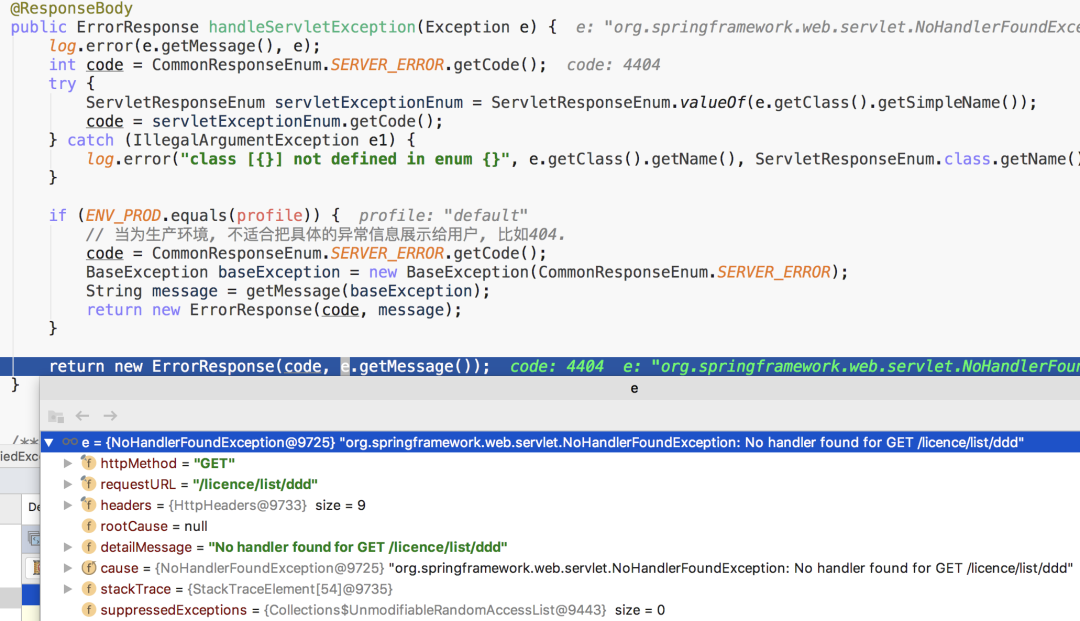 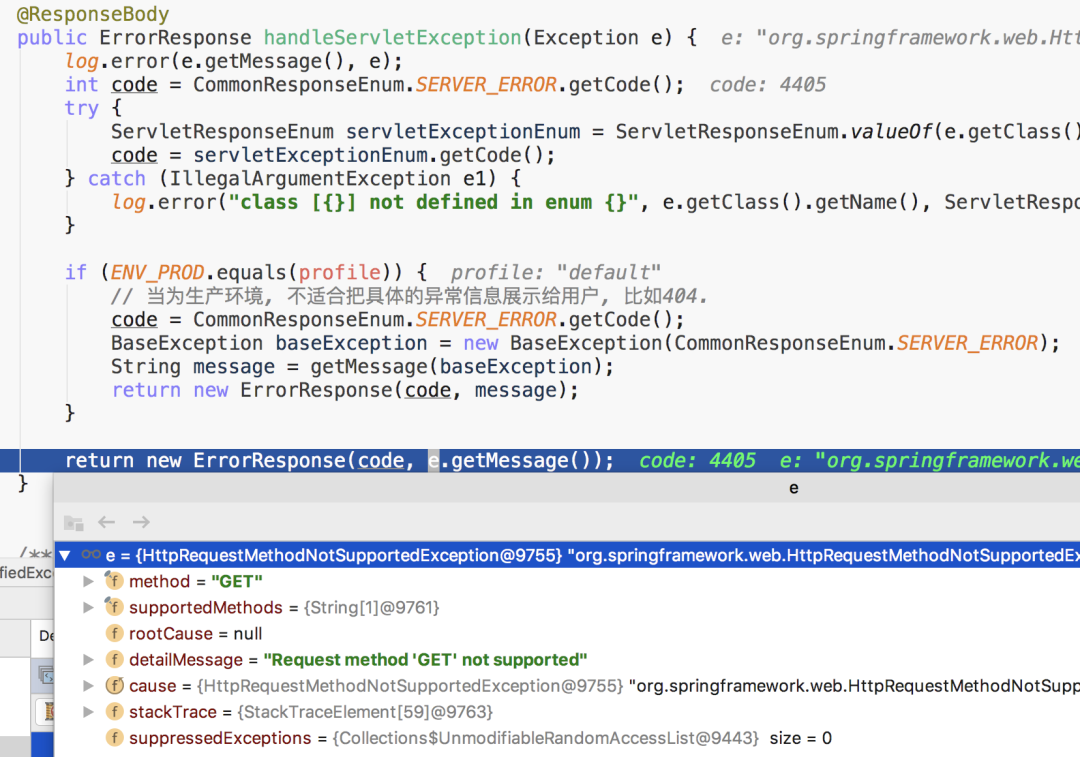 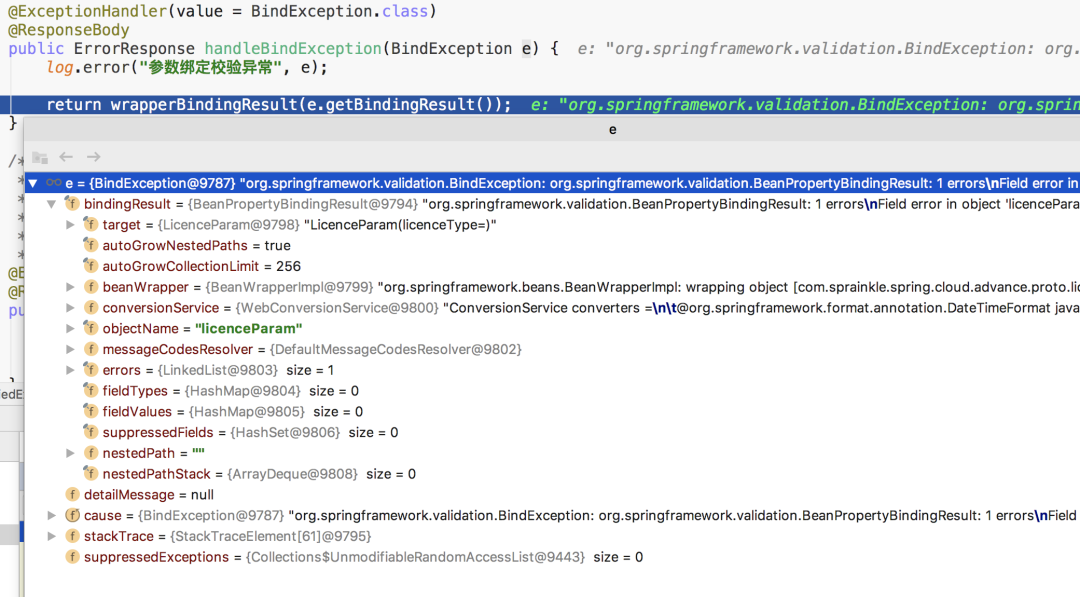 Request url is the result 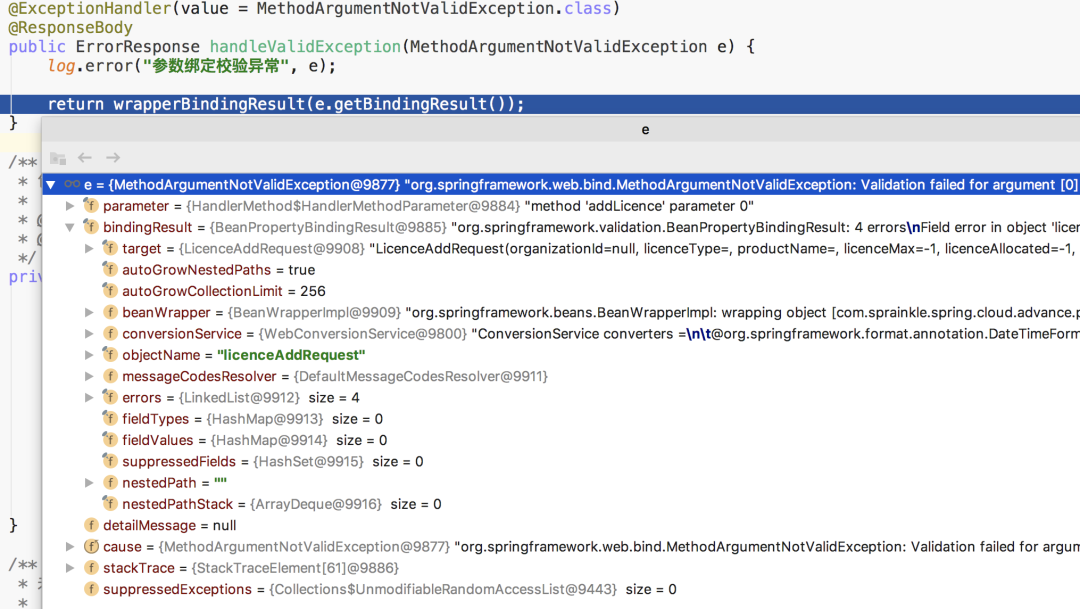 Suppose we add a new field test to the license, but do not modify the database table structure, and then access: http://localhost:10000/licence/1.

As you can see, all exceptions of the test can be caught and returned in the form of code and message. For each project / module, when defining a business exception, you only need to define an enumeration class, then implement the interface BusinessExceptionAssert, and finally define the corresponding enumeration instance for each business exception instead of defining many exception classes. It is also convenient to use, similar to assertions.

You can modify the current environment in the following ways:

With the combination of assertions and enumeration classes, and with unified exception handling, most of the exceptions can be caught.

Finally, it is concluded that the overall abnormality belongs to the topic of senior students' long-term discussion. I hope that this mobile phone project can give you some guidance in learning. We will revise it according to the actual situation.

Recommend to my blog to read more: