It is also inevitable that we may encounter a vulnerability that the planner claims to support but in fact only supports syntax parsing... 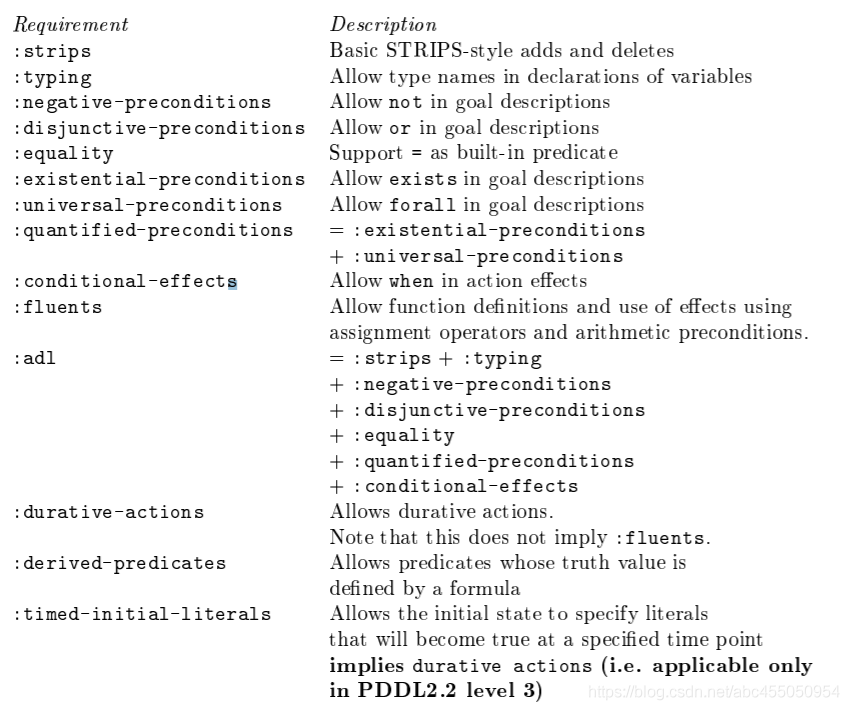 Here are all the requirements from PDDL to PDDL 3.0 and a brief introduction

Allows you to use the basic add and remove effects specified in strings.

Allow object typing. Typing is similar to classes and subclasses in object-oriented programming

Allow preferences to be used in problem definitions (soft goals).

Allow durative action to be used in domain definitions. Continuous action refers to an action with completion duration.

Inequalities are allowed to represent duration. We can express that an action has a duration range using inequality, rather than expressing that the action has a fixed length of time.

Allows continuous effects on numbers in continuous action. Since the persistence operation takes some time, we can model changes in values as a function of time. In fact, it supports this instability. Linear function is relatively easy for planners, but nonlinear effect is still a research field.

Allow derived predicates in the realm

Allow or objectives and prerequisites

when is allowed to express action effects. Basically, if something is true, this effect should also be applied.

Allow action extensions. This allows you to define the effects of variant conditions and actions. In essence, we can define a MOVE action to describe a person's movement, but include different extensions to describe the movement of aircraft, train, car or walking. This has become redundant because we only express multiple actions, such as MOVE-BY-PLANE and MOVE-BY-TRAIN.

Allows you to mark the extensions described in Action Expansions so that you can distinguish the sub actions selected by the scheduler. For example, if we define what an move uses to move simultaneous interpreting modes, we may want to know exactly what patterns the tags use. This requirement implies the existence of requirements, so: Action Expansions is equivalent to (: Requirements: Action Expansions: DAG expansions)

See the axiom section in the PDDL 1.2 domain reference

In the plan, it is assumed that all unknown values are false. That is, if we don't know the value of the predicate, we think it is false. This is called the "closed world" hypothesis. This requirement changes the planner's assumption of "open world". That is, unknown values are not necessarily wrong. This is rarely supported by modern planners and is usually a sign of plan execution rather than a requirement in the domain.

Please note that not every requirements planner needs to be supported. Different planners have different "strengths" and their supported syntax.

More detailed or specific requirements can be planning.wiki View in.