It is very convenient to write scripts in Python, but it needs a specific Python environment to run. Therefore, if you want to run it on other computers, there will be many problems. Even if Python has been installed, the version may vary greatly, and the related dependency libraries are not installed, so it can not run normally. Is there a tool that can package our code with dependency libraries and compiler environments? The answer is yes, pyininstaller is a good tool. You can package your code into exe file with one click. Let's talk about how to use pyinstaller.

The installation process is very simple, running on the command line:

I wrote a simple code as an example. To demonstrate the packaging process more clearly, I wrote the main() function in a separate file and introduced mylib.py as a library.

You only need to run it on the command line:

Yes. You will see the following output:

You will see the following files in the current folder:

The dist folder is the generated exe file.

But the focus of this article is not on how to use pyinstaller. At this time, I was thinking, is such a simple packaging process safe? Will the packaged exe file be easily decompiled?

After consulting relevant materials, it is found that it is indeed possible.

The tool we used in the first step is pyinstxtrator.py, which can unpack the exe file generated by pyinstaller into pyc file.

Then copy this file to the same level directory of the exe to be unpacked, and run the following command:

We also notice that there is a pyz-00.pyz'extracted folder in this directory, which is full of imported dependency libraries. Of course, our own mylib.py is also in it, which is also the object we decompiled.

Find the pyc file, and then decrypt it. pyc is actually a cache file generated during the execution of python program. We will also see it when running python code directly. Decompilation in this format is relatively simple. There are many tools on the Internet, even many online tools. For convenience, I used an online tool here. Enclosed link A kind of

But if we upload the pyc file we found directly, we will find that it cannot be decompiled. Why? We use the hex editor (you can search online, I use wxMEdit here) to open this file, and compare it with the pyc file generated by running the py file directly before.

Let me take a look at the difference between main.pyc. On the left is our unpacking, and on the right is the running generation.

The only difference is that the first 16 bytes (called magic number for python version and compile time) are missing. Can we add it and parse it normally? It's true, but what if there's no original pyc file? Let's look in the xx.exe extracted folder again. We will find a file called struct. Let's add suffix. pyc decompilation to it. It is found that the following content has been decompiled successfully:

This shows that its magic number is correct, so we just need to copy its first 16 bytes, right? Let's try again. It's done! The contents of main.py have been decompiled successfully.

In the same way, the following can also decompile the contents of mylib.py and other dependent libraries, but it is worth noting that many online tutorials do not mention the difference between the number of bytes missing from the pyc file of the dependent library and the main program!!!

We found that it is not missing 16 bytes, but 4 bytes in the middle!!!

Then, we only need to overwrite the first 12 bytes of mylib.pyc with the 16 bytes of struct header.

**Decompiled successfully! **However, Chinese characters are parsed into Unicode code and can be converted using the corresponding tools.

You can see that the exe packaged by pyinstaller can be decompiled easily. Is there a way to encrypt and package? In fact, pyinstaller itself supports encryption. Let's talk about how to package encryption. (this is also a sinkhole...)

In fact, as long as you add a key parameter to the package, you can encrypt it,

However, you need to rely on the pycrypto package, which is usually not included in python. So we need to install it manually.

The original installation process should be simple, and it can be installed through pip.

I found many solutions on the Internet that didn't work. Finally, I found an answer on StackOverflow, which solved the problem perfectly. Original answer address: https://stackoverflow.com/a/46921479/12954728

The solution is as follows, provided that Visual studio is installed on your computer

2. Use pyinstaller to encrypt and package

Now you can encrypt the package by executing the following command. After the key is the key, you can enter it at will.

Then let's test whether the encrypted package exe can be decompiled.

This time, I output a long string of errors. It seems that they are indeed encrypted.

Let's look at the folder again. 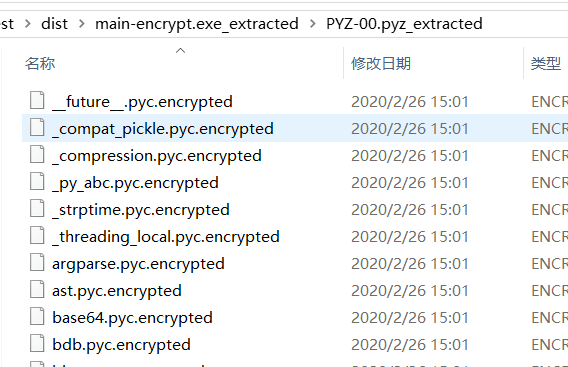 However, the main file in the external folder can still be decompiled after the same operation.

It seems that this encryption is only for dependent libraries.

If you don't want others to get your source code, it is recommended to write your program's entry function in a separate file, and package exe with encryption. In this way, even if other people try to decompile, they can only get your entry function.