This article will use concepts + exercises to help understand

An ordinary Person function is defined, which is still an ordinary function at this time

I'll do this at this time

At this point, the Person function is not an ordinary function, but a constructor. And instantiates an object p1

The instantiated object p1 will have the properties and methods of the constructor.

Here is a direct question. Why does an object be created after the Person function is new, and the object also has the properties and methods of the constructor Person.

Here we have to mention the steps to be performed after the new operation:

3. Point this in the constructor to

This is why this.name = name is used in the constructor to create different objects. This always points to the created object.

4. Execute the code in the constructor

5. If the constructor returns an object, it returns the modified object, otherwise it returns a new object

After understanding the process of creating objects, let's talk about the disadvantages of a constructor.

Look at the above example to explain why the method defined in the constructor will be created once when creating each instance, so why two methods have the same name but are not equal. Therefore, in order to optimize this disadvantage, we have to define attributes and methods separately.

At this time, go directly to the prototype.

We just said that if the constructor defines a method, there will be some disadvantages, so we will use the prototype to solve this disadvantage

So what is the prototype?

Each function creates a prototype attribute, which is an object containing attributes and attributes that should be shared by instances of a specific reference type

method. In fact, this object is the prototype of the object created by calling the constructor. The advantage of using a prototype object is that it is defined on top of it

To put it simply:

The constructor. Prototype is the prototype object

Here I will lead to three properties__ proto__ constructor prototype 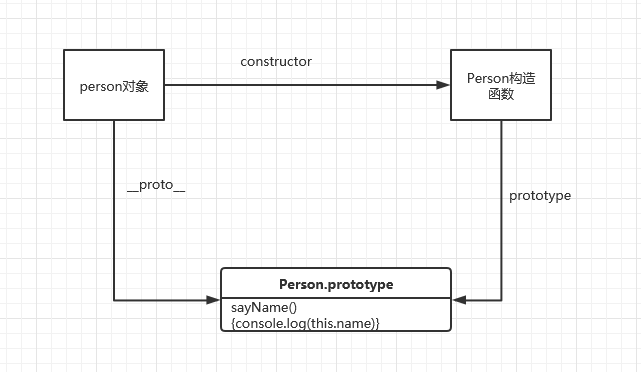 __ proto__ Is a property pointer in the object that can point to Person.prototype

After looking at the figure, we can see why the person object can call the method sayName that is not defined by the constructor

After reading the above concepts, you may not quite understand the concepts of prototype and prototype chain. Let's do exercises directly to deepen our understanding.

2: the above concept says that the methods in the prototype are public, so you don't have to create another method for an object

3 : f1.__proto__ It is the prototype object pointing to Fn that gets the method getY in Fn.prototype, so it is true

4 : f1.__proto__ Is to point to the prototype object of Fn and obtain the method getX in Fn.prototype,

The method getX in getX comes from the constructor instance, so the two different methods are false

6: the constructor of F1 is Fn

8: call getX in the instantiated object. The answer is 100

10: there is no getY in the instantiated object here. You can only find the getY and this call on the prototype. Who calls to whom, so the answer is 200

9 : f1.__proto__ It is equivalent to Fn.prototype call. this points to x on the problem prototype, so it is 20

11: FN. Prototype. Gety() this points to the problem. If there is no y on the prototype, it outputs undefined

Summary:
1. First understand the new process of creating constructor
2. Clarify the difference between constructor definition method and prototype constructor
3. Three attributes__ proto__ constructor prototype relationship
4. You can draw your own picture to understand
If there are any mistakes above, please correct them and learn love & & peace together