In the real world, many objects do not exist independently, and a change in the behavior of one of them may lead to a change in the behavior of one or more other objects. For example, when the price of a commodity rises, some businesses are happy and consumers are sad. Also, when we drive to an intersection, we stop at a red light and go at a green light.There are many other examples, such as stock prices and shareholders, WeChat public numbers and WeChat subscribers, weather forecasts and listeners from meteorological offices, thieves and police, etc.

Definition and characteristics of patterns

A one-to-many dependency exists between multiple objects. When the state of an object changes, all objects that depend on it are notified and updated automatically. This mode is sometimes called publish-subscribe mode, Model-View mode, and it is an object behavior mode.

Advantages and disadvantages of the observer model:

Structure and implementation of patterns

When implementing the observer mode, it is important to note that there is no direct call between the specific target object and the specific observer object, otherwise they will be tightly coupled, which violates the object-oriented design principles.

1.The structure of the pattern

The main roles of the observer mode are as follows.

The implementation code for the observer mode is as follows:

The program runs as follows: 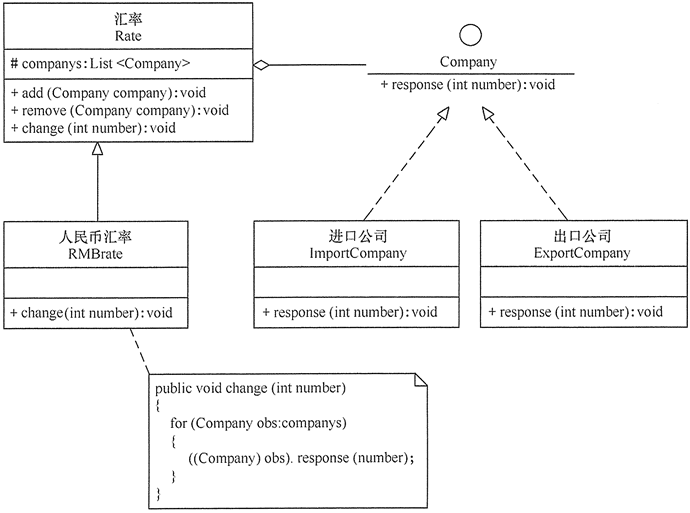 The program code is as follows:

The program runs as follows:

The most frequently used observer mode in software development is event handling in form programming. All components in the form are "event source", which is also the target object, while the object of event handler class is the specific observer object. The following is an example of event handler for a school bell to illustrate how Event Handling Model works in Windows.

From the previous analysis and application examples, it is known that the observer pattern is suitable for the following situations.

The Observable class is an abstract target class that has a Vector vector to hold all observer objects to be notified. Here are three of its most important methods.

The Observer interface is an abstract observer that monitors changes in the target object. When the target object changes, the observer is notified and the void update(Observable o,Object arg) method is called to do the appropriate work.

Notes: 1. JAVA already has support classes for the observer mode. 2. Avoid circular references. 3. If executed sequentially, an observer error will cause the system to become jammed, generally in an asynchronous manner.