Advantages: it is still effective when there is less data, and can deal with multi category problems

Disadvantages: it is sensitive to the preparation method of input data.

Suppose we have a data set, which is composed of two types of data. The data distribution is shown in the figure below: 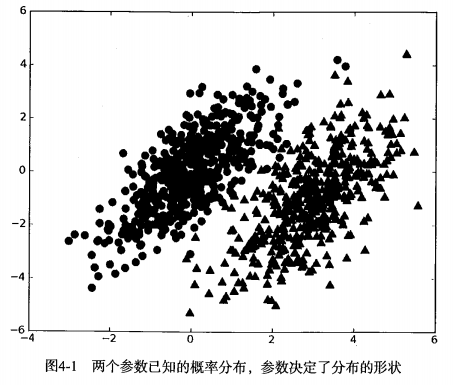 That is, we will select the category with high probability. This is the core idea of Bayesian decision theory, that is, to choose the decision with the highest probability.

The application of decision tree will not be very successful. Compared with simple probability calculation, KNN calculation is too large. Therefore, for the above problems, the best choice is the probability comparison method.

Next, in order to learn how to calculate p1 and p2 probabilities, it is necessary to discuss conditional probabilities.

If events A1, A2,... Constitute a Complete event group If there is a positive probability, the following formula holds for any event B:

This formula is the full probability formula.

In particular, for any two random events A and B, the following holds:

The formula is obtained through the deformation of conditional probability formula:

We call P(A) A priori probability, that is, we judge the probability of event A before event B.

P(A|B) is called "A posteriori probability", that is, after the occurrence of event B, we reassess the probability of event A.

P(B|A)/P(B) is called "possibility function", which is an adjustment factor to make the estimated probability closer to the real probability.

Therefore, the conditional probability can be understood as the following formula:

If the "possibility function" P (b|A) / P (b) > 1, it means that the "A priori probability" is enhanced and the possibility of event A becomes greater;

If "possibility function" = 1, it means that event B is not helpful to judge the possibility of event A;

If the "possibility function" < 1, it means that the "A priori probability" is weakened and the possibility of event A becomes smaller.

1. Process description
Training of naive Bayesian classifier model: first, provide two groups of identified mail, one is normal mail, the other is spam, and then "train" the filter with these two groups of mail. Firstly, all emails are parsed, each word is extracted, and then the probability of each word in normal emails and spam is calculated. For example, if the word "cut" appears 200 times in spam with 4000 words (no repetition), then the frequency of the word in spam is 5%; If it appears 1000 times in a normal email with 4000 words (no repetition), the frequency of the word in a normal email is 25%. At this time, the filtering model of the word "cut" has been preliminarily established.
The naive Bayesian classifier model is used for filtering test: read in a new e-mail that is not classified, and then analyze the e-mail. It is found that it contains the word "cut". P(W|S) and P(W|H) are used to represent the probability of this word in spam and normal e-mail respectively. Then, the probability of each word parsed in the email (corresponding training model has been established) belonging to normal email and spam is multiplied respectively. Finally, the probability of the email belonging to normal email and spam is compared, and the email can be classified as the one with higher probability.

Note w represents a vector (can be understood as an email after vectorization), which is composed of multiple values. In this example, if the number of numerical values is the same as the number of entries in the vocabulary, the Bayesian formula can be expressed as: 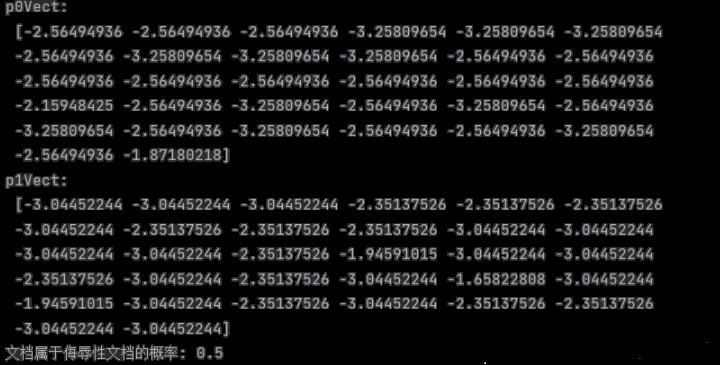