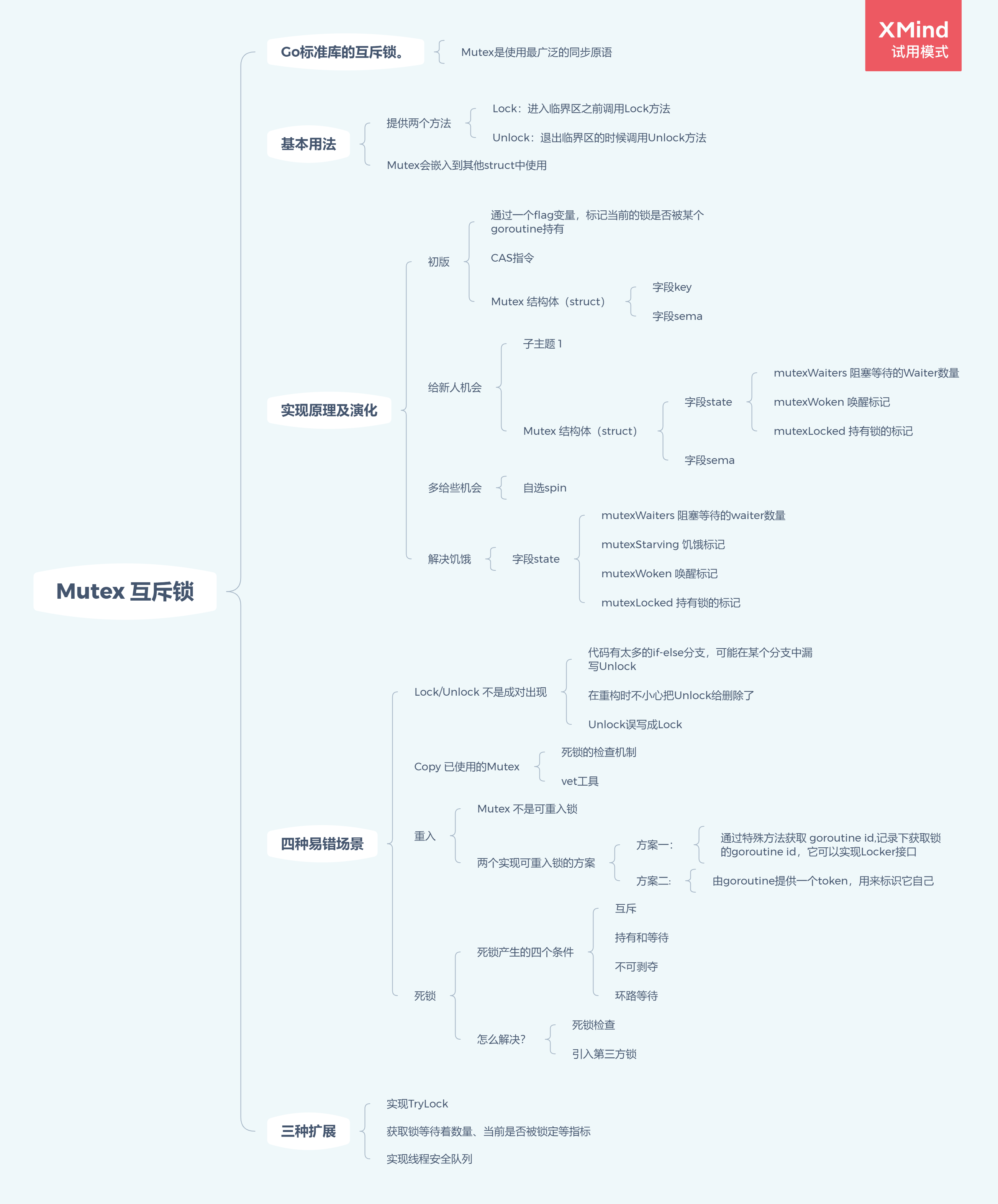 A critical zone can be a shared resource or an entire set of shared resources, such as access to a database, operations on a shared data structure, use of an IO device, and calls to connections in a connection pool. 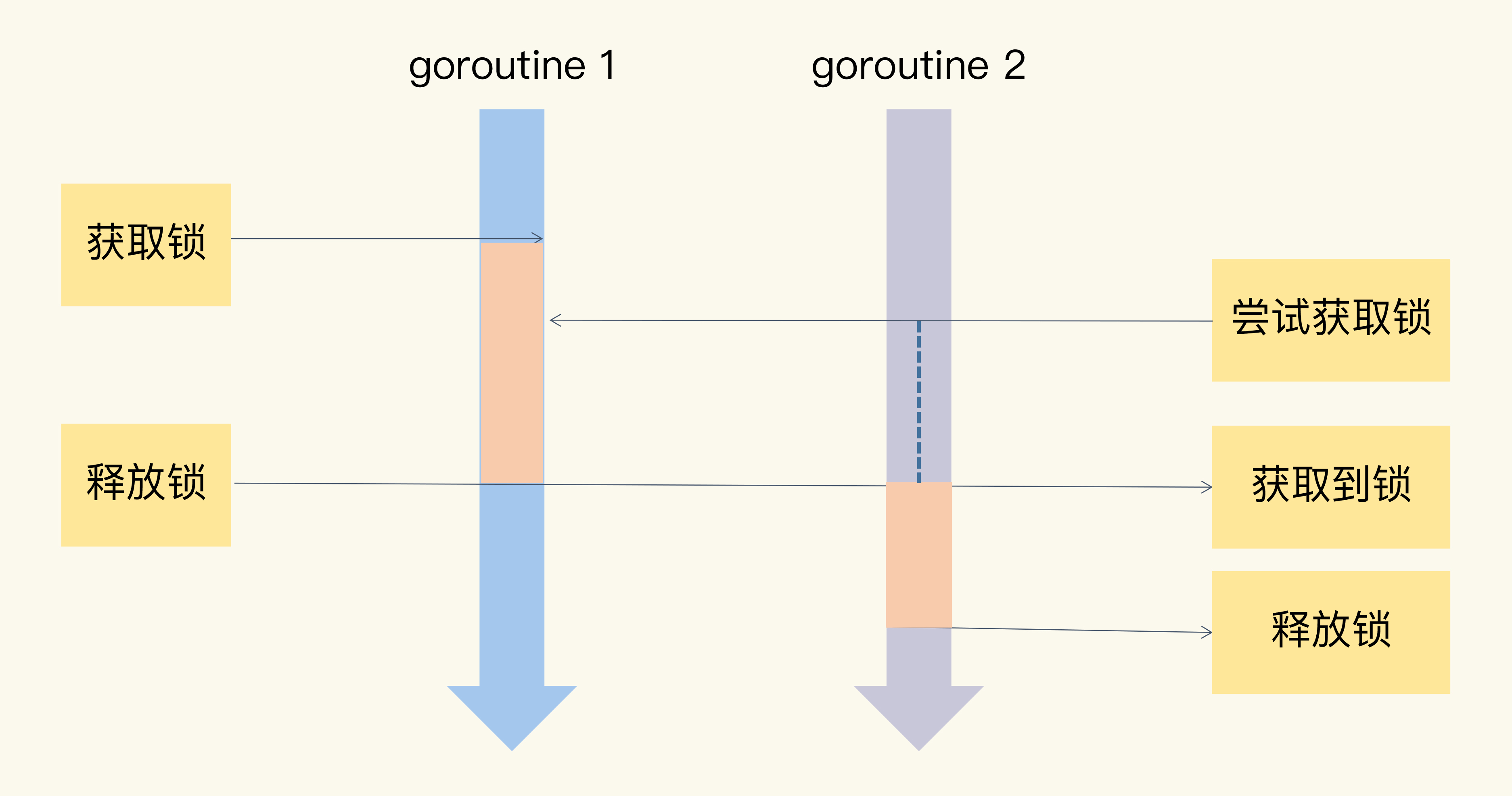 mutex is the most widely used synchronization primitive (concurrent primitive)

When using Mutex, you must ensure that goroutine does not release locks that it does not hold, and you must follow the principle of "who applies, who releases"

Which of the waiting goroutine s will get Mutex first after the lock is released?

Mutex has two modes of normality and hunger

CAS is the foundation for mutex and synchronization primitives

CAS is an atomic operation supported by the CPU and its atomicity is guaranteed at the hardware level. 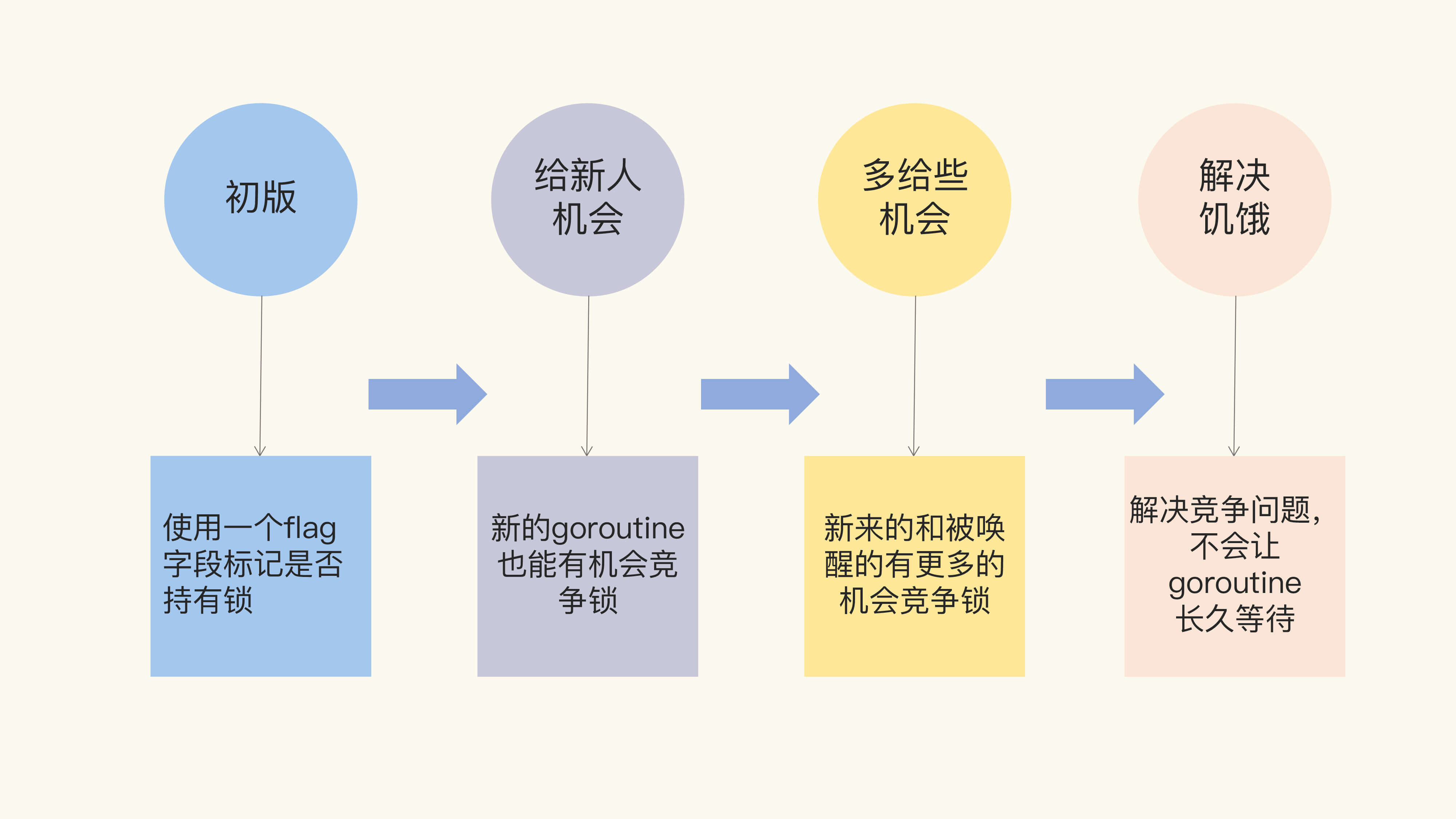 Marks whether the current lock is held by a goroutine by setting a flag variable.

If the flag value is 1, the lock is already held and other competing goroutine s can only wait.

If the flag has a value of 0, you can set the flag to 1 through cas, identifying that the lock is held by the current goroutine. 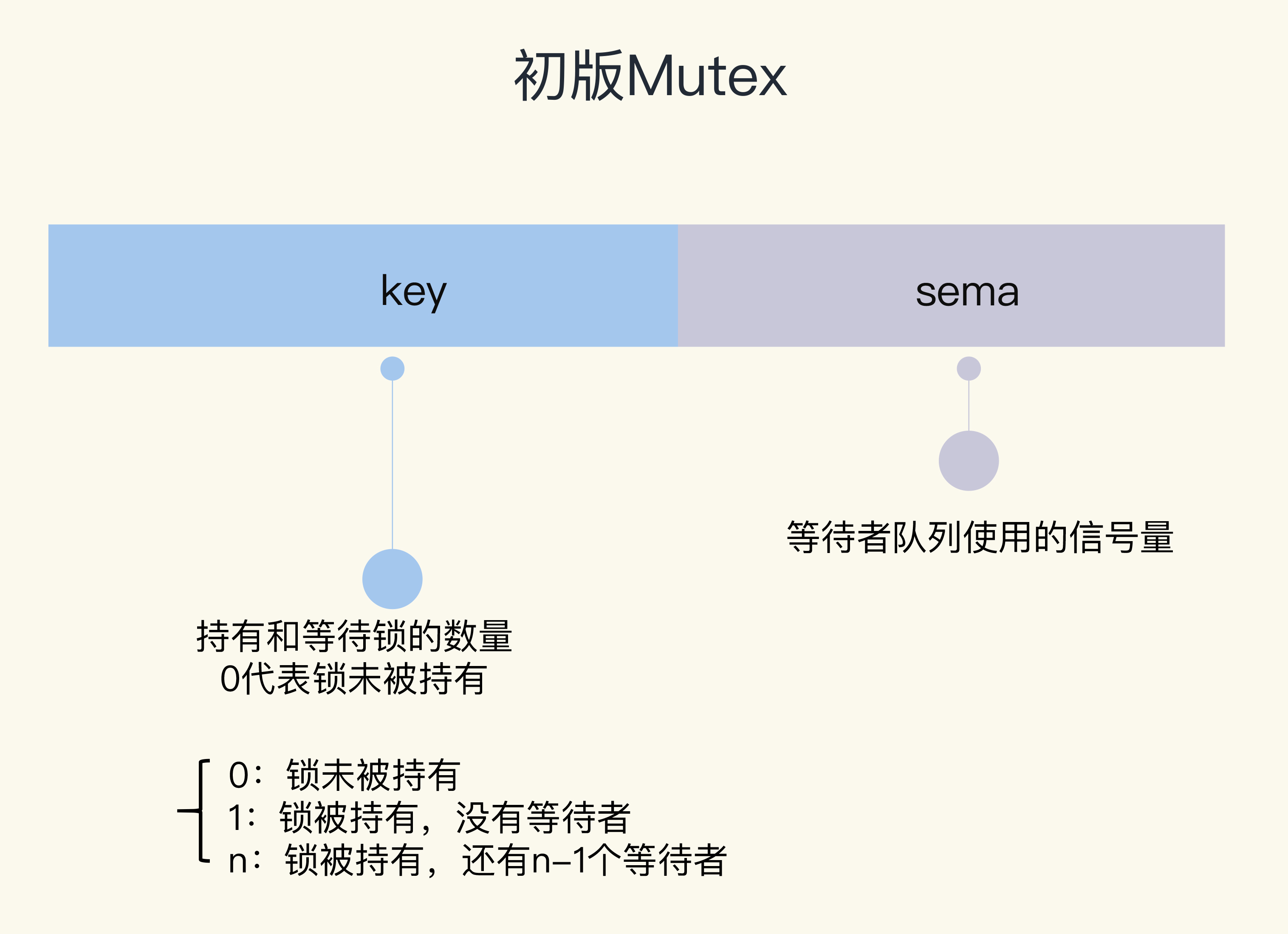 A goroutine requesting a lock queues for mutex acquisition. Although this may seem fair, it is not optimal in terms of performance. Because if we can give the lock to a goroutine that is consuming CPU time slices, there is no need for context switching and there may be better performance under high concurrency

Mutex still contains two fields, but the first field has been changed to state and the meaning has changed

state is a composite field that contains multiple meanings, allowing mutual exclusion with as little memory as possible. 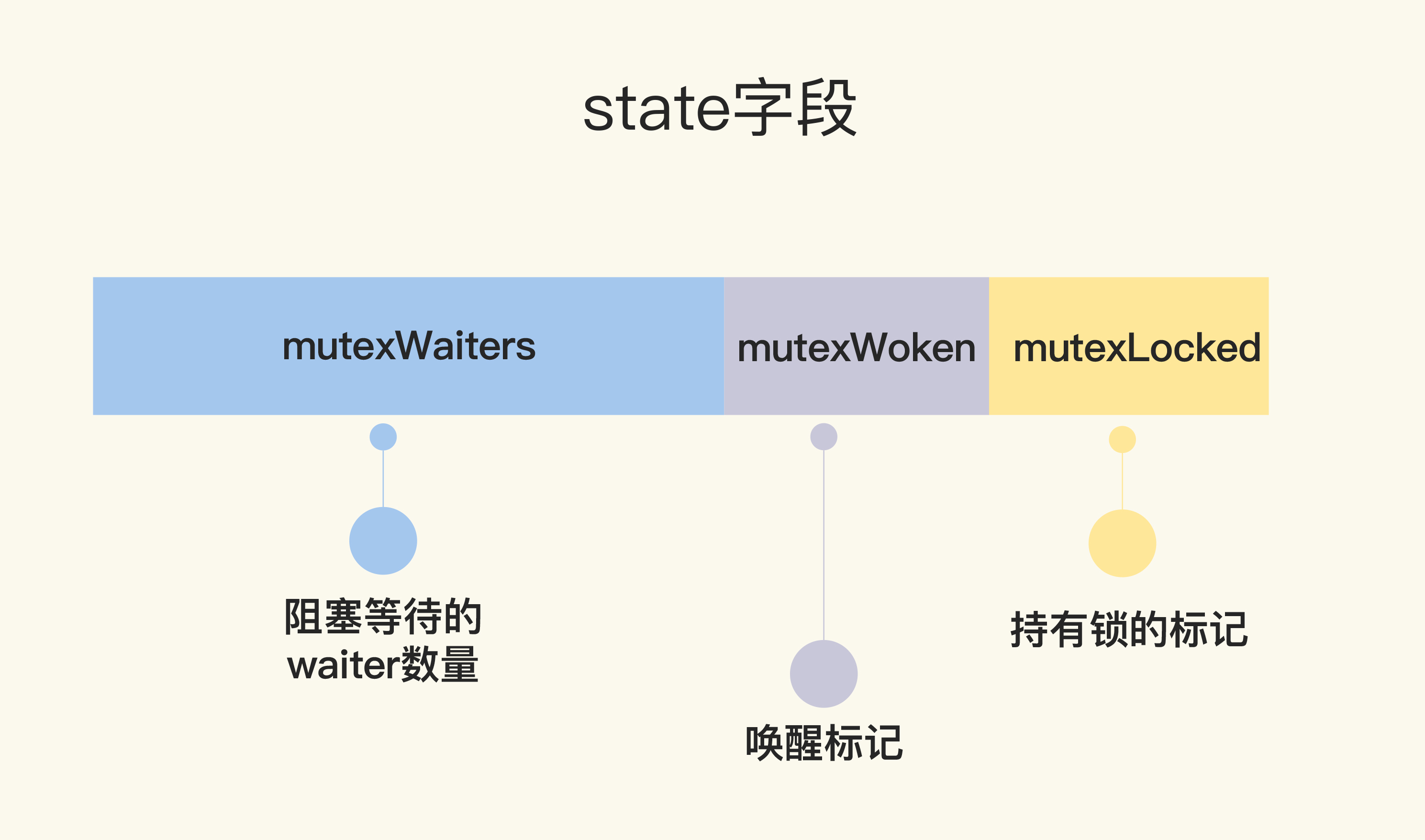 Changes to the original design:

If a new goroutine or waked goroutine fails to acquire a lock for the first time, they will spin and try again and again runtime)

Mode, check whether the lock is released, try a certain number of spins, and then execute the original logic.

In Go 1.9 of 2016, Mutex added a hunger mode, making locks more fair, limiting unfair wait times by another millisecond, and fixing a big Bug: Always putting the waking goroutine at the end of the waiting queue results in more unfair wait times.

For the waiter holding the lock after Mutex wakes up in 2019, the scheduler can have a higher priority to execute 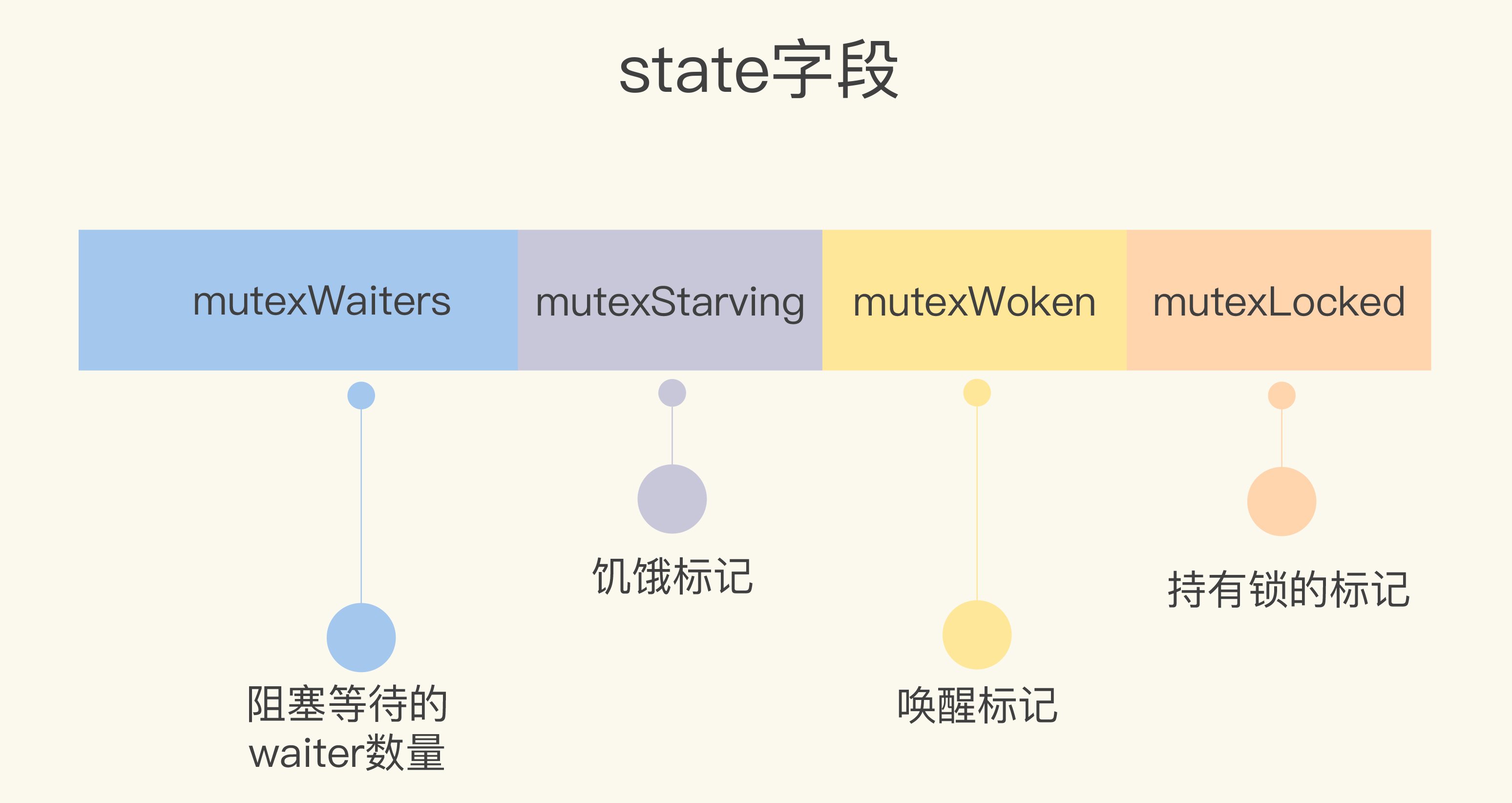 Lock and Unlock do not appear in pairs

Lock/Unlock does not appear in pairs, meaning a deadlock, or panic due to an unlocked Matrix of Unlock

The synchronization primitive of Package sync cannot be copied after use.

Mutext is a stateful object, and the state field records the state of the lock.

Mutex is not reentrant

How to implement reentrant locks 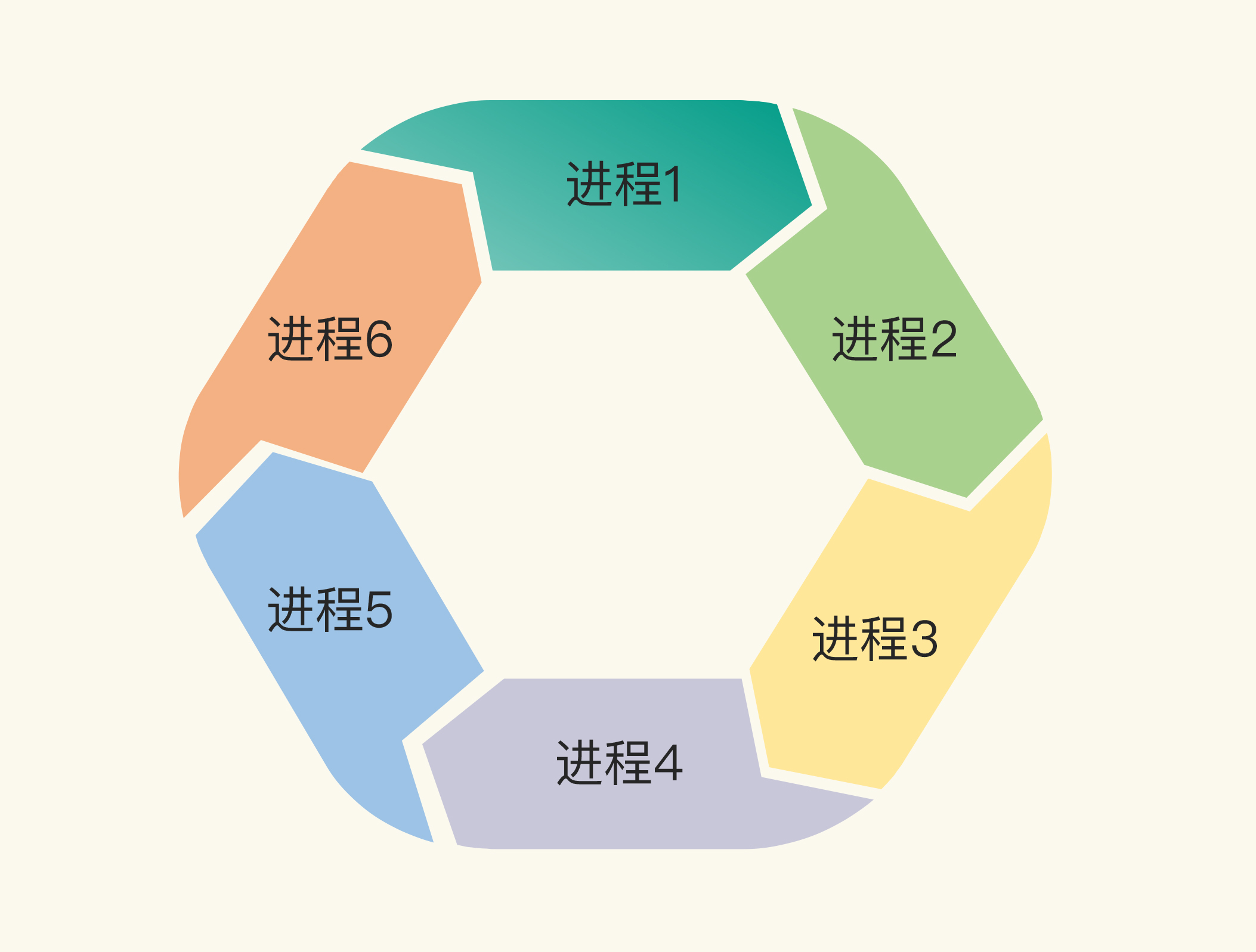