6. No lock of shared model

In this chapter, we will implement concurrency control through non blocking optimistic locks

There are the following requirements to ensure the thread safety of the account.withdraw withdrawal method Test5.java

The AtomicInteger solution seen earlier does not use locks internally to protect the thread safety of shared variables. So how is it implemented?

The key is compareAndSet, which is abbreviated as CAS (also known as Compare And Swap). It must be atomic operation. 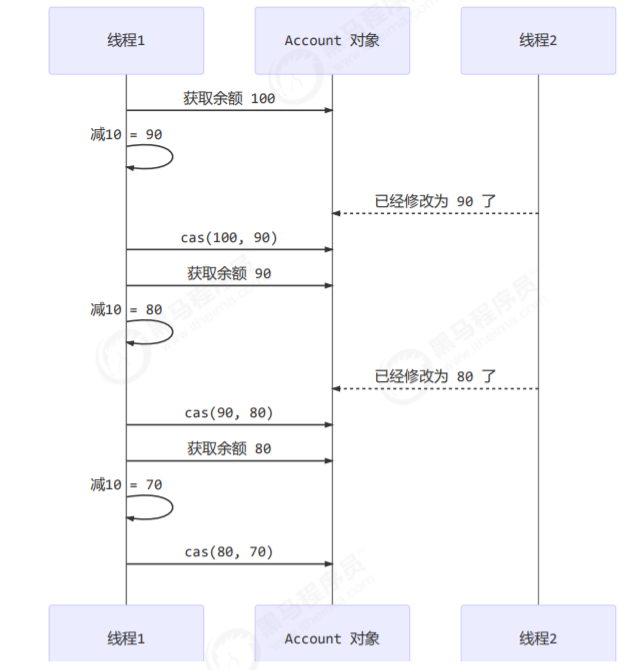 In the AtomicInteger in the above code, the value attribute that holds the value uses volatile. When obtaining a shared variable, in order to ensure the visibility of the variable, you need to use volatile decoration.

One more word
volatile only ensures the visibility of shared variables so that other threads can see the latest value, but it can not solve the problem of instruction interleaving (the original value cannot be guaranteed)
(child)

Why is lockless efficiency high

Combined with CAS and volatile, lock free concurrency can be realized, which is suitable for scenarios with few threads and multi-core CPU s.

java.util.concurrent.atomic also provides some concurrent tool classes, which are divided into five categories:

Let's first discuss the atomic integer class and take AtomicInteger as an example to discuss its api interface: by observing the source code, we can find that AtomicInteger is implemented internally through the principle of cas!! Seems to have found a new world! Test6.java

The following is an unsafe implementation process:

The solution code is as follows: in the AtomicReference class, there is a variable of type value to save the reference to the BigDecimal object.

ABA problem: Test8.java is shown in the following program. Although two threads in the other method modify the shared variable, it becomes the original value after modification, which is invisible in the main thread. This operation has no impact on the business code.

The main thread can only judge whether the value of the shared variable is the same as the initial value a, and cannot perceive the situation of changing from a to B and back to A. if the main thread wants to: as long as other threads [have moved] the shared variable, its cas will fail. At this time, it is not enough to compare the value, and it needs to add another version number. Use AtomicStampedReference to solve the problem.

Update an element in an array in an atomic way

The methods provided by the above three classes are almost the same, so let's take AtomicIntegerArray as an example. Example code: Test11.java

Note: using the Field updater, you can perform atomic operations on a Field of the object. It can only be used with volatile modified fields, otherwise the exception Test12.java will appear

The reason for performance improvement is very simple. When there is competition, set multiple accumulation units (but not exceeding the number of cpu cores), Therad-0 accumulates Cell[0], and Thread-1 accumulates Cell[1]... Finally summarize the results. In this way, they operate on different Cell variables when accumulating, thus reducing CAS retry failures and improving performance.

Where Cell is the accumulation unit

The significance of the @ sun.misc.contented annotation is discussed below

Let's start with cache. The speed of cache and memory is compared 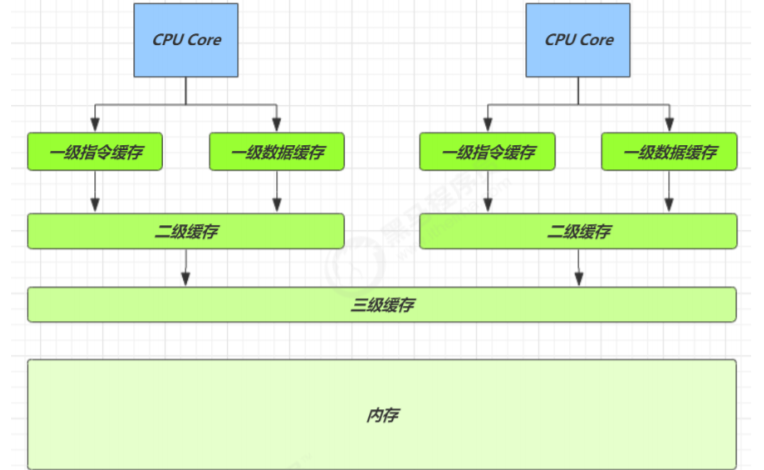 Because the speed of cpu and memory is very different, we need to read data to cache to improve efficiency. The closer the cache is to the cpu, the faster it will be.
The cache is based on the cache behavior unit, and each cache line corresponds to a piece of memory, generally 64 byte s (8 long). The addition of cache will cause the generation of data copies, that is, the same data will be cached in cache lines of different cores. The CPU should ensure the consistency of data. If a CPU core changes data, the whole cache line corresponding to other CPU cores must be invalidated.

Because cells are in the form of arrays and are stored continuously in memory, a Cell is 24 bytes (16 bytes of object header and 8 bytes of value)
This cache line can store 2 Cell objects. Here comes the question:
Core-0 to modify Cell[0], Core-1 to modify Cell[1]

No matter who modifies it successfully, the cache lines of the other Core will become invalid. For example, cell [0] = 6000 and cell [1] = 8000 in Core-0 should be accumulated
Cell[0]=6001, Cell[1]=8000. In this case, the cache line of Core-1 will be invalidated, @ sun.misc.contented is used to solve this problem. Its principle is to add 128 bytes of padding before and after the object or field using this annotation, so that the CPU can occupy different cache lines when pre reading the object to the cache. In this way, the cache line of the other party will not be invalidated

Let's take a look at the accumulation increment() method of the LongAdder class, which mainly calls the following methods

The logic of the first else if code in the figure above is the processing logic when cells are not created.

The logic of the if code in the figure above includes two cases: the cell corresponding to the thread has been created and the cell has not been created.

If the cell corresponding to the thread has not been created, the code in the first red box is executed. The logic is as follows

If the cell corresponding to the thread has been created, the code in the second red box is executed. The logic is as follows

Get the final result. The sum method is used to add up the values of each accumulation unit to get the total result.

Unsafe objects provide very low-level methods for operating memory and threads. Unsafe objects cannot be called directly, but can only be obtained through reflection. The park method of LockSupport and the underlying method of cas are implemented through the unsafe class. Test14.java

The problem is that the following code has a high probability of java.lang.NumberFormatException or incorrect date resolution results when running because SimpleDateFormat is not thread safe.

If an object cannot modify its internal state (properties), it is thread safe, because there is no concurrent modification! Such objects are
There are many in Java. For example, after Java 8, a new date formatting class DateTimeFormatter is provided:

Another more familiar String class is immutable. Take it as an example to illustrate the elements of immutable class design

However, some students will say that when using strings, there are also some methods related to modification, such as substring. Let's take a look at these methods
Take substring as an example:

It is found that it calls the String construction method to create a new String, and then enter the construction to see whether to make a change to the final char[] value
Modified: it is found that there is no change. When constructing a new string object, a new char[] value will be generated to copy the content. This method of avoiding sharing by creating replica objects is called [protective copy]

7.3 summary of this chapter