"Everything is a file", a concept heard just after contacting Linux, embodies the design philosophy of Linux, abstracts all software and hardware resources into files, enables users to operate almost all system resources with the same api, brings great convenience to application development, and also makes a unified interface framework for the implementation of the underlying driver. The concept of "file" has been redefined in Linux. It is not only a piece of data on the disk, but also an entry to interact with the system. In Linux, the file system is responsible for organizing and managing these files, and it also needs to provide various interfaces for file operation. Its concept is no longer just a way to organize disk data, but also contains a complex framework and strategy. What is the role of "file system" in Linux? What features are available? Let's try to comb through this series.

To find out what functions the file system contains in Linux, my idea is to start directly from the source code and see what codes are in the fs / directory. Since the kernel designer must have a reason to classify these functions as fs, I sort out the following general structure: 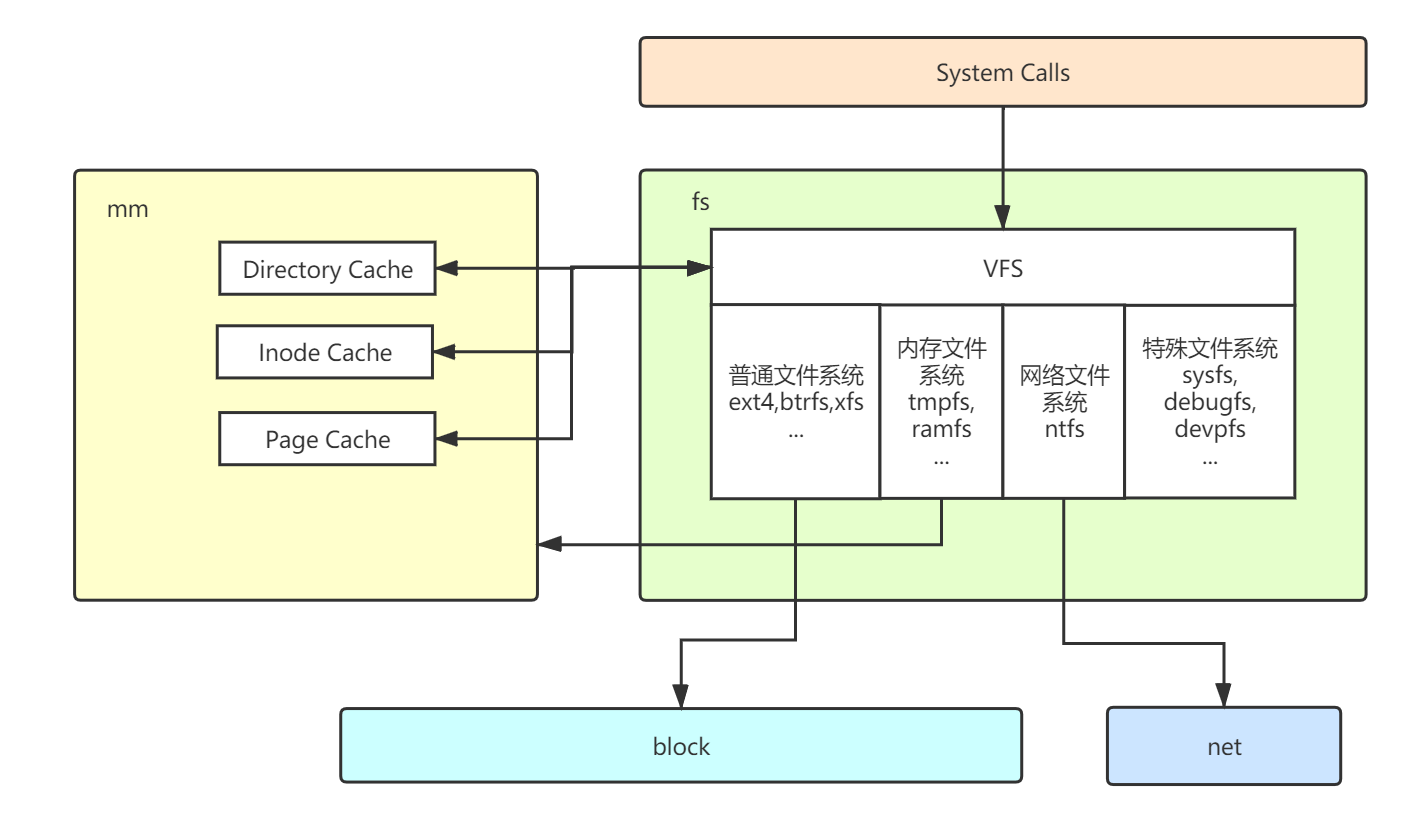 Most of the code in fs / is about IO mode, which is not included in the figure. Summarize the functions of the file system in Linux, which are mainly divided into four parts. This series is also discussed according to this:

The advantage of Linux file system lies in its strong scalability and compatibility. The file system driver is integrated in the kernel in the form of modules, which makes the maintenance and expansion of each file system very convenient. When the system is running, Linux makes a variety of file systems coexist harmoniously. Users can freely mount different disks or partitions anywhere in the directory tree. After that, users can use the unified interface to operate each file system transparently without considering the underlying differences. In order to achieve this effect, VFS plays a key role. The VFS layer uses the object-oriented design method to abstract the file system, so that any file system can be described with fixed objects. The file system driver implements relevant methods according to the VFS framework. When the user operates, VFS uses different methods to complete the underlying processing according to the type of file system.

Describes a mounted file system, including device name, partition size, block size and other basic data, superblock method set, inode list, etc. Superblock contains a lot of information, which corresponds to the actual data on the disk. It is often referenced by the internal and external interfaces as an input parameter, and its updates will be synchronized to the disk in time.

The implementation of superblock is mainly to allocate, update, release, delete and process the data of the inode object.

Describe a file (including ordinary file, directory, FIFO, etc.), including file type, size, update time and other data. The information contained in the inode method set also corresponds to the data on the disk and needs to be synchronized in time.

Describes a node in the system directory tree, usually points to an inode. Its main information includes the parent-child dentry of the dentry, the file name, the inode pointed to, the dentry method set, etc. the main function of dentry is to record the location of an inode in the directory tree. Dentry structure is stored in memory dcache, but there is no directly related data in disk.

dentry is translated into directory item, which needs to be distinguished from directory, for example, a path "/ var/log/txt.log ”, which contains 4 directory entries' / ', "var", "log"“ txt.log ", the first three directory entries point to the directory inode, and the last one points to the normal file inode.

The implementation of dentry is to initialize, compare, verify and delete the dentry structure. Because dentry is usually only maintained in memory, the underlying file system driver often does not need to implement all methods, and the system has a default processing flow.

Describes a file opened by a process, which is created when it is opened. The main information is the collection of file methods and the offset of the current file. For a file, its inode object is unique, and a file can be opened by multiple processes, and its file object can have multiple.

The main method of file implementation is the operation of file content.

The mount structure is managed by hash table and managed by & MNT_ Parent - > MNT and mnt_mountpoint computes the hash, which enables you to find the mount directly according to the current path structure when traversing the path, so as to find the next mounted file system.

Describes the path under a file system, which contains the vfsmount structure of its file system and the dentry of the current node.

Describes a part of page in pagecache, which is used to cache data in an inode or block device.

address_ The implementation of space mainly includes data reading and writing between memory page and storage device, as well as providing hook interface for file system driver during operation.

The file system needs to match the directory tree of the system with the actual files on the disk, and provide access methods. An example is given to illustrate the interaction between objects. Suppose that the following file system of a system is in ext4 format. Mount a disk of fat format in / media/sda. Now read and write the 1.log file under the root directory of the fat disk, that is, directly read and write the "/ media/sda/1.log" file in the system.

First, see how to find the inode of the file in the fat disk according to the path. The structure chart is as follows: 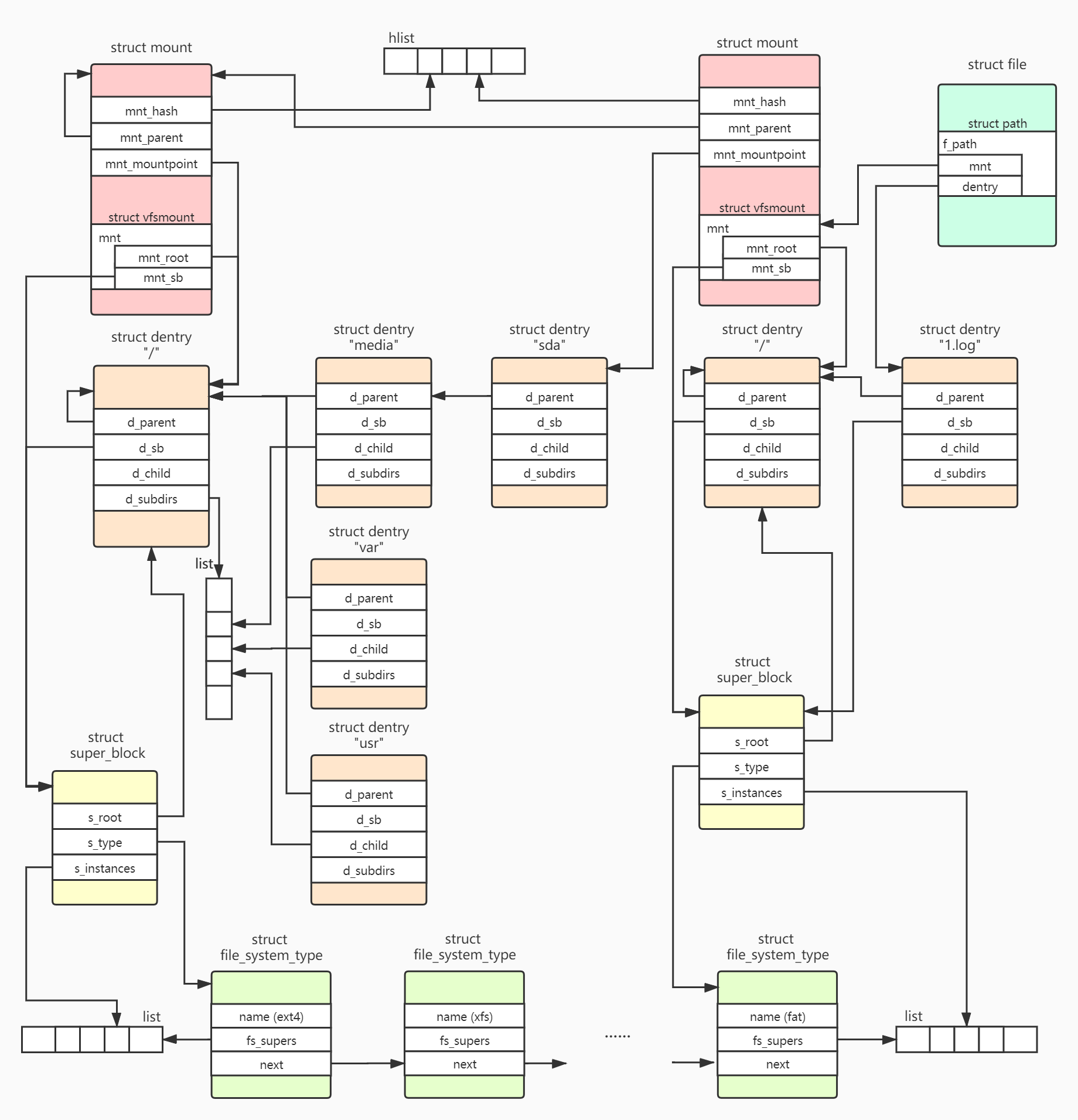 After the system is started, all file system drivers are loaded_ system_ The type structure is created and added to the global list management.

After the file system is mounted, super_block, mount, and root dentry structures are created and set up to relate to each other.

Execute open("/media/sda/1.log") and start to search dentry item by item from the system root directory "/". The search strategy is to search from the cache first. If not, create a new dentry and associate it with the inode of the corresponding file on the file system. When traversing the "sda" of the root file system, it is found that the dentry is a mount point (dentry - > d_ Flags are marked with DCache_ Mount), find the mount of the fat disk according to the current path, change the next found dentry to the root dentry of the fat, complete the jump between different file systems, finally find the "1.log"dentry, establish the connection with the file, and open the end to return.

After finding the dentry and inode of the target file, let's see how to read and write. The structure chart is as follows: 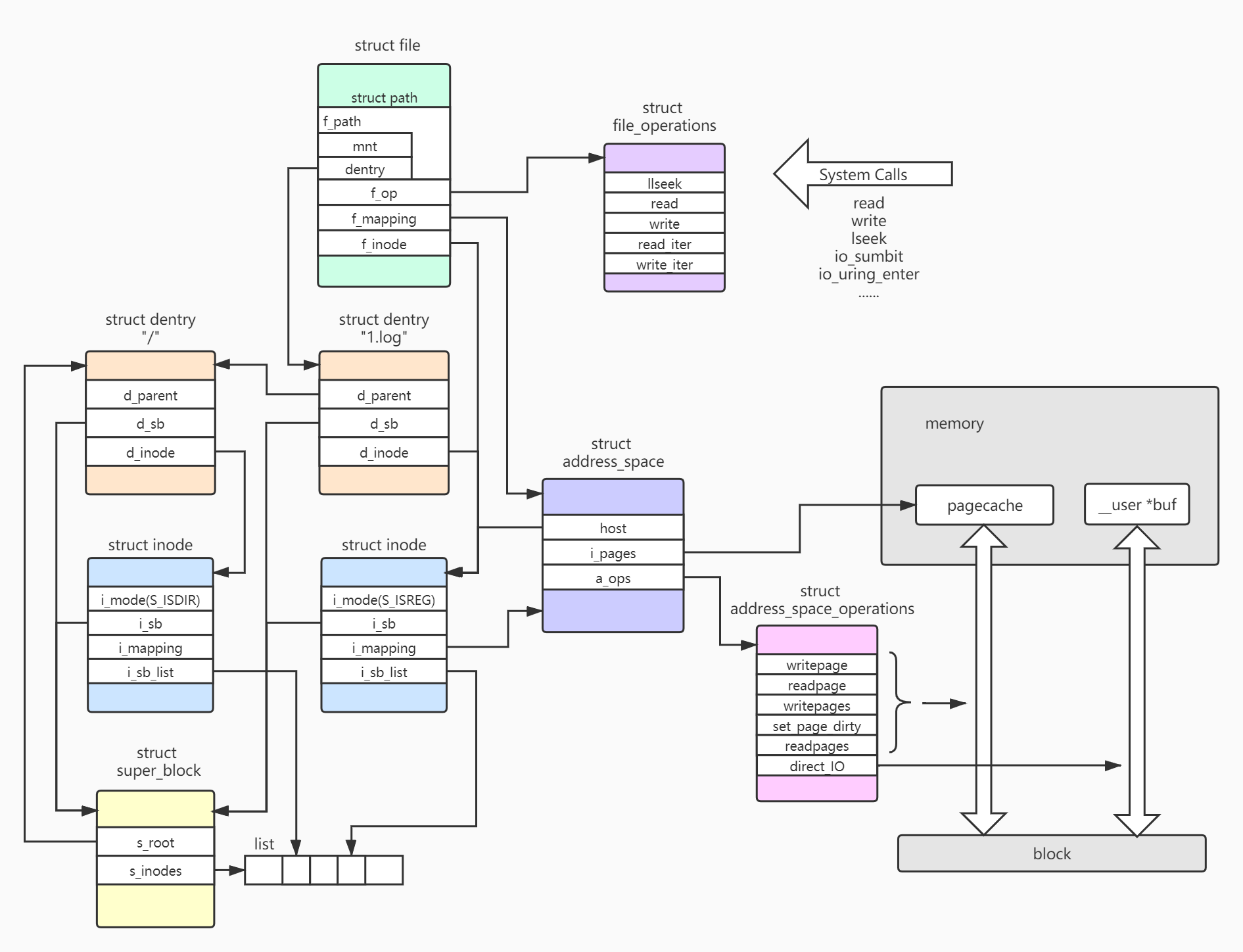 The system call reads and writes the file through the file structure. The file holds the inode of the corresponding file and its mapped address in pagecache_ space. The read-write process is mainly through file_operations, and address_space_ The two interfaces of operations are completed. file_operations is a set of upper interface, which is provided for system calls and internal modules to implement various IO models and other kernel functions requiring IO operations. address_space_operations is responsible for reading and writing data between the disk and memory, converting file operations to disk IO and sending it to the block layer. The memory side is usually pagecache, if O is specified_ Direct mode can also be the memory address provided by the application.

For example, for the last ordinary buffer IO read in ext4, the data on the disk will be read into the memory pagecache first, and then the data in the pagecache will be copied to the user buf. The approximate path is: the system calls read() - > file_ operations.read_ iter() -> generic_ file_ buffered_ read() -> address_ space_ operations.readpage () -> copy_page_to_iter()

VFS associates the directory tree of the system with the files on the disk, and defines the methods to support each object in the file system. It makes writing the file system driver do not need to pay too much attention to how to use the system, just need to implement according to the interface. The upper system calls and kernel modules using file IO do not need to pay attention to the underlying implementation, but can only focus on the specific read-write logic. It can be said that VFS plays a key role in the Linux file system.

This article mainly talks about how VFS abstracts the file system and the relationship and interface of each object, and what is under these abstractions and interfaces? The next part is about the implementation of file system driver.