From the definition, we can see that LinkedHashMap inherits from HashMap and implements the Map interface. This means that some excellent factors of HashMap can be inherited, such as hash addressing, fast search using linked lists to solve hash conflicts, and whether LinkedHashMap has been optimized for some inefficient contents in HashMap, such as container expansion process and traversal mode. Keep looking at the code.

I saw a very familiar attribute header, which appeared in the LinkedList. The English annotation is very clear. It is the head node of the two-way linked list, right.
Let's look at the accessOrder attribute. true indicates the order used less recently, and false indicates the insertion order. Of course, why don't you see the array? Don't forget that LinkedHashMap inherits from HashMap

Let's look at the difference between the node class of Entry and that in HashMap. 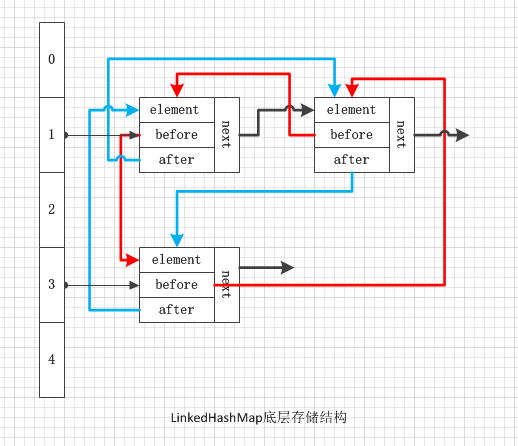 As can be seen from the above figure, LinkedHashMap is still a hash table. The bottom layer is composed of an array, and each item of the array is a one-way linked list, pointing to the next node from next. However, the difference between LinkedHashMap is that there are two more attributes before and after in the node. These two attributes form a two-way circular linked list, which maintains the order of elements in the Map container. Look at the recordRemoval method in Entry. This method will be called when the node is deleted. After the normal deletion of the linked list node in the Hash table, the method is called to correct the backward pointing relation of the bidirectional linked list after the node is deleted. From this point of view, LinkedHashMap is slower than add, remove and set of HashMap, because it needs to maintain two way linked list.

init() is an empty method in HashMap, that is, a callback function reserved for subclasses. Let's take a look at the implementation of init() method in LinkedHashMap

It can be seen that there are two more logic in the addition method than in HashMap. One is to judge whether to delete the first element or expand the capacity when the Map capacity is insufficient, and the other is to maintain a two-way linked list. When judging whether to delete elements, we found that the removeEldestEntry method always returns false. Originally, if you want to implement the Cache function, you need to inherit the LinkedHashMap and rewrite the removeEldestEntry method. The container function is provided by default.

In the end, let's simply implement a Cache function based on LInkedHashMap