[learn the compiler from scratch] 13. How to write Pass in MLIR?

[introduction to GiantPandaCV] this article has been studied for a long time, and then summarized according to their own understanding steps, mainly the contents of Articles 3 and 4 of MLIR Toy Tutorials. Here we mainly explain how to customize Pass in MLIR. Here we mainly introduce various skills of defining Pass in MLIR with four examples: eliminating continuous transfer operation and Reshape operation, inline optimization Pass and shape derivation Pass. In fact, it is not difficult to understand. However, it is necessary to master these Pass implementation skills to get started with MLIR. "I maintained a project in the process of learning the compiler from scratch: https://github.com/BBuf/tvm_mlir_learn , it mainly records learning notes and some experimental codes. At present, it has obtained 150+ star. If you are interested in deep learning compiler, you can have a look. You will be more flattered if you can click star. "

We have a preliminary understanding of what MLIR is, and talked about the specific process of generating MLIR from source files by Toy language, as well as the core components of MLIR, such as MLIRGen, Dialect, Operation and TableGen, and how they interact.

This note will summarize how expression morphing in MLIR is implemented based on Toy Tutorials.

Chapter3: expression deformation in MLIR (how to write Pass)

The goal here is to eliminate two Transpose sequences with mutual cancellation effect: transfer (transfer (x)) - > x, that is, there must be redundant operations for continuous transfer operations on the same input. The source code corresponding to this operation is as follows (in MLIR / test / examples / toy / CH3 / transfer_transfer. Toy):

If we don't use any optimized Pass, let's see what the MLIR expression generated by the Toy source program looks like. Use the following command to generate MLIR:. / toyc-ch3.. /.. / MLIR / test / examples / Toy / CH3 / transfer_ transpose.Toy -emit=mlir.

You can see that the generated MLIR expression performs two real transfers on x and returns the Tensor after two transfers. But in fact, these two transfers are unnecessary, because the output result is actually the incoming x. Therefore, in order to optimize this situation, we first use C + + to write the code for expression matching and rewriting (in mlir/examples/toy/Ch3/mlir/ToyCombine.cpp):

Next, you need to register the matching rewrite pattern just created in the normalization framework so that the framework can call it. For more information on canonicalization, please see https://mlir.llvm.org/docs/Canonicalization/ , the registered code is as follows (the code is still: mlir/examples/toy/Ch3/mlir/ToyCombine.cpp):

Finally, we need to add the optimization based on the normalization framework to the running process in the main program. This part of the code is in the dumpMLIR function in mlir/examples/toy/Ch3/toyc.cpp. As shown in the red box below: 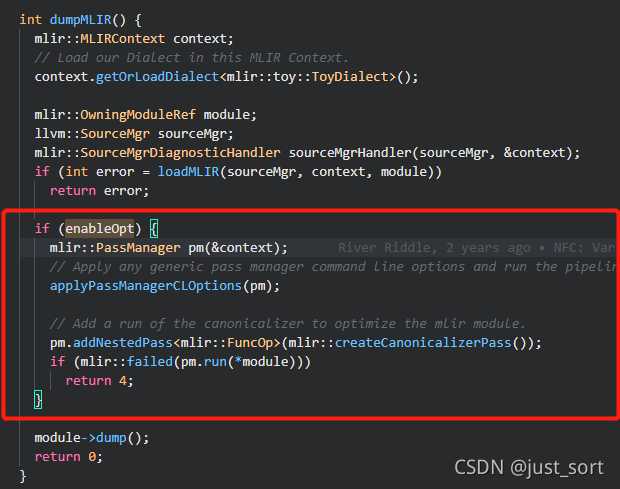 So far, we have completed the matching and rewriting of MLIR expression based on C + +. We can use the following command to see whether the MLIR expression generated after rewriting the above transfer expression has removed the transfer. The command is:. / toyc-ch3.. /.. / MLIR / test / examples / toy / CH3 / transfer_ transpose.toy -emit=mlir -opt. The result is:

It can be seen that the optimized MLIR expression has removed the transfer operation and achieved the optimization effect.

Use DRR to optimize the tensor deformation (Reshape) operation

Here, take the tensor reshape operation to eliminate redundancy in the MLIR expression as an example. The corresponding toy source file is as follows (in mlir/test/Examples/Toy/Ch3/trivial_reshape.toy):

Obviously, the shapes and values of a, b and c are the same, and these reshape operations are redundant. Next, we will define expression matching and rewriting rules based on the DDR framework. There are several situations to consider here (the code implementation here is in mlir/examples/toy/Ch3/mlir/ToyCombine.td).

Replace ReshapeOp(ReshapeOp arg) with ReshapeOp arg. For many times of the same tensor deformation operation, you can perform it once.

That is, when 0.getType() is the same as 1.getType(), it is redundant, and the operand $arg is used instead.

Next, we can use the ODS framework and the defined ToyCombine.td file to automatically generate the code file ToyCombine.inc. Use the following command:

Of course, when building a project, you can also configure the generation process in cmakelists.txt: mlir/examples/toy/Ch3/CMakeLists.txt. As follows:

In Chapter 3, we learned how to implement expression rewriting in MLIR, but there is also a very obvious problem: the Pass we implemented for Toy language can not be reused in other dialog abstractions, because here are only specific operations for some operations of Toy language. If each conversion is implemented for each dialog, it will lead to a large amount of duplicate code. Therefore, this section takes two examples to explain how to implement generalized expressions in MLIR.

This article uses the following examples (in mlir/test/Examples/Toy/Ch5/codegen.toy):

This is an MLIR expression without optimization. We can see that the Shape of Tensor is unknown before instantiating Tensor, that is, Tensor < * xf64 > in the expression. This will affect subsequent passes, such as Shape related passes defined in Chapter 3, resulting in inadequate optimization. Therefore, we hope to know the Shape of each Tensor before executing the Pass related to Reshape, so here we will introduce the implementation of a Shape inference Pass. In addition, an inline Pass is introduced to reduce the cost of function calls.

Looking at the code above, we can find that multiply_ Small functions such as transfer are called frequently. At this time, the cost of function call itself can not be ignored. Therefore, an inline Pass is defined here, hoping to multiply_ Transfer this function becomes an inline function to improve operation efficiency.

MLIR provides a general interface DialectInlinerInterface for inline processing, which contains a set of virtual hooks that can be overridden by Dialect. We need to define the inline interface and expression rewriting rules for Toy Operation based on this class. The code is implemented in: mlir/examples/toy/Ch5/mlir/Dialect.cpp:

This part of the code defines the inline interface and expression deformation rules for Toy Operation. The two isLegalToInline overloaded functions are two hooks. The first hook is used to check whether the given callable operation can be inlined into the given call is legal and whether it can be inlined. The second hook is used to check whether a given operation is legally inline to a given region. The handleTerminator function only handles toy.return, replacing the operand it.index() of the return operation with the return value it.value() (I don't know much about QAQ here).

Next, you need to add the above expression deformation rule in the definition of Toy Dialect, which is located in mlir/examples/toy/Ch5/mlir/Dialect.cpp.

Next, we need to let the inline know toy.generic in IR_ Call means to call a function. MLIR provides an Operation interface CallOpInterface, which can mark an Operation as a call. To add the above operations, you need to add the line "MLIR / interfaces / callinterfaces. TD" in the definition (mlir/examples/toy/Ch5/include/toy/Ops.td) file of toy dialog.

Then add a new Operation in the dialog definition section. The code is as follows:

Then the GenericCallOp function is implemented in mlir/examples/toy/Ch5/mlir/Dialect.cpp. The code is as follows:

Next, you need to add the cast operation in the dialog definition and set the interface to call. Why do I need to add a cast operation? This is because the type of input tensor is determined at the time of function call. However, when defining a function, the type of input tensor is uncertain (generalized type, which can be seen from the original version of MLIR expression above). Therefore, a hidden data type conversion is required when calling, otherwise the inline operation cannot be performed. Therefore, a cast is introduced here. The cast operation can convert the determined data type to the data type expected by the function. Next, add the cast operation in mlir/examples/toy/Ch5/include/toy/Ops.td:

Next, you need to rewrite the areCastCompatible method of cast op (in mlir/examples/toy/Ch5/mlir/Dialect.cpp):

In addition, we also need to rewrite the hook on the ToyInlinerInterface, that is, the materializeCallConversion function:

This function is the entry to inline Pass.

Add the inline Pass to the optimized pipline. In mlir/examples/toy/Ch5/toyc.cpp:

After pm.addPass(mlir::createInlinerPass()); In this line, there is an inline Pass in the optimized pipline.

Let's see what the original MLIR expression looks like after inline optimization of Pass:

Now the MLIR expression has only one main function, the previous transfer function has been inlined, and you can see the functions implemented by toy.cast.

The above inline Pass implements the conversion of Tensor of determined type into Tensor of generalized type, so that the inline Operation can be completed. Next, we need to deduce the generalized Tensor shapes according to the Tensor determined by the Shape. Here, you need to use the ODS framework to generate a custom Operation interface to derive the Shape of the generalized Tensor. The whole Shape inference process will also be abstracted into a Pass like inline, acting on the MLIR expression.

Step 1: use the ODS framework to define the Shape inference Operation interface

The code is implemented in mlir/examples/toy/Ch5/include/toy/ShapeInferenceInterface.td

Step 2: add the feature to the necessary Toy Operation definition

Take the Mul Operation of Toy language as an example, which is implemented in mlir/examples/toy/Ch5/include/toy/Ops.td:

Step 3: define the shape derivation function of the corresponding Operation

For each Operation requiring shape derivation, the corresponding inferShapes() function needs to be defined, such as Mul Operation. The resulting shape is the input shape (because it is an elementwise Operation). The code is implemented in mlir/examples/toy/Ch5/mlir/Dialect.cpp:

This step is to introduce the specific implementation of Shape derivation Pass. The previous steps are the preconditions of this step. In this step, a Shape derivation Pass class is defined to implement the Shape inference algorithm, and a Shape inference Pass will be created based on this Pass class. The code is implemented in mlir/examples/toy/Ch5/mlir/ShapeInferencePass.cpp.

ShapeInferencePass inherits FunctionPass and rewrites its runOnFunction() interface to implement shape inference algorithm. First, a list of operations whose output return value is generalized tensor will be created, and then the operator of tensor whose type is determined when traversing the list to find the input operand. If the exit loop is not found, otherwise, the Operation will be deleted from the loop and the corresponding inferShape() function will be called to infer that the output of the Operation will return to Tensor's shape. If the Operation list is empty, the algorithm ends.

Step 5: add the shape derivation Pass to the optimized pipline

Similar to inline Pass, you need to add the shape derivation Pass to the optimized pipline. The above inline Pass has been shown, and the code will not be pasted again.