This chapter mainly discusses how to realize rolling update and rollback, arbitrarily change the version and rollback the previous version (version update), while the next chapter will discuss Pod scaling and automatically expand and shrink applications according to machine resources (automatic capacity expansion instances).

This article is part of the author's Kubernetes series of e-books. E-books have been open source. Please pay attention. E-book browsing address:

First, let's deploy nginx and use nginx as the mirror of the exercise.

open   https://hub.docker.com/_/nginx   You can query the image version of nginx. The author selects three versions: 1.19.10, 1.20.0 and latest. We will choose between these versions when updating and rolling back later.

Readers need to clearly select three different versions of nginx. Our later upgrade rollback exercises will switch back and forth in these three versions.

First, we create a Deployment of Nginx. The number of copies is 3. When deploying for the first time, it is the same as the previous operation, and no special commands are required. Here we use the older version, and the author uses 1.19.0.

Note:   We can also add  -- record   Flag writes the executed command to the resource annotation   kubernetes.io/change-cause   Yes. This is useful for future inspection. For example, to view the commands executed for each Deployment revision, we will explain the role of this parameter later.

implement   kubectl get pods and kubectl describe pods can be observed that there are three pods, and the nginx image version of each Pod is 1.19.0.

kubectl set image   You can update the container image of existing resource objects, including   Pod,Deployment,DaemonSet,Job,ReplicaSet. In the updated version, the pod behavior of a single container is similar to that of multiple containers, so we can use the single container pod exercise.

Update the image version in the Deployment to trigger the Pod:

We can view the details of Pod:

You can see that the created Pod instance is version 1.20.0.

During the update process, a new version of Pod will be created and the old Pod will be gradually removed.

When we create a Deployment, we generate three pods. When we trigger the image version update, the pods will not be updated at one time, but only some pods will be redeployed at a time according to certain rules. The Pod update and replacement process is similar to the following figure (in fact, the number of pods may be greater than 3): 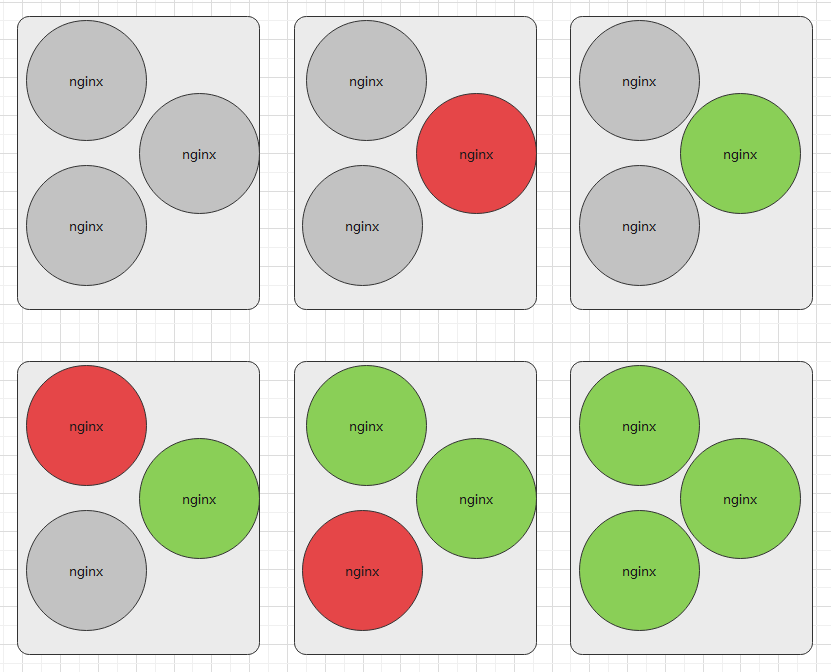 In addition, we can also   kubectl edit yaml   Update the Pod in the same way.

In order to record version update information, we need to   kubectl create deployment,kubectl set image   Add after the command  -- record.

Don't forget   kubectl scale   The command can also change the number of copies.

Only if the Deployment Pod template (i.e  . When the spec.template) is changed, for example, the label or container image of the template is updated, the Deployment online will be triggered.

The online / updated version mentioned here is because the container version will change, and the update generally refers to the modification of YAML, etc., which will not necessarily affect the container.

When we update the Pod version, K8S will automatically load balance instead of deleting all pods and re creating a new version of Pod. It will gradually replace the Pod copy in a robust way, so it is called rolling update.

There are generally two output results:

We can also view the number of updated pod s when obtaining Deployment information:

You can see the number of successfully updated pod s in the UP-TO-DATE field.

You can also view the ReplicaSet and Pod:

How to scroll updates

If our project goes online, we update the software version. If all containers or pods are updated at one time, our software will be unavailable for a period of time until all pods are updated.

Deployment ensures that only a certain number of pods are closed when updating. By default, it ensures that at least 75% of the required pods are running, that is, the proportion of pods being updated does not exceed 25%. Of course, the deployment of only two or three pods will not be limited according to this proportion. In other words, when deployment is in the rolling update state, it can always ensure that there are available pods to provide services.

If the number of Pods is large enough, or the online status is quickly output when updating the Deployment, we can see that the total number of old and new Pods is not necessarily 3, because it will not kill the old Pods until there are enough new Pods. No new Pods were created before a sufficient number of old Pods were killed. When the number of copies is 3, it ensures that at least 2 Pods are available and a total of up to 4 Pods exist (different versions).

The rolling update process is shown in the following figure: 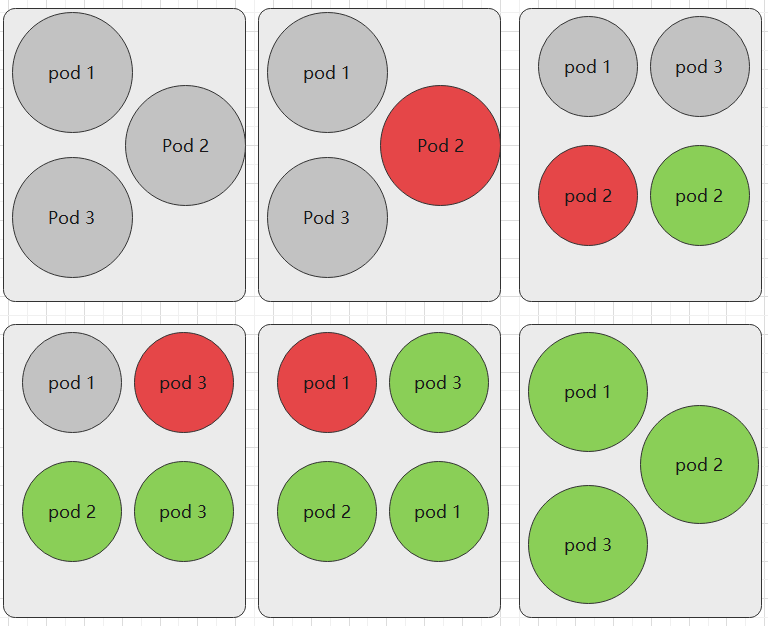 implement   kubectl describe deployment nginx   Viewing the Deployment details, we can also observe the replacement process of old and new pods by viewing the Event field.

However, we don't need to remember these principles and other knowledge, and we don't need to go deep. We can just remember this. We can directly view the documents when necessary. The rules of ReplicaSet will be introduced in detail in the following chapters.

By default, the online records of Deployment will be kept in the system so that they can be rolled back at any time. We also mentioned viewing earlier   kubectl get replicasets   The copy record that appears when.

You can see that there are two versions, but change-case   by  < none>   And? This is because the author did not use it  -- record   Parameter record information, if not brought  -- record   If we look at this historical record, we can't tell what version it is.

Now let's look at the details of version 2:

When a new version of the deployed program finds serious bug s that affect the stability of the platform, you may need to switch the project to the previous version. At present, several commands for viewing the history of Deployment online are introduced. The following describes how to change the Pod to the old version.

For example, if the current version is version 2, it will be rolled back to version 1.

Re execution   kubectl rollout history deployment nginx   You will find that revision has become 3.

The revision records the deployment record, which is independent of the image version of the Pod. Each time the version is updated or rolled back, the revision will automatically increment by 1.

If the number of versions is large, we can also specify the version to roll back to.

Let me mention it here  -- record. Previously, we didn't use this parameter when creating and updating Deployment. In fact, this parameter is very useful. Next, we should bring this parameter every time we execute rolling update.

The number of REVISION field will increase. When we trigger the online action (container label, version, etc.), a new online record will be generated.

kubectl rollout pause   The command allows us to pause the rolling update when the Pod version of the Deployment is.

In the process of rolling update, there will be some phenomena that need our attention.

First create a Deployment or update the Pod of the Deployment to 10 copies.

With maxSurge and maxUnavailable set, the Deployment can replace the Pod more slowly.

Copy the following two commands and execute them quickly to quickly block the online process. After we pause online, check some status information.

implement   kubectl get replicaset   View the number of these versions.

We have suspended the launch earlier. If we execute the launch command and change to another version:

You will find that although the prompt has been updated, it has not actually changed. implement   kubectl rollout history deployment nginx   We can't find the information we submitted   1.19.0   Your request. This is because it is invalid to perform a new online action in the controller object that has been suspended online.

When pausing, we can update some configurations, such as limiting the CPU and resources used by the nginx container in the Pod: